Thomas Jefferson and William Apess, the two very famous personalities, who were first hand witnesses of practices like enslaving people based on their skin colors. Both experienced opposite situations of his human difference. However, Jefferson was one of the people who was part of enslaving people and on the other hand Apess was himself enslaved in his younger years. This is the main reason both share very contradicted and strong views on the issue of enslaving people. Their work “Notes on the State of Virginia” and “ An Indian’s Looking-Glass for the White Man” respectively is clear evidence of that.

Don't use plagiarized sources. Get your custom essay on
“ Religion: The Two Different Perspectives ”
Get custom paper
NEW! smart matching with writer

Despite having different perspectives on the issue of this human difference based on different skin colors, both used a common regime to put forward their arguments in their works, which is religion.

Both Jefferson’s and Apess’s ideas were based on religion, but the way they use religion and God to support their arguments in their texts is still very different.

Jefferson’s argument is entirely based on what he believes. He uses god to explain that the almighty have have all the people, so there must be some reason that some people have different skin color than the others. He also believes that god gave less to the enslaved people in terms of intelligence, and looks. He further compares them with the animals when he explains that if they consider beauty superior aspect in the propagation of animals, then why can not they do it when comparing people with different skin colors.

According to his use of these words, it is depicted that he is using religion as a factor to convince people that god is the one who planned to make them different and gave them different characteristics, so there must be a reason behind all this. According to him god is the one who created the human difference so what is wrong if people do the same. On the contrary, in Apess’s arguments he uses Christian religion and the Bible to argue against white supremacy and ill treatment of people high in power with the Indian Americans and the African Americans people just based on the barriers that were formed by humans not god. He supports his arguments with the versus from bible that God loves with “pure love”. He does not look at the skin colors to judge one’s goodness. According to the text he is trying to convince readers that if god wanted human difference then why would he even create people with different skin colors, why not just the white.

The other strong contradiction that shows how they used religious beliefs to support their views is when both talk about putting a stop to enslaving people, but for totally opposite reasons. Jefferson uses religion and god to put hold on enslaved people just because he thought God gave them less creativity, intelligence and the abilities than that of a white people. He explains further that the practice of enslaving people has to stop, not because of the consequences of God, he explains that it might affect the white children, that they will learn bad things from the enslaves. Even though Jefferson talks about putting hold on the human difference, he is not totally agreeing to abolish it, he wants to build a segregated society where enslaved are kept differently from white people. On the other hand Apess’s uses Bible to convince the readers that the human difference based on their skin colors should be stopped. He also further encourages the intermarriage to be considered fine as it is laws of God that bind people into a holy wedlock. He also exclaims to give the names of some famous Indian and American people who are living examples of this.

It is clearly evident that both, Jefferson and Apess make really good use of religion to support theirs texts. However, From all these contradictions it can be concluded that both, Jefferson and Apess uses religion in a totally opposite manner to upfront their perspectives on enslaving people. One side Jefferson’s arguments appears to be based on his own beliefs where he uses religion as the major tool to provide support to the claims that he made in the text, on the other side Apess’s arguments appears to be based on the facts where he also uses religion to support his arguments but also provide readers some verses from the Bible and challenges to provide some real life examples of the people who were know publicly to give the evidences for his claims. 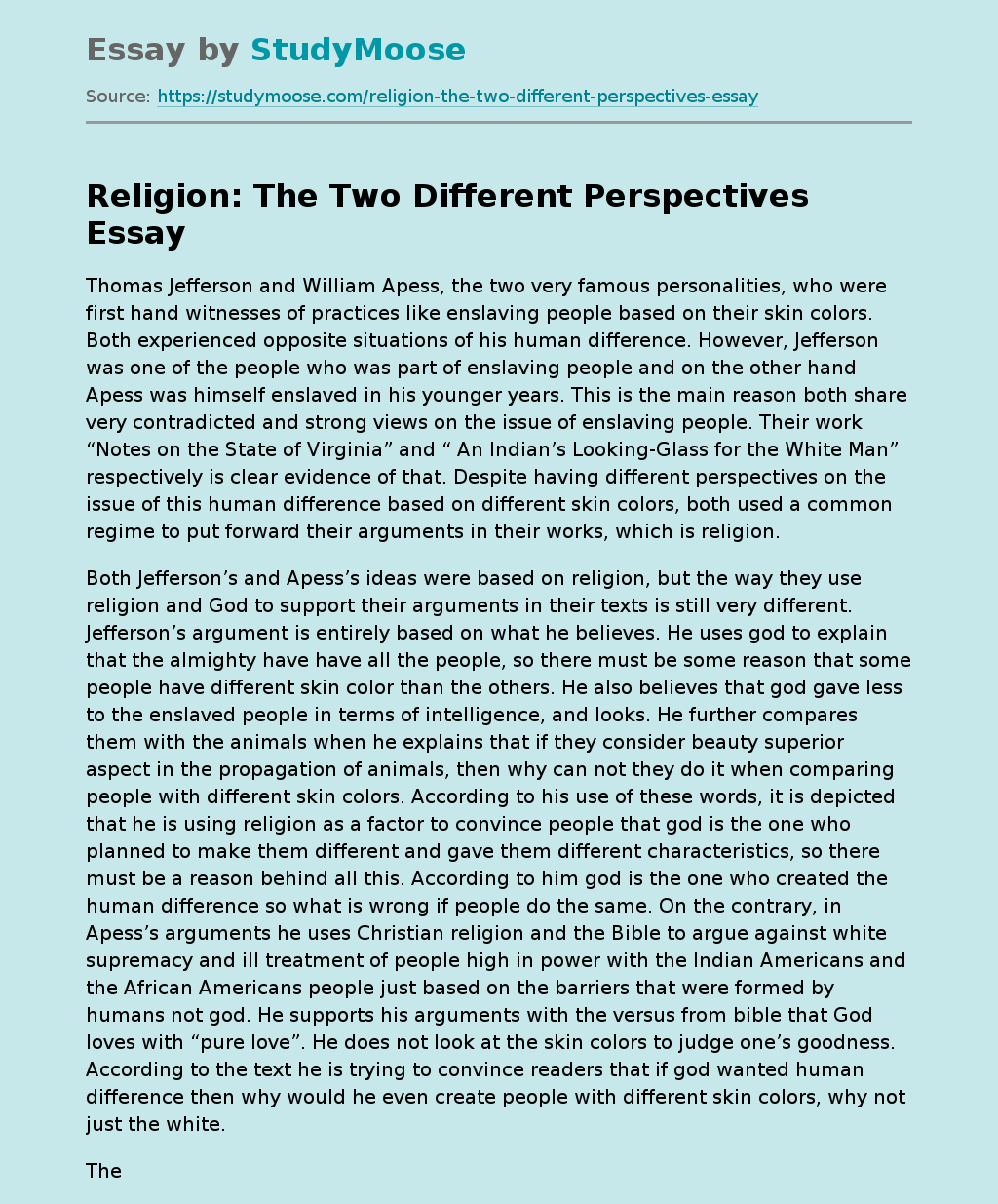