Religion is a very complex concept, as there can be a vast array of different perspectives, views, and values even within one religion. This is evident in Jane Eyre, as the author Charlotte Bronte uses different interpretations of Christianity to criticize various forms of it. The main character, Jane, struggles with choosing between moral duty and fulfilling her personal desires throughout the novel. Over the course of the book, Jane encounters several religious figures, the three main ones being Mr. Brocklehurst, Helen Burns, and St.

Don't use plagiarized sources. Get your custom essay on
“ Religion in “Jane Eyre” by Charlotte Bronte ”
Get custom paper
NEW! smart matching with writer

John Rivers. Each of these three represents a form of religion that Jane ultimately disagrees with to some extent as she comes to her own decisions and understanding regarding her faith and beliefs. While Jane establishes herself as a devoted Christian, she rejects Brocklehurst’s self-righteous views, refutes the monotonous duty-following of St. John, and does not align with the ascetic mindset of Helen. Through the portrayal of these characters and Jane’s interaction with them, Bronte may be highlighting what she believes to be misinterpretation of the meaning and purpose of Christianity.

In doing so, Bronte also alludes to values that she believes truly represent what it means to be Christian.

Robert Brocklehurst portrays a self-righteous, hypocritical view of Christianity, in which he uses religion in an attempt to justify the mistreatment of the children at Lowood. Brocklehurst insists that the students practice the “Christian” virtues of humility and self-sacrifice, preaching punishment of the body to save the soul. He claims his methods serve to rid his students of ego, but his methods of humiliation used to intimidate, manipulate, and control the students are entirely un-Christian.

He deprives the students of proper food and clothing, and even forces one student to cut her curly hair so that she displays humility and doesn’t stand out. Furthermore, while he emphasizes these values as being essential for the children to follow in order to be considered “Children of Grace,” he does not follow them himself. His self-righteous and hypocritical beliefs are displayed when, in the middle of his lecture on appearing humble, his daughters walk in “splendidly attired in velvet, silk, and furs” (Bronte 119). He believes his family’s economic status affords them the God-given right to live lavishly, while the poor children of Lowood must “clothe themselves with shame-facedness and sobriety; not with braided hair and costly apparel” (Bronte 118). This self-righteous view of Christianity directly conflicts with that of Jane’s, who advocates for a Christianity where all are equal before God, regardless of gender, wealth, etc. This is evident when she exclaims to Rochester: “we stood at God’s feet, equal, – as we are!” (Bronte 482). While society does not view Rochester and Jane as equal due to gender and class, Jane is adamant that they are seen as equals by God regardless of their circumstances. Jane’s belief in an equality that is inclusive of all human beings can be seen as the author’s condemnation of the type of “Christianity” displayed by Brocklehurst, as Bronte says herself: “self-righteousness is not religion” (Bronte 3).

St. John Rivers portrays a view of Christianity with blind, unwavering faith. He is extremely self-disciplined and committed to his religious duties, prioritizing faith seemingly above his own pleasure or happiness. He sees only the spiritual side of life, ignoring the physical aspect of human experience. He displays a “strange bitterness; an absence of consolatory gentleness,” suggesting that while he seemingly spends his time as a clergyman hounourably participating in charity work, he does not seem to enjoy what he does (Bronte 673). This lack of enjoyment and passion leads Jane to question St. John’s devotion to Christianity, as she notes that although he is “zealous in his ministerial labours, blameless in his life and habits, he [does] not appear to enjoy that mental serenity, that inward content, which should be the reward of every sincere Christian” (Bronte ). St. John’s proposal to Jane is the quintessential demonstration of his self-abnegated model of Christianity, as he is willing to forgo his personal pleasures and feelings for Rosamond in exchange for his religious ambitions to be a missionary in India with Jane. Jane’s rejection of St. John can also be seen as Bronte’s rejection of this view of religion, as her acceptance of the proposal would have been to choose her religious duties over her true desires. She realizes that while St. John may be satisfied with the reward of going to Heaven, she wants to fulfill her dreams and make her Heaven on Earth, thus turning him down and eventually going back to her true love in Rochester. Through this, the book emphasizes a balance between religion and personal life, rather than one in place of the other.

While Helen Burns is a caring friend to Jane, her submissive and ascetic model of religion is too tolerant of injustice for Jane to accept as her own. Helen represents a form of Christianity that stresses patience and acceptance. Similar to St. John, Helen places full faith in the judgement of God, as she is convinced that “death is so certain an entrance to happiness — to glory” (Bronte 129). She believes it is more important to find happiness in death rather than in life. Because of this, while aware of it, Helen brushes off the mistreatment that she and the others at Lowood have experienced stating “degradation never too deeply disgusts me, injustice never crushes me too low” (Bronte 107). She does not concern herself with the toxicity of her current life, in the belief that she will be rewarded with eternal life after death. In contrast, Jane is unwilling to simply forgive those who wronged her. She feels she “must resist those who punish [her] unjustly… should love those who show me affection, [and] submit to punishment when I feel it is deserved,” showing her belief in standing up to injustice in order to create a better life in the living realm (Bronte 105). Jane’s questioning of Helen’s forebearingness on her deathbed demonstrates Bronte’s criticism of this passive Christian mindset. Jane’s inability to grasp Helen’s ideologies further exemplifies the value Bronte’s places on the human life and advocates the pursuit of happiness in one’s present, rather than waiting for God’s judgement in death.

In Jane Eyre, Charlotte Bronte portrays religion in different characters to highlight what she sees as misinterpretation of true Christian practice. The characters of Brocklehurst, Helen, and St. John each represent aspects of practiced Christianity that Jane does not accept as truly Christian. Brocklehurst’ self-righteous and exploitative views, St. John’s self-abolition, and Helen’s toleration of cruelty are all not accepted by Jane in her view of Christianity. Her spiritual journey leads her to value the equality of all humans, and the balancing of religious and personal desires as two of her main ideals. While Jane develops a new-found understanding of the importance of religion in her life, it does not come at the expense of achieving her life’s personal pleasures and goals. As Bronte’s life in many aspects parallels with Jane’s, it may be possible to infer that she is reflecting her personal beliefs through Jane and the religious views of Jane also represent that of her own. 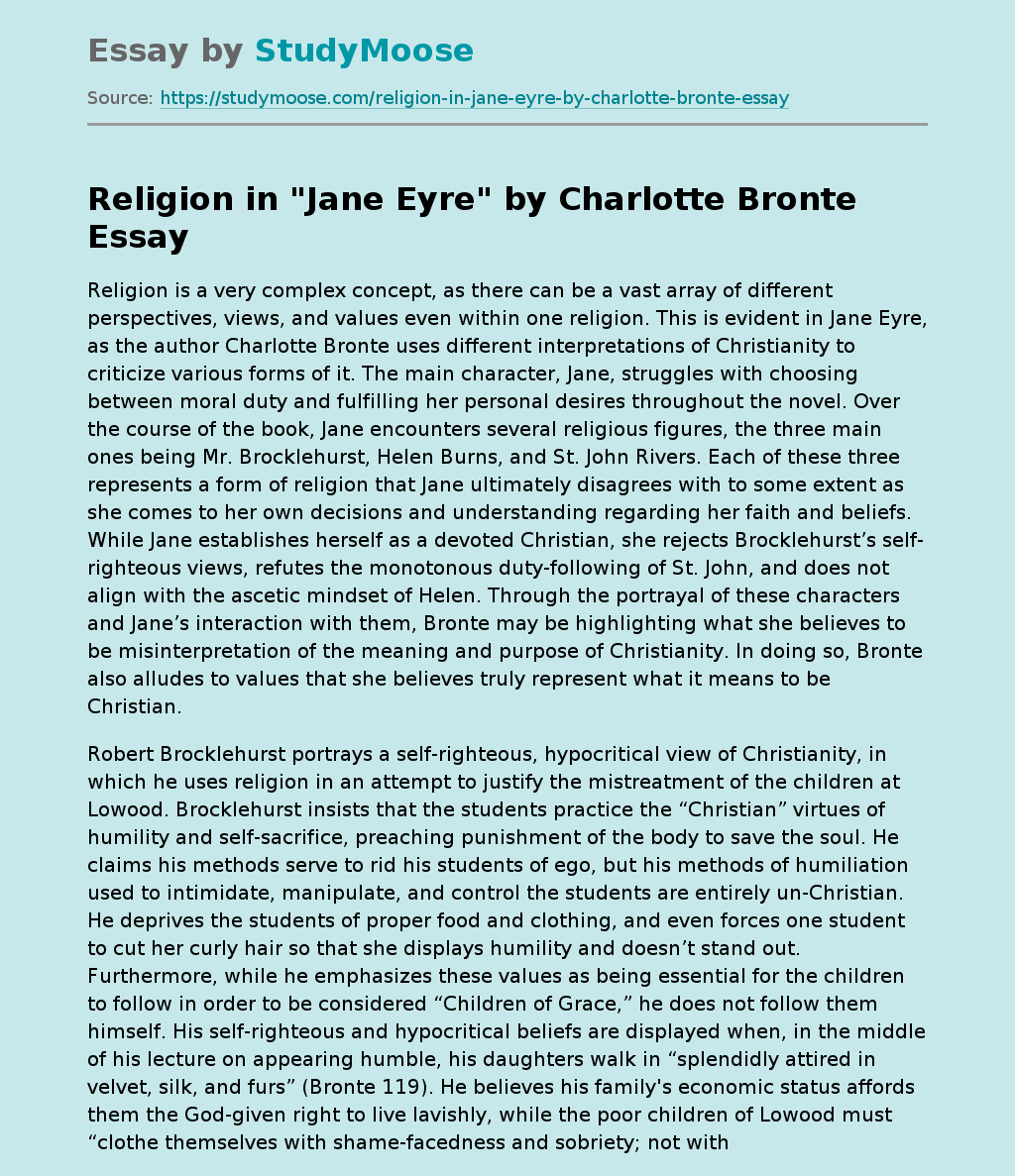