Reflection Paper for Hope of the Flowers

A tale partly about life, partly about revolution and about hope is something kind a general and shallowly standard story to think of it in first. But as the story figuratively moves and builds up, the idea gradually wipe outs. The story that is lovable to children actually grants the older ones the concern to think of the story’s objectives, as well as the perception how well the story can be continued.

Don't use plagiarized sources. Get your custom essay on
“ Reflection Paper for Hope of the Flowers ”
Get custom paper
NEW! smart matching with writer

Because as Stripe was born, his aim was only to grow bigger, but as soon as he wonders that there must be more to life, then he seeks for more satisfactions and purpose in life, being in a caterpillar form where he had really no idea of becoming a beautiful butterfly someday. Just like in our childhood, we are very innocent what can life offer to us.

What the world had already showered upon us, thinking only about happiness and all the good forms in life we can do.

Days go by and by and time passes, we grow older and older and we have a particular goal in life: to gain success, to reach the top. We dream to be someone someday. Just like Stripe, looking around, getting his curiosity work, he found the pile of caterpillars. Even though nobody knows what exactly is up there, it must be faith that made him join to that challenging and unsure undertaking.

Learning to compete with others as Stripe climbs up the top is also truly the nature of humans to satisfy ourselves. We ought to do it and sometimes in bad ways. But consequences are there, we learn from it. And eventually, we could not notice but there was always something on us that has changed.

Along the way up the pile, Stripe meets a caterpillar that has the big doubt of what could possibly be out there. He felt awful to her not knowingly why. And it was possibly love, love that is unexplainable even in the story. The same in the real world they say. That love will find its way to you, in the most unexpected time and place, where everything seems to be a destiny.

But so absurd that there sweetness has fallen out. Stripe had to think back about the pile. Seeking for more purpose in life, going back and questioning himself if he did the right or wrong choices. For Stripe didn’t want to live in regret. Similar to us, for we always look back in the past. We regret for something we did. Our understanding today actually leads to disappointment. But then we realize, that these distresses are to overcome, that we are now willing to take the experience into practice. That something has exchanged for the good of today.

Yellow, in seeking her purpose, met someone who showed her that there is more to life. Though she is more skeptic that caterpillar like her can fly, she was willing to risk everything. She found a role model, , someone who believes in his principles so much that she became convinced that worms like her can reach the sky without crawling all day. I guess in real life that’s just what everyone needs – someone to show them another way of living, another purpose. It seems like people just need someone with conviction, something lacking in us, for us to be motivated and inspired.

Stripe on the other hand was very determined and disciplined in what he was doing. He did not let anyone come in his way. He had to reach the top. But once at the top he still was not satisfied. Sometimes where are just attracted by things that other people are wanting, not realizing that what others want may not be what we want. So after all the hardships, we still do not feel triumphant. We are still not satisfied.

Yellow became a beautiful butterfly. She wanted to share her transformation with Stripe so she visited him at the pile. Stripe saw her but didn’t recognize at first though she felt the immense love coming from her. He suddenly knew what to do. He has to leave everything and follow her. At that point Stripe was undergoing his own transformation. His belief was being transformed. He was being enlightened. As he followed the butterfly, he saw the cocoons hanging. Somehow he knew what he was supposed to do – call it love or faith. He felt he needed to let go of everything which he did. Then he became a beautiful butterfly as well.

For me, the story depicts that the purpose in life was not to be expected; the decisions had to be taken as well as the results it bears. The struggles are main parts of the journey, and finding and believing comfort on others are very helpful to reach the end. Each of us is unaware of the life more than what we expect and imagine for today. We are usually afraid to step back as well as to step forward in our decisions. We evaluate our past and think of the regretful doings we considered in the first place. And each of us is afraid of leaving the present life and state because of some indeterminate things. But because of these, the cycle goes on; we do not rule or dictate the upcoming story, but we make the story to goes on.

Reflection Paper for Hope of the Flowers. (2016, Sep 23). Retrieved from https://studymoose.com/reflection-paper-for-hope-of-the-flowers-essay 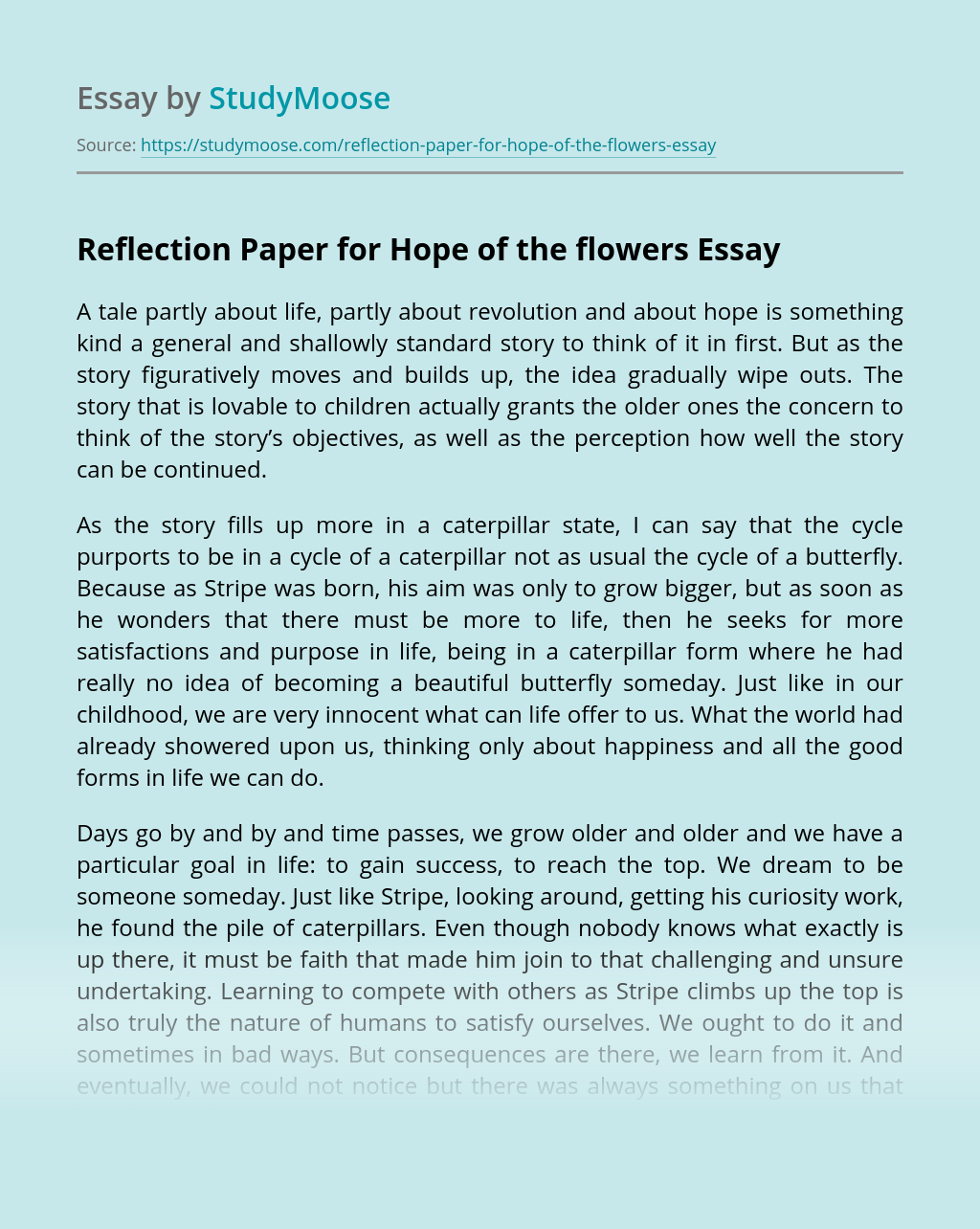