With reference to the empirical literature, critically evaluate whether Kurt Fischer's skill theory provides evidence for a stage theory of development

Skill theory, as developed by Kurt Fischer (1922), stands apart from stage theories of human development-particularly Piaget’s Structuralist theories-in several key ways. Philosophically, Fischer recognised that current developmental thinking was polarized between behaviourists and developmentalists; Developmentalists, like Jean Piaget (1896-1980), overemphasized the role of the child in its development, minimally accounting for environmental factors whilst behaviourists, like B. F. Skinner (1904-1990), overvalued the role of environment in operant conditioning while disregarding the role the individual takes in their own development. For this debate, Fischer chose to focus on skill because it is an aspect of behaviour that both sides of the debate acknowledged as a transaction between an organism and its environment.

Don't use plagiarized sources. Get your custom essay on
“ With reference to the empirical literature, critically evaluate whether Kurt Fischer’s skill theory provides evidence for a stage theory of development ”
Get custom paper
NEW! smart matching with writer

Beginning from a behaviourist approach, Fischer (1980) discusses how all cognition begins with an action that an organism is capable of doing either physical or mentally.

Following this, actions are grouped into sets. This is firstly because to complete a task, it usually requires actions to work in sequence to each other and the action must also be reapplied each time it is used. As an example, Fischer sites how there may be a similar action in how an adult recognizes faces, but the action must be reapplied differently for every different face he or she encounters.

As the result of sets of actions, this creates skills which are a single unit of behaviour made up of one or more sets.

Fisher cites Jerome Bruner (1970) for including in his theory that skills are contextual and specific to a task at hand. During the time Fischer was considering a theory of development, skill was a term used synonymously with capacity, ability and competence. The problem Fischer identified with skill being used in this way was that skill is different in that it that the person and the environment must be in the same place at the same time to produce the action. For example, a person can have skill at baking but cannot bake without the environment of a kitchen with an oven. The issue Fischer took with Piaget (1936/1952) was that, skill cannot be generalised across all people due to the environmental changes involved. Therefore, when Piaget refers to scheme, intelligence, capacity, concept, competence or ability, Fischer (Fischer & Yan, 2002) noted that the terms did not possess the same meaning as skill.

Building upon this, Fischer then organizes skills into skill levels and tiers. Levels representationally show qualitative changes in how skills are organized, particularly in complex activities (Fischer, 1980). Fischer differentiates himself from Piaget firstly in stating that the activities of children are not evidence for clear ladder-like ascension through phases; there is vast variation in the activities of children which shift and change dependent upon the environment the child is in at any given moment. Therefore, while development may occur within an approximation to age, skill development is not as dependent upon age inasmuch as it is the current environment. What skill levels do show that phases of development do not is qualitative changes in how skills are organised-particularly in complex activities.

Lastly, skills theory is also different from stage-type theories of development in that the skill levels are used to organize a child’s, skills but not the child personally. Due to the variation in environment and the variation of individual cognition for each individual child, it should be expected that everyday skills will be performed at many different skill levels. Therefore, Fischer suggests that if skill theory is to be applied to a particular child, a cognitive profile will need to be produced. Having appreciated individual differences in cognitive profiles, Fischer does acknowledge that the most pronounced changes in organization do correspond with Piaget’s primary circular reactions, secondary circular reactions, tertiary circular reactions, representations, concrete operations and formal operations (1936/1952) and semi-logic (Piaget, Grize, Szeminska & Bang, 1968, as cited in Fischer & Yan, 2002).

Resulting from the research of levels, Fischer groups them into a series of four tiers. Tiers were initially identified by Fischer because of “dramatic changes” (Fischer & Yan, 2002, p. 485) in the second year of age regarding the level of skill utilized for representational (or pretend) play. An example of this representational play would be how a child plays with a stuffed bear; when a child sets a stuffed bear in his bed on a pillow, covers it in blankets, and states, “Bear is sleeping,” this demonstrates several systems coming together to produce a new skill. The systems in this example would be the action system for manipulating the bear and the action system of sleeping.

Between four months and roughly twelve years of age, Fischer identified seven levels and then after discovering a system of tiers, he defined a further five levels of skill preceding into infancy and following from roughly ten years of age into adulthood. These twelve levels are then grouped into three tiers which demonstrate different skill developments: Sensory-motor sets, representational sets and abstract sets (see Table 1). Differentiating himself again from Piaget, Fischer is fast to state that just because a skill is demonstrated crossing into the new tier, this is only relative to the skill itself and not the overall development of the individual child or across children as a whole. It is very likely that the child in question will display skills that do not cross into the new tier either because the environment has changed or transformation of the skill has not occurred. Referring back to the previous example, the child may have produced representational play because he had the stuffed bear in his bedroom, but the skill might not be produced again if the child is given a different toy and a room with a sofa instead of a bed.

With reference to the empirical literature, critically evaluate whether Kurt Fischer's skill theory provides evidence for a stage theory of development. (2020, Jun 02). Retrieved from https://studymoose.com/reference-empirical-literature-critically-evaluate-whether-kurt-fischers-skill-theory-provides-evidence-stage-theory-development-new-essay 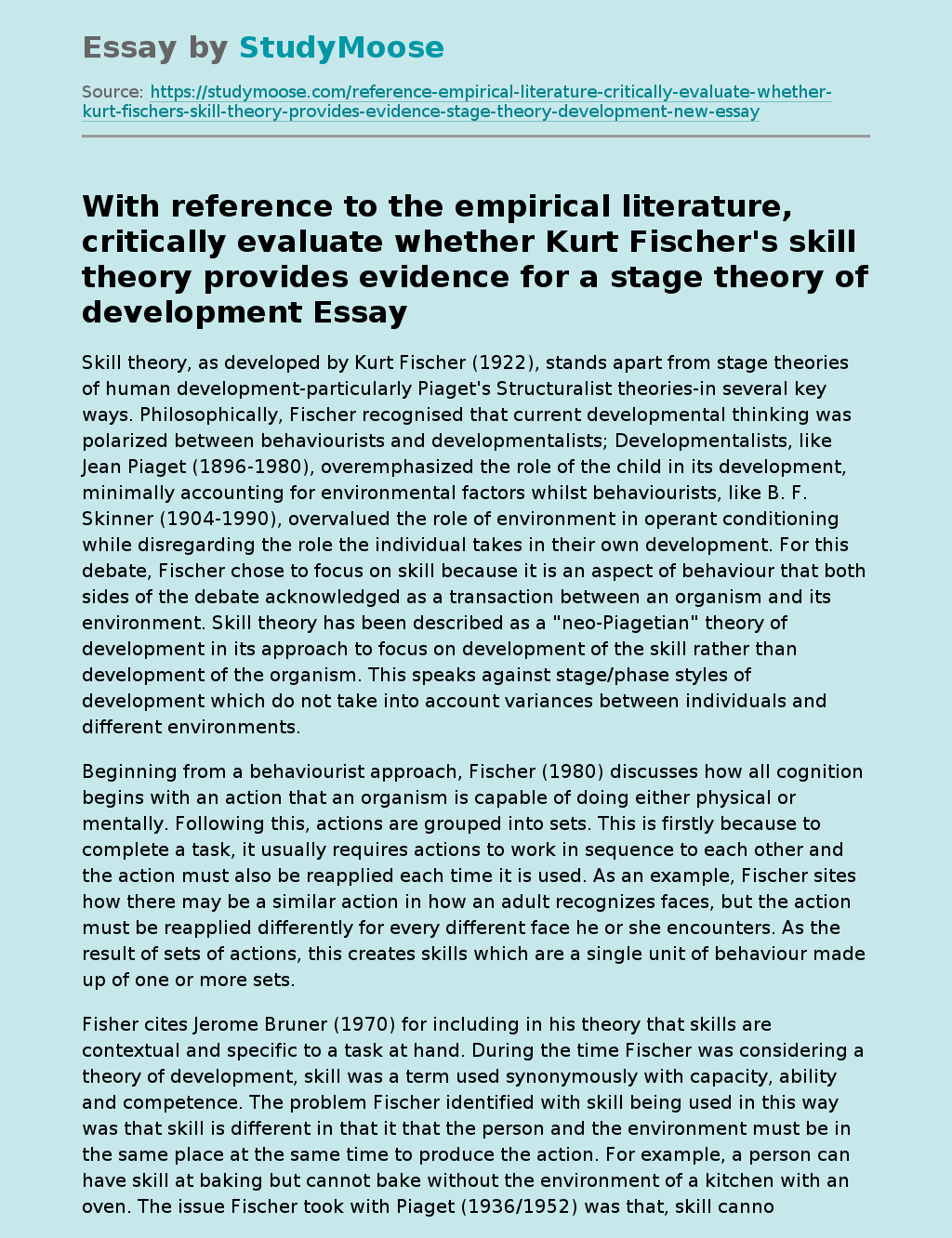