Many people would agree that without faith, the world would be in chaos. The book Christian Foundation by Kathleen Fischer and Thomas Hart gives an interpretation on faith in our time. Many people would question the definition of faith. Faith is a gift, which is given by God to have trust in him and belief in him. This book is a great entry in anyone’s life that has speculation on his or her own faith. The book has many ways into understanding ones own religion.

Don’t waste time
Get a verified writer to help you with Christian Foundations By: Kathleen Fischer & Thomas Hart
Hire verified writer
$35.80 for a 2-page paper

It discusses the Bible, Jesus, Church, God’s existence and Images of God. All of these chapters helped me get a better interpretation of what my religion entailed.

To understand God you must first get a decent understanding of the bible. The bible has been translated from the original languages of Hebrew, Greek and Aramaic. It now exists in every language known to man. It also remains to be the best selling book in the world.

In the book they ask the question, “Why is this book so important?” (Pp. 47). Well to fully understand that question, you have to know what the bible entails. The bible is divided into two major parts, the Old Testament and the New Testament. The word Testament means covenant. Both books are extremely different. However, they both help develop a better understanding of faith.

The Old Testament is composed of six historical books, three Major Prophets, twelve Minor Prophets, thirteen writings and seven books of the second canon. These books are all part of a revelation unlike any other.

The Old testaments purpose is to give us focus. God wants to reveal what we could never discover on our own. It also gives us heroes who helped believers see that God did exist. One major story, that everyone has probably heard a million times, is the story of Moses. Moses is recognized for the saving of his people from Egypt. The Old Testament also shows how God created the world and how he wants us to act in his world.

In the New Testament the main focus is on the four gospels, which take place in the life span of Jesus. It is written by four disciples of Jesus, Matthew, Mark, Luke and John. The New Testament focuses on Jesus’ life, how he was sent to be our Savior, his healing miracles and teachings of his father. The first three gospels show a huge resemblance to each other. They are called “synoptic gospels”. The book defines this as being able to line them up in parallel columns. The fourth gospel by John has a character of its own. He only has about eight percent of synoptic material. John is set to be the only one of the four to have a distinctive interpretation of Jesus. The book uses this example when John describes Jesus’ washing of the feet at the last supper. John’s description of the last supper goes on for five chapters, enabling him to be the most distinctive.

Another great part of this book is the breakdown in the importance of Jesus. Jesus has great significance in religion. To me, Jesus is the key element to understanding religion. He was very different from other heroes in the bible. For Jesus is the essence of a major part of religion’s creation. He has been called other names such as Christ or the Messiah. Jesus was sent by God to deliver us from evil. Through Jesus’ preaching, he stated that he was the reign of God that had been sent to be our savior. He was executed for political charges of Blasphemy by Roman authorities. Blasphemy is claiming the power of God. He was crucified through Pontius Pilate, who was convinced that Jesus was harmless, and gave his people a chance to declare Jesus innocent.

Under the pressure of the crowd, Pilate sends Jesus to his death. Jesus was crucified with an inscription over his head that read ” Jesus of Nazareth, King of the Jews”. After his death, he was laid to rest in the tomb of a wealthy friend. The real revelation takes place a few days after his death where he is seen alive by many witnesses and individual groups of people who grieved his passing. People who witnessed his resurrection believe that God raised him from the dead to be glorified, and that his message was to be preached to the ends of the earth. Jesus’ death was an act of love that represents his final testimony to his trust in the faithful and loving God he proclaimed as his father.

The beginning of church is said to have risen from the resurrection of Jesus. In fact after the Pentecost, the disciples were celebrating the blessing given to Moses at Mount Sinai in which he experienced the presence of God. After this experience, the disciples were believed to be bold, understanding and Courageous. These characteristics till this day are still celebrated on Pentecost Sunday and are used for the sacrament of Confirmation, which is receiving the responsibility of a Christian and accepting the Holy Spirit. Church has been the backbone of people’s faith. It has given them a comforting home to pray and be one with God. Today, however, more people are practicing faith outside the church. The majority of followers believe in God and life after death, however, many have lack of interest in the church.

Church must be looked as a community of disciples. The book uses a suggestion from a Roman Catholic theologian Avery Dulles. He suggests, “that most appropriate image of the church for our times is the church as a community of disciples”(pp. 157). I totally agree with his suggestion. In order for Christians to find fulfillment in ones faith, one must help others understand their faith. We need to be grounded in grace; by being a Christian community your focus on believing is responding freely to a personal call and reminds us that we ourselves are the church. Church should be places where any one could feel comfortable praying and receiving Christ.

It is so amazing to know that even at an early age you believe in God. We start believing in the existence of God as early as the age of two. As we get older and realize the other eras in life that have occurred, such as science and other advancements, we start to develop curiosity and doubt. We have the desire for questions to be answered. Is there truly a greater life out there for me? Does God truly exist? There are three beliefs in God atheism, agnosticism, and theism. Atheism is the belief that there is no God. Agnosticism is a person who simply doesn’t know if there is a God. And last but not least, theism, which is a person that believes that God does truly exist.

Although there are many evidences that God exist, there are many hints in which lead to an existence. Some examples of God’s existence are the testimony of Conscience, where we feel ourselves bound by certain moral obligations (pp. 21). It’s interesting when we obey them how we feel at peace. We don’t feel guilty or troubled in any way. Another example is time, in which the Hebrew scripture’s record a period of almost 2000 years (pp. 22). We have seen countless generations of various circumstances and belief in the same God. Faith in some people is so recognizable that it has made an extreme impact on their lives.

Images of God come from the fact that no one has ever physically seen God. Although many people have claimed to experience God, he remains a mystery. Jesus shared images of God with his disciples when he preached but never gave a description of his appearance, which leaves us to use our imagination. He just paints pictures by presenting images of action. Biblical images of God are presented in two different aspects theologians have used personal ones, which are masculine and Feminine. In a masculine image God is presented as a King, Lord, Warrior, Master and a Judge, and Father, which have all predominately been traits of a male. When they describe God of a feminine image, they present God as a women giving birth. Sometimes the Holy Spirit and Christ are reflected in female images as well (pp. 34). There are also impersonal images where God is described as a rock, shield, fortress, water, mountain, light, or as a great protecting bird.

Reading this book gave me a great explanation to my own faith. Some of my own questions were in the book and helped me answer them clearly and concisely. Recently I have found doubt in my own belief. In fact coming to the realization of that, it is very natural for a college student to have doubts in their own faith. It gave me hope that one day I will understand religion. Religion must come naturally and can’t be forced on any individual at any time. The sad thing is that the majority of the time people instill faith and interpretation on individuals, thinking that this will bring them salvation and peace of mind. However, it leaves people confused and doubtful. The book made me see that each individual will have their own quest for meaning and purpose of their own faith.

When you read this book you will also know that the understanding of God will not only come out of one book and that Jesus’ life and teaching is an on going challenge and process of interpretation. As you grow the meaning of certain scriptures become different. Every time you read the bible you will incorporate a new meaning or a new interpretation. The bible reflects our own life and destiny. Therefore it becomes inevitable that any person will read the bible and get the same meaning. God made us all to be different and that I guess is his true acknowledgment to us. Individuality!

In conclusion faith is the most important part of religion. Christian Foundations helps you see what faith is, it helps develop and answer your own struggles in religion. And gives you a balanced foundation of what being a Christian entails. The book is very clear reading and is very knowledgeable. It will help you see a new light in the path to God and his existence. In order to live productive religious lives, one must have spiritual guidance and wisdom. I believe this book is a great first step to this challenge. 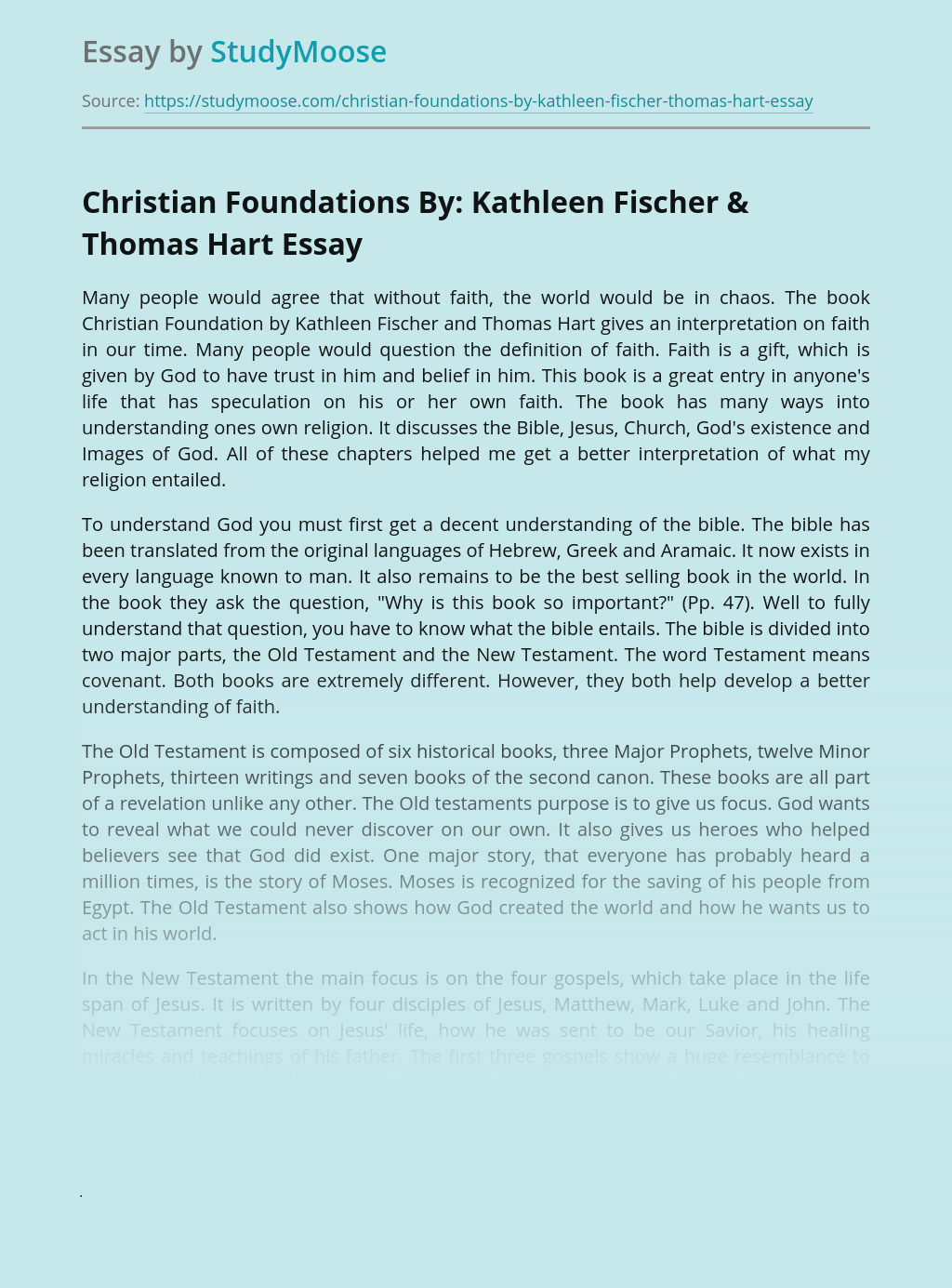