Reality TV vs. Real Life TV
One of the main sources of news and entertainment is television. Every household has a television set in their home which the family consumes hours watching. Many reality TV shows are based on shallow and vague values. The growing trend in television now for our culture is “REALITY TV” (real life on TV). Just like the appeal to junk food or the internet reality TV has a dominant effect on our children and us as adults.

Don't use plagiarized sources. Get your custom essay on
“ Reality TV VS Real Life TV ”
Get custom paper
NEW! smart matching with writer

There is real life and there is TV-life under influence of which viewers fall. Under the name of “Reality TV” viewers expect something as “real life on TV”. But while reality TV may seem like a harmless form of entertainment, the damage (which is done so subtly) is very powerful and therefore it deserves a closer look. So the question is ‘Do we really need another reality TV show or perhaps it’s time for a reality check?’ “Reality television is a genre of television programming which generally is unscripted, documenting actual events over fiction and featuring ‘ordinary’ people over professional actors.

” . Reality TV has appeared following the creation of television broadcasting in the 1940s.

What we know of as reality TV now started with such shows as “Candid Camera” (1948). Reality TV programs are rapidly developing and gaining more and more popularity changing contents of the programs according to time changes: participants become more opened to the viewers—which attracts constant interest to reality shows. The most popular reality TV shows today are: “The Bachelor”, “Who Wants to Marry a Millionaire”, “Survivor”.

All over the world, on multiple TV-channels, millions of people are watching the products of reality TV. Reality shows are covering most valuable aspects of life: family relationships, love, and money. The main purposes of those shows are either fun, or competition amusement. So here is the true reality behind reality TV. Reality TV, which is in the business of making us feel good rather than be good, actually contributes to the growing problems in our society by celebrating human weakness rather than human excellence.

Reality TV doesn’t empower us, but rather overpowers us by taking our innate power and inner knowing and spirituality away from us, leaving us feeling insecure, inadequate, less fulfilled, isolated and confused by virtue of the promotion of anti-social behavior, excessive self-indulgence, self-entitlement, greed, compromised integrity, obsession with winning at all costs, and erosion in morality. All reality shows have their own level of gossip, some more than others. The Housewives series are known for carrying with them a swirl of scandal ranging from cheating husbands, missing child support and even suicides. Courtroom shows like “People’s Court” and “Divorce Court” also brings drama to viewers as cases of divorce, property damage and landlord negligence lead to explosive episodes of screaming matches and much mallet smashing. Although none of us wish to be tied up in such hairy messes and sticky situations, it is amusing to watch others battle it out in what can be considered no less than a complete display of trashy behavior.

We like to know what is going on behind closed doors and if it involves some type of controversy, that just makes it all the more intriguing. The Real World is often created with being the first reality tv show, but you can go back even further to the Fifties when Candid Camera first aired. It was a show of regular people put in adverse, funny situations and we got to see how they reacted first hand. We love Candid Camera. It ran in some form for fifteen seasons, spawned countless other shows (America’s Funniest Home Videos, Kids Say the Darndest Things and the latest, Punk’d) and will probably come back in some form in the future. Americans also love game shows, which can be compared to reality TV shows. We love to watch people win or lose fortunes within thirty minutes and see how they react to that and each other. Perhaps Dr. Annette Hill, a researcher at the University of Westminster put it best when asked by BBC News why reality TV shows were so popular – “”We found that, in general, people like to see what happens behind the scenes.” Some shows, such as Deadliest Catch, give us a glimpse into something we might never know about such as the dangerous lives of crab fisherman. Reality TV is at times so utterly fabricated that viewers can’t help but enjoy a different “reality” from their own.

Whether you favor watching reality shows of the rich and famous, the survivors, or the love birds, all anyone wants is an escape from what becomes a monotonous routine. If from such outright mind-numbing shows we can gain either steadfast motivation to become wealthy ourselves or simply affirmation that we are not as screwed up as we think (compared to the nut-jobs on the screen), then I think the hour of reality TV is well spent. Of course, everything looks better through a clear window. So, if you have to watch reality TV smut, at least watch it on any HD service really.

You can see all of their REAL wrinkles and cellulite! So what does this actually say about our American culture? Some may believe that our culture can be naïve and nosey. We enjoy looking into others lives and personal business as and use to their real life dilemmas as entertainment. It’s also fair to say that we are a culture that enjoys other people’s drama. The more fighting and arguing the show has the more we want to watch it. There are critics who judge reality TV and their arguments are worth of attention. Contemporary reality shows are harmful for what they teach the audience. There is an emotional abuse when certain participants fail to win, there is a psychological trauma on the side of viewers when something happens not as they have expected. Physical beauty is presented to be more important than cleverness and intelligence, feelings and emotions are common. If reality TV is so popular, why does most critical commentary regard in a negative light?

Traditionally, documentary is considered a “sober” genre with a strong tradition of social commentary, while reality TV is seems as a trivial one. However, the increase of new hybrids formats blurs this idea finding documentaries based on entertainment and reality shows based on social issues. “New hybrid versions of documentary and reality television produce a new kind of public sphere in which shared knowledge and the experience of the everyday take centre stage”, Reality TV has broken the boundary between private and public. Audience wants to feel the guilty pleasure, a voyeuristic experience, of feeling part of ordinary people’s lives and them demands to watch it on television. According to Baudrillard, this idea is based on “a kind of primal pleasure, of anthropological joy in images, a kind of brute fascination unencumbered by aesthetic, moral, social or political judgments” . We have always been interested in other people’s lives because they are a reflection of our own lives, our own ordinariness. Baudrillard suggests that images “are immoral, and that their fundamental power lies in this immorality.

When you consider the magnitude of the challenges that are facing America today, it becomes obvious that what we need is certainly not another mind-numbing reality TV show, but rather a good reality check. Whether we recognize it or not, America is in desperate need of healing and true revival. It needs a jump-start, not only in the economy, but most importantly a jump-start in the spirit. After all, we are only as strong as our spirit, because when the spirit is weak it’s easier to become overwhelmed by what life throws our way. But when the spirit is strong, no turbulences can affect us, much like a ship in the vast ocean that can sail smoothly as long as there are no holes in it to make it sink. America could use a reality check if only to reexamine our value system, which is out of balance and has led to social ills and failing systems and institutions. In a conflicted state of uncertainty, doubt and fear, it’s only natural for people to feel overwhelmed, wishing to escape from reality.

However, reality TV proves only an artificial relief. It’s obvious that we are looking for love (real joy, fulfillment, meaning and purpose) in all the wrong places. In a culture that demands instant gratification, and relief from everyday anxieties, a quick fix (for coping), seems to be the chosen drug of choice. So now for that reality check; the reality is that the prevailing mentality in American society today is ‘more is better,’ acquiring external riches as opposed to internal riches and that you can get something for nothing.

There is a sense of entitlement and an expectation of wanting the good life without having to work hard for it. This is reinforced, glorified and perpetuated by the media with shows like ‘The Lifestyle of The Rich and Famous.’ When all you see is glamour, but not the hard work and sacrifice that goes into achieving success, it only inspires more envy and the desire for a ‘get rich quick’ scheme leading to the erosion of morality and integrity. 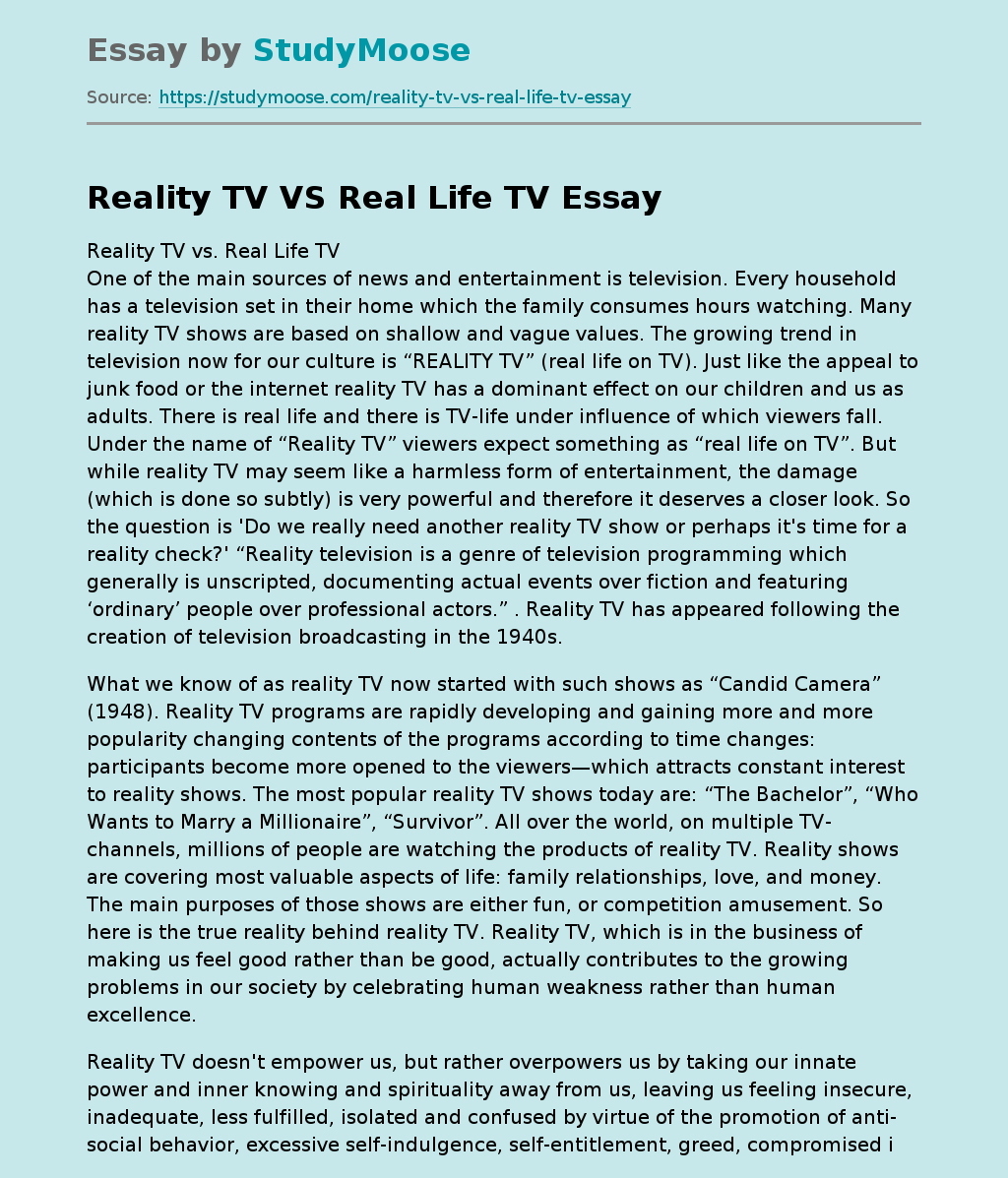