Reality TV stimulates the economy
The Reality TV industry produces a stimulus for the economy. “If I pay a reality star 1/50 of what I’d pay Johnny Depp, my return is going to come back much quicker,” said Mark Young, a professor at USC’s Marshall School of Business.

Judge, this is obviously a huge good that come out of reality TV. CNN reports that reality TV decreases unemployment rates in the US. “Career Makeover, a new series that promises to tap into the frustrating low points of millions of today’s out-of-work and underemployed Americans.

Don't use plagiarized sources. Get your custom essay on
“ Reality Television Does More Harm Than Good ”
Get custom paper
NEW! smart matching with writer

The show will give viewers something that’s perhaps more telling than the government’s eagerly-awaited monthly employment report.”

According to Washington Post, winning big on a reality television cooking show has helped catapult the careers of even established chefs. As Geoffrey Zakarin, a food network iron chef, stated “TV is the gigantic tide that lifts all boats”

Advertising is also a huge factor since
Tens of Millions of people watch reality TV- TIME
Advertising….as most know occurs during the show in the middle of small
breaks between the show. Heres the twist. Reality TV has advertising inside the show.

New York Times—->It is typically easier to weave a product into an episode of a reality show like “American Idol” or “Survivor” than into a scripted series like “Grey’s Anatomy” or “Two and a Half Men.” Lets give an example. Lets say there is a family in a reality tv show using a vacuum cleaner.

The actors in the reality tv show would compliment the cleanliness of the vacuum cleaner and this is a form of advertising.

Oregon State University—-> 23 million tuned in “Multi-Millionaire” and 51 million watched the finale of “Survivor”. This was an advertisers dream. This is why we see advertisers paying $2.1 million for sponsorship on “The Mole” The initial “Survivor” sponsors paid $4 million but “Survivor 2” price tag jumped to $12 million (Friedman, Harsh ‘Reality,’ 2000:4 & Grover, Off the Island, 2000: 48). How do the networks benefit? CBS collected about $52 million in advertising for the initial “Survivor” (Grover, Off the Island, 2000: 48). ABC’s “Millionaire” brought up it’s operating income by 33% (Lacter, “Blair Witch TV, 2000:64).

The impact is that reality TV not only creates jobs and boosts employment rates, but it also boosts the economy and businesses through advertising.

2. It helps society
Reality TV is an easy way to make money and stimulate the economy. It costs very little to run and It is cheap. It gives oppurtunities for many of the unemployed. As we said in our 1st contention, Career Makeover is giving oppurtunities. We have to take advantage.

These shows teach others how to do different things.
For example, Yankee Workshop teaches about building and constructing. American Idol and America’s Got talent shows the love of music.

The Impact is that If you lose, you got an opportunity and if you win, you win an oppurtunity. According to Martha Airth-Kindree, executive director of the Mile Bluff Medical Center Foundation, “Scores of people have been inspired by “The Biggest Loser”. ” The popular reality television show is the inspiration for a new weight-loss program in Juneau County

According to an article written by Dr. Michelle Golland, a mental health professional, she believes that reality tv can be a good thing. As she states in her article, the shows “Intervention” and “Obsessed” bring us into the lives of people suffering with mental health problems, drug and alcohol addiction, and obsessive-compulsive disorder. “Intervention” helps treat people who seek help on the show and also pays for their treatment, which many of them may otherwise be unable to afford. It also allows us to witness the damage inflicted on every person in an addict’s life and the devastating impact on them. This show can help those who view it to realize they need help, or encourage a family member to stage their own intervention with the help of a professional, which they may never have had the courage to do until watching it on TV. “Obsessed” is a painful display of people who have severe anxieties and are seeking treatment for them.

The impact is that Reality TV helps society by helping the economy, teaching different things, inspiration for better health, and showing the world the lives of those with health problems.

Contention 1: The sheer number of reality programmes is now driving TV producers to create filthier, more corrupt reality shows. Reality TV is actually getting worse as the audience becomes more and more used to the genre. In a search for ratings and media coverage, shows are becoming ever more vulgar and offensive, trying to find new ways to shock. When the British Big Brother was struggling for viewers in 2003, its producers responded by attempting to shock the audience that little bit more. “Big Brother” programmes have also shown men and women having sex on live TV, all in a desperate grab for ratings to justify their continued existence. Others have involved fights and racist bullying. Do we let things continue until someone has to die on TV to boost the ratings?

Contention 2: Reality TV encourages people to pursue celebrity status, and discourages the value of hard work and an education. Reality shows send a bad message and help to create a cult of instant celebrity. They are typically built about shameless self-promotion, based on humiliating others and harming relationships for the entertainment of each other and the viewers at home. These programmes suggest that anyone can become famous just by getting on TV and “being themselves”, without working hard or having any particular talent. Kids who watch these shows will get the idea that they don’t need to study hard in school, or train hard for a regular job. As John Humphrys points out, ‘we tell kids what matters is being a celebrity and we wonder why some behave the way they do. As American lawyer Lisa Bloom fears, ‘addiction to celebrity culture is creating a generation of dumbed-down women. Reality shows encourage such addictions and promote the generally misguided belief that they should aspire to be the reality stars they watch on their televisions.

Contention 3: Reality shows make for bad, lazy and corrupting television, encouraging such behaviour in society. They mostly show ordinary people with no special talents doing very little. If they have to sing or dance, then they do it badly – which doesn’t make for good entertainment. They rely on humiliation and conflict to create excitement. Joe Millionaire, where a group of women competed for the affections of a construction worker who they were told was a millionaire, was simply cruel. The emotions of the contestants were considered expendable for the sake of making viewers laugh at their ignorance. Furthermore, the programmes are full of swearing, crying and argument, and often violence, drunkenness and sex. This sends a message to people that this is normal behaviour and helps to create a crude, selfish society. One American reality show, “Are You Hot?”, in which competitors submit to a panel of judges for ‘appearance-rating’, was blamed by eating disorder experts as encouraging the notion that ‘appearance is the most important.

Contention 4: Reality TV is dishonest – it pretends to show “reality” but it actually distorts the truth to suit the programme makers. The shows are not really “real” – they are carefully cast to get a mix of “characters” who are not at all typical. Mostly they show a bunch of young, good-looking self-publicists, who will do anything to get on TV. Usually the programme makers try to ensure excitement by picking people who are likely to clash with each other. They then place them in unnatural situations, such as the Big Brother house or the Survivor island, and give them strange challenges in order to provoke them into behaving oddly. In The Bachelor, where a group of women compete for the affections of an eligible male, the ‘intimate dates’ they go on are filmed in front of any number of camera; that is not reality (Poniewozik, 2003). Finally the makers film their victims for hundreds of hours from all angles, but only show the most dramatic parts. Selective editing may be used to create “storylines” and so further manipulate the truth of what happened. 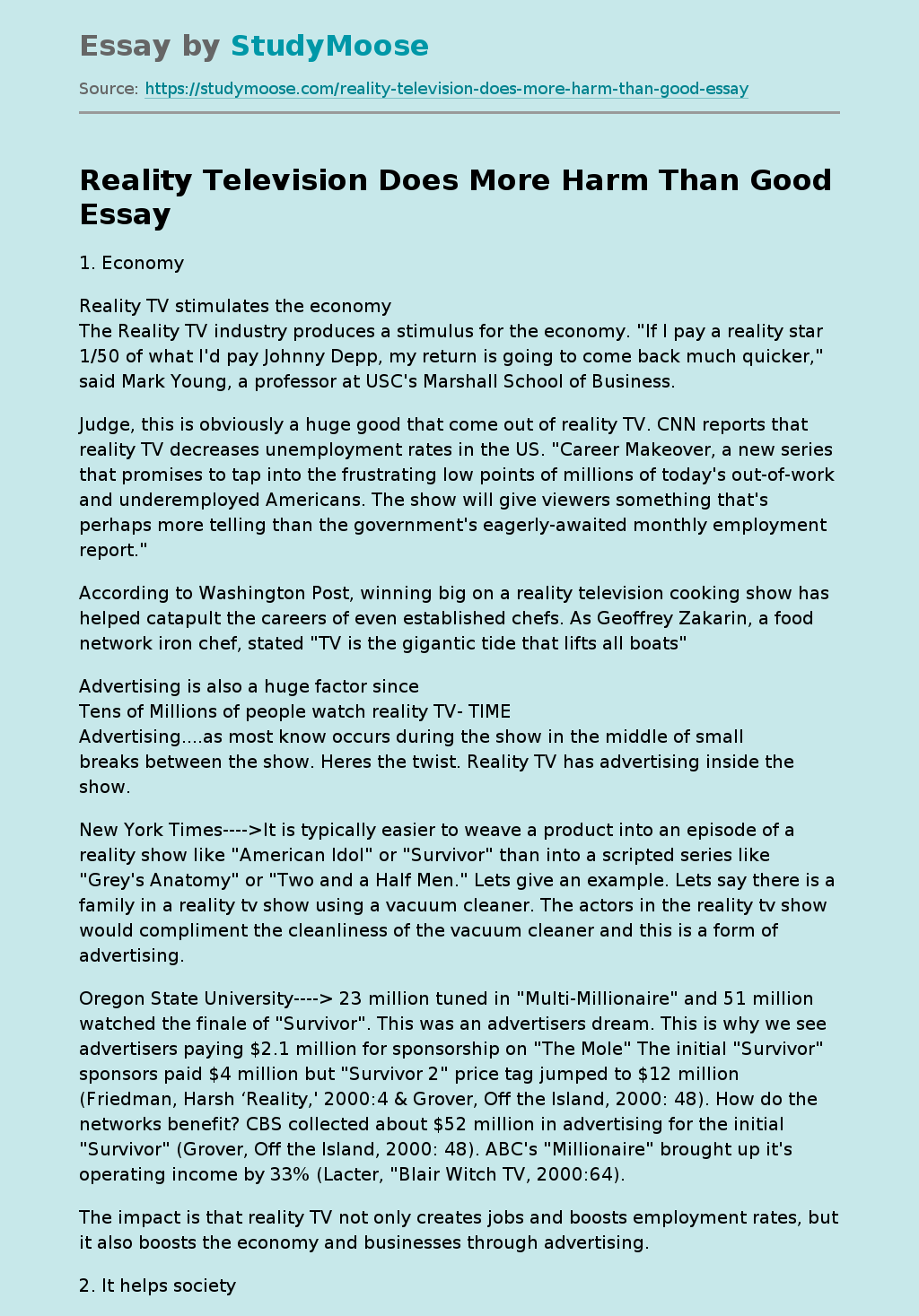