Ronald Reagan’s Challenger Tragedy Address “Sometimes, when we reach for the stars, we fall short. But we must pick ourselves up again and press on despite the pain.” The following quote was said by Ronald Reagan to 6,000 NASA employees and 4,000 guests 3 days after the space shuttle Challenger disaster occurred. January 28th, 1986 the Challenger was taking off for its 10th mission. Approximately 73 seconds into the flight the shuttle broke apart and fell back down to Earth, killing all 7 of its crew members.

Many people, including young school children, actually witnessed this happening on live television broadcasts. That night, Reagan was scheduled to deliver the State of the Union address. Instead, in order to reassure both the public, families of the victims, and NASA personnel, he changed it so that it was a national address on the subject of the disaster. Due to his high credibility, his appeal of pathos and logos, and his strong image when he presented the speech he was successful in comforting the nation in the midst of this tragedy.

One of the most important elements when it comes to making a speech successful is that your audience trusts the person delivering it, establishing logos.

Reagan certainly had credibility with the people of the United States at this point in time and that is what helped to make his speech so effective. Reagan was in the middle of serving his second term as President when this tragedy occurred. Overall, Reagan served 8 years (1981-1989), and this alone shows us what kind of man the people of America thought he was.

They believed in him and trusted him enough to run our country for two terms. Reagan had a lot of political background before he even became the President. His roles as both governor of California for 8 years and soldier in the army for 7 years also helped his credibility. People saw him as someone responsible, and someone that only had other’s best interests at heart. He did many good things as president that were for the peoples’ best interest and knew what he was talking about. So when he stepped out to say that after the tragedy everything would be fine and they would continue on with missions to space, everyone believed him and supported his decision. Overall, his ethos was vital in order for his Challenger address to be successful in calming the nerves of America after what they had just witnessed.

Reagan’s most effective element about his speech was by far his ability to be straightforward with his audience, but sympathetic at the same time. First and foremost, the fact alone that Reagan cancelled his State of the Union speech just so he could deliver this speech and make the American people feel better gives his speech the edge it needs before he even delivers it. He then demonstrates pathos by consoling the public in times of tragedy, however he also connects to his audience in order to show them he might as well of been one of them as he heard the news of the Challenger exploding. He starts off the entire address by talking about how he and his wife are “pained to the core” by the tragedy. He says, “We know we share this pain with all of the people of our country. This is truly a national loss.”

He used so many effective words to connect with the people. By using the words “pain” and “share” he associates himself and his wife with everyone else in the nation, both children and adults that witnessed the tragedy. But then, by saying it is a national loss he again points out that as a whole (with him at the top) it has affected many people. He also speaks directly to the children in the nation that watched the tragedy live. He delivers this part with a different tone that lets the kids know this message is different and only for them so that they may be consoled. Overall, he makes the speech deeply personal, yet not exploitive, in order to better identify with his audience so that he may consol them. Lastly, Reagan’s strong demeanor while presenting his speech was the finishing touch he needed to truly connect with the people.

He took the tragedy into his own hands right when it happened because he knew that it was his duty to say something in order to calm the country. Just taking a stand alone shows he was strong. Hearing that one’s president changed his State of the Union to a tragedy address the very same day it happened shows how important the situation is to him as well. Even though Reagan was probably pretty shaken himself because of the accident and the fact that he was now in charge of comforting millions, he stayed strong with his presentation and did not let his emotions get the better of him.

Instead of giving up and saying that because of these deaths NASA should stop the missions, he said, We’ll continue our quest in space. There will be more shuttle flights and more shuttle crews and, yes, more volunteers, more civilians, more teachers in space. Nothing ends here; our hopes and our journeys continue. His driven attitude helped the American people know that this tragedy was not the end of the world, but rather, just something that they needed to mourn and get through in order to keep working towards the future. Altogether, Reagan kept his composure and stayed professional in a time of tragedy in order to consol the people of the United States.

This speech is considered one of the greatest addresses in history. Reagan was able to show sympathy towards the families of the departed to connect with his audience and also reassured the people at the same time through his professionalism. Because of this speech Reagan is ranked among our top presidents and will forever be someone so respected that others look to his legacy for guidance. 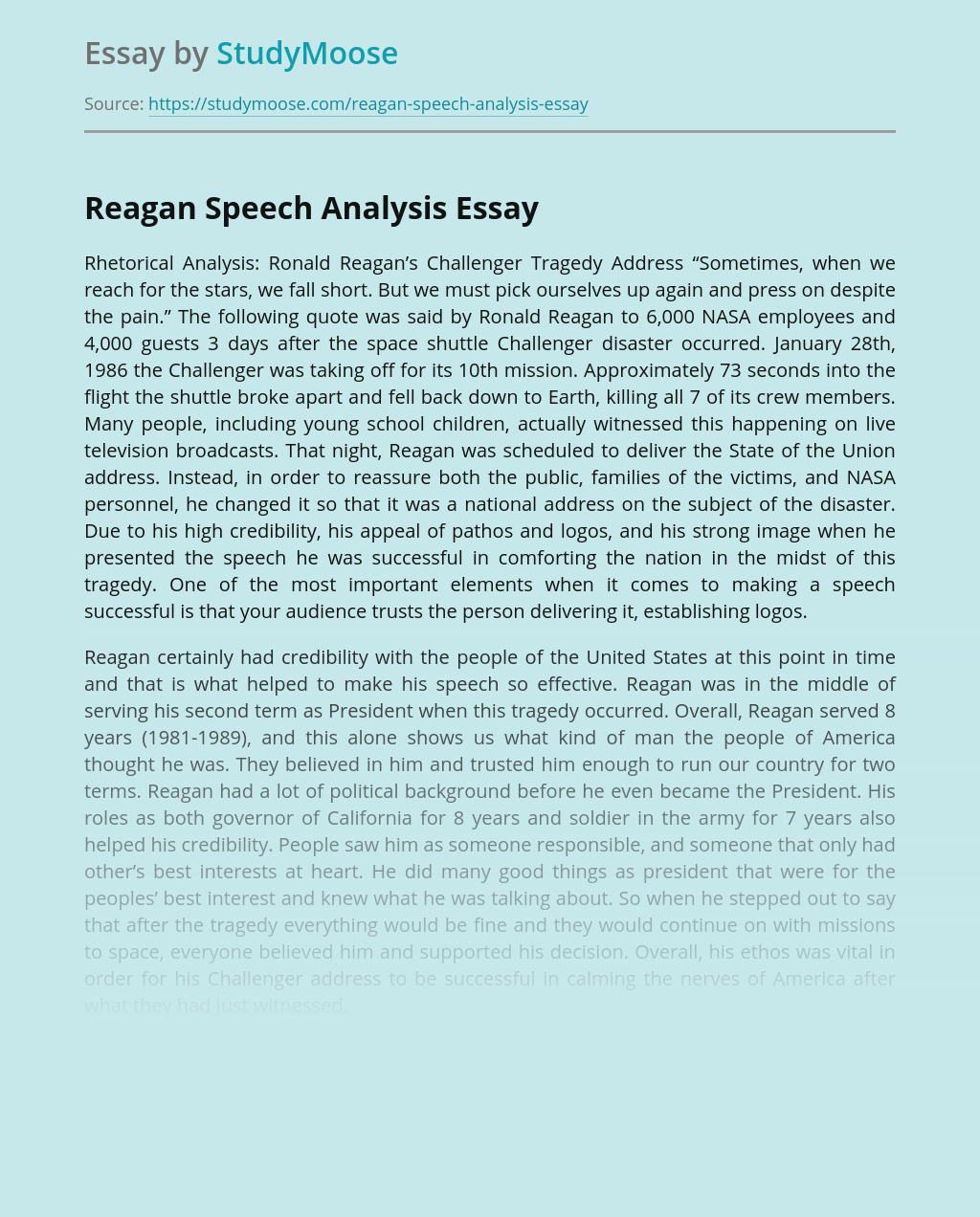