In his book, In Cold Blood, Truman Capote brings to life the harsh realities of a true story experienced by the Clutter family of Holcomb (part of Finney County, Kansas). He elucidates the anticipating work of the investigators and the imprisonment of the vicious murderers of the Clutter family. In the third section of the book, the events leading up to the murder, the actual murder and the events that took place after the murder are described with meticulous detail by the murderers themselves.

Individuals of our age obviously know that murder is a horrendous crime and has very strict penalties.

Murder is an issue that is reported in almost every day’s headlines. It is an issue that society should be informed about and it is something that society is significantly afflicted by. The theme of In Cold Blood, deals with various issues, for instance, lying, theft investigation, fake checks, suicide and murder. Murder, being the most prominent issue in this story, has various interconnected forms linked to it.

These various forms of murder take place in society everyday and thus the reason why I think this issue is important to society. The murder committed in this book is a cross between robbery-gone-bad type murder and unmotivated murder. In my opinion, Dick Hickock and Perry Smith did not need to murder the Clutter family; instead, they could have just left the family after they discovered that there was no money in the Clutter household.

By reading this section of the book, I have also learned that Perry Smith was the one who committed all four murders, one by one, while Dick remained as his silent partner.

Another important fact that I have learned about people in today’s world is that looks and first impressions can be very deceiving. For example, an account of Mrs. Meier stated, “And I decided – well he wasn’t the worst young man I ever saw. That night after I’d gone to bed, I said as much to my husband. But Wendle snorted. Wendle was one of the first on the scene after the crime was discovered. He said he wished I’d been out at the Clutter place when they found the bodies. Then I could’ve judged for myself just how gentle Mr.

Smith was. “(254). While some people sympathize with Perry, most of the townspeople had pessimistic and cynical opinions of Perry Smith and Dick Hickock. Personally, I think I know enough about society to believe that every individual’s actions have a reason behind them. I have learned that people who tend to commit appalling crimes such as murder have either had bad past experiences/influences or are mentally unstable. In my opinion, everyone is motivated one way or another to do what they do.

For example, someone who is flat broke or doesn’t have much to live for would be more enthused to commit a crime or take part in other unethical acts. I believe that the issues discussed in this book are extremely evocative to society. I think that by writing this book, Truman Capote wanted readers to have a better understanding of human nature and the circumstances that induce us to behave the way we do. In his book, Truman Capote gives the reader various examples of human nature and the activities it instigates us to engage in.

This differentiation gives the reader an insight on another aspect of human nature, blame and denial. These qualities of human nature are found in every individual, whether they want to admit it or not. Personally, I believe everyone behaves the way their nature incites them to. The structure in which the author writes certain parts of the novel signifies their importance and implication to the subject of the novel. The chapter in which Perry confesses is very long and detailed and can also be considered as the climax of the novel. It is told in the present tense, while the rest of the book is narrated in the past tense.

This sequential alteration highlights the significance of the chapter. The confession is a climax because it represents the end of the mystery and chases that occupy the police for most of the novel. Throughout, it is clear to the reader that Dick and Perry killed the Clutter family, but the details are unclear. In this chapter, they are revealed along with the motive of the murder. The murderers were hoping to find a safe full of money at the Clutter home which they do not find thus it is confirmed that the murder is a robbery-gone-bad type murder.

I think that this book’s issue, murder, is very meaningful to society. Murder is a crime which is committed everyday in our society. By writing this novel, I believe the author provides us an understanding of the reasoning behind such horrendous actions. Everyday, people are murdered and everyday, investigators prowl the crime scene looking for clues. This book just takes a scrutinizing look at one of these million murders, hoping to give society a better understanding of it. 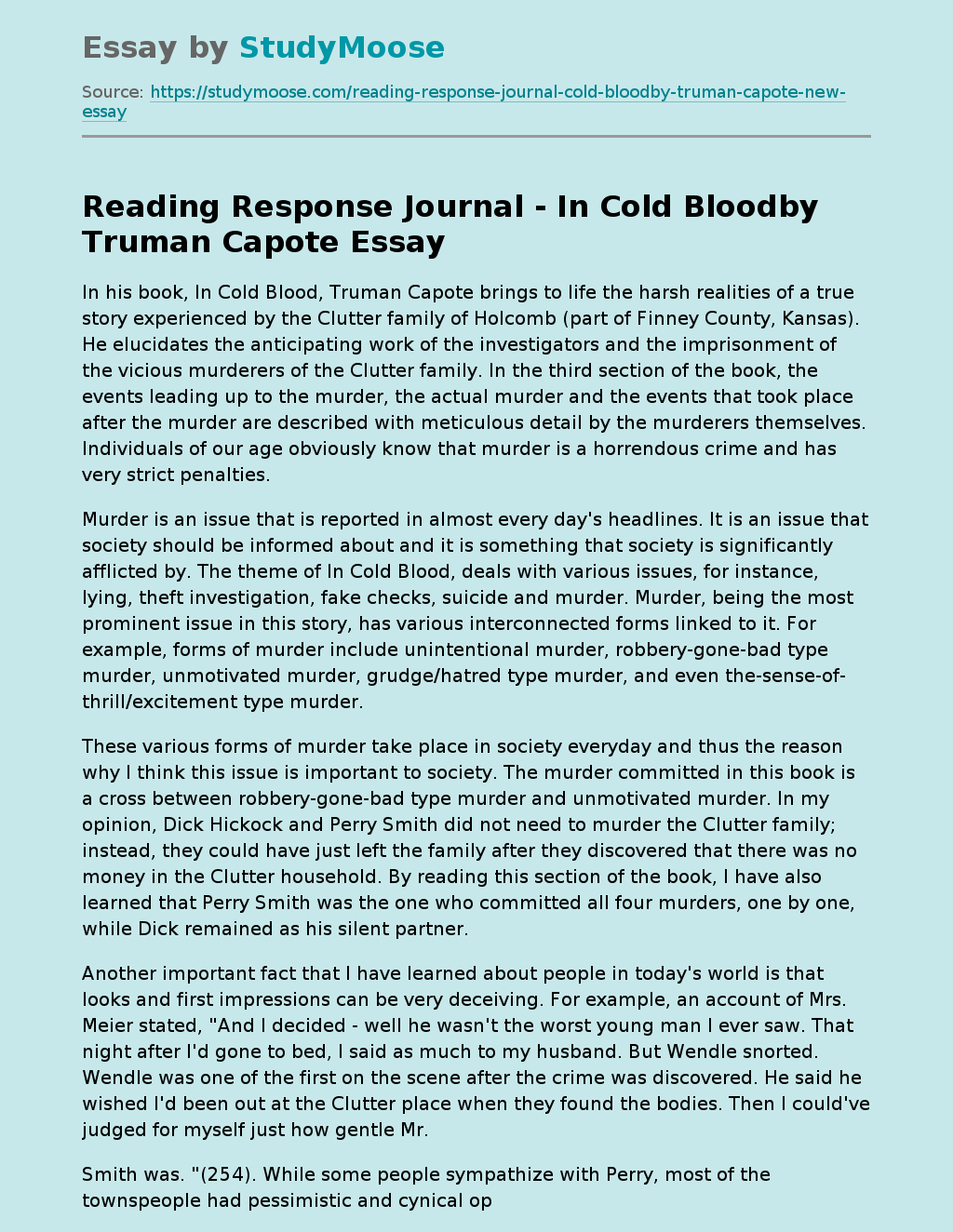