Reaction Paper on Prejudice and Discrimination

The world that we live in today, although improving, is tainted with cruelty and hatred toward different races. Usually, we have stereotypes about people who are members of groups with which we have not had firsthand contact. We regularly make these stereotypical generalizations based on experiences we have had ourselves, seen in movies or television, read about in books and magazines, or have had related to us by family and friends. Though all these are equally significant roots for the stimulation of stereotypes, media however, is a giant force.

Turn in your highest-quality paper
Get a qualified writer to help you with
“ Reaction Paper on Prejudice and Discrimination ”
Get high-quality paper
NEW! AI matching with writers

When thinking of the topics or behaviors of prejudice and stereotyping, I synonymously think of the movie “Crash,” which exposes different kinds of social and multicultural differences, giving a quick example of how these conducts can affect a society. These behaviors are viewed as thoughts and feelings that almost everyone has felt more than once. In the first scene of the movie, a Muslim man inside a firearm store is attempting to buy a gun.

The owner is a white Caucasian male that presents a negative attitude towards the customer because of his Muslim background.

This feeling triggers in the owner, negative attitudes based on the assimilation and stereotypes with the Muslim race. Being immediately associated with the Al Qaeda terrorist group, which was responsible for suicidal bombers that have killed thousand of Americans. This negative attitude and violence observed in this particular scene, is an example of prejudice, known as a negative feeling and predisposition of behavior towards a group or any member belonging to that group.

This is an issue not only found in America but in the whole world. In our global economy requiring functional and respectful relationships between nations, prejudice and stereotypes can be a destructive force both in the world and in individual societies, especially in diverse ones. Acting on ones hatred can lead to behavior to what we now in days call “hate crime”, such as in the scene where they break into the Muslim’s man business and vandalize the place completely.

Such acts can lead us to many disgraces even death. This movie shows us the different point of view of people in our society, it gives us an insight of the stereotypes we have build within our society, within the world. It invites us to see and understand how such a small stereotype and negative attitude can go a long way and affect people in different ways. Prejudice is found between gender, religion, cultural, geographical background, and race.

People have discriminated against others based upon these attributes. Besides, prejudice is largely a function of ignorance. Today, there are so many different people in this world that stereotypes are almost always incorrect, as many people choose not to be followers, but to be individuals. Asians, African-Americans, Hispanics, Caucasians, and all other ethnic groups need to look past each other’s physical characteristics and start looking inside a person to see who they truly are.

After all, personalities do not lie on the outside of one’s body, but in one’s mind. I believe that society needs to raise today’s children to accept all people, no matter what they do or do not believe in or what color skin they may have. In order to reduce prejudice and discrimination, it is considered that education for children is very important. For example, exchange student program that includes not only the one between different countries but also the one between different communities within the same area.

If children are raised around people who are not the same as they are in school or community, then they will most likely not think anything different of people who do not look the same as them or believe what they believe. If humanity raises their children to believe all people are equal from the beginning, then prejudice will slowly disintegrate over time. The world needs to focus on not judging people before they know them for who they are. It is very important to let children have opportunity to know the differences and to be interested in differences because ignorance is the biggest source of prejudice.

Reaction Paper on Prejudice and Discrimination. (2017, Jan 19). Retrieved from http://studymoose.com/reaction-paper-on-prejudice-and-discrimination-essay 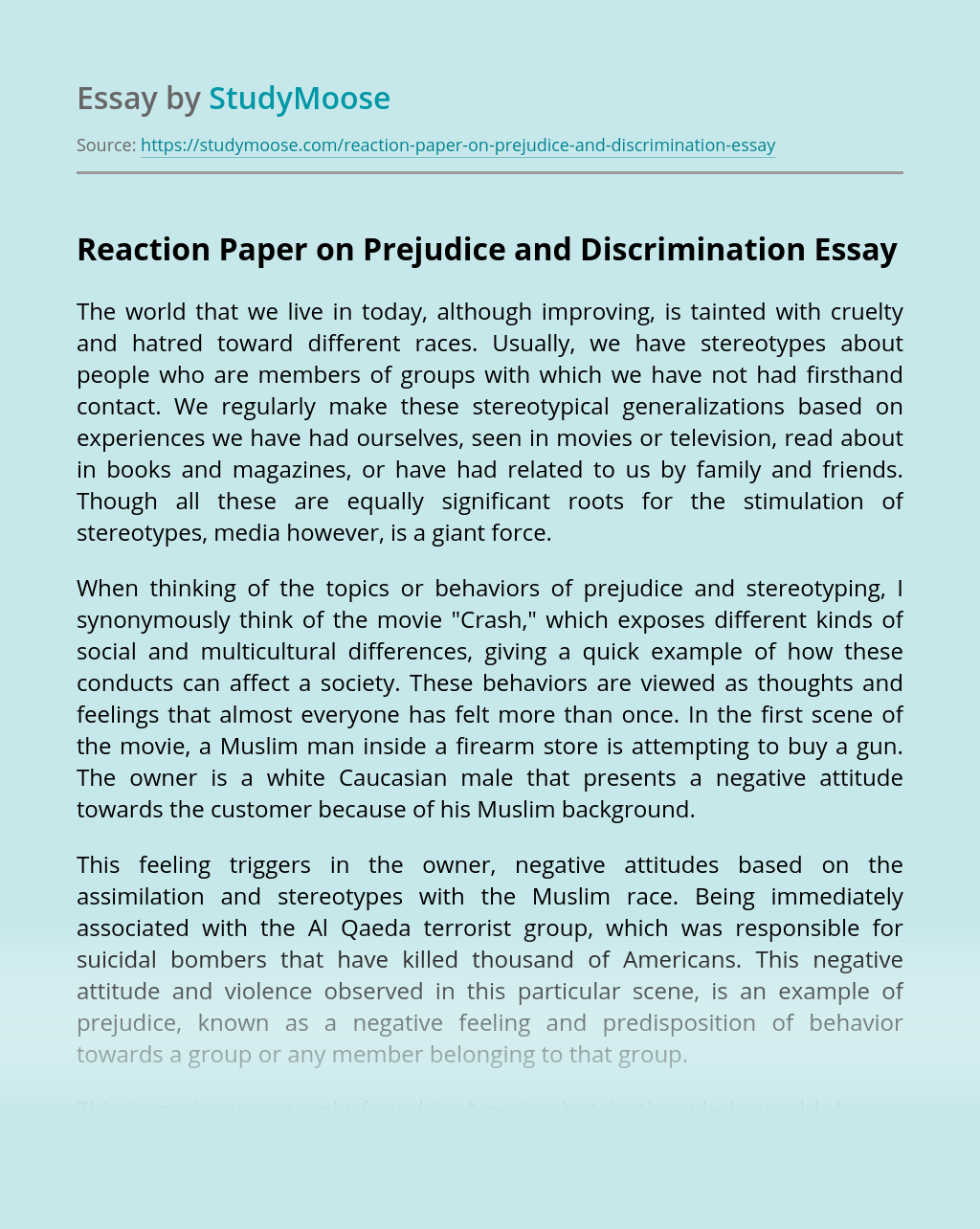 Turn in your highest-quality paper
Get a qualified writer to help you with
“ Reaction Paper on Prejudice and Discrimination ”
Get high-quality paper
Helping students since 2015
Stay Safe, Stay Original