Virgilio “Gil” Bustamante (as played by Jake Cuenca) was a commissioned of Department of Health (DOH). He weaves a tale that combines various stories of people infected with the virus, using the San Lazaro Hospital. Among those having their story told are heterosexuals, homosexuals, prostitutes and drug users. The film focuses on three major characters; Heidi, Ivy and Vanessa. Heidi is an ordinary housewife who contracted the virus from her husband. She was abandoned by her family and no one of her family member talks to her.

Don't use plagiarized sources.
Get Your Custom Essay on Reaction Paper for the Movie “HIV (Si Heidi, Si Ivy at Si V)” Just from $13,9/Page

Her neighbor calls her prostitute and they looked disgusted on Heidi. She suffered from the bad effects of HIV.

When she died her son, Victor who is also a HIV patient was nourished by his grandmother. Ivy, a young call center agent discovers that she is HIV positive when she tries to apply for work Canada. Her plans for a new life abroad destroyed, she must now face the world, her work, family, and friends with a mistake from her past.

Vanessa, his real name was Victor ,a cheerful young gay, and stand-up comedian who engages in different sexual pleasures with multiple partners. He, with his very supportive parents, are willing and eager to shares his story. Though he has find subjects for the documentary, still, it becomes harder for him to meet the deadline because the subjects are indecisive who can’t make up their minds about sharing their stories in public. So, with an emanating deadline, he runs after his subjects and as he gets too busy working for the documentary.

Gil was obsessed to finish his documentary even if his some subjects are died and back-up and it was the reason why his girlfriend Miles, broke up with him, he still continue to finish the documentary. He learns that the fight against HIV/AIDS demands responsible action form individuals.

This movie is not just any other movie that neither brings entertainment, chills nor threatens. It is far better of informing the youth through interesting stories with almost all possible chances a person may suffer thru time. I find it very helpful and it gives a lot of knowledge in the youth. Many of us learned from this film. It informs the youth in such a way of making each of them see themselves through the role of every character in the film and figure out, with their own understanding and knowledge, the message that the film ought the people to know and understand. That is, to respect each and every person living in this world because after all, nobody’s perfect. We are all entitled to be make mistakes and thus we should feel free in making mistakes. We should never judge anyone because we only knew what they’ve done or what they’re going through yet, we never knew the true story behind all of those.

I find myself similar to Gil Bustamante because Just like Gil, I am determined to share every piece of me with all of humanity if in this way, I can help every person to improve the way they live, the way they see life and the way they fight for it. Just like Mr. Bustamante, I believed that what has to be done. I will also sacrifice just to finish a documentary like that because I know that in that way, I can help many people.

I was stricken by the fact that the V in the subtitle of the film (Si Heidi, si Ivy at si V) stood not for Vanessa – but for Virgilio “Gil” after all. This part made me understand why Gil doesn’t want to make love with her girlfriend because he loves her, trying to protect her, since the start. And I am very glad because even though Gil was afraid for admitting that he is also a HIV positive he admitted it. Because he knows that it can help to the youth.

If by chance, that I have been in Gil Bustamante’s place, I will also do, even exhausted, by all means to finish my own HIV/AIDS documentary because I know that I can help a lot of people. I will not be shy if I have that virus because having that virus is not my intention. 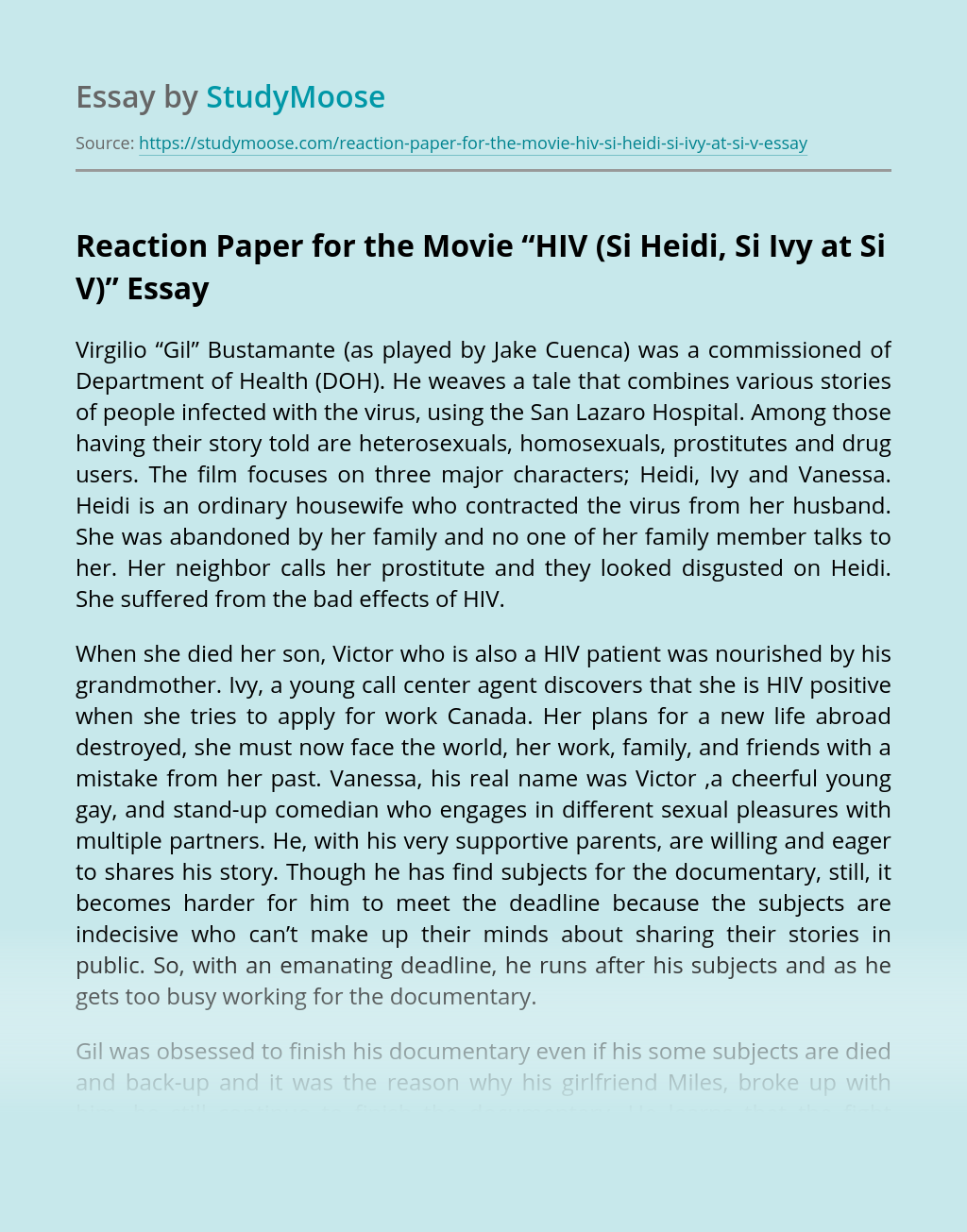 This is an ethical review of the film Wall Street (Stone and Weiser). It examines ethical issues Bud Fox dealt with and what made him susceptible to crossing the ethical line, along with what factors led to Fox’s attempt to repair the ethical breach. It examines Gordon Gecko’s ideas on an individual’s vulnerability to making... VIEW ESSAY

Sometimes perfection can be perfect hell.” Utopia: the seemingly perfect world, one that combines happiness and honesty with purity, equality and peace. However, in George Orwell’s novel, 1984 and The Truman Show, readers and viewers are presented with a clever contradiction, dystopia. In both 1984 and The Truman Show, there are dystopia. Both the novel... VIEW ESSAY

Out in a middle of nowhere, a man rides a horse in haste as if it were chasing after something. This is the common image of the cowboy that we have all become familiar with. In fact, it is next to impossible not to recognize the image of the cowboy because it is so powerful... VIEW ESSAY

In this political cartoon, “The Security Blanket” sketched by Eugene Payne (speaker), an Army veteran that later became an award-winning cartoonist, gave his thoughts over the Great Debate over gun control (subject) through this cartoon. The occasion surrounding this topic is the gun control in the US. This cartoon was directed towards the people (audience)... VIEW ESSAY

It Happened One Night set the location for the “screwball” funny, the witty and romantic clash of characters between a man and a lady mismatched in both character and social position. Through one of the biggest romantic comedies in movie history, Frank Copra reveals the outlandish nature of the rich and the nature of man... VIEW ESSAY