It was an exciting day because of the basketball game held last January 28 2012 in Mapua’s gymnasium. The game was in accordance with the commemoration of the founding anniversary of the institute. It was a fight between the present Mapua basketball players and the ex-cardinals. It was a game between yellow team and red team. The yellow team was composed of Madrid, Palomique, Espinosa, Cinco, Alcantara, and Sta. Maria. The red team who were the Mapua Cardinals include Jimenez, Ranises, Pascual, Mazo, Bernales, Guillermo, Co, and Del Rosario.

Don't use plagiarized sources.
Get Your Custom Essay on Reaction paper Just from $13,9/Page

It was an exciting game from the first to the last quarter of the game. Each team has the determination to win especially the Mapua Cardinals when they struggle to earn more points in the two last quarters of the game. The red team had a hard time in the first two quarters of the game but they instantly regain their lead as one of the team shot three-points. There was also an instance wherein the team amazingly got two consecutive three-points which enables them to a one point lead.

The last minute of the game gave us the turning point of the story where the ex-cardinals (now struggling to get points), show an intense game play but failed to get any points. The Mapua Cardinals (red team) win by the score, 119-118. This was actually a very exciting game because every player is surprisingly giving the audience a very intense game especially the part when the score was tied. I’m hoping for future games like this, very exciting and suited to be part of the founding anniversary of the institute.

Reaction paper. (2016, May 19). Retrieved from https://studymoose.com/reaction-paper-5-essay 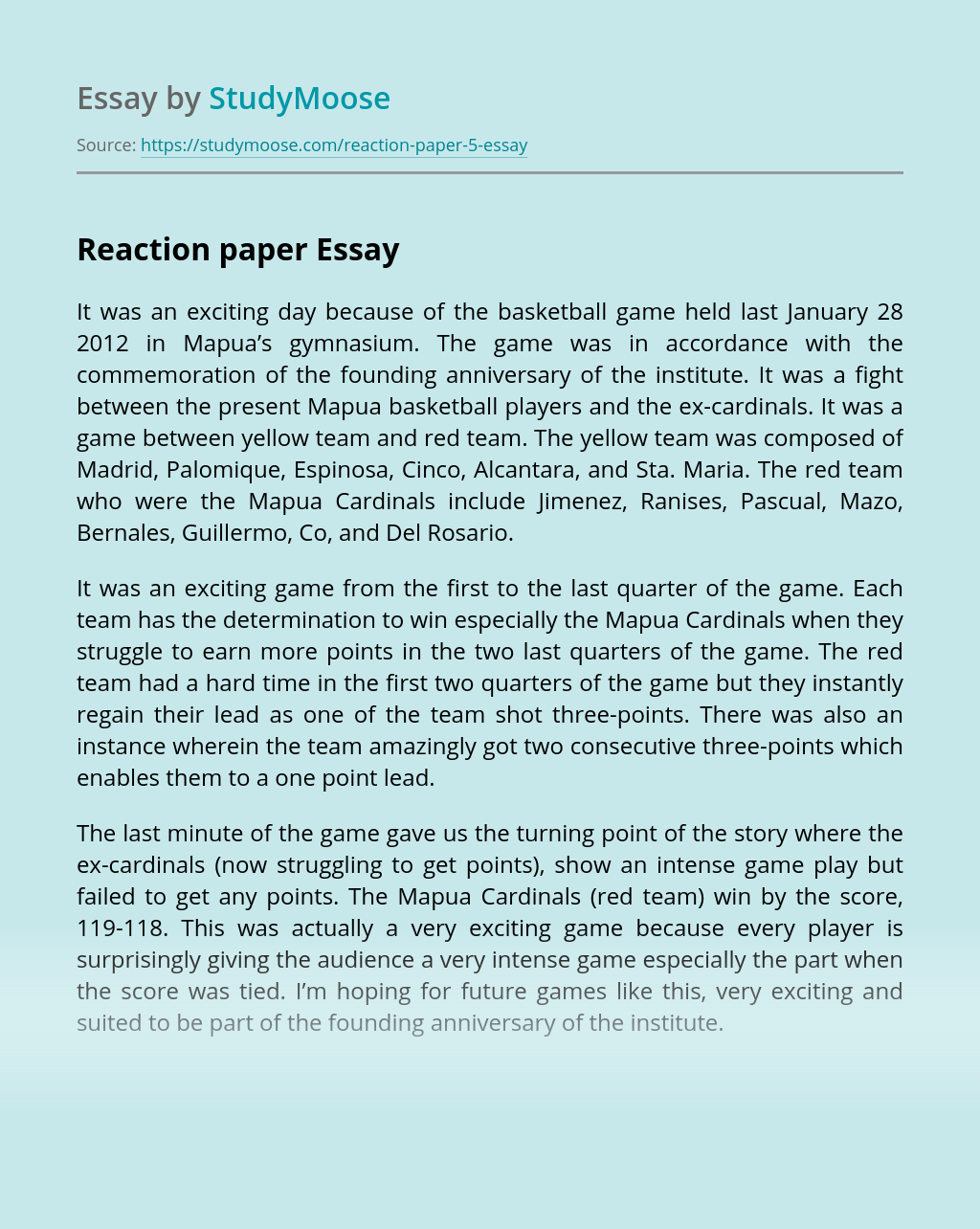 March is one of the craziest, fun-filled, exciting months of the year, especially for people who love basketball. St. Patrick’s Day arrives, the warmth is just starting to come back; but that is not the best part, it’s all the March Madness. The NCAA Basketball Tournament brings happiness, laughter and upsets to some people and...

1. Number of results for a tiger woods video game Only 1 video game on the second page, results are mostly polo’s or books 2. Ancillary products for my favorite sports team ( Borussia Dortmund) Jerseys, Shorts, and hoodies Lab Assignment #2 1. What selection criteria do you think the company goes through in order...

View sample
Do you agree the professional athletes such as football player and basketball player deserve high salaries to be paid?

Undoubtedly, there is a long and tough way towards becoming a great and the famous sports star, not only persistent efforts but also talent are required. Few people on this field could accomplish great things like them. As a reward, they deserve a higher compensation. However, in my opinion, they are paid a crazy amount...

On February 9, 1895, in Holyoke, Massachusetts, William G. Morgan, a YMCA P.E. director, made a game called Mignonette as a fun game to pass time by , to be mostly be played inside but could be played outside, by any number of players. The game took some of its characteristics from tennis and handball....