General Motors Company is an American automaker with a diverse vehicle brands, selling over nine million dollars in all over the world. The company is headquartered in Detroit, Michigan. General Motors Company has been doing its business since 1908, and having a long years of experience in manufacturing and branding made them become the world’s second largest automaker. The company and its partners manufacture cars and trucks in thirty countries, and it takes leadership positions in the world’s largest and fastest-growing automotive markets.

Don't use plagiarized sources. Get your custom essay on
“ SWOT Analysis on General Motors ”
Get custom paper
NEW! smart matching with writer

General Motors Company employs over 200,000 employees in every major areas of the world, and they do business in over 120 countries worldwide. The company’s “brands include” these vehicles: “Chevrolet and Cadillac, as well as Baojun, Buick, GMC, Holden, Isuzu, Jiefang, Opel Vauxhall and Wuling” (“Welcome”). The company’s largest markets are the “Republic of China, the United States, Brazil, Germany, the United Kingdom, Canada, and Italy” (“Principles”), and they have an international presence with manufacturing facilities in those countries.

What makes the company strong and the leader of the automotive market is that they produce wide variety of quality brand vehicles available for every target market. As the brand names were given above, these particular and determined brands allowed General Motors Company to catch 57% market share of the U.S. market by 1955. Despite the fact that General Motor’s market share decreased in the U.S., they are still doing good compared to other automakers. As it was mentioned earlier the Chinese market is becoming the largest target market for General Motors.

Since they started the business in automotive industry, they have acquired global experience which allowed them to become global leader in the industry. Having a global experience and spreading the business globally makes them strong enough and stay active in the automotive industry. The company’s Customer Financing Program, which was established in 1919, is one of the largest financing services and has operations in over forty countries.

General Motors Company also provides Onstar Satellite Technology developed in 1996, and it is a unique system for all the vehicles produced by the company. This system provides customers hands free calling, turn by turn navigation, remote diagnostics, and vehicles to be tracked in emergency situations. Since Alternative Energy Movement took place in automotive industry, General Motors following behind the action. This is considered as the biggest weakness of the company. Each company was trying to get involved in the alternative energy movement, because the demand for environment-friendly and fuel-efficient vehicles soared year by year. Staying behind the movement caused them to lose market share and a decline in company earnings. Organizational structure is important in every part of the business. The company has a poor organizational structure, which might have led them stay behind the alternative energy movement.

Nowadays, the competition in the automotive industry became strong enough, which caused none of the companies stay focused on just one country. It might be one of the major weaknesses of the General Motors too much relying on U.S. market. As the Customer Financing Program is considered as strength of the company, it might be too risky to become totally dependent on the financing program in order to gain profit, specifically, when you are competing with large growing companies in the industry. Alternative Energy Movement can be the biggest opportunity for the company. Besides producing high demanded luxury vehicles, it is obviously seen that they haven’t been focused on hybrid vehicles yet. They have to invest their profit to research and development of hybrid vehicles, and merge their brand names with the hybrid technology. Doing so may give the General Motors to become the automotive industry leader once again by providing innovation and technology to the market.

Once they started business in Chinese market, they saw huge increase in their profit margin. So, this opportunity allowed them to perceive starting the business globally. The company should lower their interest rates in financing program, which has been the main concern of every customer they had business. Choosing the right marketing strategy on the lowering the interest rates could generate potential increase in sales. They should develop new vehicle styles and models integrated with the hybrid technology. Since General Motors Company is the producer of the large trucks and SUVs, the sales of those vehicles declined dramatically because of the lack of fuel-flexibility.

Most of the people prefer driving fuel-efficient vehicles, because the fuel prices increased tragically. So hybrid vehicle became solution for the problem, but on the other hand became a threat for the General Motors Company. Increase in fuel prices was main reason to start the alternative energy movement, and create the opportunity for development of environment-friendly vehicles using the hybrid technology. The companies who were involved and used this technology were distinguished companies in the automotive industry. The foreign competitors became serious problem for the company, like Toyota, Honda, and Hyundai, which they took first step in using the hybrid technology. The last threat for the company could be the increase in raw materials like steel mainly used to produce the vehicle. 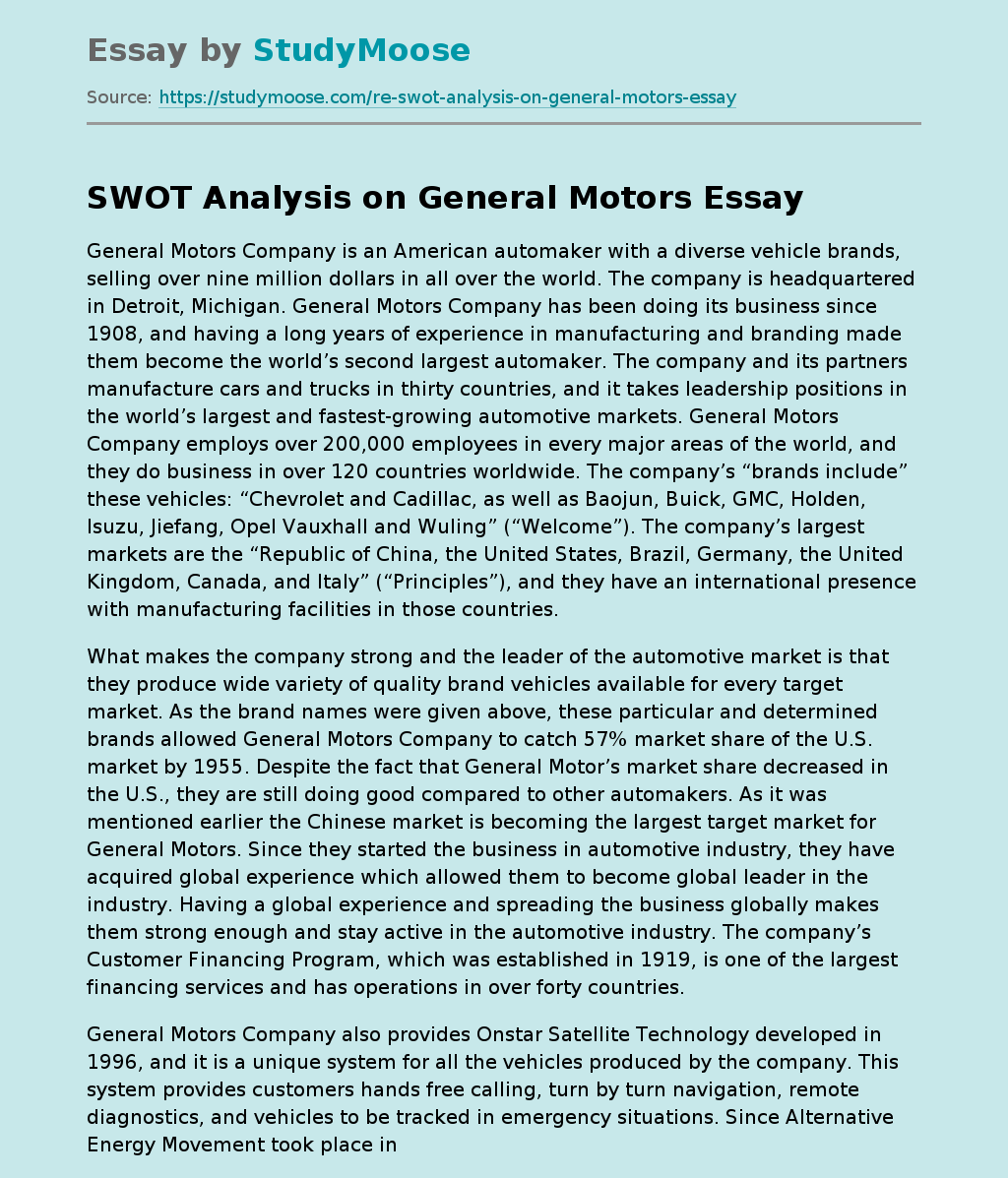