Pride and Prejudice: Women and Social class in the Regency Era

Women were not considered to be equal to men. Women were regarded as being more fragile, mentally and physically, than men, and in need of care and protection. Wives were expected to defer to their husbands. Women laboured under certain legal disadvantages. When a woman married, for instance, any property she owned or any moeny she earned or ineherited automatically belonged to her husband. A husband could divorce his wife for adultery (though even for a man,divorce was difficult to come by, and carried a strong social stigma) but a woman could not divorce her husband even if he was cruel, deserted her etc.

Don't use plagiarized sources. Get your custom essay on
“ Pride and Prejudice: Women and Social class in the Regency Era ”
Get custom paper
NEW! smart matching with writer

It ws possible to obtain a legal seperation, but that ws very difficult to come by.

For upper or middle class women who needed to earn a living, teaching was one of the very few respectable options, and to be a teacher was not regarded as a particularly desirable occupation. A woman who became a teacher might be a governess (teaching the children of one family in their own home) or she might be a teacher in a school.

Universities did not admit women at this time, and there were no female university professors, nor could women be doctors or lawyers or go into the church.

The standard of education in girls’ schools was very variable, most concentrated mainly on fashionable accomplishments like dancing, music, French, and drawing, but some had more demanding curriculums. Mary Russell Mitford (who was a few years younger than Jane Austen) went to a school that taught Latin and Astronomy as well as the more usual subjects.

And there were books aimed at girls which offered more challenging subjects. for instance, an immensely popular book in the Regency era was ‘Conversations in Chemistry’ by jane marcet, which taught chemistry in the form of conversations between a governes.s and her two pupils. This book was extremely popular and went through many editions. It was intended mainly for girls, but was read by men as well, the scientist Michael Faraday said that it was one of the two books that had influenced him most in his life (the other was the Encyclopedia Britannica).

However, as you can see from reading the novels of Jane Austen, gentlemen were expected to treat ladies with respect. Most girls of the upper and
middle class expected to stay at home until they married, but most were probably quite happy with this. It was not usual in those days for people to work unless they really needed to. This applied to men as well as women, a gentleman like Mr Darcy or Mr Bingley for instance would not expect to have to work for a living, any more than most women of their class would. Relations between men and women were often very good, for instance you can see from the letters of jane Austen that she had a lot of affection for her brothers, and they for her.

It was different for working class women of course. They, like working class men, would be expected to work for a living from an early age. One of the commonest forms of employment for women in this period ws domestic service. Almost everyone who could afford it kept at least one servant, and a wealthy family might have dozens. One of the very few working class characters in Jane Austen is the housekeeper at Pemberley (mr Darcy’s home) who speaks about him so warmly when Elizabeth and her aunt and uncle visit the house.

The housekeeper was the most important female servant in a large household, and she would be in charge of all the other servants, give the orders as to what they were to do, manage the household accounts etc. It was a responsible and important position. The fact that Elizabeth Bennet is impressed by the housekeeper’s good opinion of Mr Darcy shows that a servant’s opinion of her employer could be a valuable guide to his character.

Pride and Prejudice: Women and Social class in the Regency Era. (2016, May 01). Retrieved from https://studymoose.com/re-pride-and-prejudice-women-and-social-class-in-the-regency-era-essay 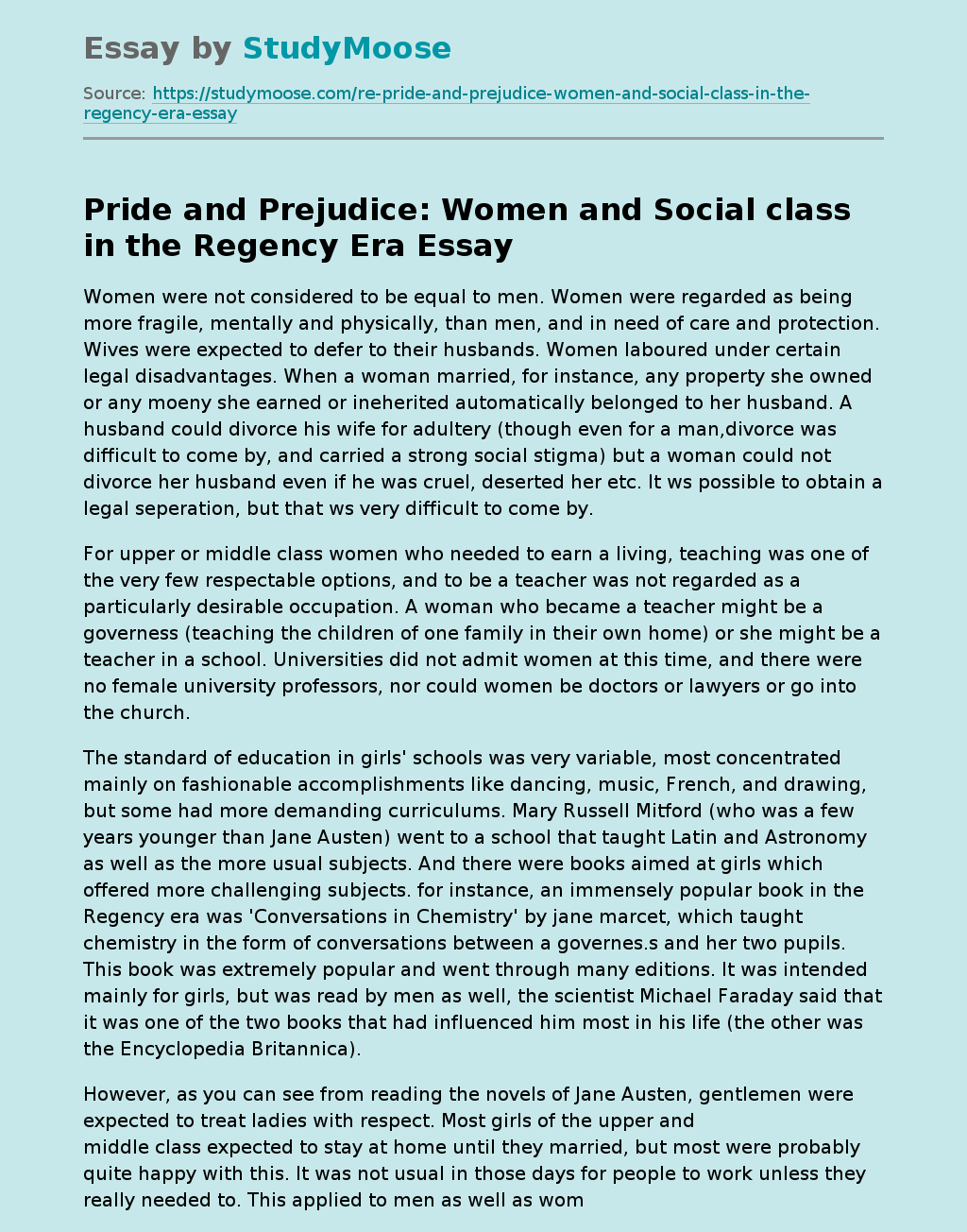