This paper preludes the history of one most versatile instrument in the entertainment industry and its development. In the closing quarter of the eighteenth century, the pianoforte turned into the principal instrument of parading western art music. The piano most commonly called the piano instruments caught the hearts of many both amateurs and professionals. A piano sustains different pitches in an attractive and lyrical craze.

Having the ability to play any kind of tune in the orchestra, a piano can broadly feature the definition of a stringed keyboard with a hammer action in its instrumentation.

Don't use plagiarized sources. Get your custom essay on
“ Development of the piano from the romantic era to the classic era ”
Get custom paper
NEW! smart matching with writer

The piano is capable of gradation of both soft and shrill this made the essential instrument of harmony pedagogy. As the dusk of the nineteenth century became, the piano was a common feature most middle-class populations of both North America and Europe. Most western composers including Mozart have played this instrument.

” This name sequentially shortened to pianoforte and subsequently to just piano. The device displayed in New York City in the metropolitan museum (Eugene). A combination of the magnificent tone underneath aptitude of the clavichord with the influence of the harpsichord led to three inventories. The inventors were functioning separately; they invented approximately the same piano actions – Christofori of Padua, Schroter of Saxony (1717) and Marius of Paris (1716).

Marius did not accomplish creating a piano. He deserted his models, since they were not pertinent to the present harpsichord.

Schroter’s exploit resulted in the creation of the Vienna action and school of piano edifice. On the other hand, Christofori’s piano in 1747 was with Silbermann. It was in the workshop of Silbermann that an English school of piano making emerged (Eugene). The creation of the Piano as an intact and absolute instrument accredited to Christofori Bartolommeo of Italy. German and Italian makers swap the quills by hammers of harpsichord. They steadily overcame the numerous problems of its structure. A gifted French instrument maker Sebastian Erard introduced an ingenious advanced mechanism all previous ideas. This invention led to the piano “action” of our day (Bachus). The Broadwood as well did much to build up the supreme tone of the instrument. The manufacture of piano became one of the world’s industries.

France, Australia Germany, and England were doing their preeminent to advance the traditional instrument. The claim for superior power resulted to the preamble of the substantial metal framing necessitated by the amplified tension of steel strings. The increased solidity, strength and qualities increase sonorousness and power to the tone. American makers and inventors have contributed much to the instruments improvement (Bachus). The classical period spanning over seventy years was a period when composers started pulling in the sovereignty of the numerous baroque time musical styles. They achieved by creating stringent compositional “regulations.” Within this inflexibility, grand composers like Mozart and Haydn created several of the utmost classical music known to the world. However, they were not the solitary writers accountable for excellent classical music at the time

Haydn was an incredible composer, exemplified the denotation of classical era composition. Even though he was not as showy as younger, Mozart was. His compositions always remained accurate to its form. Unlike a number of other composers, Haydn had a “consistent and sound” job composing, performing, directing, managing and teaching musicians from the royals of the Esterhazy family unit (Eugene). In this period, Haydn composed countless pieces for the performance of the chivalrous orchestra. With an astounding creative work, with the inclusion of over the 60 string quartets and 100 symphonies, he is occasionally referred to as the “father of string Quartet or symphony.”

Mozart was born in 1756 and he started the work of composing when he was five years old. He began touring Europe a short time he began composing. Unfortunately, Mozart passed on at the juvenile at 35 (Eugene). However, throughout his short existence, Mozart had over 600 compositions. His style of composition and that of Haydn are similar. The only difference was its consisted of long notes, and was more flamboyant.

Political and social stress in the period of 1825-1900 following the French revolution and the nationalistic trends resulted to “romanticism.” The period was dramatic mud with thought. The contradictions between socialism and capitalism, faith and science, logic and emotion were significantly thought provoking. There were a revolt and impatience in the rules of classism and music as well as the practices of Mozart. The perfections of the romantic composers were one with an individualistic approach to emotions and feelings (Wood)

In 1822, the Erard brothers untested the most prominent of all piano measures: the double escapement action. The rationale of the apparatus was the similar to that of 1808. However, while highlighting its drop from the Cristofori – Silbermann orientation, the purpose of every of its disconnected parts worked out with tranquil superior insight and originality (Bachus). Nevertheless, the hammer failed to fall back entirely after the fast escapement, but came to rest concurrently on a sprung and a check piece; sloping lever retained the tack hammer in proximity with the strings.

The key then elevated a little; the check unconstrained the hammer and thus propelled alongside the strings again. The keys movement transmitted to the hammer through the slanted lever. The act noted at formerly for its extraordinary lightness, suppleness, and dependability. Its importance cannot be overstated since only little modifications of the elements were required for the modern piano (Isacoff).

Romantic music amplified power and emotional expression to portray human feelings. It preserved the formal structures from the classical period and created new forms that were viewed as better suited to the new subject matter. The theme in the novel music was at the moment not only entirely abstract, but also universally drained from other art sources as history and literature.

He was baptized in 1770 a German pianist and composer. He remained an important figure in the transition from classical to romantic music. He is one of the most influential of all times in the western art. He was a citizen of the Roman Empire who was an inborn of Bonn, the capital of Electorate of cologne. In his early twenties, he moved to Vienna. In Vienna, he studied with Haydn Joseph and swiftly gained a reputation as an expert pianist. His status started deteriorating in the end 1790; however, he progressively continued to composing and performing even after he became deaf (Isacoff).

In the onset of the romantic literature revolution Beethoven, composition the 1824 symphony number nine was notable. An elaborate set made the introduction of a        soloist and chorus. It seemed like in a solely instrumental appearance of the classical symphony that did not entirely express his feelings. After this drastic exodus from tradition, a lot of composers felt liberated to try out other styles.

Schubert’s music efficiently connects the music in the Classical to the Romantic era. It does this using inventive scoring, lovely melodies, and nature imagery; it weds traditional classical type and increase them. In his unfortunate petite life, he composed sonatas, symphonies operas, chamber, piano music, and more than 600 songs (Wood). However, despite the genre, his talent for the creation of gorgeous melodies remains unmatched in history. Schubert’s music was as well adoring, at times dark. He had emphasis on the minor and major key shifts backed with adventurous harmonics. Some Outstanding illustrations of his talent for tune are in admired A major quintet (Isacoff). They are inclusive of a set variance on the melody of one of his famous songs and from which he was nicknamed “The Trout.” Even though he left incomplete for no known rationale, Schubert’s inspiring and gorgeous Symphony in B minor no. 8 in, is one of his most admired works.

Wilhelm was a German composer. He was famous for style as an essayist and theatre director. Conduct. He primarily had a unique opera the “music dramas.” His compositions, chiefly those of his afterward time, are prominent for their composite texture, orchestration and rich harmonies (Isacoff). The complex exercise of leitmotifs: musical themes connected with plot elements, places, ideas, and characters. Dissimilar from most of the other opera composers, Wagner was a writer of both libretto and music for each for his works. Wagner introduced swift shift in tonal center and chromaticism in language. The advancements greatly influenced the development of classical music in Europe. His Isolde and Tristan occasionally referred as the mark for the onset of modern music. The influence of Wagner spared beyond music into philosophy, literature, and visual arts. He constructed his opera, the Bayreuth Festspielhaus that contained a variety of new features (Wood). This was the point where the Parsifal and Ring found their premiers that many stage works are performed.

Through the classical into the romantic era, the piano has significant changes. Composers gave melody into the romance period it had more emotion and melody. Music develops from the church forum into the streets and a worthwhile job. The magnificent tone underneath that was displayed at the New York museum formulated in the romantic era. This was through the ingenious inventions of Sebastian Erald. The works of Americans not forgotten as they fined tuned the construction of the instrument as well as an introduction the metal frame in the now modern pianoforte.

Isacoff, Stuart. A Natural History of the Piano: The Instrument, the Music, the Musicians – from Mozart to Jazz and Everything in Between. Great Russell: Souvenir Press, 2012.

Development of the piano from the romantic era to the classic era. (2015, Aug 03). Retrieved from http://studymoose.com/development-of-the-piano-from-the-romantic-era-to-the-classic-era-essay 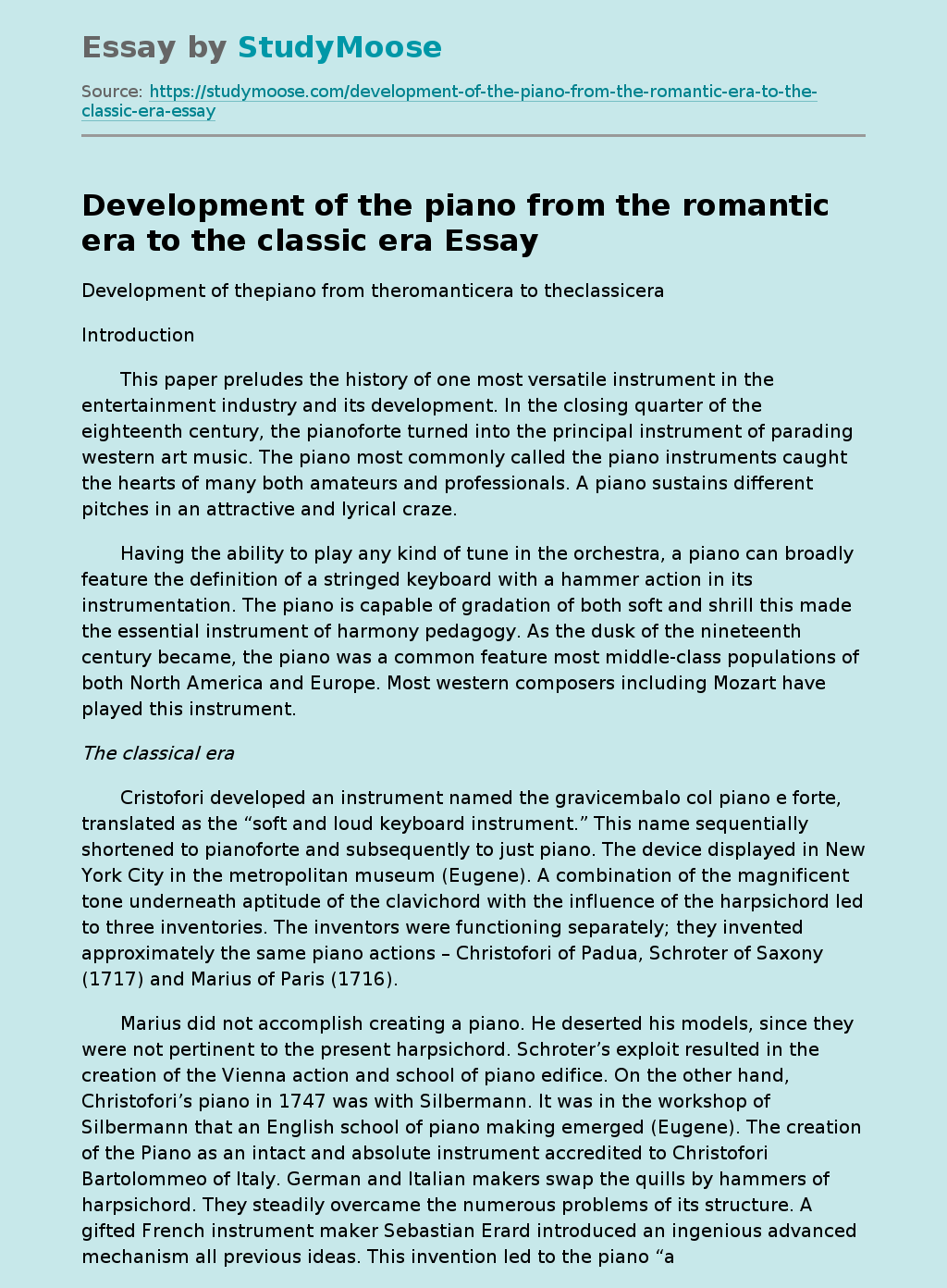