Carol Berkin clearly states her thesis in the introduction of Revolutionary Mothers. “Despite the absence of radical changes in gender ideology and gender roles for most women, the Revolution did lend legitimacy to new ideas about women’s capacities and their proper roles”. (Berkin 2005) In two thousand and fourteen it is questionable about how clearly women’s roles have changed especially in the areas of economics and politics at least it is obvious that the revolution did not bring equality. Legal status has changed.

Don't use plagiarized sources. Get your custom essay on
“ Essay on Carol Berkin’s Revolutionary Mothers ”
Get custom paper
NEW! smart matching with writer

Of course, educational opportunities have expanded greatly; however, it often appears the more things change the more they stay the same. Even our popular vernacular demonstrates an entrenched gender inequality. “You throw like a girl” reveals poor physical performance. To concretely state subordination a person need only to make another their “bitch”. Female autonomy is usually used to denote weakness. While women now have the right to vote it is interesting that in the US Senate only 20 of the 100 senators are female.

It is standard knowledge that while women are legally entitled to their wages they make 82 cents to the dollar of a male’s wages and even lower percentages for women of color. (US Department of Labor 2014) As a result of the Revolution, changes occurred. “While all those who debated the woman question agreed on the intellectual and moral equality of the sexes, few believed that the two sexed should employ their abilities in the same arenas.

” (Berkin 2005) If this is true of 1781, it is true of 2014 as well. Gender roles still ensure women are not equal social, economic, and political participants in the US. Clearly, women could not have demanded emancipation at the conclusion of the Revolution principally because of strict gender roles on the 1700’s. Yet to assume women did not contemplate greater political, economic, and social equality because of gender roles would relegate them to inferior intellect and place Victorian ideology onto them in 2014. Women questioned their position as any other individual even though they did not collectively seek radical change. Berkin makes a strong case steeped with evidence about an independent political conscience emerging. Feme covert was the status 18th century women found themselves in upon marriage.

This status meant her legal personhood disappeared with marriage as she was assumed by her husband as a dependent. Berkin begins her argument with the role of women at the time of the American Revolution. Women could assume new responsibilities because of her helpmate responsibilities without seeing those responsibilities in light of a desire to change her status. However, more than that was occurring. “…across the colonies, women and girls developed concerns outside the private world of the family and began to ‘think nationly’.” (ibid, 11) Largely because of women’s roles in the process of boycotting goods, women utilized political power. Women became critical participants in the opposition to Britain. Gender could not stop the obvious question of what would be the meaning of the demanded changes. Purchasing power was used as an effective tool and the humanitiy that pushed women into participation must have also generated questions as to what changes would occure because of these protest. Gender roles might have inhibited the action of demanding change but it didn’t stop the question from beign raised. Being loving or even just obedient partners might explain their involvement but it could not surpress the natural inclienation of asking questions of why. The Edenton Resolves profess that although women owed obedience to their husbands their behavior was also for personal reasons, “Yet they also declared that it was the duty they owed to themselves.” (ibid, 22) Loyality and gender roles would impact female actions and motivations.

“Catherine Schuyler, wife of the American general Philip Schuyler, tossed flaming torches on her fields of wheat rather than see it used to feed General John Burgoyne’s invading army.” (ibid, 41) Still primal motivations of survival and self interst would dominate motivation. “The whole world appeared to me as a theatre, where nothing was acted buy cruelty, bloodshed, and oppression; where neither age nor sex escaped the horrors of injustice and violence; where lives and property of the innocent and inoffensive were in continual danger, and the lawless power ranged at large.” (idib, 36) Survival motivated. Whether refering to camp followers or Generals wives, self interest moved human action. The Baroness von Riedessel, Martha Washington, or Caty Greene were all tied to their husbands and their success. Their decision to follow their husbands and face the challenges facing soldiers on the front lines with a definite grace related to their own futures and status as much as their husbands and each of these women would have known that fact. Surely loyality and affection played a role in their behavior, but not necessarily many more that self interest. Nathaneal Greene instructs his wife on her options during his absence, “She chose neither of his suggestions.” (ibid, 78)

Instead she made her own choice on her own interest. Self interest were linked to an emerging independent conscience. Grace Galloway exposes this point. When her loyalist husband left her in Philadelphia she found herself in dire straits. Even when the government confiscated her property, she worked to retain economic rights. “Grace did not surrender quietly. Throughout 1778, her journal entries show her determined attempts to separate and recover her dowry property from the rest of her husband’s property.” (ibid, 94) Female political conscience was also demonstrated by the shift in legal verbage. “Thus statutes defining treason began to speak of ‘persons’ rather than mne, of ‘he and she’ rathen than ‘he’ alonge.” (ibid, 100) These “…independent political choices” (ibid, 100) could be looked at as wifely duties but the law saw otherwise. Native America women also had to weigh self interest in determining the best course of action and the wisest ally in the American Revolution. Gender roles among some Natives were quite different than most European gender roles. So a natural inability to compromise became extremely strained.

“For those steeped in the English traditions of subordination of women, women’s councils and women warriors were a radical crossing of gender lines…There are few records of Indian women’s view of English colonial society. Those that exist suggest amazement at the female dependency and exclusion from political life that marked a culture that was as alien to them as theirs was to the English.” (ibid, 109) Molly Bryant’s loyalty to Britain marked her belief in protecting her self-interest. “She believed her political commitment to the Crown honored her husband’s memory and, most importantly, served the best interest of her Mohawk kinsmen and women.” (ibid, 112) For her entire life she worked as a political leader attempting to secure lands and rights for her people. Several other female Native leaders worked to secure Native interest. The American Revolution would greatly limit the voice of Native people and particularly Native women but many Natives had a definite political conscience which they voiced loudly and often. Gender norms did not stop African Americans women from questioning the ideas of liberty promoted in the American Revolution. Likewise, the self-interest of the British crown encouraged them to court African Americans for support as Dunmore’s Ethiopian Regiment attest.

The chaos of the war offered opportunities for freedom and many sought refuge behind British lines. Usually these opportunities did not lend themselves to freedom with many Africans sold to the West Indies, yet the vast number and movement of Africans show the ability to work towards their own benefit and the ability to think politically. Berkin uses primary sources to lay out her claims including newspapers, letters, and diaries. Relying heavily on the work of Elizabeth Ellet’s Women and the American Revolution, her work was influenced by the gender roles of the 1840’s and 1850’s. The Cult of Womanhood cloud the political conscience of Revolutionary women but even so that voice questions personal sovereignty. At times Berkin seems superficial in her arguments; still she argues that change did occur with the American Revolution. There was no great revolution for women’s economic, political, and social equality. John Adams states, “We are obliged to go fair, and softly, and in Practice We are the subjects. We have only the Name of Masters, and rather than give up this, which would completely subject Us to the Despotism of the Petticoats, I hope General Washington and all our brave Heroes would fight.” (ibid, 158) Even so the women’s debate did cause pause.

“Reason rules, in every one, the same. No Right, has Man, his Equals to control, Since, all agree, There is no Sex in soul.” (ibid, 151) “Women’s participation in the war had given concrete, empirical evidence of their ability to think rationally and make ethical judgments.” (ibid, 152) Carol Berkin uses both famous and obscure women. She looks at patriots and loyalistis, trulls and General’s wives, Native Americans, African Americans, and spies. The idea of Revolutionary mothers who would train the upcoming generations of Republican citizens guaranteed changes in women’s education but at the expense of extensions of rights for women. Yet changes in education would give voice to festering ideas. In spite of this revolution, political conscience began to develop.

Suffrage was eventually won but not as an extension of the Revolution. Gender roles of 2014 still create a definite imbalance in society politically, economically, and socially. Women function, work, raise families, display citizenship, pay their bills, and interact within their communities within continued gender restrictions. Because we do not protest or demand immediate resolution does not mean we do not think about, contemplate these inequities. How could Abigail Adams prompt John Adams to “Remember the Ladies” if she did not have a conscience about the injustice of property and legal status of women?

Essay on Carol Berkin’s Revolutionary Mothers. (2016, May 30). Retrieved from https://studymoose.com/re-on-carol-berkins-revolutionary-mothers-essay 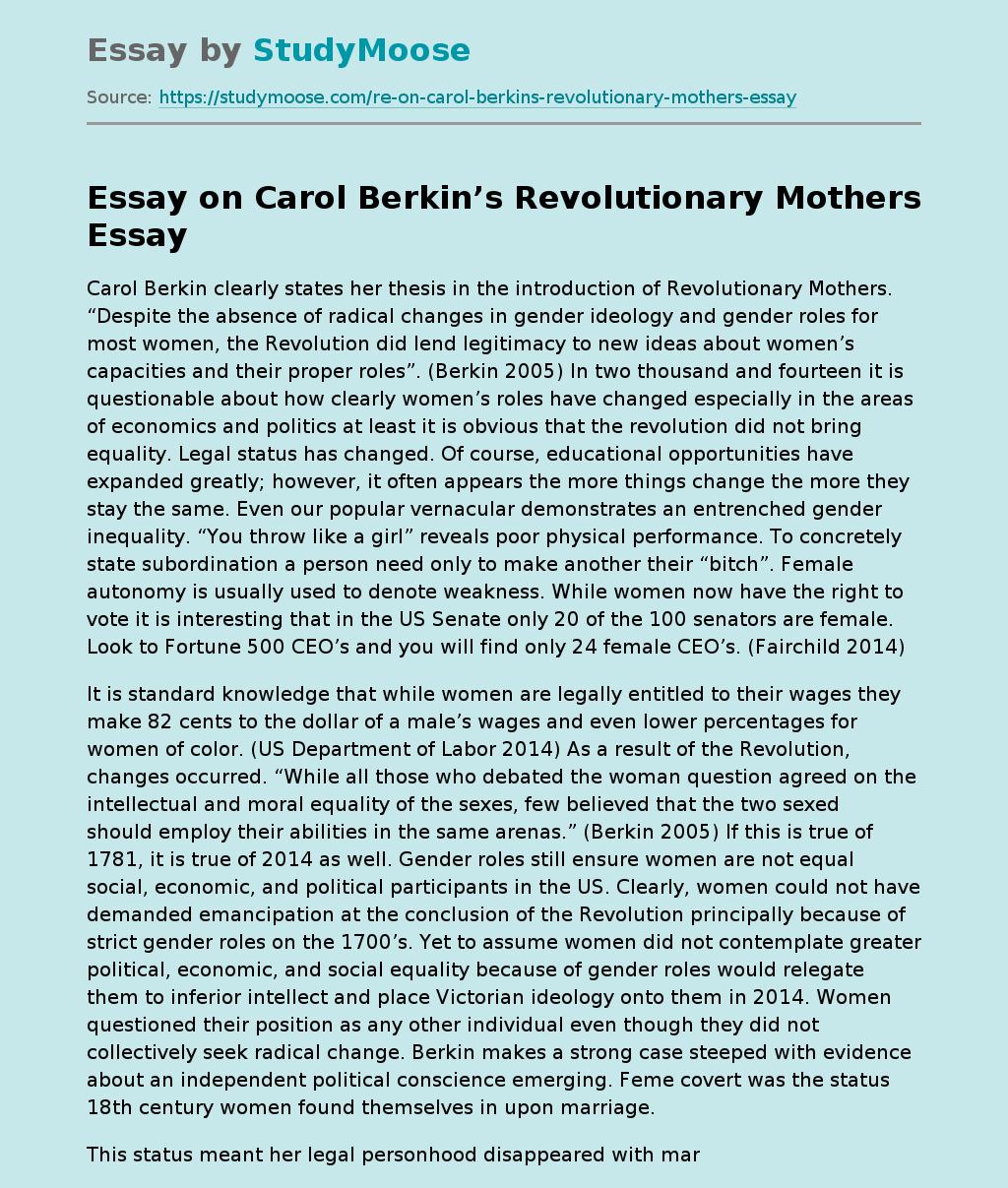