Mohawk Indians: Past and Present

The Mohawk Nation is a Native American tribe of the New York area. They were a sedentary tribe who practiced agriculture in the harsh northeast climate. The primary crops were corn, squash, and beans. The Mohawk were skilled trappers who took advantage of this skill when the Europeans arrived in their area. The tribes worked with other tribes to achieve better relations with other Native Americans and Europeans. This included a constitution and treaties with Americans and Canadians.

The modern day Mohawk Nation has tried to keep their culture and their land.

Don't use plagiarized sources. Get your custom essay on
“ Mohawk Indians: Past and Present ”
Get custom paper
NEW! smart matching with writer

The nation of the Mohawks once covered a large area of New York, Ontario, and Quebec. Present day Mohawks mainly live on three reservations. The tribes on these reservations are the Akwesasne, Ganienke, Kahnawake, Kanesatake, Kanatsiohareke, Six Nations, Tyendinega, and Wahta (Mohawk Nation Council of Chiefs, 2007).

The tribe deals with many modern day problems that are similar in nature to the issues of the United States as a whole.

Education is a concern for the tribe. The main issue of education is the focus on retaining their culture and obtaining the level of education needed in today’s society. Their answer to this problem was to found the Akwesasne Freedom School. This school was founded in 1979 by parents of the tribe for children in pre-k through eighth grade (Mohawk Nation Council of Chiefs, 2007). Besides the basic studies the curriculum focuses on culture beliefs and also includes a Mohawk language immersion program.

Another concern of the Mohawk nation is the disputes of land ownership in their territories.

The tribes of many areas in the New York and Canada area are fighting to keep rights to land that were allotted to them centuries ago. According to Connie Kidd, (2007) after the American War of Independence, during which Mohawk warriors fought as allies of the British, the Haudenosaunee were persecuted in their New York territories and so moved north to ancestral territories along the Grand River, which were reserved for them in the Haldimand Proclamation of 1784. This land was gradually taken out of their hands through disputes and surrenders. The tribes have had trouble being successful in getting the two governments along their borders to honor separate treaties regarding land ownership.

As in any other nation, crime is a concern for the Mohawk Indians. In the Mohawk territory smuggling has become a concern for the local citizens. Drugs, other contraband, and illegal border crossing have risen in the recent years. The smuggling problem seemed to have risen with increased taxes on tobacco in Canada. The smugglers, who are Mohawk Indians and other races, used the Akwesasne area to transport tobacco to Canada, so much so that the area became known as smugglers alley (Bonaparte, 2002).

Another factor in the rise in smuggling is the duties that must be paid to bring goods into the Canadian side of the border. Since some of the Mohawk territory is divided between the Canadian and the United States borders the residents must pay to bring goods from one side to another. This has proven to be a hardship for the Mohawk Indians, especially in conducting business inside the reservation. The case of Mitchell vs. the Minister of National Revenue was a decision that stated the Mohawks of Akwesasne did not have an aboriginal right to bring trade goods across the border without paying duty (Bonaparte, 2002). This Canadian court decision, which itself took many years to decide, has affected the Mohawk Indians in conducting business inside and outside the reservation, and thus led to an increase in smuggling.

The Mohawk Indians have had trouble combating this problem since the 15-member Tribal police force currently pays for border enforcement from its own operating budget that is supported by Tribal revenue (Indian Times, 2006). The tribes answer to help solve their crime problems is to train local Mohawks to serve in law enforcement. According to the Indian Times newspaper these tribal police officers are ideally suited to monitor this stretch of border as they are Akwesasne residents with an intimate knowledge of the territory (2006). The Office of Law Enforcement Services is responsible for improving law enforcement services and preserving the public’s safety throughout Indian Country.

The United States has dealt with smuggling across the borders for many years and from every border. Prohibition times seen the smuggling trade rise in this very same area yet the items were being smuggled into the United States instead of out. The methods of controlling this problem have changed since that time in history. Mohawk elders can recount that border patrol agents used deadly force to combat the smugglers, native and non-native alike (Indian Times 2006).

Even though the smuggling issue has been present since the prohibition days in the early twentieth century the United States government is only now beginning to understand the impact it is having on the Mohawk and surrounding communities. In 2006 the Bureau of Indian Affairs awarded the Tribal Police Department with a grant to help combat the drug smuggling and the illegal border crossing problem in Akwesasne (Indian Times, 2006). This funding is intended to increase the number of native officers to help fight the crime in the community. The Department of Justice and the Department of Homeland Security are among other government offices that have awarded grants to the police department to aid in buying equipment and addressing other issues (Indian Times, 2006).

By working together the two nations can fight an ever growing problem and keep the Mohawk and surrounding communities safe. The various funding from the United States government can be effective in financing the programs needed to protect the community. This cooperation between the two nations will benefit both in the long run.

Bonaparte, Darren. (2002). A line on the map. Wampum Chronicles. Retrieved April 5, 2008, from http://www.wampumchronicles.com/bordercrossing.html.

Mohawk Indians: Past and Present. (2016, Jul 31). Retrieved from https://studymoose.com/re-mohawk-indians-past-and-present-essay 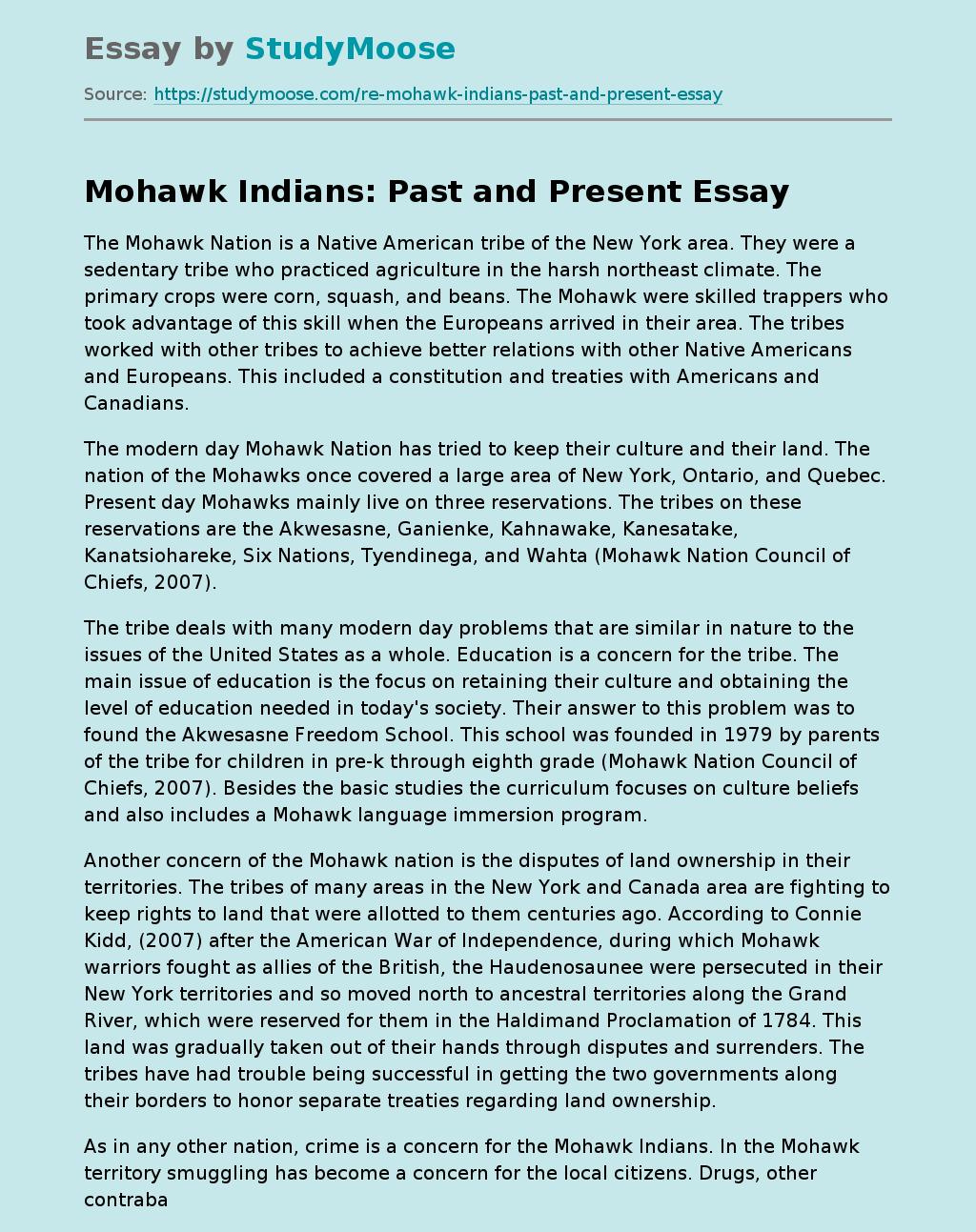