Although the crime-writing genre consists of a wide array of subgenres and hybrids, these texts all focus on a criminal investigation using this as a platform/vehicle to explore and comment on the values and the social context in which it was composed. In doing so, crime fiction texts do not just tell a crime story; they make insightful social comments to inform responders.

This is evident in P. D. James’ “The Skull Beneath The Skin” (Skull) which not only follows an investigation but also comments on the justice and the emerging role of women in 1980’s Britain while Alfred Hitchcock’s 1954 film “Rear Window” (RW) is a hybrid of the crime and romance genres, exploring not only American crime and punishment but also urbanisation and gender roles.

Don't use plagiarized sources. Get your custom essay on
“ Crime Fiction ”
Get custom paper
NEW! smart matching with writer

Marele Day’s 1998 novel “The Life and Crimes of Harry Lavender” (Lavender) describes an investigation while also exploring its associated issues of justice and gender roles while Matt Groening’s 1995 Simpsons Episode “Who Shot Mr Burns? (Burns) parodies the classic crime conventions, focusing on the ethics of capitalism and the modern justice system.

James’ 1982 novel Skull not only engages with the investigation of the murder of Clarissa Lisle, but also comments on gender roles and justice, appealing to its audience. In this text, Cordelia Gray reflects the increasing role of women in the workforce of the time, by being actively involved in the solving of a mystery. However Cordelia did not succeed in her task, which was to protect Clarissa Lisle, and even failed to prevent several deaths, including that of Simon’s.

This shows that James believes Gray is incapable of dealing with such tasks, and by an extension, that detecting is “an unsuitable job for a woman. ” James is warning her audience that despite the emerging role of women, they are still limited in terms of what they are capable of. Additionally, the other main females in the novel are no better. Clarissa is an egocentric, superficial femme fatale while Roma owns an unsuccessful bookshop and is in urgent need of money in order to keep her lover Colin, who is already married. Despite this, the males are also characterized equally as flawed as the females.

Sir George is a dull, conservative Englishman who is a member of a right-wing, virtually fascist organisation, Simon is a fragile, insecure and socially inept teen, Ivo is a dying, bitter ex-lover of Clarissa’s while Ambrose is an insolent recluse. By providing no ideal character, James has reflected the more equalized gender roles of the 1980’s. Furthermore, James does not conclude with the conventional ‘happy ending’ where justice is served and order is restored. She instead conveys a much more credible depiction of society, reflecting a 1980’s context.

Although Simon is the killer, Gray positions us to sympathise him, as he is a young, timid boy who was influenced by Gorringe to murder Clarissa. Simon dies, and is therefore punished for his crime, however the reader is positioned to dislike Gorringe as he is a manipulative and arrogant man. He is not punished, and therefore we believe that justice is not completely served as he has committed crimes as well by interfering with evidence and tax evasion. Unlike cosy school traditions, Gorringe is not legally punished due to social issues such as class and economical hierarchy.

As a minor rich aristocrat, Ambrose is safe within his social position, wealth and intelligence. In reality, it is possible for the police to know ‘whodunnit’ but not be able to bring anyone to court because they do not have the evidence, highlighting the problem with law and justice in modern society. Thus Skull not only explores the process of investigating a crime but also comments on social and moral issues of gender roles and the justice system. Similarly, Lavender does not only describe the solving of Mark Bannister’s murder, but also insightfully explores gender roles and justice.

Claudia Valentine is a hardened private investigator who challenges the conventions of a stereotypical hard-boiled detective. The opening segment of the novel subverts the convention of the hard-boiled subgenre as most readers would assume the protagonist is a male: “I woke up feeling like death. The blonde slept on. Thank god the black suit was hanging in the wardrobe. ”

Also, Claudia relies on her quick repartee and intelligence rather than her looks and does not expect any concessions due to her gender: “The crims don’t discriminate; they’ll blow away a woman on their trail just as readily as a man. Valentine does not carry a gun, a traditionally male object which can also be interpreted as a phallic symbol, but instead relies on her karate skills. Furthermore, Steve Angell, her romantic interest, plays the traditional female part of nurturing and being supportive, another socially challenging inversion. He does not interfere with her job; offers help when needed, and even cooks – showing that gender roles are now more equalized than they were in the past.

Furthermore, Day comments on justice and the corruption in society as a result of the constantly increasing number of crimes. The setting creates a dark atmosphere of the seedy underbelly of the city, as Sydney is depicted as full of corruption and violence: “There is more hidden from view, the labyrinth underbelly, the city of the night. ” The setting further reflects the issue of appearance and reality: “So pretty and so innocent, the facade of lights covered a multitude of sins and one of those sins was murder,” emphasising that evil insinuates itself into the city.

Also, the plot focuses on Claudia’s hunt for the manuscript that would expose Harry Lavender and his crimes. She finds the text but Lavender falls into a coma, escaping exposure and justice. This subverts the conventional ‘happy’ ending and conveys a more cynical modern awareness that life is not necessarily ‘just’ or ‘fair. ’ Thus, Lavender provides insight into crime and its effect on society as well as gender roles in the modern society. RW also does not only follow an investigation of the murder of Mrs. Thorwald, but also provides insight into gender roles and American suburban life in the 1950’s.

The film reinforces the patriarchal society of its context as Stella and Lisa assume the role of assistants to Jeff, who is the observant, rational, amateur “detective,” directing and organising the solving of the crime. His observational skills confirm Thorwald as the killer whereas Lisa breaks into Thorwald’s house, only to please Jeff, and is subsequently caught. She further compromises herself, revealed in her change of costuming.

At the outset, she is dressed in a richly decorated dress however by the end, she wears something more casual and practical to conform to what Jeff wants in a woman – someone “ordinary. ” In the last scene she is seen reading “Beyond the High Himalayas,” an obvious passion of Jeff’s, but takes out “Bazaar” magazine when Jeff is asleep, echoing the 1950’s attitude that it is the woman who must compromise herself for the sake of her relationship with her partner. RW also explores the underbelly of suburban communities as there is no sense of a homely neighbourhood, highlighting the consequences of urbanization.

The paucity of communication between the neighbours is revealed through Jeff who only interacts with his neighbours secretly and from a distance – seen when he raises his glass to Miss Lonely-Hearts. Also, the sculptress reacts in surprise when someone says ‘hi’ to her. The film further comments on the morality of voyeurism and the importance of privacy, encapsulated by Jeff’s statement: “Do you suppose it’s ethical to watch a man with binoculars, and a long focus lense…is it ethical even if you prove he didn’t commit a crime? When Thorwald confronts Jeff, a sense of desperation is exposed, position the viewer to sympathise him while the lack of response from Jeff suggests that perhaps he is the more heartless character, challenging the audience to question whether who really is in the wrong. Thus, this film explores the issue of voyeurism as a crime while also acting as a social commentary of 1950’s America, dealing with relationships within the community in an urban setting and social gender roles as well as following the unraveling of a crime.

Similarly, Groening’s Burns not only follows the investigation of an attempted murder of Mr. Burns, but further explores the ethics of capitalism and the flaws of the justice system. The authority of the police is constantly undermined in this text, exposing the lack of respect for the law and integrity in our justice system today. This is established in the crosscut from Eddie to Lou (policemen) who are interrogating witnesses to the shooting of Mr Burns. They appear very professional until it zooms out to reveal that the witnesses are only Maggie (baby) and Santa’s Little Helper (dog).

This use of humour is very anticlimactic and highlights the inadequacy of the police force. The DNA test scene shows the scientist can be easily bribed to obtain the DNA results quicker, commenting that those with money and authority in society will benefit, and that society is very materialistic. Here, Groening presents a more modern cynical view on modern capitalist societies, in that authorities are limited and sometimes unreliable. Not only is this aspect of crime a great concern of the text, but another value explored is the evil nature of capitalism.

The characterization of Burns, who is arrogant and mercenary, positions the viewer to believe that he deserved to be shot at. This is emphasised by the ominous music and extreme, awkward close-up shot of his stern, bitter face when introducing him. This text also comments on the power of big corporations and their lack of ethics, as they are mainly concerned with profit. Burns, who steals oil from the elementary school, is described as a “black-hearted scoundrel” and “selfish and arrogant” by various members of the community.

The accumulation of Burns’ wrongdoings are revealed in a montage of stills from Smithers’ point-of-view looking through his binoculars at all the groups and people Burns has harmed because of his nuclear plant. Smithers acts as a foil to Burns, yelling to him, “You must be very proud!… You have no moral conscience whatsoever! ” emphasising Burns’ evil character. In a way, Burns’ ability to avoid death represents the lack of ‘real’ justice as the ‘big’ crime of his heartless, careless character is not punished.

Thus, Burns’ main concerns are not only successful solving of a crime, but also the corruption of the justice system and the moral issue of capitalism. Therefore, despite which era and medium a crime text was composed in, they all follow the investigation of a crime while insightfully exploring associated social and moral issues including gender roles and voyeurism. In doing so, crime texts comment on the society in which it was composed and in turn, convey a valuable message about crime and punishment and other social issues to its audience. 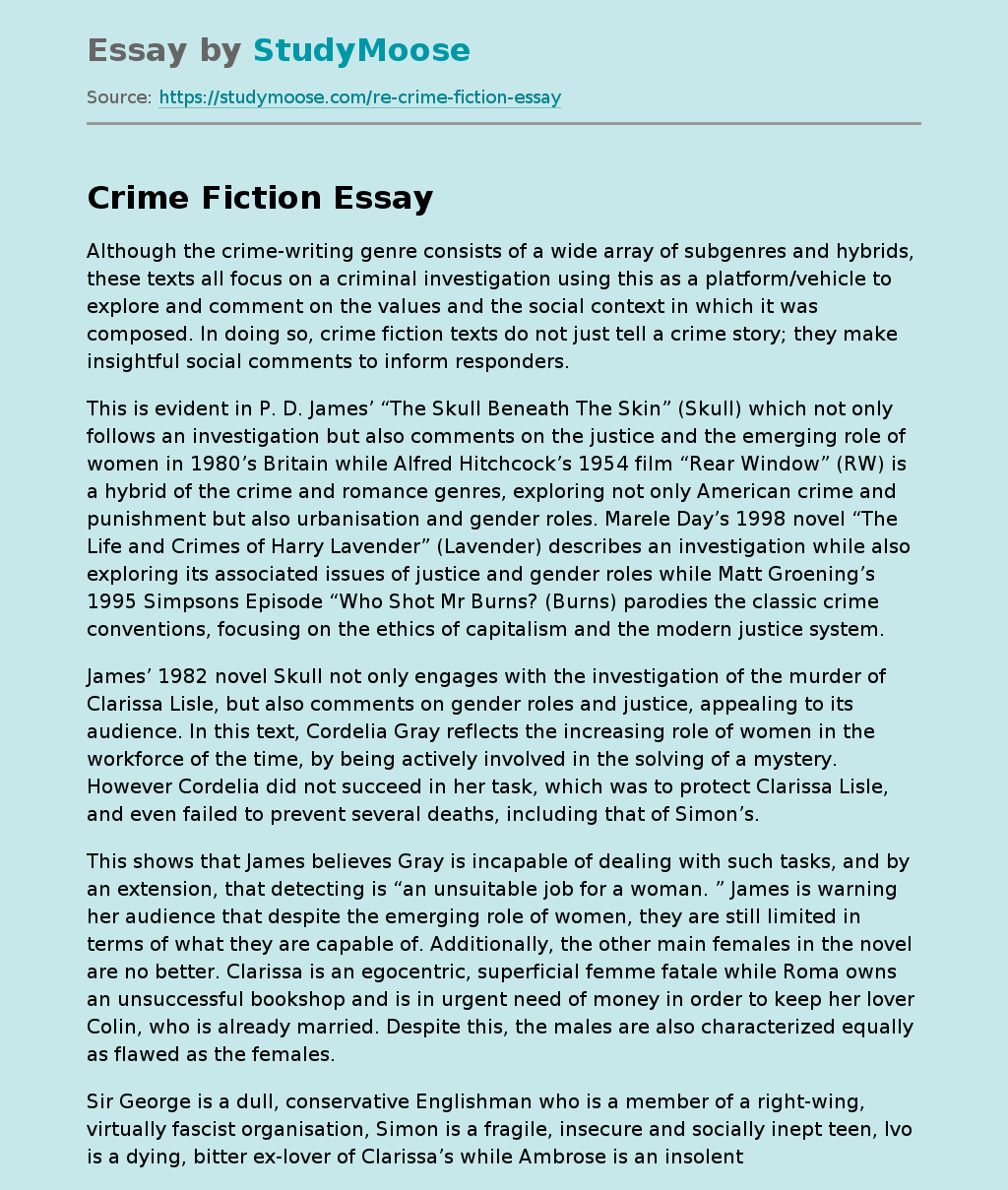