Depression is ongoing feelings of hopelessness, sadness, unhappiness, and causes a bleak outlook on life. When someone is suffering from depression they cannot be at the top of their game. A Raisin in the Sun is a play by Lorraine Hansberry that debuted on Broadway in 1959, which was the first play written by a black woman to be produced on Broadway. The story is based upon the family getting an insurance check; from Walter senior’s death, and the troubles of an African American family in the 1950’s.

Don't use plagiarized sources. Get your custom essay on
“ Rasin in the Sun Walter Character Analysis ”
Get custom paper
NEW! smart matching with writer

One Character, Walter shows almost every sign of depression throughout the play. He uses bad cooping skills, like alcohol, hurting his family meanwhile. Walter begins the play, as an unhappy man who is selfish but later matures into a better husband, father, and head of the household.

When someone is unhappy, they tend to make impulsive decisions. In the case of Walter Lee Younger, he follows those footsteps. He proves that statement to be true when he tells the character Mama, also know as “Lena Younger” how he feel his job is nothing, saying, “…Mama, that ain’t no kind of job… that ain’t nothing at all” (Hansberry 73).

When Walter is talking to Mama about his future, he tells her he feels as if it’s, “ … a big, looming blank space- full of nothing” (73). That darkness he is showing in that conversation proves to us, that he is very unhappy where his life currently stands. The unhappiness he is experiencing now will later help him become a stronger man.

Throughout the play, Walter shows the audience that he is a very selfish man, who will do whatever to get his way. In the beginning of the play, Walter says while talking to Ruth “I got me a dream” (33). He wants to buy a liquor store with his father’s $10,000 life insurance money, he tells Ruth, “…the initial investment on the place be ‘bout thirty thousand, …that be ten thousand each” (33). Walter is oblivious that Mama and Ruth want a house, and Beneatha wants money for college, showing that Walter only cares about himself. The Younger’s get a call from Walter’s work, Ruth answers and they
tell her that Walter hasn’t been to work for three days.

This shows that Walter is being selfish and missing work to grieve at a bar because Mama didn’t give him money for the liquor store, when he knows the family is struggling for money. Ruth confronts Walter and tells him, “…Mr. Arnold has had to take a cab for three days…” and “…If you don’t come in tomorrow that they are getting a new man” (105), Walter looked at her and laughed. Walter thinks that through his selfish acts that he is going to get his way, but little does he know that it is just going to add fuel to the fire.

Sometimes it’s better off to shut up, swallow pride, and accept wrongdoing. It’s not giving up, It’s called growing up. That is exactly what Walter Lee did in the third act, he proved himself that he could be a better man. When he was talking to Mr. Karl Linder about if they where going to accept his offer, “…to buy the house… at a financial gain…” (118), Walter was planning to accept his offer, but realized his family really wanted to move into this home. He told Mr. Linder that, “ …we have decided to move into our house because my father – my father he earned it for us brick by brick” (148) which is a very big improvement for Walter. Usually Walter does impulsive selfish acts, not thinking about his family. When Mama told Walter, talking about Travis, “ …You make him understand what your doing, Walter Lee.

You teach him good. Like Willy Harris taught you. You show where five generations done come to” (147) something triggered Walter to realize what he was actually doing and made him reject the offer, doing something exceptional for the family, making himself a better head of the household. Walter also tells Linder that he is proud of Beneatha, which is very unusual. He tells him, “… that’s my sister over there and she’s going to be a doctor – and we are very proud” (148), that is a very big statement that he told Linder. Earlier in the play he told Beneatha, “Who the hell told you to be a doctor? … go be a nurse like other women – or just get married and be quiet.” (38), Walter completely changed his view, and actually was proud of Beneatha. Making himself a better brother.

Walter Lee Younger makes a commendable change throughout the play. Walter becomes a better man, making himself better suited to be the head of the household. It took him time, but he realized what life was really about. He stood up for the family, showing responsibility, maturity, and love to the family. 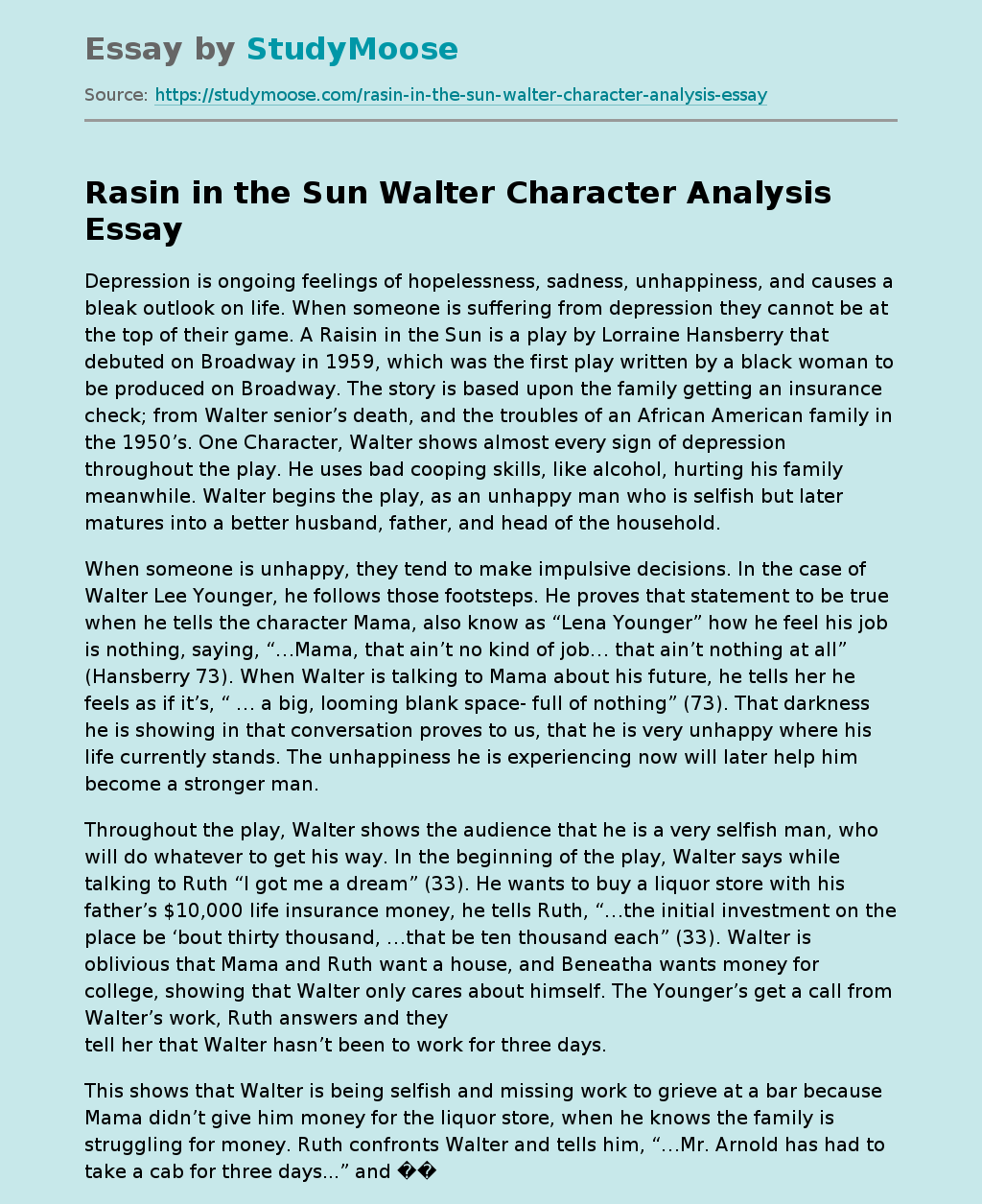