Racial Inequality and Discrimanation in America

In popular eastern culture, the word “race” wasn’t used as widely as it is used in western culture. Why is that you may think, well I come from Pakistan. The population is 197 million as of 2017. The area I grew up in, we did not have much foreigners around. It’s true, there aren’t many foreigners that reside in Pakistan so the idea of race was unknown to me until I moved to America. Now when I moved here, the minute I step foot here I was categorized by my race.

Don't use plagiarized sources. Get your custom essay on
“ Racial Inequality and Discrimanation in America ”
Get custom paper
NEW! smart matching with writer

I did not know what race meant let alone picking if I was Asian, American Indian etc. on the documents. I went to high school and again the same thing, history books were filled with Race and I soon begin to realize that Race along with citizenship and immigration is a huge part of American history and where American history stands today. My question still stands though, Is Race really understood in American Society today? Sure, there have been changes made, some of which we will discuss in this paper.

Let’s start with the great Martin Luther King Jr. Even after civil war the tragedy of norms of slavery still existed. Back in the day, it was the much obvious representation of race associating the black community to slavery. Being born in a colored family automatically denied a person of various rights, to the point where even going out to eat in a restaurant, or having the luxury to play a public sport became a matter of racial discrimination and outrage for those specific individuals.

Today, however, that racial discrimination has formed another shape. Sure you might find colored folks having equal paying jobs (not many) or being publicly recognized and followed, and the custom of slavery has died. But, “racism still finds its way behind closed doors, through subliminal messages/acts/initiatives.” To further explain this quote, Ta-Nehisi Coates wrote in his article “The lives of black Americans are better than they were half a century ago. The humiliation of WHITES ONLY signs are gone. Rates of black poverty have decreased. Black teen-pregnancy rates are at record lows—and the gap between black and white teen-pregnancy rates has shrunk significantly. But such progress rests on a shaky foundation, and fault lines are everywhere. The income gap between black and white households is roughly the same today as it was in 1970. Patrick Sharkey, a sociologist at New York University, studied children born from 1955 through 1970 and found that 4 percent of whites and 62 percent of blacks across America had been raised in poor neighborhoods. A generation later, the same study showed, virtually nothing had changed. And whereas whites born into affluent neighborhoods tended to remain in affluent neighborhoods, blacks tended to fall out of them.”

Surely, the lives of black Americans can be said to be better today than it was half a century ago. Rates of poverty for black Americans have decreased, along with black teen-pregnancy rates which have marked an all-time low. Moreover, discriminatory signs such as “Whites Only” or “No Dogs, Negros & Mexican” that caused humiliation are not seen anymore. However, race still holds a major role in other aspects of the daily lives or communities. Even though poverty levels have decreased, the gap in income between white and black households is roughly the same as it was four decades ago. Such inequality in income still shows the superiority of one race over another, which leads to contrasting lifestyles. As found in a study by Patrick Sharkey, a sociologist at New York University, the percentage of blacks living in poor neighborhoods across America was almost over 50 percent more compared to whites. And the blacks that were born in affluent neighborhoods, tended to fall out of them. All of this goes back to the income gaps led from racial discrimination. understood

Another important factor is to consider how being a certain race in America has not made anything changes is the recent ICE raids. Sure, coming to a country illegally is a crime and unethical but to deport people who are actually providing immense importance to the economy is purely racist. As Paul Spickard mentioned “Some People in the United States just want unauthorized immigrants to go away, no matter when or how they came to the United States, no matter how much they have pay in taxes over the years no matter how deeply entwined their lives are with American society, no matter whether their children are U.S citizens, no matter how much they have to contribute here.” This shows that it isn’t about how immigration should be done properly, it’s about being racist. Imagine coming home from school to no parents because they got caught up in the raid done by ICE. Imagine going in the system when your parents are very much alive and are willing to take care of you.

In conclusion, if I had to answer the question how have changes over time played a role in how race in understood and functions in America, I would say it’s exactly the same as it was years and years ago. We are now focused on bigger issues, moving from public shaming and humiliation to the more important aspects of income gaps and inequality. These are issues that need to be resolved as early as possible, otherwise factors such as social inequality will grow even deeper than they are today and various communities will always struggle to improve their lifestyles. If we overcome these racial discrimination factors, it will definitely lead to a more balanced and a way better American society compared to the one we live in today. We will also be categorized and demonized by the color of our skin tone. It would be helpful if treating people by their race would be put aside and we would be treated as human beings first. Our actions, our intelligence and what we have to offer would be considered before our race.

Racial Inequality and Discrimanation in America. (2021, Feb 17). Retrieved from https://studymoose.com/racial-inequality-and-discrimanation-in-america-essay 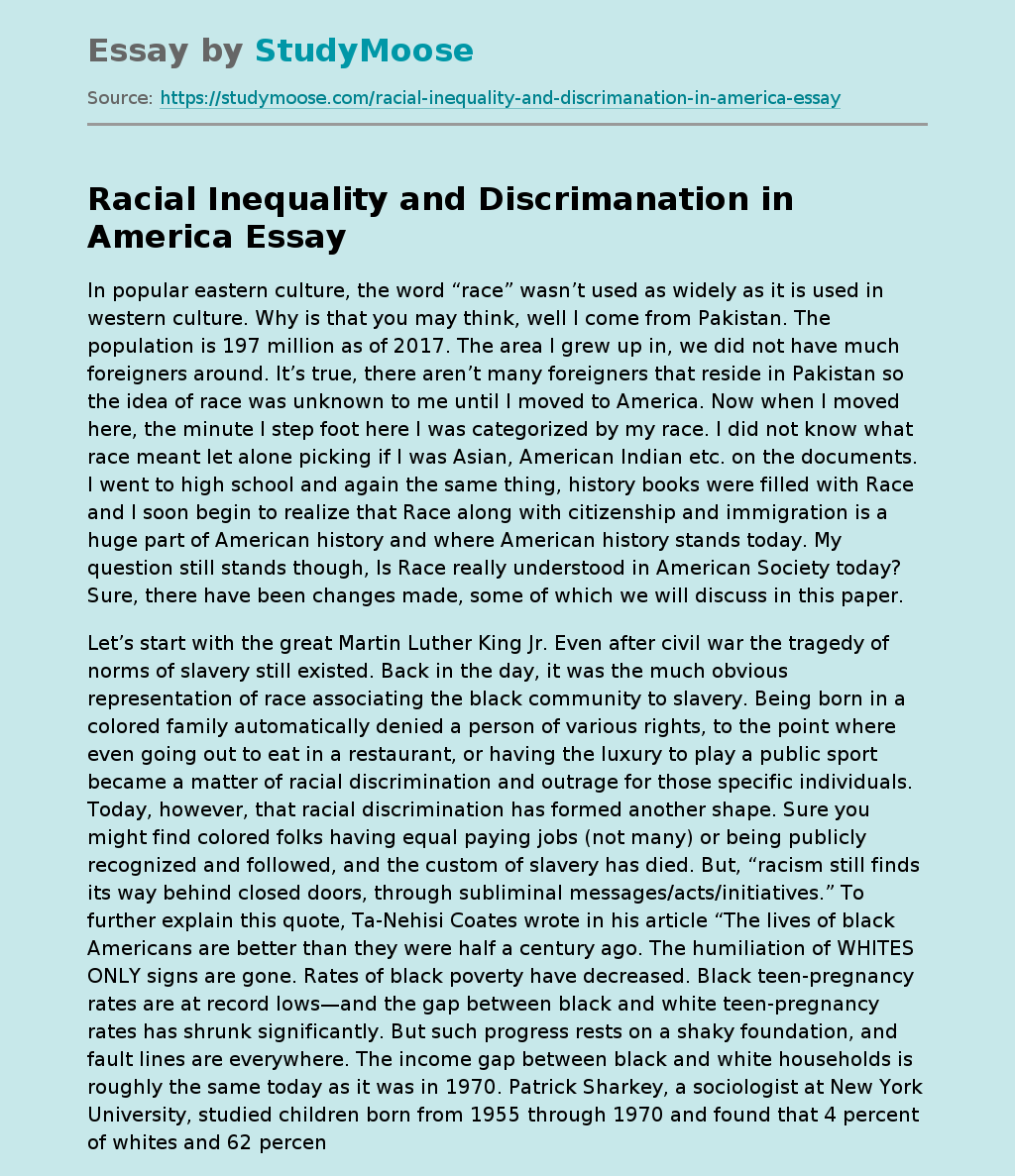