Racial and ethnic discrimination continues to concern juvenile justice systems nationwide, the data supports the theory of racial bias and disparities in juvenile court. In 2001, black youth were four times as likely for severe sentencing than white juveniles. Nearly 60,000 youth in the United States under age 18 are imprisoned in juvenile detention centers and prisons due to stereotyping them as devious hard criminals. Judges and arresting officers believe confining and cutting black youth off from their families will keep them from being a threat to society.

Don't use plagiarized sources. Get your custom essay on
“ Racial Bias in Juvenile Incarceration ”
Get custom paper
NEW! smart matching with writer

Such exposure and violence in juvenile corrections facilities, leads to trauma that can very well harm their development with lifelong negative consequences leading to the stigma of labeling theory. Why are white juveniles less likely to be convicted of the same crime the black juvenile was convicted of? How do jurors decide who is most dangerous to society the black kid or the white kid? Jurors use evidence and nonevidential information during a trial, as well as their personal beliefs which proves bias verdicts.

This report will show that black youths are at greater risk for pretrial detention, as well as being removed from home, versus a white privileged wealthy kid going home with an ankle monitor. Noting the obvious theoretical explanations of preexisting stereotypes and unfair trials based on social status and ethnicity.

The unfair treatment and harsh punishments of minorities has become noticeable especially when giving a juvenile life without parole. Why do prosecutors continue to give minorities harsher sentences than white youth for similar crimes? Juvenile justice system treats minority youths and white youths differently, not all states are affected by these trends.

In 2003 Black youth were 3.7 times as likely as white youth to be convicted of a crime. By 2013, that ratio had grown to 4.3, a 15 percent increase in the disparity. Between 2003 and 2013, 33 states had higher black/white commitment disparities than 10 years before, and 17 states saw decreases or no changes. This report will provide enough quantitative evidence to support that the justice system for black juvenile offenders has become much more disciplinary with harsh sentencing due to lack of proper representation leading to harsher sentencing than white juveniles with proper representation.

Black youth are more than twice as likely as white kids to be arrested, the data shows this not because black kids are committing more crimes, but because black kids are stereotyped as guilty and dangerous. A legacy of our racial unjust history that marks youth of color causing frequent stops and searches by police. This provides truth to the notion of harsh indictments with poor plea negotiations with the probability of being denied bail. Due to lack of finances and connections, Minorities are subject to wrongful convictions and unfair sentences increasing the rate of overcrowding in correctional facilities. The purpose of this report is to convey the history, to discuss within the continued historical problem and the major federal cases involving charges of racial discrimination in the criminal justice system.

In a juvenile justice system that treats minorities and white youths differently, is what makes undeniable to see how skin color plays a role in judgment. The United States needs to ensure equality and fairness in the process of both white and minority youths, it must focus on ways to prevent juvenile crime and a plan to eliminate bias systems that affect decisions involving juveniles. For example, one instance of system bias is the perception that black families are weaker and less able to provide supervision than white families. Nonwhite youths and their families are less likely to possess the social and economic resources (for example, the ability to retain private counsel and get favorable plea bargains) that are available to whites. Poverty and unemployment are also partly to blame for the differential involvement of minority youth in crime and their high incarceration rates.

The justice system in the United States has an enormous shortcoming, between incarcerated blacks and whites. The hypothesis proposes that this is a result of African Americans committing more crimes that result in criminal justice processing. Proposing that this is a result of discrimination by the criminal justice system. Inmates currently serving sentences which resulted from crimes committed as a minor found that 93% of them are black or Latino. These numbers represent a clear racial disparity in sentencing.

Equal to the juvenile detention and sentencing for the country, analysis shows roughly 60% of all juveniles were black and tried as adults received life sentences. (Bridges, G., & Steen, S. 1998). Judges, prosecutors, jurors, and police/detention officers all commonly perceive black juveniles as less innocent and childlike than white children. Black teens age is commonly over-estimated by an average of 4.5 years, black youth as young as 13 could perhaps be mistaken for18 years, making it easily acceptable for passionate prosecutors to treat them as an adult defendant. Minorities and black youth who are treated differently from the white youth are treated like harden criminals. A segregated society impacts the way children think of themselves.

Gwen Bergner writes about “the doll test” Black Children, White Preference: Brown v. Board, the Doll Tests, and the Politics of Self-Esteem. In the 1940s, psychologists Kenneth and Mamie Clark created and conducted a series of experiments known as “the doll tests” the purpose of the test was to study the psychological effects of segregation on African American children. The black children were given the option between the white doll and the black doll, when asked to point to the nice doll they pointed to the white doll. When asked to point to the doll that looks like them, or the doll that is bad they hesitated before pointing at the black doll. The test showing white preference among African American children that prompted the argument for multicultural school curriculum. This study confirms how harsh stereotyping is and how quickly kids pick up on ugly adult behavior making them believe dark skin color is not pretty or good.

With many countries affected by this racial bias how do children stand a chance? Southern states execute laws targeting African Americans for different punishments. Several states changed the penalties for stealing and grand larceny. Congress passed the first of a series of civil rights acts even the Fourteenth Amendment. Although the Fourteenth Amendment exists for all Americans, it was set to address African Americans, disparities against blacks by white slave owners. In the late 1980s, backlash against the comparison of policies such as affirmative action gained force. Yet black juveniles continue to be the victim of discrimination against white kids.

How is the determination made about how a juvenile will be held accountable in court for their actions? Starting with the obvious, Society is all about the social issues that continue to tie up the juvenile justice system, Race. As stated in, Racial Stereotypes, Attitudes, and Evaluations of and Behavioral Intentions

A case judgment questionnaire was given before and after deliberation. Jurors indicated their individual robbery verdicts (not guilty or guilty) and individual murder verdicts (not guilty or guilty). Beliefs about whether the defendant should have been tried in criminal court rather than juvenile court (i.e., “Waiver Beliefs”) were measured on a 6-point scale ranging from 1 (Definitely tried in adult criminal court) to 6 (Definitely tried in juvenile court). (Brigham, J. (1971).

Notably showing how unfair and poor the court system can be to underprivileged youth. The truth is no matter if born or naturalized in the United States they too are entitled to equal protection by the law, regardless of race. Also compared to ‘due process’, which prevents citizens from being illegally deprived of life, liberty, or property.

Surveys have shown the profound racial disparities in the juvenile justice system; African American and Hispanic youth are more likely to be tried as adults. They are more likely to receive longer sentences, even when charged with the same offense as whites juveniles. It said that white middle-class kids get a break and are given more opportunities such as not being locked up and returning home to be able to further their education. Is status and race who determines who will stand trial and who will walk away with a slap on the wrist? Studies agree with this notion, statistically deeming it correct.

What has been done nationally to prevent disparities in juvenile court? In 1974 Congress started what is known today as the Juvenile Justice and Delinquency Prevention Act, it supports the Office of Juvenile Justice and Delinquency Prevention designated to help local state agencies to prevent delinquency and improve the juvenile justice system. They were designated to monitor and assess unreasonable minority confinement with the discovery of 20 percent hike punishable by a loss in federal funding from states that did not comply. In 2001 racial disparities from unequal minority “confinement” to unequal minority “contact” as more evidence demonstrated that racial disparities were present at every level of processing within the juvenile justice system.

Arguably the evidence supports the theory of the racial disparities’ minorities and blacks face in court in comparison to the white kids that are privileged, or not. There is no comparison, although the percentage has decreased today, and white juveniles are being prosecuted and made accountable for their actions it does not make up for the kids that have lost their spirit while incarcerated for a small crime. This theory argues that, Black and Hispanic population has a higher rate of poverty than whites. The juvenile justice system is supposed to focus on successful rehabilitation into the community, data shows the long-term consequences of incarceration. The validity in disparities in the justice system really does exists. With the belief of the less advantaged who are poverty stricken, unemployment, with no educational background, are more likely to be racially profiled as a black person or a minority and with the probability of injustice involvement. 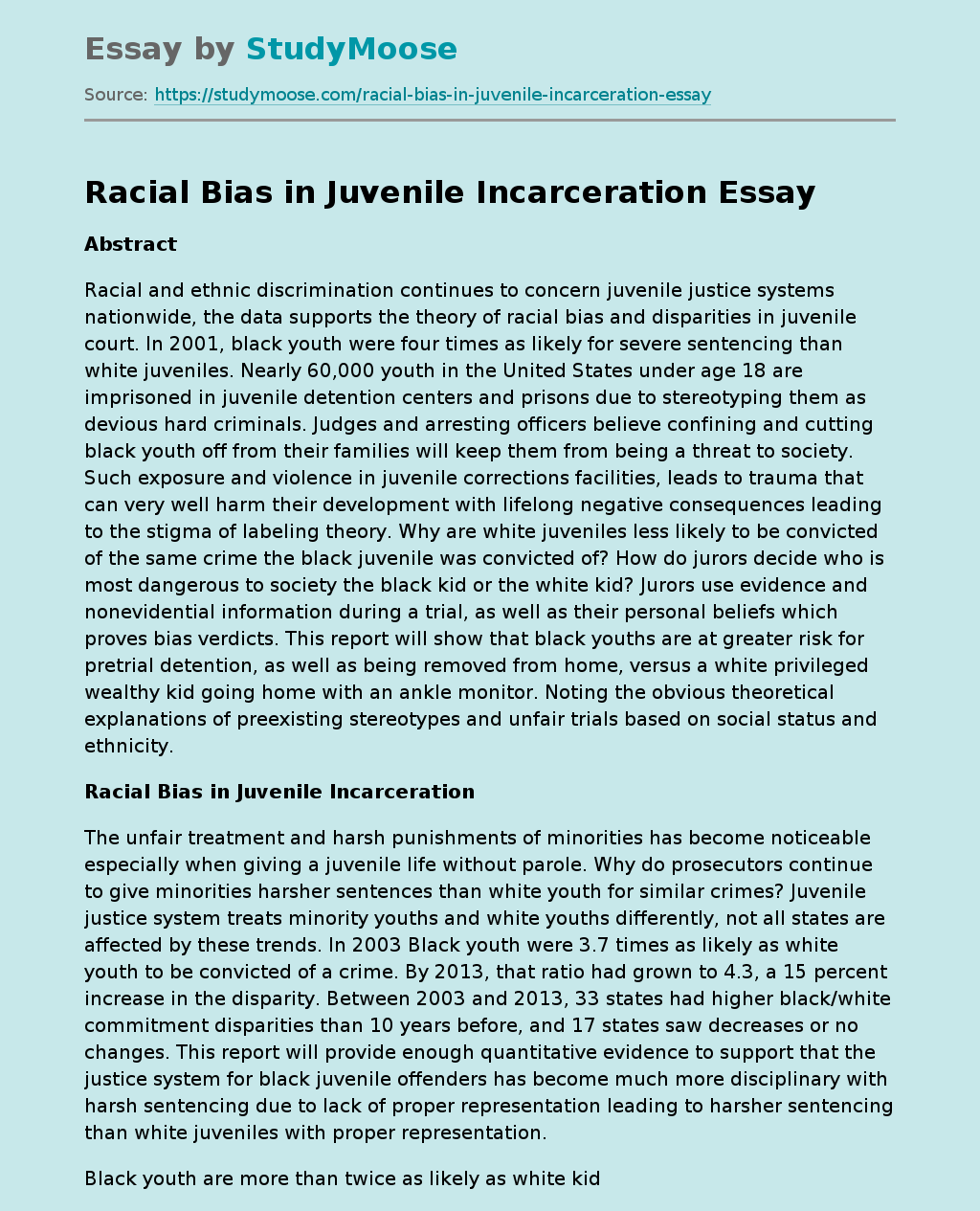