Race and Racial Profiling in America

Fear causes police officers as well as civilians to act over their position that creates a pattern of unarmed blacks being shot because, they were “fearing for their lives”, in these cases it’s rarely been blacks purposely trying to provoke or harrass it’s always the other way around.“ Trayvon Martin is a prime example and victim of racial profiling who died at the hands of George Zimmerman. “After discovering that Zimmerman, a stranger was staring at him Martin, a guest in the gated community told his friend Rachel Jeantel that a strange man was following him and kept looking at him”(willing).

Don't use plagiarized sources. Get your custom essay on
“ Race and Racial Profiling in America ”
Get custom paper
NEW! smart matching with writer

Many of the black Americans killed by police officers and/or other Americans are rarely convicted of these crimes due to flawed laws which takes it back to the Trayvon Martin Case. “Despite being instructed by the 911 operator to remain in his vehicle, Zimmerman, who was carrying his gun, failed to follow the operator’s directives, continued to follow Martin, and ultimately confronted the teenager. By choosing to follow Martin, Zimmerman was also ignoring the instructions of Wendy Dorival, the Volunteer Program Coordinator for the Sanford Police, who previously told neighborhood watch volunteers at the Retreat at Twin Lakes not to “confront someone suspicious” because “[o]ur officers are the ones who are paid and trained to go out and deal with it.

”(Willing). Although Zimmerman didn’t follow directions he was able to play victim when he had the “confrontation” according to him the only remaining survivor. When in court he was able to use the stand your ground defense. Many felt that Zimmerman was attacked by Trayvon after he tried to question him about him being in the neighborhood. According to the stand your ground law Zimmerman was found to be not guilty of murder. The stand your ground law allows individuals to stand their ground rather than retreat if there are reasonable grounds to believe that such action can prevent bodily harm or death. This law is flawed, how can you prove the person that they killed was being threatening? How can we be sure that Trayvon Martin wasn’t standing his ground the night he was followed by a stranger and killed. Many of the black people that have tried to use this defense couldn’t, even when they were not facing murder charges.

How was Zimmerman able to use this defense with all the evidence that proves his story was inaccurate from the beginning? Many of the jurors felt that Zimmerman was guilty, but due to the way the law was written and his charges Zimmerman was unjustly acquitted of murder.“A surveillance video of Zimmerman at the police station on the night of the shooting later showed he had no visible injuries or blood on his clothing, further casting doubt on Zimmerman’s claim he had been attacked by Martin”(”Self-Defense’). The injuries that he sustained only showed that Trayvon was fighting for his life from a stranger who was attacking him instead of Zimmerman’s claims of being attacked. Unfortunately, Trayvon was not armed that night as well or even in death offered the defense of using the stand your ground law. Instead Zimmerman’s account of what happened was readily accepted. This is why he was not initially charged until the public outcry forced the police and prosecutors to look into the case further.“Sanford police did not charge Zimmerman, accepting his claims of self-defense and saying he was protected under Florida’s ‘Stand Your Ground Law,’ which allowed people to use deadly force in public places if they believed that they or others were in grave danger.” (”Self-Defense’).

Why are white people offered protection under stand your ground while blacks who try to use the law not protected. For instance, Marissa Alexander an African American in Florida who had just given birth to her abusive husband’s child spent six years either locked up in prison or confined to house arrest after being convicted of aggravated assault in 2012. Alexander was originally sentenced to 20 years for firing a warning shot in the air with no one being injured. A woman with a history of abuse was denied the protection of stand your ground while Zimmerman walked away from a murder charge. With Zimmerman’s acquittal and other cases like his, it seems that white comfort is more important than black people’s especially black males’ safety. “ Specifically, it explicates how White people have increasingly turned to protecting “the white space” as a means of maintaining white authority and advantage during the post-Civil Rights era.” (Willing,.)

In the last fifty or sixty years not much has changed with the judicial system concerning people of color. Who would have thought in 1955 with the high profile case of Emmett Till, a fifteen year old boy tortured and killed by a group of white men who would eventually walk away from murdering him that in 2019 minorities are STILL dealing with unfair treatment under the law. In 1955 minorities were murdered for simply looking at a white person in what is perceived as a disrespectful way while today minorities are being killed for what they wear which is perceived as being threatening or criminal like.“Many of the demonstrators wore hooded sweatshirts to show solidarity with Martin’s family and in response to widely criticized remarks by television host Geraldo Rivera, who had suggested that the hooded sweatshirt Martin was wearing when he was killed was partly responsible for his death because it made him look threatening.”(”Self-Defense’).

Many people of varying races wear hoodies, baggy clothes, and other clothing that are considered urban gear. Yet, these other groups aren’t criminalized for doing so. If police and white America could be honest about their fears, mistrust, and biases concerning people of color maybe conversations can help dispel these misconceptions. It is up to all Americans to work together to break down the walls of discrimination. “Two months ago I had a nice apartment in Chicago. I had a good job. I had a son. When something happened to the Negroes in the South I said, `That’s their business, not mine.’ Now I know how wrong. I was. The murder of my son has shown me that what happens to any of us, anywhere in the world, had better be the business of us all.”According to Emmett Till’s mom Mamie, the horrors blacks faced in the South was not her concern because, it didn’t directly affect her or her family. This type of thinking still exists today. Many people lack empathy for others’ issues until they have to face similar situations and want support from family, friends, or the community. It doesn’t matter where you live, how much money you have, or how famous you are you will come across some type of racial profiling/discrimination as a witness or as a victim. As was stated previously the only way discrimination can end if the community works together. Everyone should have compassion and empathy for others because you would want someone there for you if you are being treated unfairly.

Racial profiling and the stand your ground law furthers the divide among white and black Americans and does nothing for justice, which is supposed to be equal and impartial. The only way ALL Americans can heal and come together as a truly united front is by working together to rid our land of these unjust practices and laws and heal relations between African Americans and their untrust of police officers.

Race and Racial Profiling in America. (2021, Feb 05). Retrieved from http://studymoose.com/race-and-racial-profiling-in-america-essay 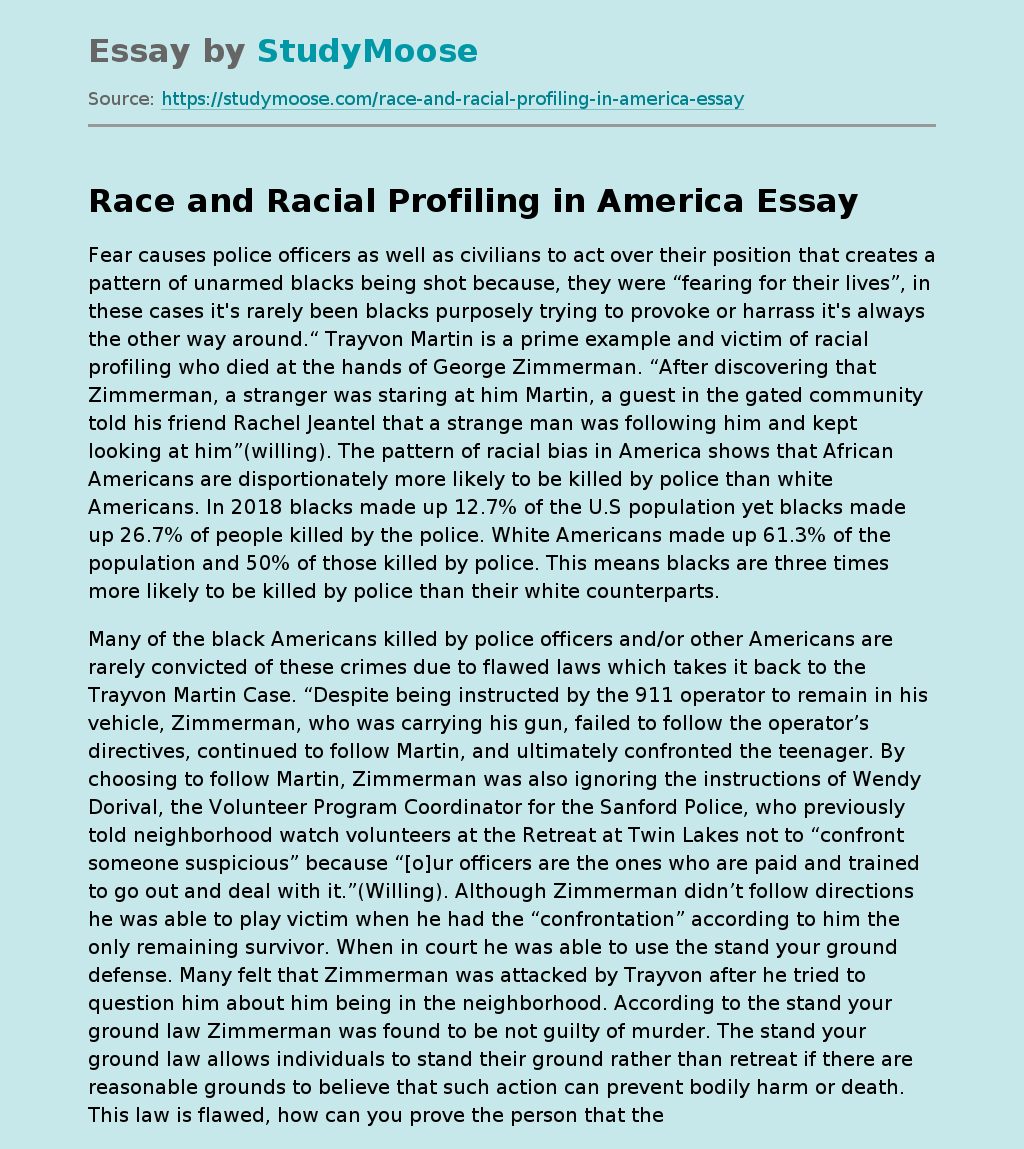