Purpose of Anthem for a Doomed Youth

Owen’s purpose in writing Anthem for a Doomed Youth is to reveal the cruel reality of war which was always hidden from the public in World War One and to show anger to the people who sent him to the trenches. He says in his preface “All a poet can do today is warn….” this shows he aims to prevent war from happening in later generations.

One way that Owen conveys rage is through the men not getting the recognition that they deserved.

Don't use plagiarized sources. Get your custom essay on
“ Purpose of Anthem for a Doomed Youth ”
Get custom paper
NEW! smart matching with writer

He does this by dehumanizing the soldiers and comparing them to “cattle” which shows that they were only seen as instruments of war by the government. Throughout the poem the men not recognized as individuals, but are referred to as “they”, “these” or “them”, by referring to them as a collective he gives a tone that people other than family did not care about the men’s well being at war. If and when the men do die, the prayers to remember them are ‘hasty’ and careless, this is because too many people die in a day to give the true amount of respect they needed showing the futility of war.

In the last line of the poem “a drawing down of blinds”, this metaphor infers death but in different ways. Firstly, in Owen’s time if a funeral car drove past people would pull their blinds down to show respect to the deceased this shows that everyday someone in a town will die and did not come home, so the ‘blinds’ are drawn for funerals that did not take place as men were lost in battle.

At the end of everyday blinds are drawn down this can symbolize the sun also going down at the end of a day or finality when someone dies, the blinds of their life are drawn. Finally it infers that people might have drawn their blinds down, or turned their back, to the truth about the war, because maybe it was too brutal to think of their loved ones in the middle of it.

Owen also proves in this poem that people, on the battle field and back in Britain, lost their faith in God during the war. Even the title of the piece is ironic in a way. An “anthem” is usually written for a religious purpose, but when contrasted with a “doomed youth” it shows not only that war was falsely portrayed as heroic to the men, but also that the war was “doomed” from the start and not even God could have helped them. Also, no one stopped to mourn the fallen, the only ‘choirs’ are the voices from the ‘shells’ and bombs on no-mans land.

Whilst the men are dehumanized, the rifles, shells and other machines are personified and given human feelings such as “stuttering” and “demented” showing that the equipment of war meant more to the government than the men. Also, world war one was the first war to introduce industrial methods of warfare so the guns were seen as better and given more care than the men. When dehumanizing the soldiers and personifying the arms Owen is criticizing the war by saying that the guns mean more than the men controlling them. But although the guns are given feelings and characteristics, they are negative. The artillery are “stuttering” which can be caused by shell-shock this implies that the soldiers ‘disabilities’ have been transferred to the weapons.

The form of the poem is a sonnet, sonnets first started out as romantic but truthful poems by poets such as Wordsworth. By Owen using a sonnet as the poem’s form he conveys irony and conflict as the poem is about aggression and struggle.

To conclude, Owen uses Anthem for a Doomed Youth to criticize the war and to expose the true reality of the trenches, he does this by using many language techniques such as dehumanization, metaphors, oxymoron, onomatopoeia and personification.

Purpose of Anthem for a Doomed Youth. (2016, Oct 26). Retrieved from https://studymoose.com/purpose-of-anthem-for-a-doomed-youth-essay 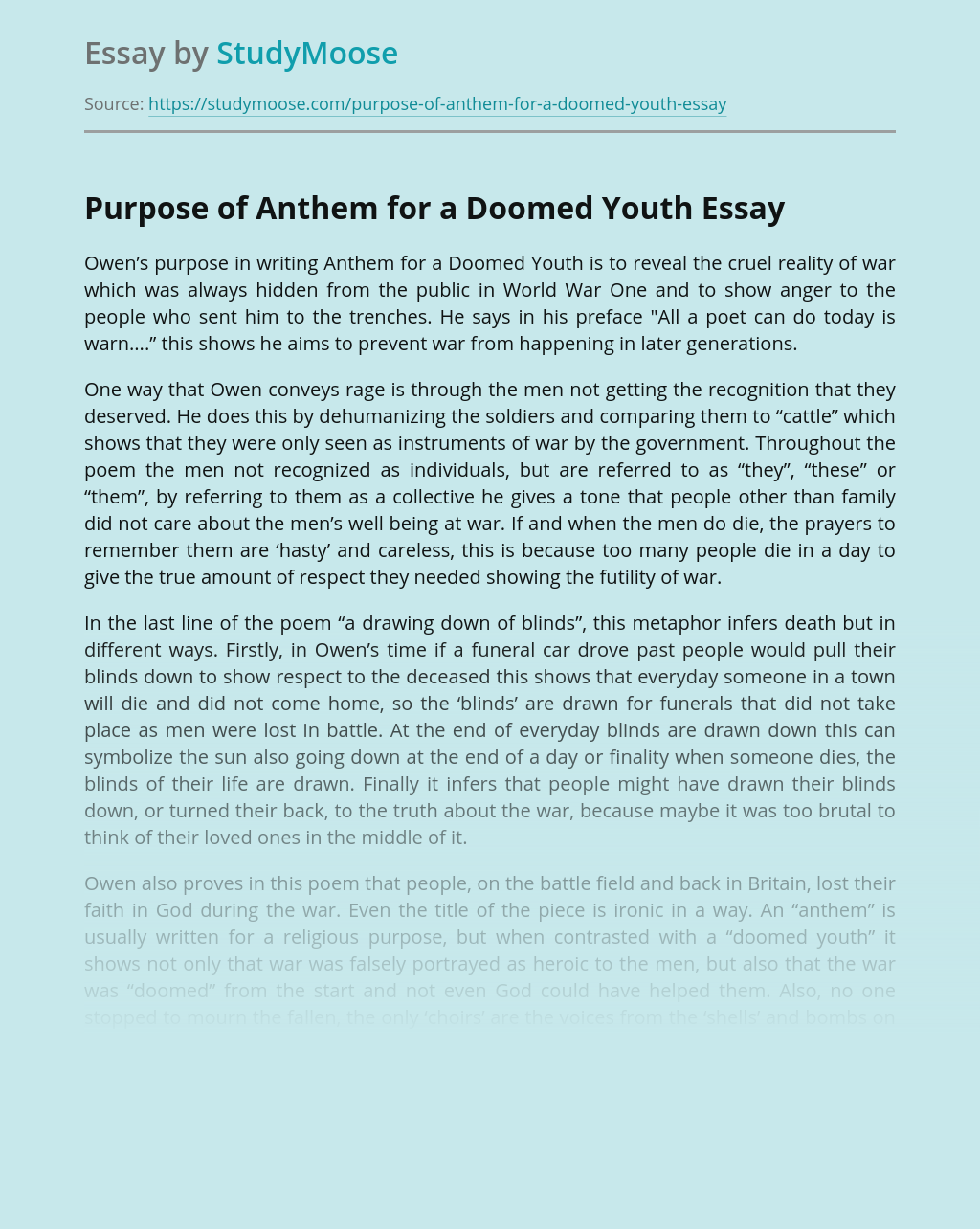