"Anthem For A Doomed Youth" By Wilfred Owen

“Anthem for Doomed Youth” is an elegy in which Wilfred Owen conveys his heart felt sadness and disgust for the loss of life in World War I. This poem shatters the fantasized images of war by juxtaposing the opposite worlds of reality and the romanticized rhetoric that distorts it. He writes about the true experience of military death, and effectively expresses these powerful sentiments in only fourteen lines by use of a somewhat violent imagery that is compounded by the constant comparison of reality to myth.

Don't use plagiarized sources. Get your custom essay on
“ “Anthem For A Doomed Youth” By Wilfred Owen ”
Get custom paper
NEW! smart matching with writer

The poem is intriguingly entitled, “Anthem for Doomed Youth.” Beginning with the title, Owen places his words into a context that contrasts with his message. An anthem is usually a patriotic song of a group of people, country, or nation as a means to honor it, such as in the National Anthem. An anthem is a song that is supposed to conjure up feelings of chauvinism, and love for one’s country or group. Here in America, our National Anthem especially reminds us of the soldier, who is constantly juxtaposed with the image of the” Star Spangled Banner”.

The National Anthem is thought to be something that is synonymous with praise for one’s country and support of its troops. For Owen to name his poem “Anthem for Doomed Youth” implies that those Doomed Youth have no other anthem to honor them. Owen is saying that the experience of the dying youth is not the one that is conveyed in the National Anthem. His argument is that his poem expresses the true sentiment of the dying youth of war.

In the first sentence, Owen begins describing what he views as the authentic image of war by use of an eye-catching analogy. This analogy postulates that the youth who are being massacred are dying like cattle. This is such a striking phrase because cattle live and die the worst of lives. Cattle are bred only for mass slaughter, and death is inevitable for them. They are kept in confined places, often surrounded by fences and barbed wire. Cattle are also considered to have no purpose in life except to serve and nourish others. It is clear that this comparison of dying soldiers to cattle is not a flattering one, and it is a comparison that would not be given by an advocate of war. It is in direct opposition to the description of valor and honor that comes forward from the romanticized description of soldiers. Owen places this striking analogy at the end of a rhetorical question that he himself answers in the next few lines.

The question that Owen asks is, “What passing bells for these who die as cattle?” The passing bells refer to the bells that are tolled after someone’s death to announce that death to the world. Owen says that unlike a funeral procession the only things that announce the death of these soldiers are the sounds of the instruments that killed them. He answers his opening question by saying that the only bells that are tolled are the indelible sounds of war and death. When describing those sounds of war, Owen projects upon the reader the evil pastimes of war through words like “monstrous,” “anger,” and “rattle.” These are words that give the reader a taste of fear, and a sense of echoing loneliness.

The second stanza continues in its comparing of the sounds and images of a funeral procession to the sounds and images of a battlefield. He uses vivid words to show the harshness of war in this stanza just as he did in the first stanza. However, in the second stanza, Owen focuses on imagery of sadness and remorse rather than evil and horror. Owen seems to be sequentially describing the problems with the war in the first eight lines. First, he ingrains on the reader the sights and sounds of the battlefield. Then, he expresses the after effects of sorrow and sadness. For example, the second stanza contains the words “mourning,” “wailing,” “bugles,” “sad,” and “shires,” all signs and descriptions of remorse.

The concluding sestet brakes off greatly from the rest of the poem. The first two stanzas use heavy imagery to illustrate the horrors of war, and the loneliness that accompanies it. The stanzas lament over the fact that the soldiers die a death of vanity, and are not remembered. The words that are used are very harsh and acidic in that they leave the reader with a feeling of the bloodshed and loss. The last stanza is more melancholy and reflective in its words than the previous two. And unlike the first two stanzas, the question that introduces them is answered in a way that leaves the reader with some type of solace. This feeling of hope in the sestet is culminated in the last lines of the stanza, showing that the boys will be remembered by some.

Owen’s sobering imagery is greatly empowered through his juxtaposition of conflicting ideas of war. Another example of this is his formatting the poem into a sonnet. Sonnets are normally written about themes of love and romance. Owen wrote about death and disenfranchisement. The use of the word “anthem” in the title adds to this style as well. An anthem is usually a superficial, upbeat, sappy song. This anthem is sad, gloomy, and somber.

This usage of irony gives the poem a shocking effect by packaging the text of the poem in the form of a sonnet and anthem while the poem has a message that is antithetical to those two genres. This seemingly paradoxical approach makes the reader feel the power of Owen’s concepts because those concepts are so strongly contrasted by conflicting images.

"Anthem For A Doomed Youth" By Wilfred Owen. (2016, Jul 19). Retrieved from https://studymoose.com/anthem-for-a-doomed-youth-by-wilfred-owen-essay 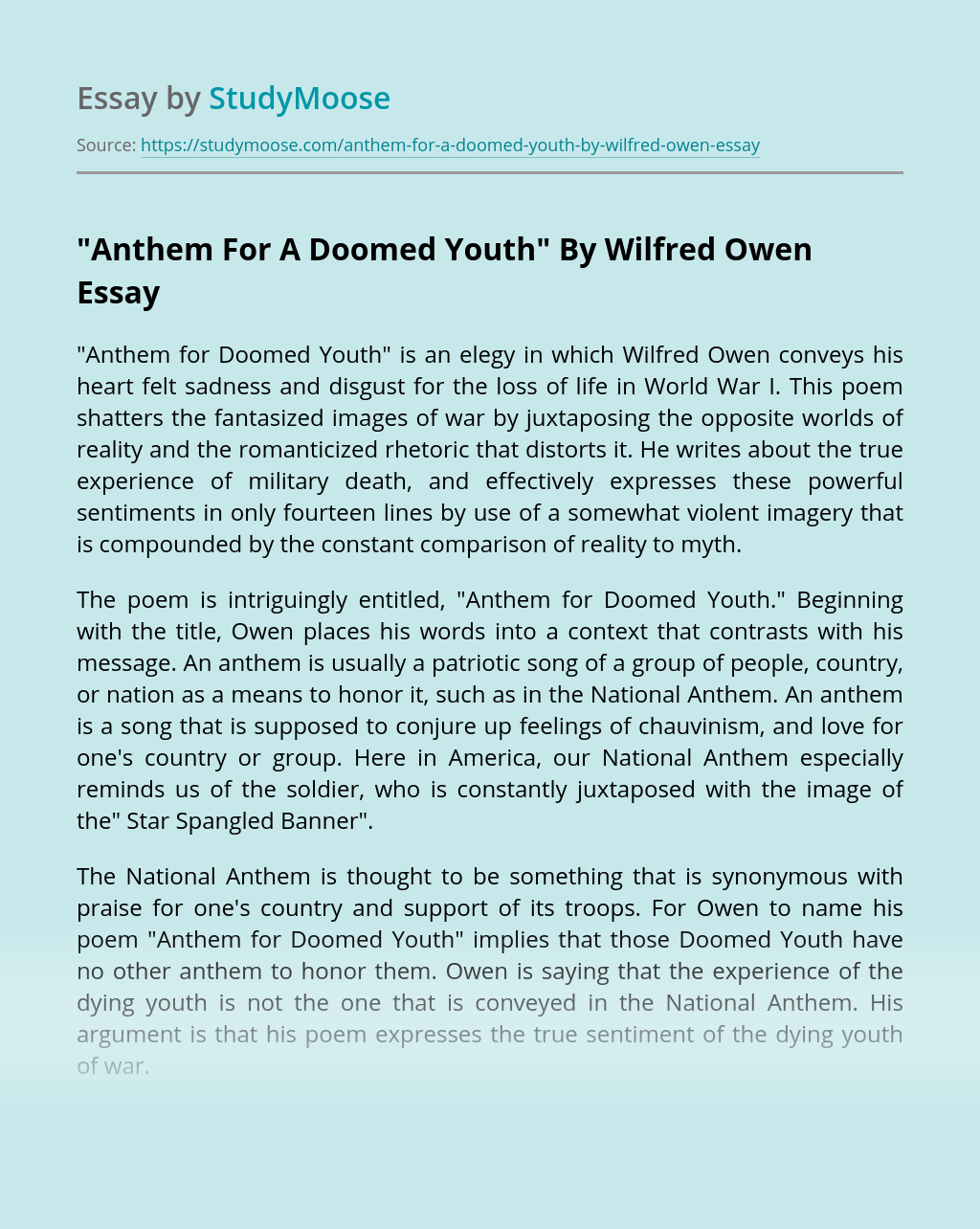