A Critical Analysis Of "The Send Off" By Wilfred Owen

This essay intends to examine the poem “The Send Off” by Wilfred Owen. Owen wrote this poem while he was stationed at Ripon army camp. He was based there after being a patient at the Craiglockhart War Hospital, this is where he met Robert Graves and Siegfried Sassoon. Owen was at Ripon between March and June, 1918 and died in action on the fourth of November 1918.

“The Send Off” is a poem about some troops that have just come from a sending off ceremony before departing by train, presumably to the frontlines of World war One.

Don't use plagiarized sources. Get your custom essay on
“ A Critical Analysis Of “The Send Off” By Wilfred Owen ”
Get custom paper
NEW! smart matching with writer

The poem has many themes running through it. Some of these are death, strangers, flowers, secretiveness and healing.

The poem opens with a very claustrophobic first line – “down the close, darkening lanes they sang their way”

The words ‘down’, ‘close’ and ‘darkening’ provide the reader with a feeling of doom, claustrophobia and fear of uncertainty. The image of going ‘down’ provides the reader with the images of death, darkness, being buried, walking the trenches and going to hell.

This opening line also provides a rather prophetic image of people being sent to concentration camps, by train, in World War Two. Further enhanced by ‘siding shed’. From the phrase “they sang their way2 there is an opposed feeling of happiness to the claustrophobia. However, the singing changes from happiness when the poem is read again and the other themes are considered.

Flowers are the next prominent theme displayed in this poem. They appear in line four, stanza one and line fifteen, stanza three.

“Their breasts were stuck all white with wreath and spray

“Nor there if they yet mock what women meant

Who gave them flowers.”

In this line the poet is asking if the women, who gave the troops the flowers, realise that the flowers are symbolising the reality of the horrors and the almost certain death that these troops are going to face in the frontline.

The theme of funerals is picked up again in stanza two –

“Dull porters watched them, and a casual tramp

The strangers, the porters, tramp, guard and women are all watching the troops, covered in flowers march from their army camp to the train station. The troops, in deliberately, are predressed for their funeral and there are no apparent cheers or voices in the poem as they depart, they are leaving silently, secretly and this leaves the reader feeling that it is a funeral convoy passing by and that the troops are experiencing foreboding of doom and may well be resigned to their fate on the frontlines.

“They sang their way dimly gay”

further shows that the troops are resigned to their fate and are singing their way to almost certain death..

interestingly, there is a large amount of secretiveness throughout this poem. It is first apparent in stanza three –

This line makes the reader question why the troops are departing so secretly, then in line thirteen the phrase –

“We never heard to which front these were sent.”

Shows that the troops and general public were not aware of where the troops would go to fight, or what the true nature of the realities would be when they got to their destination and that the public were not made aware of these realities and truths, in fact it was concealed from them. The secretiveness is also mentioned in stanza two, lines nine and ten –

“Then unmoved, signals nodded, and a lamp

Winked to the guard.”

Here the theme of secretiveness is displayed through the imagery of the signals nodded and a lamp winked, the reader feels conspiratorial messages conveyed through Morse code.

In the last stanza the secretiveness theme appears again, but this time, it is linked with the return of the soldiers. This stanza implies that only a few of these soldiers are likely to survive the war and return to their homes. However, they will ‘creep back’ implies that the soldiers may not wish to return as heroes and may need to heal themselves both mentally and physically.

In conclusion “The Send Off” by Wilfred Owen starts off as a poem about a sending off ceremony towards the end of the war but in fact goes on much deeper to discuss the differences between what people at home perceive the war to be and the actual realities that the soldiers face at the frontlines. The last stanza hints at healing, and suggests that those few soldiers who do return may wish to do so silently, and not as heroes, and may not wish to discuss the realities and horrors that they have experienced. Thus, the title is rather ambiguous.

A Critical Analysis Of "The Send Off" By Wilfred Owen. (2016, Jun 27). Retrieved from https://studymoose.com/a-critical-analysis-of-the-send-off-by-wilfred-owen-essay 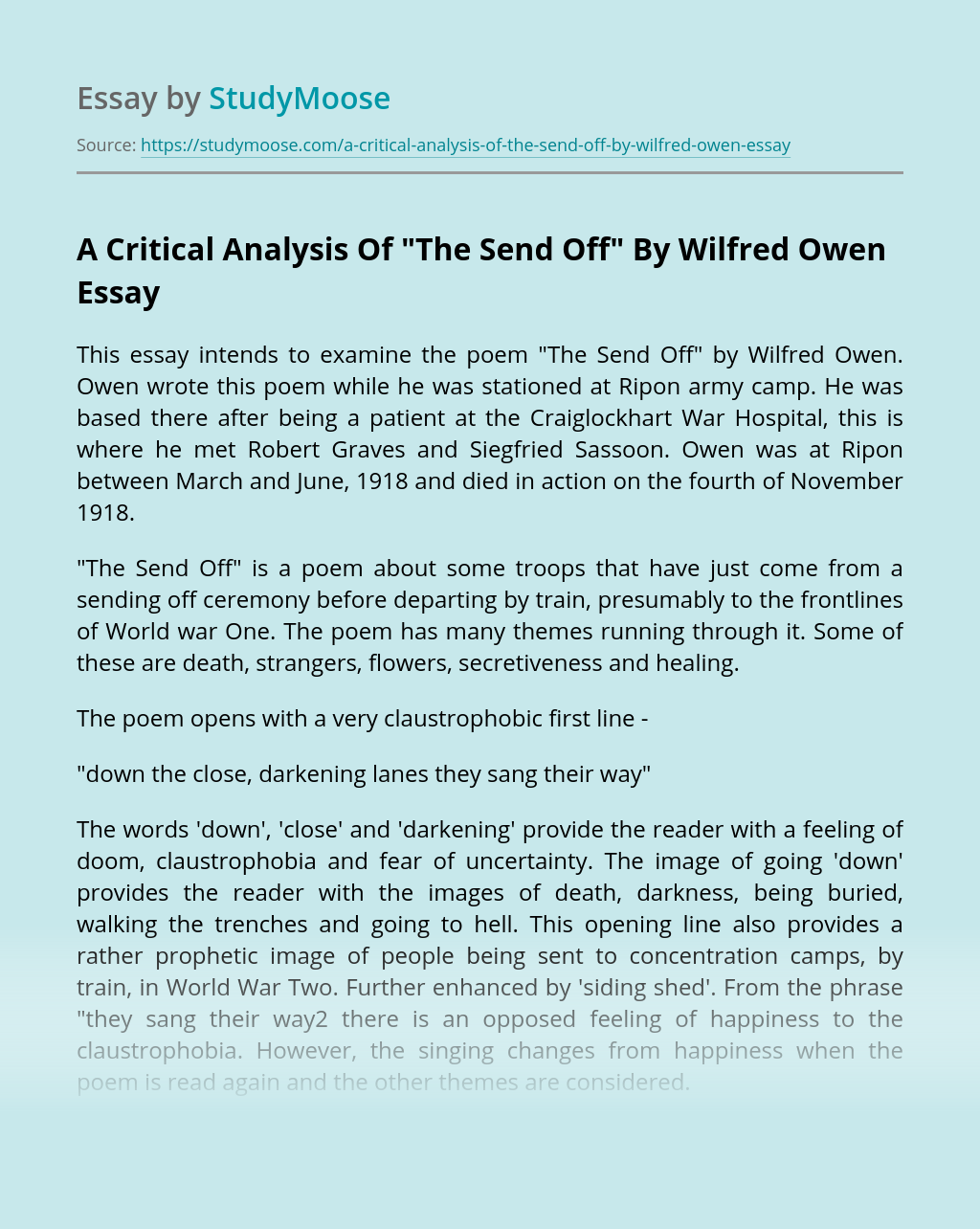