Psychology of Guido Orifice in "Life Is Beautiful"

Guido Orefice, the main character from ‘La Vita E Bella,’ is a very optimistic person. He works for his uncle in a hotel in Italy. He keeps bumping into a lady, whom he considers to be his princess, Principessa Dora. Guido does many things and takes many risks just to see Dora. So they fall in love with each other and get married. They have a boy name Joshua. Their life is very great until the Nazis come and take them all away to a concentration camp.

Turn in your highest-quality paper
Get a qualified writer to help you with
“ Psychology of Guido Orifice in “Life Is Beautiful” ”
Get high-quality paper
NEW! AI matching with writer

On that very same day it is Joshua’s 7th birthday. Guido says that he has planned a birthday surprise and that they are going to a fun place to play fun games. Guido tells his son that he needs to be quiet and do what the guards say while the adults go and play games. He also said that every game they win and for every time they do something correctly they get a certain number of points.

The first person to win 1,000 points gets a real tank. Joshua really wants it so he does what he is told to.

So while Joshua is hiding all the other kids are being gassed and killed. Also Guido is working very hard so he does not get killed and can make his son happy. He gives up his food and other basic needs to have his son think they are playing a game. By the end of the war, Guido says they have 940 points; the Nazis are mercilessly killing the Jews.

Guido tell Joshua to hide in a little box, and not to come out until he comes back or until it is totally quiet, and that this will get him to 1,000 points and he will him the game. Guido then dresses up as a girl and goes looking for his wife. A Nazi comes and takes him into an alley and shoots him. Soon the gunshots die down and everyone leaves. Then Joshua comes out of his box and looks around. He sees a large tank coming towards him and is excited because he won the game and got his tank.

In the end, Joshua is a grown man and you hear him say, “This is my story. This was the sacrifice my father made. This was his gift to me.”

Erik Erikson identified eight psychosocial stages during which an individual’s primary goal is to satisfy desires associated with inborn social needs. He hypothesized that from infancy through adulthood, we proceeds through these stages, each of which is related to a different problem that needs to be resolved. If the potential problem is dealt with successfully it will result in a positive personality trait. If not dealt with properly he or she may become anxious, worried, or troubled and develop social and personality problems. Guido has gone through every stage with a successful result. He has trust, autonomy, initiative, industry, identity and intimacy. Generativity versus stagnation is the Stage 7 problem. So far, Guido is leaning towards generativity, but it could change. If Guido had remained alive till Stage 8, he would have integrity instead of despair.

Sigmund Freud hypothesized five psychosexual stages during which a child’s primary goal is to satisfy desires associated with innate biological needs. Freud believed that the interactions between parent and child greatly influenced the child’s social development and future social interactions. Guido is currently in the genital stage, the last stage that lasts from puberty through adulthood. It is the time when an individual has renewed sexual desires that he or she seeks to fulfill through relationships. Guido must have had a problem during the oral stage so therefore he had an oral fixation. Guido loves to talk and make people laugh, that is how we figure that out.

Lawrence Kohlberg developed a theory to explain moral development. His theory had some similar features to the other analysts. He classified moral reasoning into 3 levels, pre-conventional, conventional, and post-conventional. The three levels are each divided into two stages. Also, he suggested that everyone progresses through the levels in order, from lowest to highest. Not many people make it to the higher stages of moral development. Guido is considered to be in Stage 3 because his wife and his son guide his moral decisions. Guido can understand the actions and talk of Stage 4 where moral reasoning is determined most by confirming laws of society.

Abraham Maslow was interested in human motivations, especially in how humans go about choosing which biological or social needs to satisfy. He proposed the hierarchy of needs. It is an ascending order with biological needs at the bottom and social needs at top. This shows that we first satisfy our biological needs before social ones. Before the Nazis came and took Guido and his family away, Guido was on the highest level, the level of Self-Actualization. It involves developing and reaching our full potential as a unique human being. When he was in the concentration camp, his whole hierarchy of needs started all over again and he was back at level one. When he was shot he was still at level one because he had no protection and harm.

Carl Rogers had a personality theory that was often called the self-theory because of his emphasis on the ‘self.’ Our society also leads us astray with conditions of worth. As we grow up, our parents, teachers, peers, the media, and others, only give us what we need when we show we are “worthy,” rather than just because we need it. We get a drink when we finish our class, we get something sweet when we finish our vegetables, and most importantly, we get love and affection if and only if we behave. These actions of only getting positive regard on condition are called conditional positive regard. Because we do indeed need positive regard, these conditions are very powerful, and we bend ourselves into a shape determined by a society that may or may not truly have our best interests at heart. A good little boy or girl may not be a healthy or happy boy or girl.

Over time, this “conditioning” leads us to have conditional positive self-regard as well. We begin to like ourselves only if we meet up with the standards others have applied to us, rather than if we are truly actualizing our potentials. And since these standards were created without keeping each individual in mind, more often than not we find ourselves unable to meet them, and therefore unable to maintain any sense of self-esteem. Guido had unconditional positive regard and unconditional positive self-regard. This is the opposite of what is above. Guido was loved no matter what happened and he loved himself because of that. He did not keep and high goals and was always happy and had a high self-esteem.

The last, and probably the most detailed analysis of Guido’s personality would be Myers-Briggs. According to the Myers-Briggs test, Guido is an ENFP. This stands for Extrovert, Intuitive, Feeling, and Perceiving. ENFPs want to both help and be liked and admired by other people, on an individual and a humanitarian level. They have a large amount of passionate charm. They are outgoing, fun, and genuinely like people. They are warm, affectionate, and disconcertingly spontaneous. However, their attention span can be short. ENFPs are easily intrigued and distracted by new friends and acquaintances, forgetting about the older ones. ENFPs are pleasant, easygoing, and usually fun to work with. They come up with great ideas, and are a major asset in brainstorming sessions. Follow-through tends to be a problem because they get bored quickly, especially if a newer, more interesting project comes along. They also tend to be procrastinators, both about meeting hard deadlines and about performing any small, uninteresting tasks that they’ve been assigned. Guido meets almost all of the traits of an ENFP.

Psychology of Guido Orifice in "Life Is Beautiful". (2016, Jul 03). Retrieved from https://studymoose.com/psychology-of-guido-orifice-in-life-is-beautiful-essay 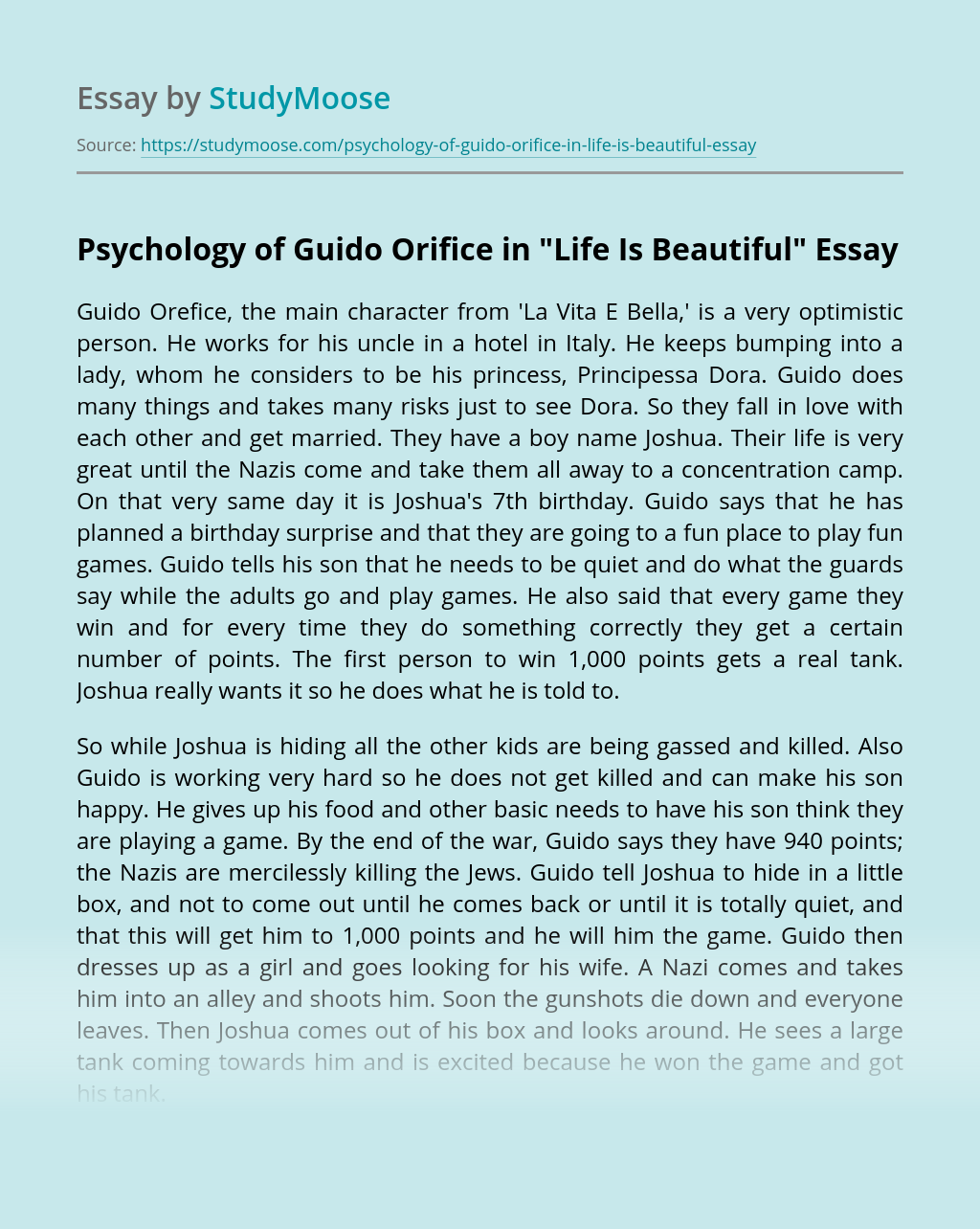 Turn in your highest-quality paper
Get a qualified writer to help you with
“ Psychology of Guido Orifice in “Life Is Beautiful” ”
Get high-quality paper
Helping students since 2015
Stay Safe, Stay Original