When asked to find something in the media that directly relates to subject matter that had been discussed in our psychology class there were a couple of topics that came to mind. However, one stands out to me in particular, and that is a movie that I have seen recently called John Q. In this film Denzel Washington plays the role of John Q. Archibald, a man who will go to any lengths to keep his one and only son, Michael, from dying.

Don't use plagiarized sources. Get your custom essay on
“ Psycholgy exhibited in the film John Q ”
Get custom paper
NEW! smart matching with writer

During the movie, John and his wife, Denise, learn that Michael has an enlarged heart and needs an emergency transplant operation. On top of that, John has recently been reduced from full-time to part-time work. He can’t afford the operation and his health insurance won’t cover it, so he vows to do whatever it will take to keep his son alive. This obviously becomes an extremely difficult moral decision that Archibald must make.

In the psychology textbook, there is very similar example to what occurred in the movie John Q, this example was used by a psychologist by the name of Kohlberg to conduct a moral reasoning experiment.

The situation in the text tells of a woman that is near death with a special type of cancer, and there is only one, recently developed drug that could possibly save her. However, the druggist was apparently charging 10 times what it cost to make the drug, which is 2000 dollars. The woman’s husband tried to get all the money he could however came up short, and the druggist refused to cut him a deal, and therefore, leaving the man two choices, to either let his wife die, or steal the medicine.

And like any good husband the man broke into the store and stole the drug for his wife.

This above situation when described in class made me immediately think of the movie John Q, and is the reason this paper is being written. In the film however, the victim was a child who has barely experienced life yet, and measures for his survival were much more desperate. Instead of a just a simple pill or treatment this boy needed a new heart, and a matching heart with that, and without the proper insurance the transplant was near impossible. So, John took the matter into his own hands. He felt that his only option is to take the emergency room hostage until the doctors agree to give his son the operation that he desperately needs and find him a compatible heart. After locking himself, his son and a handful of doctors into an operating room, the operation gets underway; however, a compatible heart still is yet to be found. Much of the time in this film is spent on the search for a compatible heart, and also John’s communication with the media and police outside the hospital like it is some sort of negotiation, when in reality what he wants is just a good life for his son.

Nearing the end of the movie, a heart still cannot be found. So John is on the verge of killing himself so that his son can live. So he puts a single bullet into his gun and puts the gun slowly toward his head. At this point in the movie, it is revealed that the whole time John was holding up the hospital with an unloaded pistol. However, just in the nick of time, a donor is found and John’s wife runs hysterically toward the hospital to assure that both her husband and son make it out of that building alive. Eventually the heart reaches the hospital and the young boy survives. John is sentenced to something like 2 to 3 years in prison for holding the emergency room hostage.

The movie John Q presents to the viewer in a very clear fashion what is known as an ethical vignette, which was introduced in the 80s by Kohlberg. As our class talked about rather extensively and the textbook touches on Kohlberg, was a famous psychologist in the early 80’s. His studies were primarily focused on moral reasoning, or the thinking that occurs as we consider right and wrong. Kohlberg also presents the idea of vignettes, or a perplexing moral situation where something morally wrong must be done in order to do what a particular individual sees as right or mandatory.

In conclusion, I believe in John Q, what John did was totally in his and his families’ best interest, and is a perfect example of an ethical vignette. I also believe that John thought on a very postconventional scale. He knew what he was doing was morally wrong and against his ideals, however, since the insurance companies are such bloodsuckers, he was left with no choice. However, he was looking out for the best interests of his family and himself and simply refused to let his son die. I think very few people are throw into a situation as drastic as this as quickly as John Q was in the movie, however, it just goes to show that there is no price for a human life and that hospitals simply shouldn’t deny care to those that aren’t rich. I feel that what John did in this movie was perfectly acceptable, and it played out very well in Hollywood however, in reality I think he would have been unable to single-handedly take a hold a whole emergency room hostage. But, it still remains a very clear example of an ethical vignette. And is a perfect portal of the saying “desperate times call for desperate measures.” 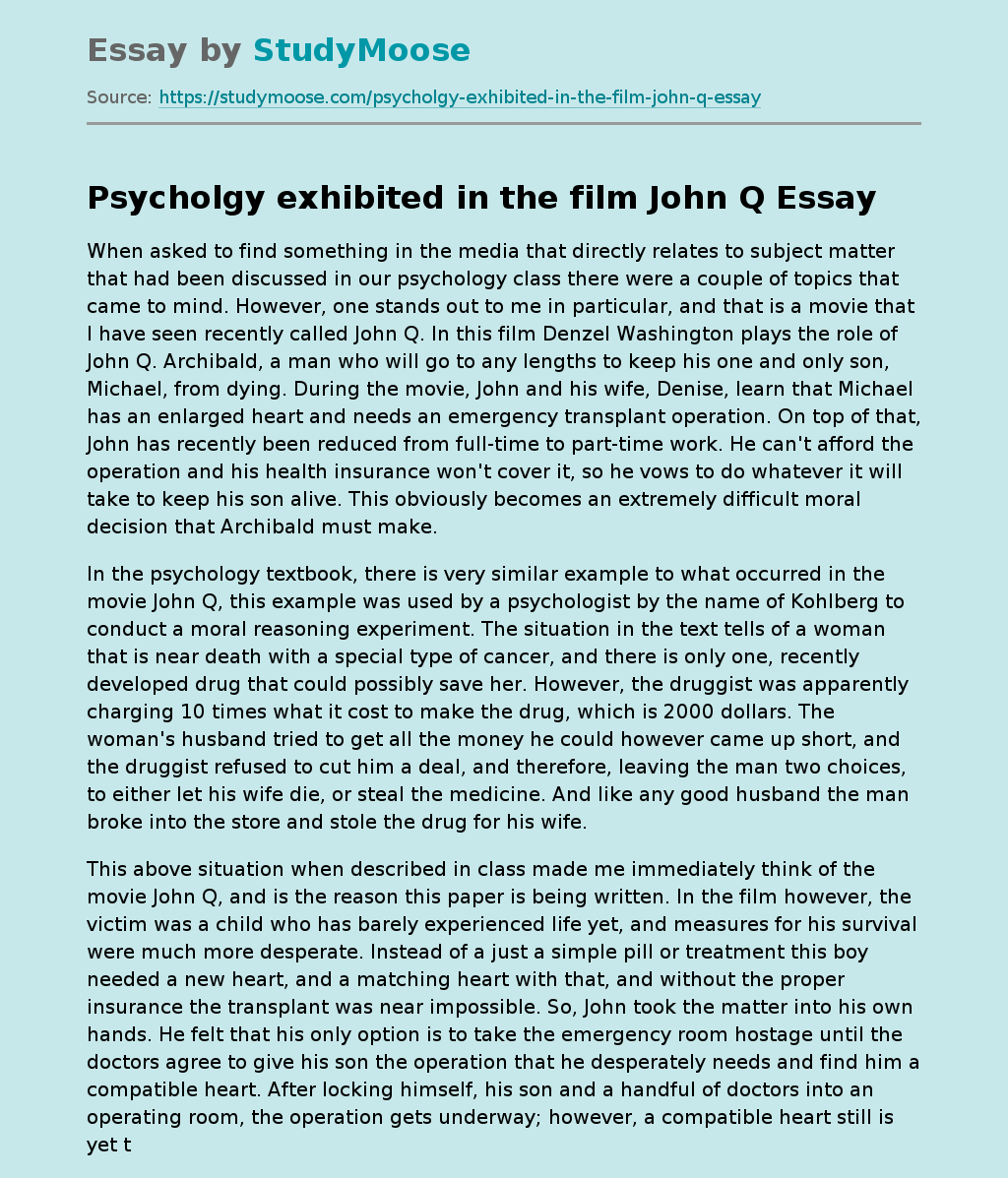