Nowadays, people begin to understand that the knowledge of human psychology plays a great role in the everyday life. It means that basic understanding of different psychological concepts gives a key to the apprehension of the inner world of every person. Today, there are many theories that help to determine the personality of every client and find solutions for every problem.

One of such theories is the psychoanalysis. It lies in the researches of the human minds and the principles of its working.

Turn in your highest-quality paper
Get a qualified writer to help you with
“ Psychoanalytic, Neoanalytic, Jungian, and Individual Psychology Theory ”
Get high-quality paper
NEW! AI matching with writer

Main theorists, S. Freud and J. Breuer, emphasized the role of the childhood memories in explaining of different fears and psychological problems of the clients. In fact, S. Freud singled out three components of a human mind. They are id, ego, and superego. The Id is that part of the personality, on which the instinctual drives and needs have a great impact. This aspect is very unstable and dynamic. In other words, it is unmanageable as it is ready to satisfy all demands and avoid pain and problems in any way.

Therefore, there is the other element called ego. It deals with the realistic purposes and tries to slow down the impulsiveness of the id. Ego balances between the instinctive drives and realistic principles trying to achieve as many benefits as possible. However, there is a third element superego. It deals with the morality principles. In fact, superego makes instinctive needs and drives reflect in the socially accepted ways. Morality principles and social laws limit the individual’s desires to satisfy basic needs (Masling, 1990).

The other basic key term of this theory is the concept of unconscious. Individuals are not aware of the existence of this aspect of personality. However, it rules human’s emotions, feelings, thoughts, and deeds. The exploration of the unconscious gives reasons of different psychological problems of the clients. From this point of view, psychoanalysts based their therapy. Therapists usually use such methods of researches as free association, dream analysis, and even hypnosis. These ways help to reveal the reason for any psychological disorders. The role of the patients remains rather passive. Their task is to recollect different memories and dreams from their childhood, which had a great impact on them.

Among the advantages of the psychoanalytical theory, one can name its possibility to uncover psychological problems with the help of the childhood memories and events. Moreover, it explained the role of the unconscious in the personality structure. In addition, this theory helped to reveal the defense mechanisms, which explain why individuals behave differently in the similar situations. However, the theory pays no attention to the role of the surroundings, culture, and the social background of the clients. It is also more concerned about the treatment of pathologies rather than minor deviations.

Psychoanalytical theory had a great impact on the further development of psychology. As a result, there emerged a neo-analytic theory. Generally, it follows the studying of S. Freud. However, there are some huge differences. Neo-analytic theorists, A. Freud, A. Adler, and K. Horney agreed on the importance of the unconscious and the role of the instinctive drives and needs. However, they do not emphasize so much on the sexual and aggressive instincts as Freud did. Moreover, neo-analysts believed that not only childhood events influence the psycho-state of an individual. They consider personality development never to end and continue throughout the whole life. In addition, they paid attention to the role of the environment and social conditions in the life of the individuals. Such a position helped them to look at the psychological problem of clients from different points of view and analyze various reasons.

Therapists focus their attention on the use of association method and the exploration of dreams and recollections. They are concerned about the treatment of both simple deviations and difficult psycho-disorders. Clients have to be attentive and take an active part in the process of treatment. Speaking about the negative sides of the neo-analytic theory, it had little empirical data and overestimated the role of the ego in the personality structure.

Later, Carl Jung has formed his own psychological school. In this case, one calls it a Jungian theory. In general, the studies of Jung have a strong connection with the main concepts of the psychoanalytical theory. In his turn, Jung introduced the concept of the collective unconscious, which contains different archetypes. Under the definition of the archetype, he understood the inherited principles, which determine human perception of the world in a certain way. The collective unconscious includes different memories and ideas that are a part of the biological heritage. The therapy of C. Jung based its attention on the discussion of dreams and fantasies. During the therapy work, the client plays an active role. As a result, both therapist, and a client combine his or her efforts in order to achieve a desirable result. Such a position is very fruitful as clients understand the importance and can change the course of the events on their own (Wilde, 2011).

Alfred Adler suggested his individual theory. It was much different from the S. Freud’s concepts. Adler did not emphasize the role of sexual and aggressive instincts. Instead, he overestimates the social background and the concept of interiority. He supposed that each person is born with the sense of interiority (Adler, 2011). Therefore, the main task and drive in the life of every individual is to achieve superiority. A person derives from the social principles and the surroundings and forms the character according to it. Speaking about the clients, Adler focused attention on the problem of hated children, different deviations, and deformities at birth and others. However, the drawback in his theory is that superiority receiving does not always mean mental health.

To sum up, the psychoanalytical theories and its followers explored the nature of human personality. They tried to solve the psycho-disorders by revealing the structure of the unconscious. Theorists emphasized the role of the natural instincts and drives and tried to solve psycho-deviations with the help of recollection of the past events and memories.

Adler, A. (2011). _The practice and theory of individual psychology._ Eastford: Martino Publishing. 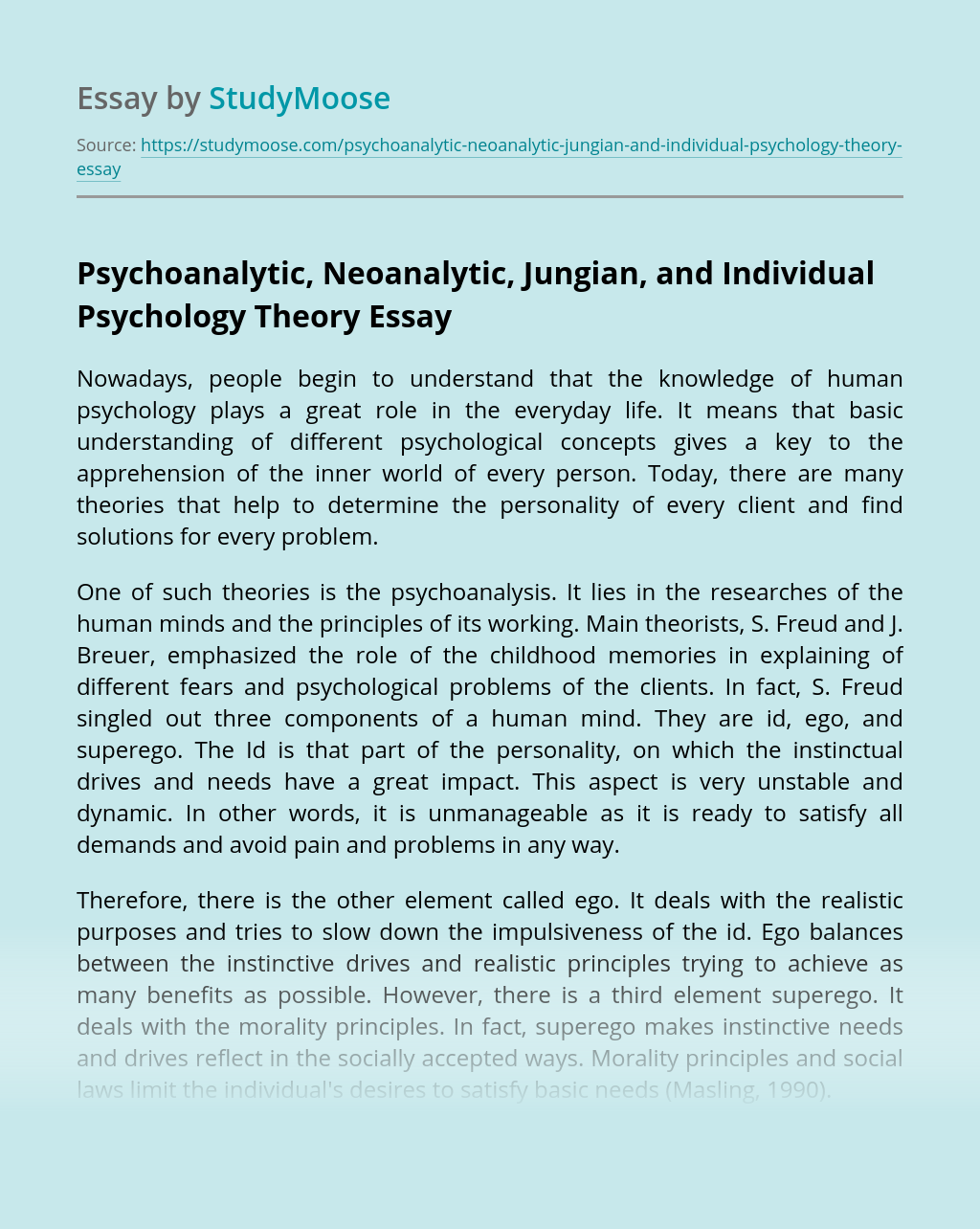 Turn in your highest-quality paper
Get a qualified writer to help you with
“ Psychoanalytic, Neoanalytic, Jungian, and Individual Psychology Theory ”
Get high-quality paper
Helping students since 2015
Stay Safe, Stay Original