Pros and cons of English being the international lingua franca

English speakers in the world including those who are in the inner circle, outer circle and expanding circle had reached to 380 millions of people since 2001. The finding shows how influential English Language is. Gradually, English become the international lingua franca, “utilized outside of the country or countries of its origin.”( Subject Area – English Language Essays) The Lingua Franca There are both pros and cons of English becoming the international lingua franca.

English is the best candidate language for lingua franca. Many countries take English as the second language, students learn English under the education system mandatorily.

Don't use plagiarized sources. Get your custom essay on
“ Pros and cons of English being the international lingua franca ”
Get custom paper
NEW! smart matching with writer

In this way, the percentage of the population had the standard level of understanding of English, which is a non-native language, is unprecedentedly large. Also, there are so many English Language media immersing in the world, for example movies, pop music, the American TV programmes and the internet etc. The high level of invasion of the Anglophone societies’ culture creates a platform for learners to enhance their English abilities, just by sitting in front of the computer.

Learning English is as easy as this without having to go to an English speaking country. Under the fact that English is widespread in comparison to the most other languages, there is no doubt that English is the most suitable to be the international lingua franca.

In addition, overcoming the language barriers is the potential benefit of English. Communications are difficult when people don’t have a common language. With English being the lingua franca, it is easier for people to disseminate ideas and also break down cultural boundaries that separate people apart at the same.

Van Parijs who is a Professor at the Faculty of economic, social and political sciences of the University of Louvain, gives the example of the use of English by Belgians when discussing the separation of that country with the Dutch-speaking Flemish and the French-speaking Walloons. They choose to hold the conversation in English as they would like to show mutual respect to both the Flemish and Walloons, by not privileging some Belgians over one another.

“With English as the lingua franca, instead of having to choose a language that some of the participants in the conversation understand but not others, one can choose a language that leaves no one completely left out.” (Benjamin Studebaker), I totally agree with this statement. People can communicate only when they have a common language, with English a language the widespread and popular in the world, English propose a potential benefits to the world as a lingua franca.

Despite the fact that English is beneficial for communication, there are drawbacks of English being the lingua franca. For institutionalized teaching of English in non-ENL countries, there are problems found. First, English grammar, vocabularies, pronunciation so on, serves as obstacles for students to learn completely standard English. “English grammar and verb conjugation is extremely irregular, requiring a considerable amount of rote memorization, instead of the application of logical and consistent rules” (Subject Area – English Language Essays The Lingua Franca) The above saying shows the difficult part of learning English, and it is true that we cannot create sentence in our own logic instead we do that in memorizing sentence patterns. Also, we won’t know all of the slangs that the American and the British use meanwhile we cannot avoid they speak those unknown slangs to us.

The second drawback of English being the international lingua franca is that the dominance of the English language proposes a threat to our own language. Taking Hong Kong as an example, English is set to be the second language here, abilities of English usually come first than Chinese. Therefore, parents always place English a high place. When children’s result in English language is poor, they spend so much money on remedial classes. But if in the other way round, may be some parents won’t care. Gradually, students themselves cultivate that value that English language is much more important, and that Chinese language is being undervalued as a result.

Pros and cons of English being the international lingua franca. (2016, Mar 04). Retrieved from https://studymoose.com/pros-and-cons-of-english-being-the-international-lingua-franca-essay 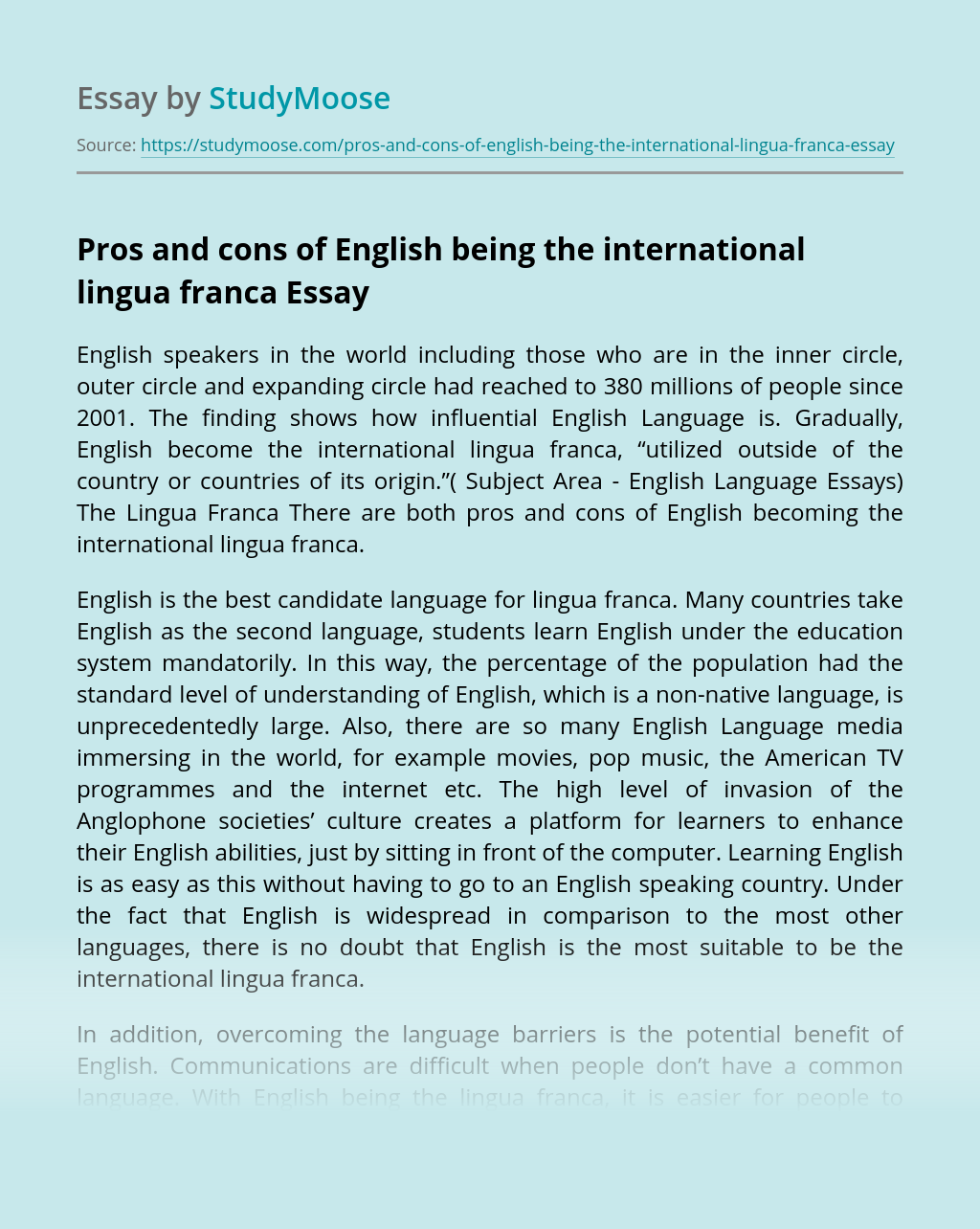