Apollo 13 liftoff mission came on 11th April, 1970. There was a small setback during the launch: the center engine in the second stage had to be shut down early because of a failure known as “pogo oscillation.” Instinctive cut-offs stopped the problem before it could tear the ship apart. About 56 hours after takeoff, with Apollo 13 much closer to the Moon than to the Earth, Mission Control radioed Jack Swigert and asked him to turn on the stirring fans for the hydrogen and oxygen tanks.

About a minute and a half later, there was a loud bang. The crew’s first thought was that the lunar module had been struck by a meteoroid. What had happened was actually much worse. Number 2 oxygen tank had exploded. Later analysis would reveal damaged insulation on the wires to the stirring fan, allowing a short circuit. A large aluminum skin panel on the outside of the ship blew off, damaging an antenna and quickly interfering communication with Mission Control.

The shock of the explosion caused a break in the number 1 oxygen tank as well. Over the next two hours, the entire oxygen supply of the service module was lost. Complicating matters even more, the fuel cells needed oxygen and hydrogen to generate electricity. The command module was left with backup battery power only.

Landing on the Moon was no longer an option. The crew rapidly shut down the command module to save its limited power and moved into the lunar module. The new project was how to get the crew back safely to Earth.

Crises normally have extreme limitations in time and resources. If problems could not be solved in very short order, the consequences would take hold at once with fatal results. While NASA had a wide supply of spare parts, machine shops, and trained engineers who could have fixed the ship easily, those resources were on Earth, and the problem was more than a hundred thousand miles away. Emptying and shutting down the command module was the first order of business, but there were many problems yet to be overcome before the crew of Apollo 13 would once again see home. There were plans for terminating an Apollo mission, but some of them were ruled out by the demands of the situation. The quickest way home required abandoning the lunar module, but that was serving as the lifeboat for the crew. The service module honesty was in doubt, so they didn’t want to fire its engine except as a last resort. That left a circumlunar option, using the Moon’s gravity as a slingshot to send the crippled ship back toward earth. To do that, they needed to make a minor course correction, but debris from the explosion made it impossible to use the onboard sextant device, requiring Jim Lovell to fly the spacecraft using the sun in the cockpit window as an alignment star. The problems mounted. While there was plenty of oxygen in the lunar module, carbon dioxide removal required the use of lithium hydroxide canisters. While there were enough of them available, the square command module canisters wouldn’t fit in the round LM openings. An engineering team created a kludged-together system using plastic bags, cardboard, and tape, working on an extremely limited time span.

Power supplies were limited. The LM was rated for two people for a day and a half, and now it would need to accommodate three people for four days. All nonessential power was shut down. Water and food were limited. The crew became dehydrated. Lovell lost 14 pounds. The team managed to overcome one problem after another, but the toughest technical challenge came at the end of the mission. There had never been a case where the command module had to be powered up after a long sleep, and the flight controllers had to test and write new procedures to accomplish it. (In the movie, that’s the suspenseful scene in which Ken Mattingly, played by Gary Sinise, tries to find a start-up sequence that draws less than 20 watts.) The normal time for a project like that was three months; the team had three days. By the time the Apollo 13 team reentered the command module, condensation had covered the interior with fine droplets of water. Water was inside the circuit panels as well, and the chance of a short circuit was all too real. Four hours before landing, the crew abandoned the service module, and one hour before landing they abandoned the LM that had served as their lifeboat. As they entered the atmosphere, the heat of reentry created rain inside the command module. On April 17, 1970, Apollo 13 marked down safely near American Samoa.

Crisis Management and the Impossible ProjectWhat differentiates a crisis from other kinds of projects is the way it tightens the limitations. Time pressure is normally high, and the nature of the situation normally limits resources that would otherwise be available to the team. These revised limitations normally established by the situation, not by the will or desire of the project team. In the case of Apollo 13, a procedure that would normally take three months had to be developed in three days, for the simple reason that three days was all they had. Modifying the carbon dioxide removal system would have been insignificant on Earth; it was a nail-biting project in space, with only the resources available on the ship able to be used for the job. If the mission control team was not well prepared and Gene Kranz not insisted on “tough and competent” and simulations by the hundreds not taken place, it’s almost certain that the Apollo 13 mission would have ended in failure. But that’s the point. To prepare for crisis, prepare early. By the time the crisis occurs, it’s usually too late. 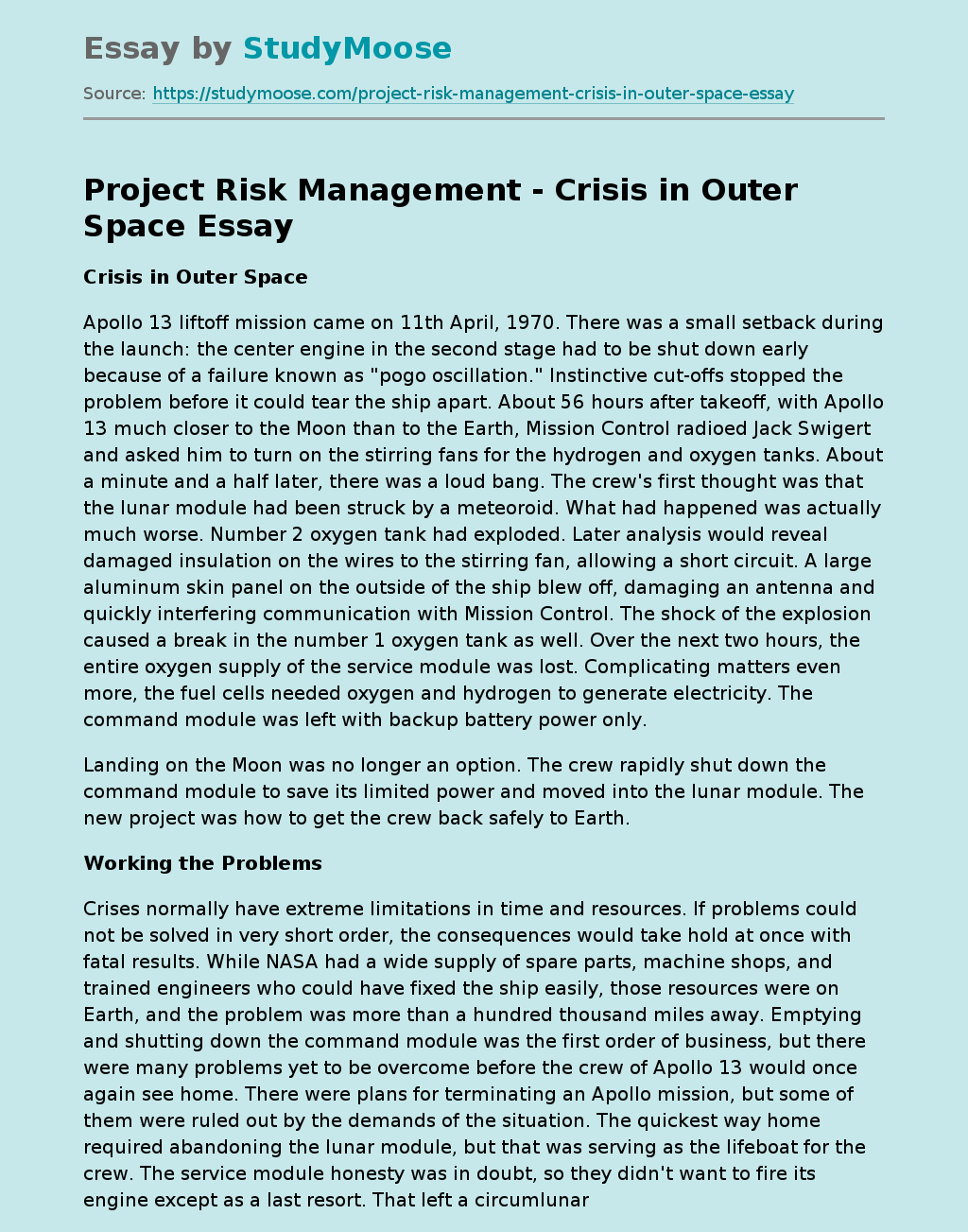