The Coca-Cola versus Pepsi competition is perhaps the most well known rivalry in the history of marketing. Coke has long enjoyed the home field advantage, having become entrenched as the most popular and identifiable cola throughout the world. Although it has carved itself a substantial portion of the market, Pepsi has struggled to match the sales revenue of Coca-Cola; until recently. Although Pepsi has never come close to equaling Coke cola market share, they have become more aggressive and adept than Coke in cornering the non-carbonated beverage market.

It is in this market that Pepsi is seeking to obtain a sustainable competitive advantage over Coke.

It their quest to acquire and develop new products, will the use of the PTSTP method help Pepsi develop new products in order to obtain a sustainable competitive advantage?A product is defined in three levels; core, actual, and augmented. The core of the product is the benefit it offers the consumer. For the example of colas, it could be refreshment, energy (sugar and caffeine), alertness, or just pleasure.

The soda itself is the actual product. The augmented product for a cola could be the recognition and status gains perceived by drinking that particular brand. Or it could even be the weight loss from sticking to diet colas.

For the development of new products, we first need to identify what consists of a new product.

There are six categories of new products:1.New-To-The-World. This is a product that has no like product offered elsewhere. For example, when the first personal computer was offered to the public, this would be a new product.

2.New Product Lines. This is when similar products exist, possibly even under the same brand, but a new line of the product offers some tangible difference to those products already offered. For example, offering diet colas in addition to regular colas under the same brand.

3.Product Line Additions. This is the addition of a product that is directly related to one offered. For example, offering Vanilla Coke for sale alongside Coke.

4.Improvements/Revisions. This is a product which has already been offered, but some change or revision has been made to the products properties. For example: New Coke, or anything labeled “new and improved.”5.Repositioned Products. The same product offered in a new market or directed towards a new target market. For example Pepsi bringing Sabritas chips into the US to target the Hispanic market.

6.Lower-Priced Products. This is simply reducing the price of an existing product to stimulate sales.

PTSTP is a mnemonic for the five step process underlying Target Marketing and Positioning. The five steps are as follows:1.Identify competitive Products.

3.Determine the basis for Segmentation.

4.Determine if any Target markets are underserved.

5.Develop a Product for the underserved market.

By using this method, a company can identify a gap in a particular market segment. This gap may be present because there is no product to fill it, or because the current product is reaching the end of its life-cycle, thus creating an opportunity for new growth. To answer the previous question, we will contrast the PTSTP method to Coca-Cola and Pespi’s development of the non-carbonated beverage market.

Pepsi has continually struggled to match Coke’s market share in colas and other carbonated beverages. Coke enjoys a 44% slice of the market compared to Pepsi’s 32%. During their 108 year rivalry, Pepsi has never come close to selling as much soda as Coke. Much of this is due to Coke’s brand recognition. Although in 2006 Pepsi, for the first time, beat Coke in beverages sold. This was due to Pepsi’s embracement of the non-carbonated beverage market, where it led the market with a 24% share over Coke’s 16%. Pepsi was able to recognize and take advantage of the growing non-carbonized market much earlier than Coca-Cola.

Although cola sales have recently stagnated to less than 1% growth, non-carbonated beverages grew 8% in 2004. Much of the failure of Coke to expand into this market can be traced back to the stubbornness of Coke executives to expand beyond the soda market. Coke had an opportunity to acquire Quaker Oats in the 1990’s, but passed on the opportunity. Instead, Pepsi acquired Quaker Oats in 2001. Among Quaker Oats assets were Gatorade and Snapple, both leaders in their markets. Although these product lines were already established, they represented new products to Pepsi, as they represented Pepsi’s introduction into the non-carbonated beverage market. As a result, Pepsi owns a commanding lead in the sports drink market, with Gatorade holding an 80% share to Coke’s Powerade at 15%.

Until 2001, Coca-Cola had been reluctant to embrace new products. They were not willing to extend their company and take the chance in the non-carbonated market, until they saw the success Pepsi was having. In addition to passing up on Quaker Oats, Coke lost a bidding war for the Sobe line of enhanced juices, and their bid for the Planet Java line of coffees and teas was not embraced by their independent bottlers. However, since 2000 Coke has been actively seeking new products in this market, including the acquisition of the successful Minute Maid juice line.

The difference in philosophy has made the difference for Pepsi. In fact, losing the cola wars may have been the best thing for Pepsi. This forced Pepsi to look outside the soda realm in order to increase profits. As Pepsi’s CEO, Steven Reinemund believes that his company’s growth is due to their constant quest for change, that “Innovation is what consumers are looking for, particularly in the small, routine things of their life.” Pepsi’s willingness to embrace new product lines has given them the edge over Coke for the first time in history. Their offerings of Quaker Oats’ beverages, Sobe, and Aquafina have all been firsts for a soda company. As a result, they have gained the brand recognition over Coke’s subsequent offerings, leading to an increased market share.

In order for Pepsi to maintain their competitive advantage over Coke, they need to follow the advice of Reinemund, by remaining innovative. PTSTP can help them sustain this advantage. By identifying potential markets, and developing products for these markets, they can continue to capture new market shares. The beverage market is saturated with options for the consumer, with new products appearing everyday. Many of these products are variations on existing products. For example, energy drinks have become very popular in the past few years. As a result the market has become flooded with options. It will become increasingly difficult to introduce new products in this category.

By using PTSTP, Pepsi can identify a new niche in this market, or a different market to exploit. Using the energy drinks as an example, the competitors range from Fuze, Red Bull, and many others. By defining the target market, they can identify that the same demographics both tend to buy sodas and energy drinks. Pepsi can then segment the market into young males (18-30). They then determine that the target market of combined soda energy drinks is underserved. They then develop a product to serve this market. Thus Pepsi Max is born.

By using PTSTP, Pepsi has created a new product in soda energy drinks, Pepsi Max. It is this type of creativity and innovation that is embraced by Reinemund, and will serve to keep Pepsi with a sustained competitive advantage over Coke. Only by using a method such as PTSTP, can underserved markets be identified and exploited.

Business Week. 17 May 20044. Brooker, Katrina. How Pepsi outgunned Coke: Losing the cola wars was the best thing that ever happened to Pepsi — while Coke was celebrating, PEP took over a much larger market. 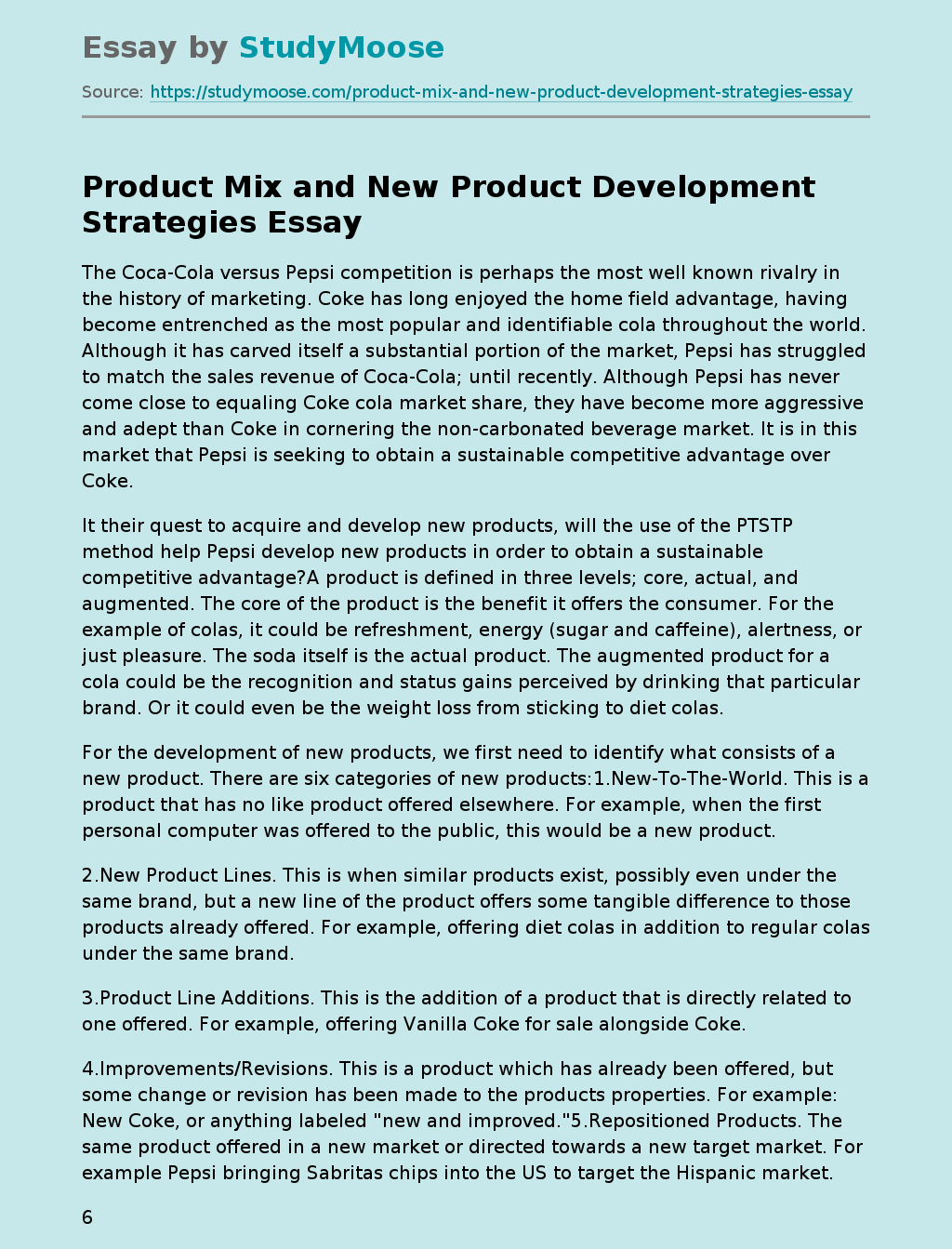