Problems that sikhs face practicing their religion in Britain today

Sikhism was born in the Punjab area of Asia which falls into present day states as India and Pakistan the main religions of that time were Hinduism and Islam.

Don't use plagiarized sources. Get your custom essay on
“ Problems that sikhs face practicing their religion in Britain today ”
Get custom paper
NEW! smart matching with writer

The Sikh faith began around 500 years ago (1500 CE) when Guru Nanak started preaching a faith that was quite distinct from Hinduism and Islam. Nine gurus followed Guru Nanak and developed faith over the next centuries. Sikhism is the youngest of the six world faiths and is the second smallest of all. Sikhism was formed from Hinduism and Islam. Sikhs follow the teachings of the 10 Gurus, The Gurus (meaning religious leader) are not worshipped. Their teachings are recorded in the Guru Granth Sahib, the Sikh holy book.

The 2001 census recorded 336,000 Sikhs living in Britain. Britain is becoming more and more multicultural and there are more Sikhs now than ever before. As Britain is predominantly Christian, many Sikhs face difficulties in practising their faith. Like some other religions, Sikhs are often discriminated against in Britain today.

The war on Iraq brings with it an increase in hostility towards those who wear turbans making it hard for some Sikhs to show pride in their religious clothing. The turban has become an important symbol of the Sikh faith. Most Sikh men wear a turban as well as some Sikh women. Sikhs may experience slurs, isolation, hostility and sometimes even assaults just because of their appearance. Many British people are racists and are unable to accept anybody who are of a different race, this must make it very hard for Sikhs to feel normal and at ease in the place that they live.

Some Sikh traditions include not cutting your hair and using tobacco. Sikhs don’t cut their hair because they believe God created you with hair so that is the way he must want you to look. In Britain some people may associate very long with being dirty and/or untidy, and this could also lead to more discrimination against the Sikhs. Male Sikhs wear turbans to cover their hair which can cause problems with certain types of jobs. Due to health and safety you have to wear a helmet/hard hat on a construction/building site. If you’re a Sikh, you are not allowed to take off your turban and the helmet won’t fit over the top of it therefore any strict Sikhs will not become builders or anything associated with construction/building sites.

In older times bus conductors were made to wear caps whilst working. Men with turbans were not able to wear this hat so they were not allowed to become bus conductors. Officers in the police force are also required to wear a cap/hat whilst working. Sikhs have been turned down due to refusing to take off their turbans so that they can work as a police officer. The UK Police have spent one hundred thousand pounds trying to adapt a hat that will fit over the Sikh turban. Until then Sikhs are not allowed to join the force unless they are willing to take off their turbans.

Schools in Britain teach very little on Sikhism today. The ‘network of Sikh orginisations’ expressed the views of the Sikh community that teaching of Sikhism is being pushed out even in schools where the majority of the population are Sikhs. Apart from a handful of schools there is little provision for pupils to undertake any qualifications in Sikh religious studies.

There are many sport professions that Sikhs are unable to take part in such as swimming and football. As a lot of Britain are sport fanatics this must be hard for Sikhs as they cannot take part in any of it. The law has been lifted against helmets for Sikh motorcyclists, so that they can now ride bikes with just a turban on.

Many Sikhs are vegetarians. This could be quite difficult in certain situations such as children in school or certain restaurants. Those who are not vegetarians will only eat meat where the animal has been killed in a certain way, unless the Sikhs know that the animal was killed correctly then they will not eat the meat. Eating in restaurants would be tricky because they’re unlikely to have killed their meat in the way Sikhs require.

Sikh men and women who are full members of their religion (Khalsa) wear the five K’s. These represent the five articles of faith which distinguish individuals as Sikhs. The five K’s described under Khalsa are KESH, KANGHA, KARA, KIRPAN and KACHERA. The Khalsa was a brotherhood of fighters who would dedicate themselves to the Sikh cause and were given certain distinctive features to identify them as Sikhs. There are five of these features, which Khalsa Sikhs wear today. They are:

under the turban to symbolise holiness.

wrist to protect the sword arm and symbolises

KACHA or KACHERA: shorts worn as an under

In Britain it is illegal to carry the kirpan identical to the original in public as it is seen as dangerous. However the ‘criminal justice act’ (1996) allows anyone to carry a blade exceeding the length of 3 inches for religious, cultural or work related reasons. The 2003 discrimination act safeguards the Sikhs to carry a kirpan. Some Sikhs wear a necklace that contains charms of the kanga and kirpan so that they do not look threatening.

There is a case of a girl from South Wales who was suspended from school for refusing to remove her Kara. The school claimed that her bracelet was against school rules which were set a long time ago. The girl refused to take off her kara as she was proud to wear it because it reflected which religion she was part of. The school was taken to court over the suspension and was declared guilty of indirect discrimination.

Sikh temples are known as Gurdwaras. There are not many Gurdwaras in Britain where Sikhs can go to worship. This is a difficulty for the Sikhs to practice their faith as in India part of a Sikhs ritual would include attending the Gurdwara.

Religious festivals such as maghi and diwali may not be attented by certain Sikhs due to work. Some jobs may not offer them the time off as Britain is more Christianity orientated with time off for Christmas and easter etc.

In Conclusion I think that being a Sikh in Britain must be difficult and hard to practice and will take some getting used to. Those who were born in Britain will not know any different anyway so they will be well adapted to the way in which they live. I think it is probably very hard for those who have emigrated from Asia to adapt to a new way of living. 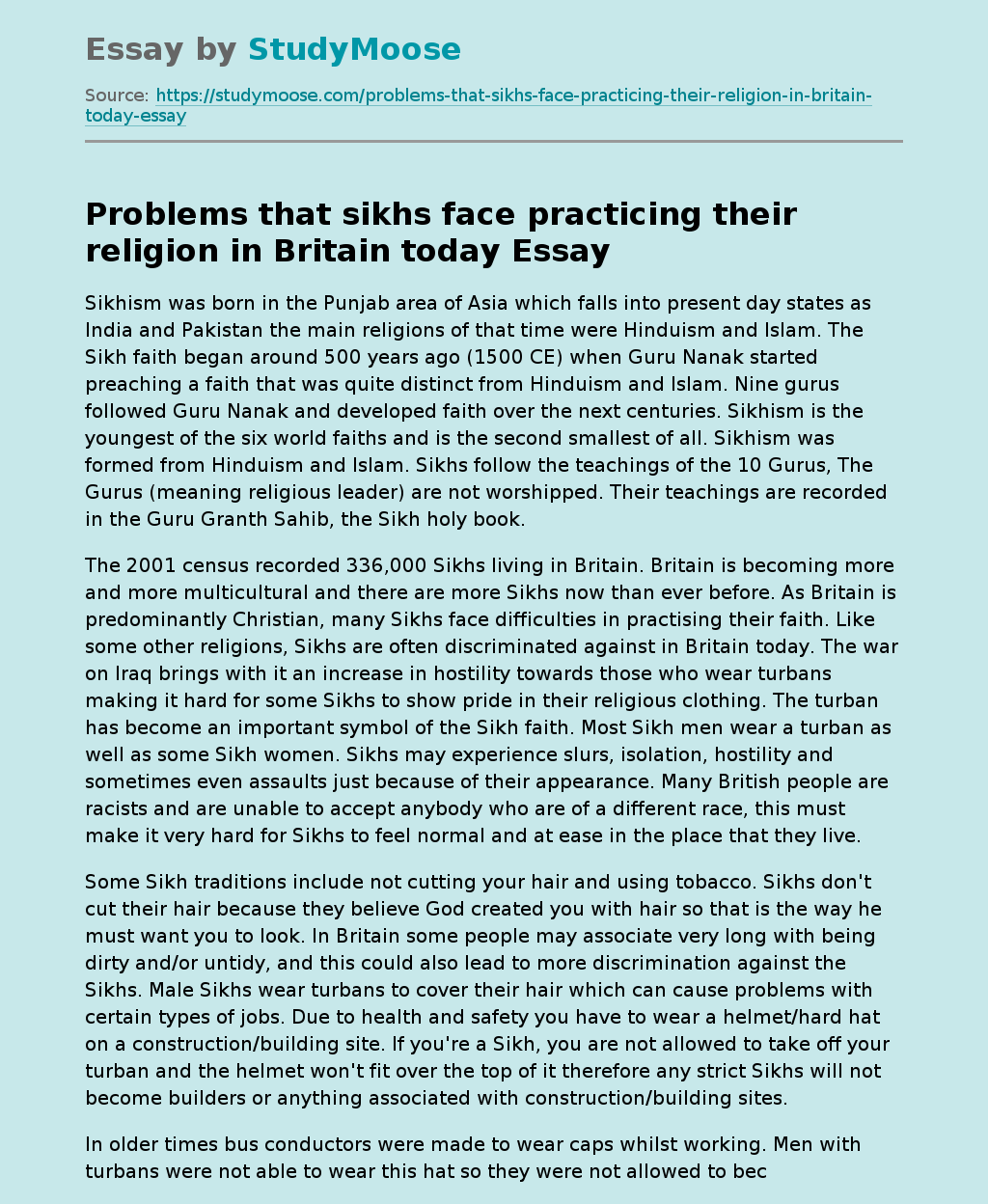