Problem of Slavery in A Troublesome Property

In the excerpt, “A Troublesome Property: Master-Slave Relations in Florida, 1821-1865, the author, Larry Rivers, focuses on the interaction between bondsmen and masters in Florida. It entails the theory that the master might claim the body of his property but could never quite dominate his or her soul. The state of Florida was one that differed in several aspects from other states in the old south which it made known as a free state. There were no slave laws and thus, it was considered a safe haven for many runaway slaves and the Seminole Indians.

Turn in your highest-quality paper
Get a qualified writer to help you with
“ Problem of Slavery in A Troublesome Property ”
Get high-quality paper
NEW! AI matching with writer

Due to the fact that there were no slave laws, the slaves often rebelled against their masters. As a result of such rebellions, there was a discipline problem that led many owners to perceive their slaves as “a troublesome property.” The three areas that the slaves had trouble with their owners were religious behavior, interpersonal relations, and work. With regards to religion, many slave owners, such as, Zephaniah Kingsley and Judge Wilkerson believed that religious expressions were a form of independence and would threaten slave control.

They believed that their slaves’ would become more empowered and have more bravery and be more difficult to handle and more disobedient.

However, other slave owners believed that it should be used as an instrument of control. When slaves were actually able to attend Christian services, it was by a white minister who taught them to obey their masters in order to be saved by God. However, if they disobeyed them, they would not be saved, but destined for damnation.

Another aspect, in which there was controversy, was with interpersonal relations. Slave owners believed that if the slaves were married and maintained a family that it would lead to good behavior and higher productivity. Yet, there were many slave owners who did not want their slaves marrying other slaves from different plantations. Nor did these slave owners want their slaves having other slaves visit them or vice versa. The only reason that those slave owners eventually complied is for the fact that the number of male slaves on certain properties began outnumbering the number of female slaves. Slaves were then only allowed to marry if they vowed to remain loyal to their masters and kept working efficiently.

The work patterns of the slaves were another aspect that caused controversy. The legal system that gave planters absolute power was said to not ensure effective control of the quality or quantity of work performed. Slaves often resisted and insufficient supervision intensified problems. As a result, Slave owners were forced to compromise with the slaves; allowing slaves to report to work after sunrise and to work under less-immediate supervision than other plantations had. Gang systems were also implemented to increase the efficiency and productivity of the workers. Nevertheless, many slaves were performing poorly, resulting in the decision of severe punishments and threats of being sold. When that failed they resorted to positive inducements which included; extra days off during the holidays, additional food allotments, additional free time, or money.

In my opinion, I believe the information provided was very insightful. Rivers gave an in depth understanding on the relationship between the slave masters and the slaves. It was very rewarding to know that not all slaves were submissive to their slave masters but rather many stood up for what they believe in. I commend all the slaves that were brave enough to risk their own life’s to practice their religion the right way in secret. They knew what the repercussions would be harsh but they had to fight for what they believed in. I also want to praise the brave men and women who chose to fight back, like Douglass Dorsey who tried to poison his master after witnessing how brutally his mother was treated. The slaves used what they had to their advantage leaving the slave owners no other choice but to bargain with them; this is an epitome of how standing up for what you believe in can make a difference.

Problem of Slavery in A Troublesome Property. (2016, Feb 23). Retrieved from https://studymoose.com/problem-of-slavery-in-a-troublesome-property-essay 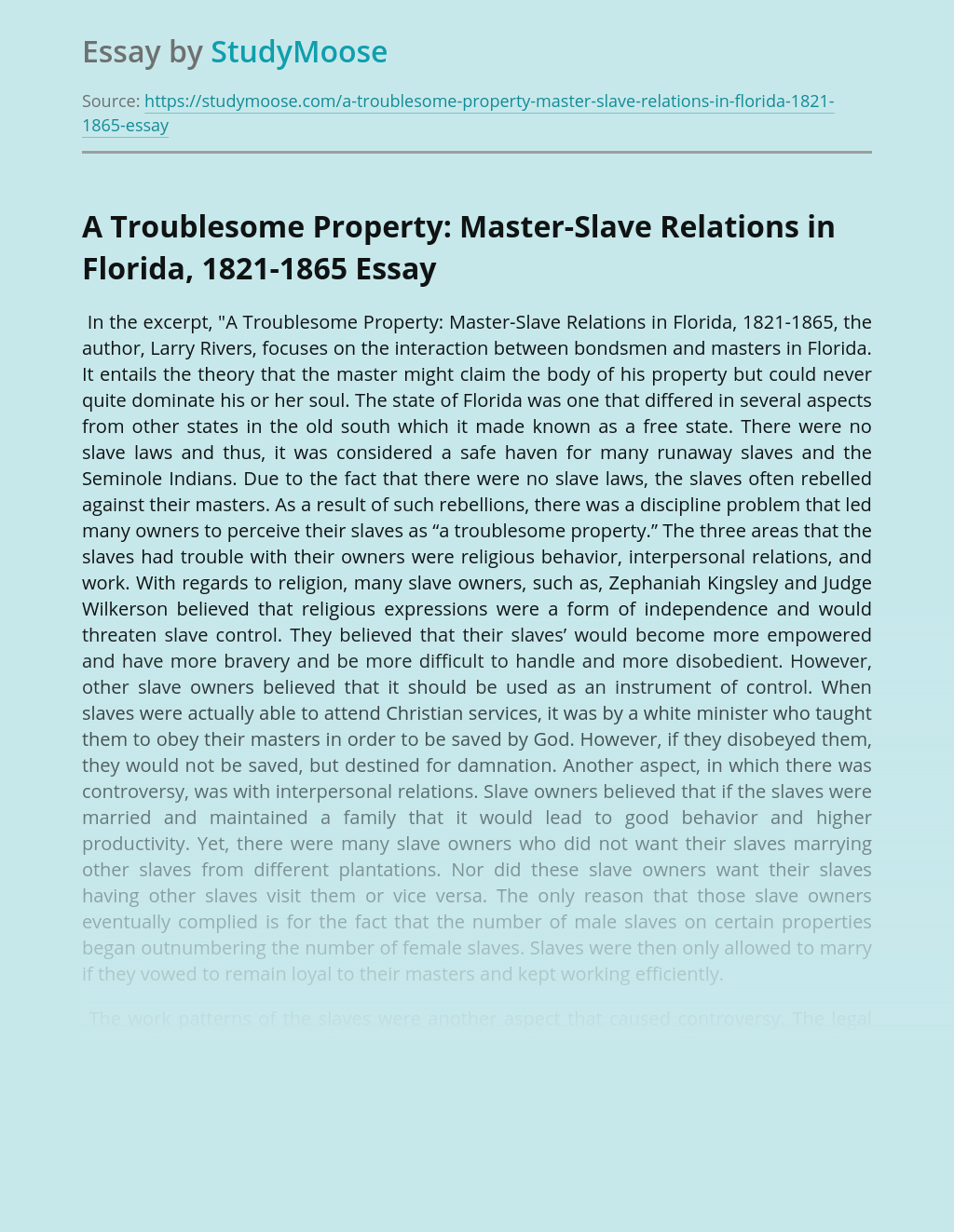 Turn in your highest-quality paper
Get a qualified writer to help you with
“ Problem of Slavery in A Troublesome Property ”
Get high-quality paper
Helping students since 2015
Stay Safe, Stay Original