Is the Prime Minister now effectively a President?

The prime minister of the United Kingdom is the leader of parliament and the head of the legislature; a president is the official head of state of a country. In the past 40 years, the UK has seen a shift in the role of the prime minister—from Lady Thatcher to David Cameron, the role and responsibilities of the PM have changed from the traditional ones. These shifts beg the question: are PMs now just presidents, or has British politics evolved?

Margaret Thatcher can be seen as arguably the first ‘president’ to rule the UK; Tony Blair, another pioneer in the presidential shift.

Don't use plagiarized sources. Get your custom essay on
“ Is the Prime Minister now effectively a President? ”
Get custom paper
NEW! smart matching with writer

These two figures have something in common: they’re large parliamentary majorities. These majorities allowed them to establish themselves as the dominating leader of their governments. They did not need to worry about whether or not they’d be able to push through legislation; they had the majorities to get it done. However, both of these leaders’ tenures ended prior to an election and in both of their places were leaders who were not able to fill the boots their predecessors left behind.

Major and Brown both faced unstable governments and weak parliamentary position. This shows that the UK premiership is not always president-like, it can only become that way with a strong leader and the right position in government. David Cameron’s coalition is another example of this, without the majorities of Thatcher and Blair he has been unable to dominate domestic politics and become the ‘president’ he would tries to be.

Another reason the PM can be seen now as effectively a president is the media’s promotion of them. The PM is shown to be the figurehead of the government—as the president is in the US—which gives the same associations for the people of the country. It is they who represent our country at world meetings, who meet other heads of states and who is seen to be responsible for the government—which can be seen with the lack of popularity of Gordon Brown as he resided of the government suffering the credit crunch. Blair’s premiership is a great example of this; his leadership of the G8 and EU in 2005 and his close relationships to Clinton and Bush allowed him to strike presidential poses. Therefore it can be seen that while the role of the prime minister hasn’t necessarily changed in itself, the perception of the role is what has changed. However, that would mean that the prime minister is not actually effectively a president and their powers, and limitations, remain the same, they are just seen to be more important in the modern era.

The role of the cabinet and the government branches

The role of the cabinet and the government branches have seemed to diminish in recent years, and this can be seen to be part of the shift to a more presidential PM. They are taking on more control themselves rather than the traditional delegation to government branches. For example, Christopher Meyer, former British Ambassador in Washington D.C. claimed that Jack Straw and the Foreign Office were sidelined, and most communication was directly between Downing Street and Washington. This shows a similarity between the British central government and White House machineries. It can be seen, therefore, that under Blair’s government, he would take on some of the responsibilities not usually done by a traditional PM, but ones that are done by a head of state.

However, Blair was often criticised for his interest in foreign policy and lack of interest in the home front, therefore his interest in assuming the role of a president in foreign affairs cannot be applied universally to the role of the prime minister. Also, government branches still do a lot of their traditional work, PMs can be seen to take on the additional responsibilities for things they are personally interest in, rather than taking presidential control of government. Cabinet still holds a strong role in limiting the powers of the PM—a reflection of party desires in the cabinet is key to maintaining a healthy majority, therefore a PM needs to bow at least some to the part in order to keep their role intact.

The role of the prime minister

Overall, then, it can be seen that the role of the prime minister largely remains the same as it always have in the UK, however in the modern era certain shifts have been made—some out of the PMs control altogether. While some may try to establish themselves as presidents, Thatcher and Blair in mind, some either can’t or even don’t want to. Therefore, the premiership of the UK can be seen to be whatever who holds it decides to make of it—they can either choose to dominate like a president (given the proper conditions), or they can stick to tradition and rule under the prime ministerial cabinet model.

Is the Prime Minister now effectively a President?. (2020, Jun 02). Retrieved from http://studymoose.com/prime-minister-now-effectively-president-new-essay 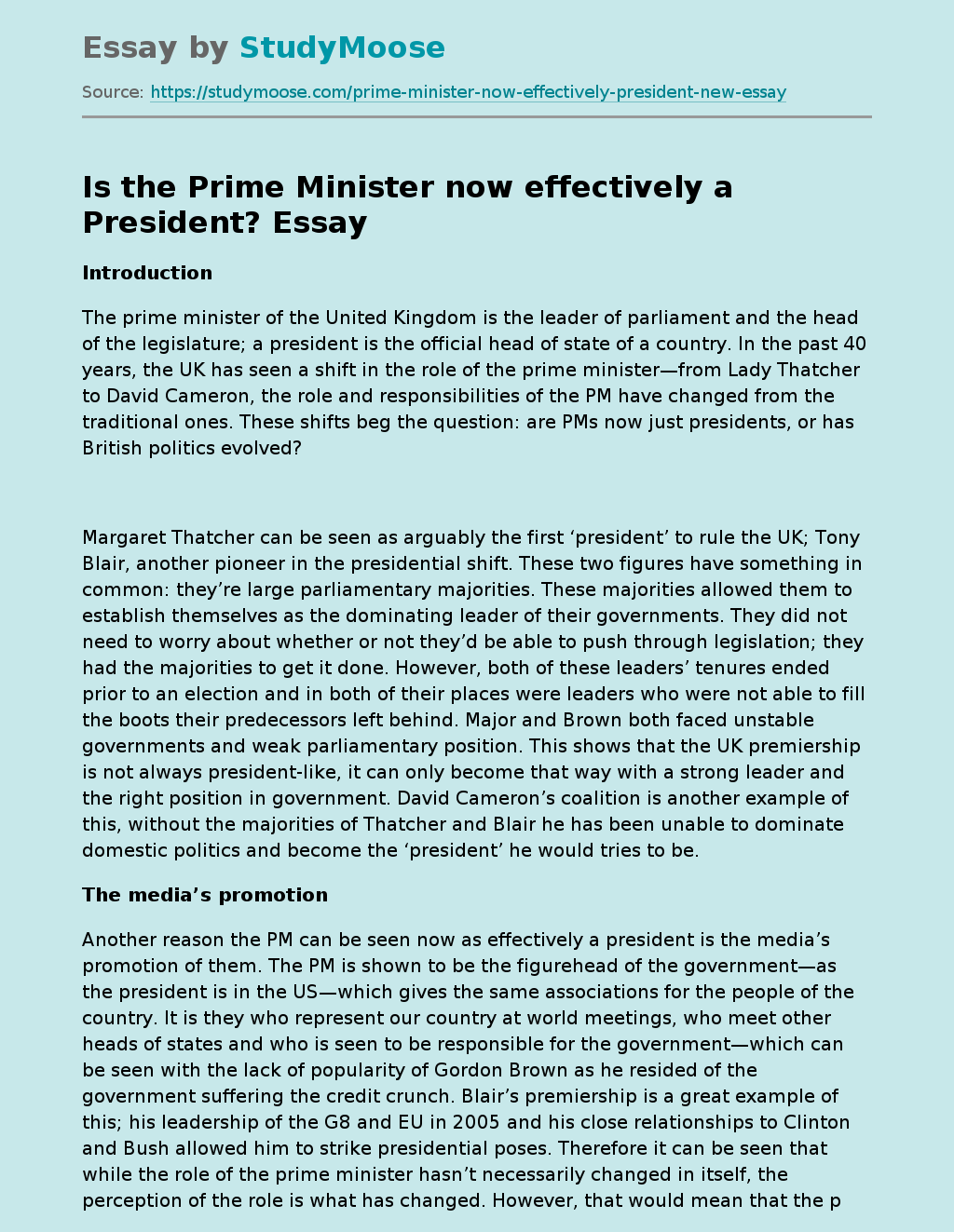