The present condition of our country regarding the use of plastics demands that people explore other means whereby proportionate products can be produced out of raw materials which are commonly disregarded. One of these is the utilization of solid wastes which could yield excellent useful results. Largely an agricultural country, Philippines provides various local raw materials, the utilization of which may lead to the country’s industrialization. Philippines provide ample farm products having great possibilities for some purposes.

An example of which is the coconut husk fiber or cocos nucifera.

Turn in your highest-quality paper
Get a qualified writer to help you with
“ Powdered Coconut Husk, Okra Mucilage, Water Hyacinth and Starch as Alternative Plastic Composites ”
Get high-quality paper
NEW! AI matching with writer

Although some use this for making native products, this study used this for an alternative bioplastic product making it more different than the usual ones. Water hyacinth, which is commonly found almost in some rivers and considered as another solid waste is to be used also in this project study. Although it has the same function as the coconut husk fiber, this is used to lessen the number or amount of water hyacinth in our environment because of its abundance and bad effects.

To improve the quality of the bioplastic product,the researchers used okra wherein mucilage can be found which lessens the brittleness of the said product because of the so called, glycirin. Another concerned material in the study is cornstarch. It is the source of polymer which is said to be the building blocks of the eco-friendly plastic product. What makes this study different is that the researchers used raw materials which are seldomly used in a more different way and utilize it to make a new product which could yield useful results.

Moreover, the main purpose of this study, is to make plastic that can be decomposed easily since it uses raw materials, to use starch instead of chemicals and to utilize some of the solid wastes in our society. Plastic is a versatile and potentially indestructible material, which makes it ideal for a number of commercial and household uses. Indeed, plastic has become a substitute for many items which used to be made from other substances, such as plastic bottles for drinks, condiments and many other more. In many cases, this is extremely useful and convenient.

However, usage of plastic has caused many environmental downsides. This is because, plastic is so resilient that even burying it deep within the Earth doesn’t keep it from impacting the environment. Although plastics can be recycled, many people still burn them and we all know that it is harmful to the environment. It may also affect people’s health because plastics contain many chemical additives which causes illnesses like endocrine disruption which can lead to cancers, birth defects, immune system suppression and developmental problems in children.

And worse it can also lead to toxicity of living organisms and marine animals. This ecological problem impelled the development of new materials that can be substitutes in producing biodegradable plastic which led us to think the utilization of eco- friendly materials that can be an alternative in making bioplastic. Scopes and Limitations The research study was concerned with utilizing coconut husk fibers or cocus nucifera and water hyacinth in producing a bioplastic product. The research focused not only on the simple production but also the quality of the said product in terms of brittleness and flexibility.

Mucilage was obtained from okra where glycirin is found and improves the brittleness of the product. Furthermore, this study is also concerned in using cornstarch as the source of polymer considered as the building blocks of the product. Statement of the Problem The purpose of this study is to produce an alternative plastic made up of organic materials. Another purpose of this study is to answer the following questions: 1. What will be the organic material used in making the plastic? 2. What content(s) is/are most effective in making the bioplastic more efficient than than

Plastics- any of a wide range of synthetic or semi-synthetic organic solids that are moldable. Plastics are typically organic polymers of high molecular mass, but they often contain other substances. They are usually synthetic, most commonly derived from petrochemicals, but many are partially natural. Biodegradable Plastics- plastics that will decompose in natural aerobic (composting) and anaerobic (landfill) environments. Biodegradation of plastics occurs when microorganisms metabolize the plastics to either ssimilable compounds or to humus-like materials that are less harmful to the environment.

They may be composed of either bioplastics, which are plastics whose components are derived from renewable raw materials, or petroleum-based plastics which contain additives. Glycerol- (or glycerine, glycerin) is a simple polyol compound. It is a colorless, odorless, viscous liquid that is widely used in pharmaceutical formulations. Glycerol has three hydroxyl groups that are responsible for its solubility in water and its hygroscopic nature. The glycerol backbone is central to all lipids known as triglycerides.

Glycerol is sweet-tasting and of low toxicity. Polymer- is the main building block of all plastics. It is a large molecule (macromolecule) composed of repeating structural units. These sub-units are typically connected by covalent chemical bonds. Although the term polymer is sometimes taken to refer to plastics, it actually encompasses a large class of compounds comprising both natural and synthetic materials with a wide variety of properties. Mucilage- a thick, gluey substance produced by nearly all plants and some microorganisms.

It is a polar glycoprotein and an exopolysaccharide. Mucilage in plants plays a role in the storage of water and food, seed germination, and thickening membranes. Starch- or amylum is a carbohydrate consisting of a large number of glucose units joined by glycosidic bonds. This polysaccharide is produced by all green plants as an energy store. It is the most common carbohydrate in the human diet and is contained in large amounts in such staple foods as potatoes, wheat, maize (corn), rice, and cassava. Starch is made of two basic components: amylose and amylopectin.

Amylose- is a very long and straight polymer like we want to have in our study. Amylopectin- on the other hand is a branched and short polymer meaning it will yield brittle and weak plastic which is not good. Vinegar- a liquid substance consisting mainly of acetic acid (CH3CO2H) and water, the acetic acid being produced through the fermentation of ethanol by acetic acid bacteria. By adding a small amount of vinegar to the plastic, we can break up some of the branches of the amylopectin which otherwise would make it brittle.

Water hyacinth- is a free-floating perennial aquatic plant native to tropical and sub-tropical South America. With broad, thick, glossy, ovate leaves, water hyacinth may rise above the surface of the water as much as 1 meter in height. The leaves are 10–20 cm across, and float above the water surface. They have long, spongy and bulbous stalks. The feathery, freely hanging roots are purple-black. An erect stalk supports a single spike of 8-15 conspicuously attractive flowers, mostly lavender to pink in colour with six petals. 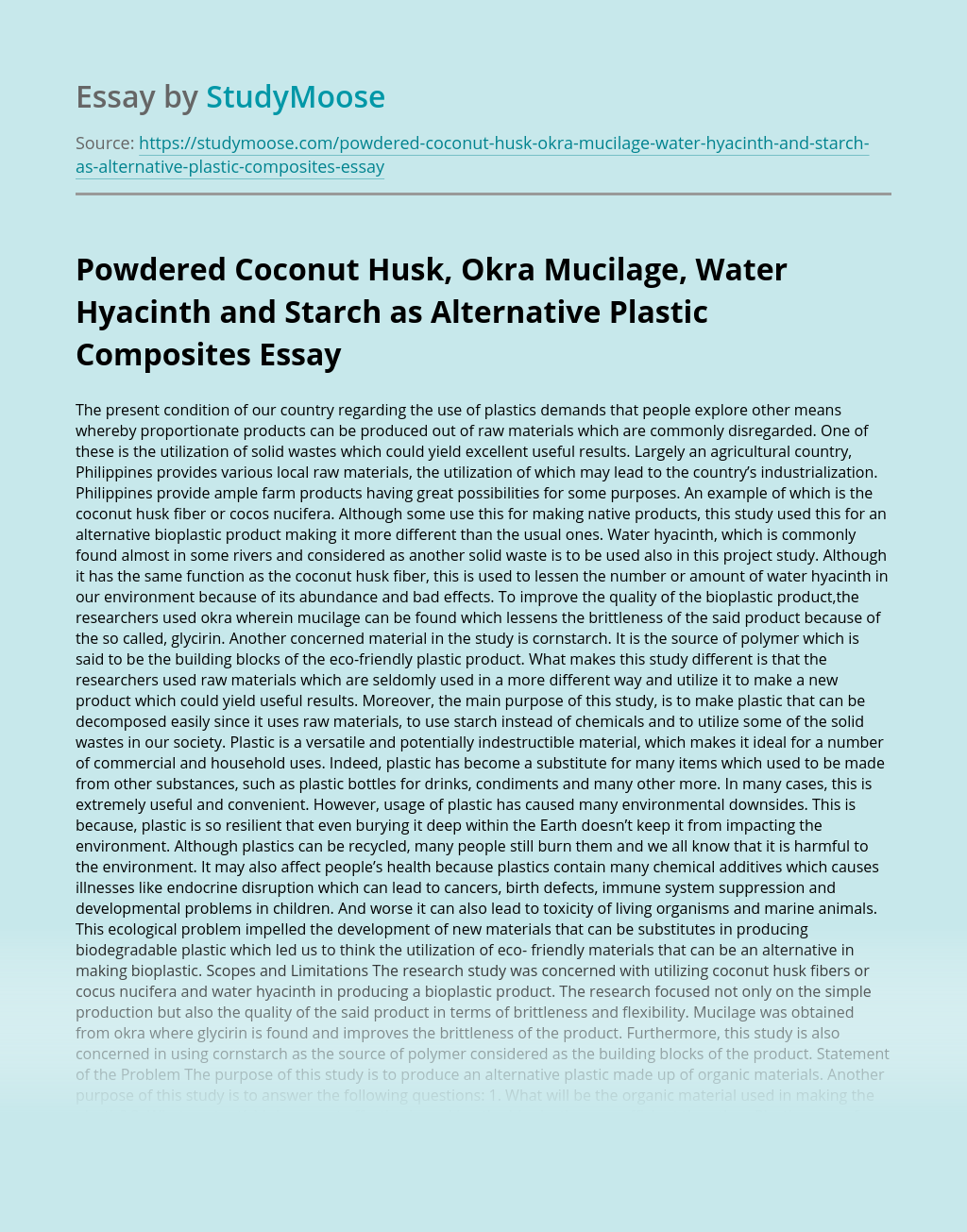 Turn in your highest-quality paper
Get a qualified writer to help you with
“ Powdered Coconut Husk, Okra Mucilage, Water Hyacinth and Starch as Alternative Plastic Composites ”
Get high-quality paper
Helping students since 2015
Stay Safe, Stay Original