Over the years , we as a society have become insensitive to the major issues faced by the mankind and homelessness is one of those major issues. Millions of people, including children, families , babies ,veterans and elderly live day after day without food, water or a roof over their heads. People who are mentally ill also have it tough on the streets, which can be extremely confusing to them and dangerous to the rest of society.

As the con side of this argument, it can be understood as a problem that must be solved soon and therefore should be addressed as major crises affecting the society.

Turn in your highest-quality paper
Get a qualified writer to help you with
“ Poverty and Homelessness ”
Get high-quality paper
NEW! AI matching with writers

At the same time, I argue that it is not as big problem as it is made out to be. There are various reasons for why people are homeless and some of those reasons ,along with their effects as well as solutions are mentioned in this essay. The majority of homeless people are adult men. Many of these men choose to be homeless because that is the free lifestyle they want to live.

Same is the case with many women and children. Homelessness life is not always as bad as it seems. Homelessness people have all the time in the world, they are free to do whatever they like without any restrictions. They can read books, take walks, go for hang outs and enjoy nature. There are the drawbacks of diminished health, alcohol and drugs and looks of disdain from other people, but any homeless people just live in their own world and enjoy it.

According to my thought, homeless should just be allowed to live their lives.

Second reason that can be considered as important for homelessness is that there are those people who do not make the choice of becoming homeless, but are forced of becoming homeless because of economic issues. For example, as the population is increasing at a very fast pace , it is getting difficult for everyone to find a job and as a result, unemployment prevails which directly leads to the issue of becoming homeless. There are the people that we need to help out financially.

Thirdly, there are some people who make the choice of being homeless because they simply do not want to support themselves, these are the people that need to receive professional medical help. Our society can be seen as adversely affected by the problem of homelessness. Having no home can make it extremely hard for adults to get or keep work, being one of the causes of poverty which in addition to helping to maintain homelessness also helps turn households trying to be useful rospering citizens into victimized anti-social problem households breeding further poverty, drug addiction, alcoholism and crime. Homeless young people are much more likely to be not in education. In other words, the homeless people can not get access to a better education because they do not have the resources to fulfill their basic needs. Poor qualification, in turn, act as a barrier in finding job, as a result, future of the homeless people is spoiled. Poverty and desperation means some homeless people turn to crime.

This further decreases the chances of them finding work and escaping their situation. Homeless young people are more likely to be the victims of crime. Their situation puts them at risk of exploitation, particularly if they become homeless at a very young age. Homelessness has a huge effect on an individual’s both physical and emotional health. Homeless men and women suffer from cold that they can not get rid of because they have no access to medicine, food and warm housing. They also are more at risk for dependency on drugs and alcohol and contracting HIV.

They suffer from vitamin deficiencies and often don’t get adequate sleep. Homeless people have no housing to protect themselves from physical violence and even rape. These can lead to emotional breakdowns that lead them to become institutionalized. In sum, homelessness is not a big issue for those who desires to be homeless, for instance , people who do not want to have social contacts with others , but , for the persons who are forced to become homeless ,it is a huge problem and needs to be solved. There seems to be two main elements in saving a homeless person.

The government needs to help homeless people get back on their feet. They need to make sure also that homeless people do not abuse systems such as social security and housing. Also, homeless need to get up on their own two feet, for themselves. Finding jobs, such as selling “Homeless Newspapers” seems to be a common first step. To illustrate, a vendor gets the papers for free or low cost, sells them for something like a dollar and keeps 55 cents, or a little more than a half, for each sold. The homeless can then use this money to pay for food, shelter and other basic necessities.

Many shelters exist whose primary goal is to provide homeless with a job and home. We help these people everyday without knowing as a proportion of our taxes go back to the community in many forms and one form is helping out the homeless. One can also help the homeless by volunteering at shelters. So if the government is willing to help get the homeless roused into the wanting of a better life, and they wish to follow through, then I suppose we could find a better, faster way to end the nation’s problem of homelessness. 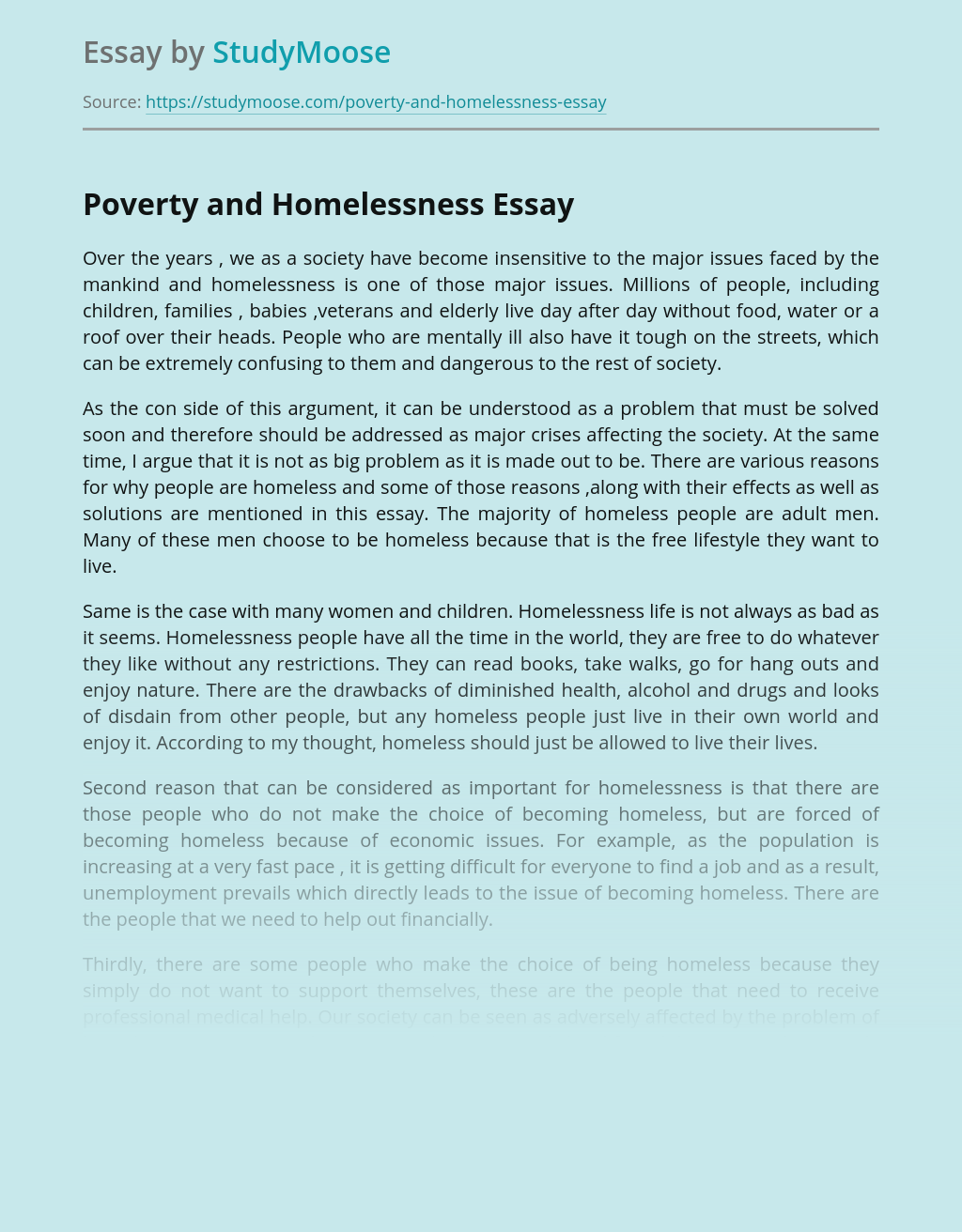 Turn in your highest-quality paper
Get a qualified writer to help you with
“ Poverty and Homelessness ”
Get high-quality paper
Helping students since 2015
Stay Safe, Stay Original