Pottery in the Philippines

Pottery is defined as the art or craft of a potter to manufacture material from which pottery ware is made. It can be made from earthenware, porcelain or stoneware. According to the American Society for Testing and Materials (ASTM), pottery is defined as all fired ceramic wares that contain clay materials. Pottery uses clay and may sometimes be mixed with other materials to form the clay body. Clay bodies differ in physical stages during the making of pottery. Earthenware, an example, is made of clay produced in a swampy area or in open fields near riverbanks.

Don't use plagiarized sources.
Get Your Custom Essay on Pottery in the Philippines Just from $13,9/Page

The process of pottery involves forming or shaping a clay body into your desired shape. It is then heated to high temperatures in a kiln that removes excess water thereby hardening the clay and setting it to a permanent shape. For aesthetic purposes, the clay body may be decorated before or after the firing process. Kneading the clay body is an important step prior to shaping the clay.

It ensures an even distribution of moisture content and removes the air bubbles trapped within the clay body. Pottery is found in almost all archaeological sites. In fact, pottery has provided archaeologists with information about the past, mainly about trade and technology.

EMERGENCE OF THE FIRST POTTERY

The emergence of pottery in the Philippines indicates the complexity of cultural development during the Neolithic Period. Like the rest of the early people in other parts of the world, the early man and woman in the Philippines were also highly dependent on nature. Nature provided them with the basic necessities needed for survival. In earlier times, vessels such as leaves and tree barks were used in gathering food. Not long after, the early people learned to cook using the vessels. According to Valdes (Pang-alay), humans discovered the properties of clay and how it hardens when tempered with sand and fire.

Before the Spaniards set foot in the Philippines and spread Christianity, the early Filipinos were pagan worshippers. Paganism refers to indigenous religious traditions wherein people worshipped animals and deities. The discovery of pottery led them to fashion effigies called tao-tao by the Visayans and likha or larawan by the Tagalogs.

In paganism, they offer special offerings of fruits and perfumes to appease the spirits they worship. It was believed that refusing to offer special presents to the spirits would anger them and bring illness and misfortune. The offerings were placed in earthenware pottery and offered in the fields for the spirits.

The early Filipinos also believed in life after death. For this reason, they took special care of the dead and gave “pabaon” for their journey in the afterlife. The bereaved brought food contained in clay vessels or palayok as offerings (Fox, 1959). The clay pots that were used as ritual vessels were the same pots used in their daily life. As time passed, the designs of the vessels became finer and more intricate.

GOLDEN AGE OF POTTERY IN THE PHILIPPINES

The Golden Age of Philippine pottery was ascertained to be during the period when the use of metals flourished, about 2000 years B.C., but some of the earliest pottery discovered dated further back in the Neolithic Age when the development of horticulture and animal domestication dominated.

There is little of Philippine Neolithic pottery left extant as stated by Jesus T. Peralta in his work, “Pottery and Ceramics Excavated in the Philippines”. Some potteries excavated in sites widely spread in the Philippines indicate original designs and attempts for aesthetic designs in their construction. During this time, pottery was made to suit ones need whether for household or burial needs.

POTTERY IN THE METAL AGE

The start of the Metal Age marked the development of pottery technology estimated to be between 500 B.C.E. and 900 C.E. Specific typologies of pottery surfaced. Larger pieces of burial jars were said to have appeared during this age. Evidences of pottery with elaborate and intricate designs on their vessels that were prominent during this age were unearthed in Palawan. Apart from Palawan, the same markers were also found in Masbate, known as the Kalanay Complex site. The excavation was lead by Dr. Wilhelm Solheim II in the 1950s where they found earthenware pottery.Evidences of pottery dating back to the Metal Age were found in archaeological sites in Cebu by archaeologists from the University of San Carlos and the National Museum in the summer of 2011.

POTTERY AS USED FOR BURIALS

Filipinos, in the past and in the present, heavily believe in the afterlife. Giving respect to the dead has been a custom from way back. Since Filipinos in the past believe in “pabaon”, the ceramic potteries they acquire from trading with other countries like China are buried together with their deceased loved ones. The ceramics were treated as valuables rather that for utilitarian purposes.

Burial jars unearthed in the Philippines were dated back to the Neolithic Period. Anthropomorphism had become a dominant design. It is the personification or attribution of human characteristics to inanimate object, in this case, jars or pottery. These jars, made of earthenware, are designed like human figures complete with facial characteristics. The Mannunggul jar, Maitum Anthopomorphic potteries, and Leta-leta potteries from Palawan have greatly contributed to the understanding of burial customs during the early times.

Evidences of contacts with Mainland and the rest of South East Asia were evident in trade and cultural exchanges. The production of domestic pottery became competitive increasing the pressure on the international market in the South Seas (Peralta). Pottery trades with China were most evident.

Traditional ceramics are composed of clay minerals (i.e. porcelain), as well as cement and glass. Ceramic artifacts have been useful in archaeology for understanding culture, technology and behavior of people in the past since they are among the most common artifacts to be found. Sherd is a term referred to small fragments of broken pottery.

During the Pre-Christian era, highly-fired ceramic wares were evident in China. Ceramic technology in the mainland was very advanced and kaolin, very fine clay that can be fired to high temperatures, was the contributory factor. Kilns in China became known for their ability to produce temperatures well-above 1300°. Ceramics from China were deemed to be of superior quality and thus were preferred over low-fired ceramics from other lands.

H. Otley Beyer mentioned the recovery of three-colored ceramic shards from Tang Dynasty in the Philippines that verified the early trade networks of the early Filipinos with Mainland Asia. According to text, the discovered shards were systematically excavated from sites giving way to a large drawback on the presence of Tang Dynasty ceramics. However, in the 1980s, a site in Laurel near the edge of Taal Lake in Batangas was excavated and shards of of polychrome glazed jars were recovered. Polychrome glaze, obtained by using coloring agents such as copper, iron, manganese, and cobalt, was a product of Tang Dynasty.

With the development of technology, modern ways on how to do pottery have been developed. Pottery equipment machines have been invented to make pottery for industrial purposes. Nevertheless, the art of pottery still struggles to live and strives to remain as a priceless piece of folk art.

In places across the country, the art of making pottery in the primordial way still lives on. In the province of Antique, potters of Barangay Bari in Sibalom still adapt the traditional process of pottery. The potters, known as “manugdihon kang kuron”, have been famous for making good quality and durable pottery. Likewise, in an area in Vigan, Ilocos Sur known as Pagburnayan, traditional pottery methods are also practiced by workers.

Pottery is one of the most primordial arts that helped developed our culture. Preserving the traditional way of making pottery and keeping artifacts intact will also help in preserving Philippine tradition and culture that will benefit the future generations.

Pottery in the Philippines. (2016, Oct 26). Retrieved from https://studymoose.com/pottery-in-the-philippines-essay 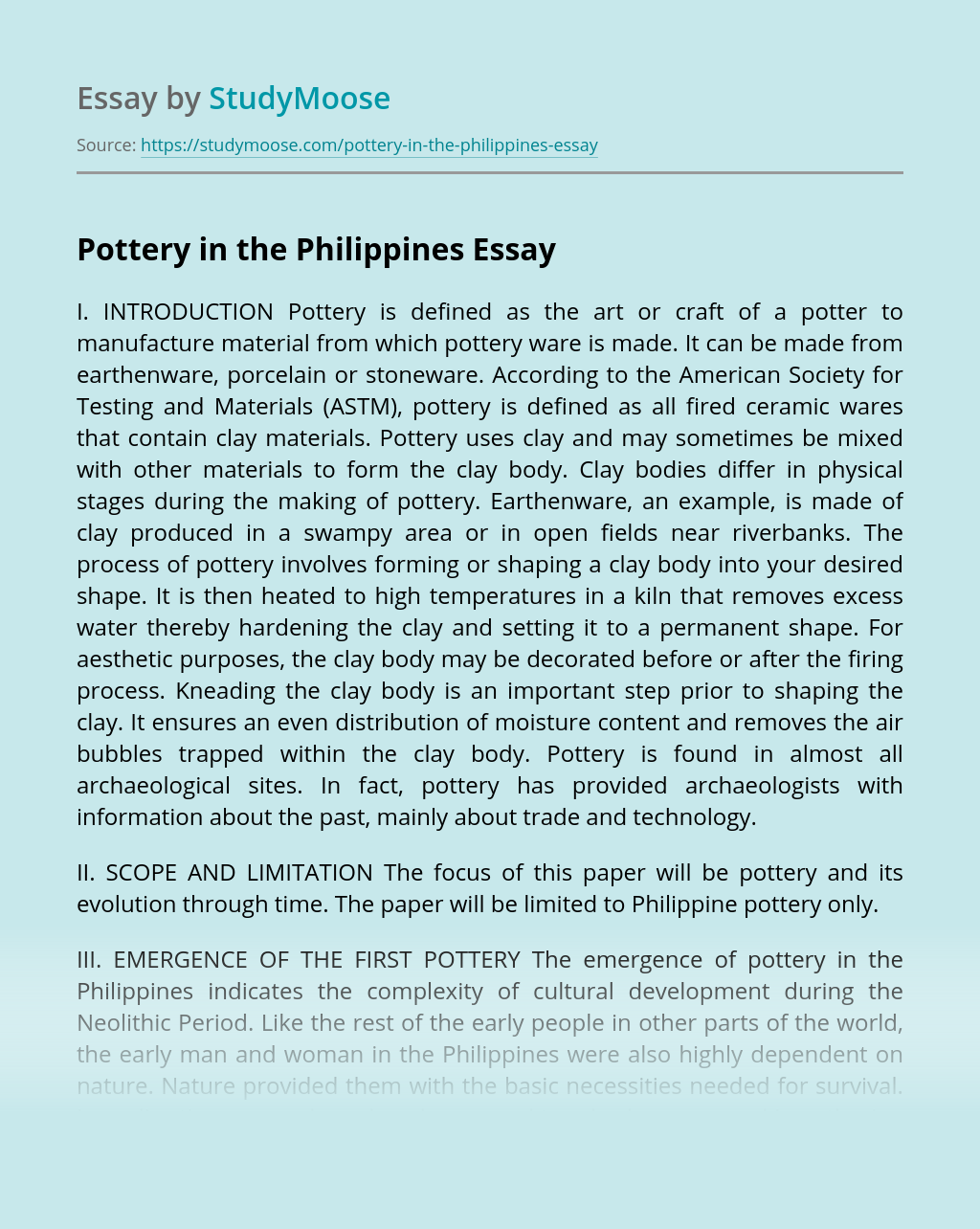 The World During Rizal's Time

During the 19th century Spain invested heavily in education and infrastructure. Through the Education Decree of December 20, 1863, Queen Isabella II of Spain decreed the establishment of a free public school system that used Spanish as the language of instruction, leading to increasing numbers of educated Filipinos. [82] Additionally, the opening of the Suez...

Student Satisfaction in University of the Philippines

This study assessed the indicators and formulated an index for overall satisfaction among UPLB students. Two methods were used in formulating an index for this study, in which nine dimensions were considered. First method is through stepwise regression analysis with Categorical Principal Component Analysis (CATPCA) wherein three tests were used to evaluate the obtained components:...

INTRODUCTION PLDT is the leader in supplying telecommunication services in the nation. The company’s service can be divided into 3 main business areas: fixed line, wireless, and details and interaction innovation. PLDT is the leading telecommunications service company in the Philippines. Through its three principal organisation groups-wireless, set line, and information and interactions technology-PLDT provides...

The first thing you’ll notice about the painting is its size. Standing at 4 meters in height and 7 meters in width, the painting no doubt commands attention and gives off a majestic aura. Any viewer of the painting will feel dwarfed by the large painting and may feel overwhelmed by the magnanimity of it....

The Indolence of the Filipino People Reaction Paper

I. BACKGROUND The essay was written by Jose Rizal during the writing of La Solidaridad in 1887 in Berlin. The essay itself originally appeared in the Filipino forthrightly review, La Solidaridad, of Madrid, in five installments, running from July 15 to September 15, 1890. According to Mr. Charles Derbyshire, it was a continuation of Rizal’s...