Nestlé Philippines, Inc. (NPI) is a leading manufacturer of food and beverage in the Philippines. It was established in the country in the early 1930s, initially as a trading company. By the year 1962, it formed a joint venture with San Miguel Corporation (SMC), a company specializing in brewing with extensive interests in agribusiness and food products. In 1996, San Miguel’s Magnolia Foods Division had been merged with Nestlé. It produced and sold products like Magnolia ice creams and tetra pack juices, Bear Brand and Carnation condensed milk, Bertolli pastas and tomato sauce, Maggi seasonings, pasta and mayonnaise, and Smarties candies.

Turn in your highest-quality paper
Get a qualified writer to help you with
“ Nestle Company Philippines ”
Get high-quality paper
NEW! AI matching with writer

Nestlé’s Instant Drink Division produced and sold Nescafé, Nestea, Milo, Coffee Mate and Milkmaid powdered milk. Nestlé Philippines is ranked number 10 among Nestlé subsidiaries worldwide and number 3 in Asia-Pacific, behind Japan and Australia. Nestlé is the only foreign-owned coffee producer in the Philippines. Nescafé –already a household name in the Philippines needs to respond to major changes in the environment.

Competing brands like Great Taste and Nescafé’s nearest competitor, Blend 45 already reduced or are planning to reduce their prices.

There are also major changes in Government Regulation, Imports and Market Entry resulting to the potential entry of foreign brands like Kraft General Foods’s Maxwell House and Procter & Gamble’s Folgers Coffee. The company needs to decide whether it should import Arabica beans for blending Master Roaster coffee, change the composition of Nescafé by importing Arabica beans to the same composition as those sold abroad, and whether it should continue producing Taster’s Choice which are made from Philippine-grown Robusta and Imported Arabica.

Nestlé’s Instant Drink Division contributes 75% of the company’s total sales; Nescafé contributes 53% of the department sales. In 1996, Nescafé’s market share increased from 52% to 66%. Nestlé have 40 independently-owned warehouses located throughout the Philippines. These warehouses, along with 200 salespersons cater 20,000 dealers who had accounts with Nestlé, with direct access for orders and credit lines. The company’s production facilities however are already strained to the limit. The company spent 5% of sales on advertising and promotion of Nescafé which includes decorative streamers and raffle draws. The company also offered volume “bonus discounts”. According to market research, the bonus promotions are Nestlé’s most effective promotional offering.

However, Nestlé doesn’t buy shelf space, which is a common practice in the Philippines and other Asian countries. Instead it prefers rental of special display space for promotion, which is considered as the most expensive real estate in the Philippines. There is a significant increase in the number of households that purchased coffee within two weeks, from 67% in 1974, to 96% in 1995. This is due to the relatively high usage of 1.7 gram foil packs in the Philippines. These 1.7 gram individual packs contribute 8% of Nescafé’s sales. Coffee is typically drunk with sugar and without milk or non-dairy whiteners. However, there is a 350% increase in the use of such whiteners over the past decade. The Carnation brand which produces whiteners, condensed milk and powdered milk is owned by Nestlé. One of the reasons behind the rapid increase in volume and market share is the fall of green coffee bean prices both in the world market and Philippines.

The price of green coffee beans, where Nestlé sourced all its coffee fell by 50%; these beans comprised about 30% of the delivery costs. Nestlé and other producers are able to lower their prices because of the savings. Another reason is the introduction of cheaper packaging. Bottles make up 30% of the total cost. Hence, coffee sold on bottles are more expensive at PHP 26.25 for a 50-gram pack while those in foil packaging are sold only at PHP 20.45. Research by Nestlé shows that its market share is highest in small stores located in large cities. Conversely, among small stores, its market share is highest outside big cities. People outside big cities prefer to shop in sari-sari stores. The prices of commodities sold in sari-sari stores are 15% higher than in supermarkets outside big cities and 20% higher than those in big cities.

Over the past decade, other producers, who sold their coffee 10% below the price of Nescafé, entered the market. Nescafé gradually lost market share from 75% in 1965, to 60% in 1975, and finally, 55% in 1985. However, there was a decline in coffee prices in the 1980s, giving Nestlé a window to reduce its prices to within 5% of its competitors and still preserve its margins. Other major producers of coffee in the Philippines include: Blend 45 which has 15% market share in 1996, Great Taste with 10% market share, Kafe de Oro with 6% market share and Café Filipino which has 3% market share. The Gokongwei Group’s Blend 45 employs a cheaper blend of coffee and carbohydrates. In 1996, they dropped the price of Blend 45.

They are sold 28% below Nestlé’s price and 20% below most of the other brands sold in the market. So far the price increase made no significant effect yet on the market share of Nescafé. Prior to 1996, the import of coffee beans, either unprocessed or processed is prohibited. All of the coffee sold within the Philippines had to be produced within the country. The quality of Robusta beans grown in the country was of international quality. On the other hand, the quality of Arabica beans was of inferior quality. Consequently, Nestlé used 100% Robusta unlike those processed in the U.S. or Europe which are blends. Nestlé’s Master Roaster coffee is made from locally grown Robusta and Arabica beans. Taster’s Choice, on the other hand is made from locally grown Robusta and imported Arabica. In 1996, the Philippine Government committed under GATT and WTO to remove import prohibitions on agricultural products. Hence, a Minimum Access Volume (MAV) was set. Imports of green and roasted beans and packaged products are charged a tariff of 30% while those outside the MAV are charged 100%.

The government, however committed to increase the MAV and reduce the tariff in imports both within the MAV and outside it. Nestlé is facing the threat of importers, both from the U.S. and regional coffee producers. One of which is Indonesia’s Indocafé which already begun production in Malaysia and exporting to Vietnam and is rumored to invest in China and export to the Philippines. Indocafé is sold 10% below the price of Nescafé in both markets. It has backward integration with its own coffee plantations so it was buffered from price swings. Another possible importer is Singapore’s Supermix who pioneered in individual “3-in-1” packs within Singapore and in other nearby countries. In the 1990s, the Philippine Government liberalized regulations on Foreign Direct Investments.

Prior to that, investments with sales direct to domestic market had to be 40% Filipino-owned. In 1992, the government allowed 100% foreign ownership in most industries. As a result, Kraft General Foods which had substantial production operations in the Philippines is rumored to produce Maxwell House within the country. Procter & Gamble which also had substantial production in the Philippines also announced that it would produce Folgers Coffee in the country.

One of the possible alternative courses of action is to increase the production capacity of Nestlé’s facilities. Upgrading the capacity would enable Nestlé to experiment on product development without the possible reduction of Nescafé’s already established market share. However, the upgrade would require $3 million worth of investments. Another possible option is to focus substantial amount of investment for the marketing and sales of Master Roaster coffee which is currently made up of locally produced Robusta and Arabica. Nestlé could either import Arabica beans to improve the taste of Master Roaster, which is now possible due to the major changes in import regulation.

The brand would cater Nestlé’s high-end consumers. However, it would reduce the company’s current production capacity of the current blends. Lastly, Nestlé could modify the Nescafé and use imported Arabica and locally produced Robusta to copy the foreign blend. This would make Nescafé a high-end product which could match imported brands. Again, this is possible because of the favorable changes in import regulation. However, this modification might result in Nescafé losing significant amount of market share and household penetration. V. CONCLUSION

To react to the major changes in the environment, Nestlé should lower the price of Nescafé closer to its competitors. According to research, there is a direct relationship between coffee prices and household penetration. Hence, the price reduction would make the product even more accessible to the masses. In return, the company would gain even higher market share. In response to the threats of the entry of imported brands in the country, Nestlé should continue producing Taster’s Choice and discontinue the unsuccessful Master Roaster. Taster’s Choice would both accommodate a separate market segment and the increasing “import mentality” of Filipinos. Importation of either Arabica beans or finished product is possible because of the changes in import regulation. Lastly, Nestlé should consider buying shelf spaces. Besides the fact that it is a proven and common practice not only in the Philippines but also in other Asian countries, it is more economical than renting special display spaces. Nonetheless, Nestlé should only lessen, not stop renting special display spaces.

In order to sustain the changes made, Nestlé should explore the use even cheaper packaging materials. The savings, in turn would enable the company to reduce the prices of Nescafé. The company should also actively promote its 1.7 gram individual packs and “3-in-1” packs. This would result to the brand gaining more market penetration, translating to a better market position. It should also aggressively promote both Nescafé and Taster’s Choice which satisfies different market segments.

Nestlé should engage in more product development activities, like for example new flavors of coffee. Considering it is a multinational company, it will have the advantage of increased awareness in the current trends abroad. A development in the existing product lines would not only generate more market shares but also create new market segments. Filipinos would accept the idea of these improvements because of their import mentality.

However, there should be enough market research regarding such improvements to make sure they are feasible in the Philippine setting. Also, Nestlé should capitalize on its strength of having close relationships with its farmers. It should procure its raw materials in a manner that would benefit farmers. There should be more capacity building trainings among its coffee suppliers in order to promote increased productivity. 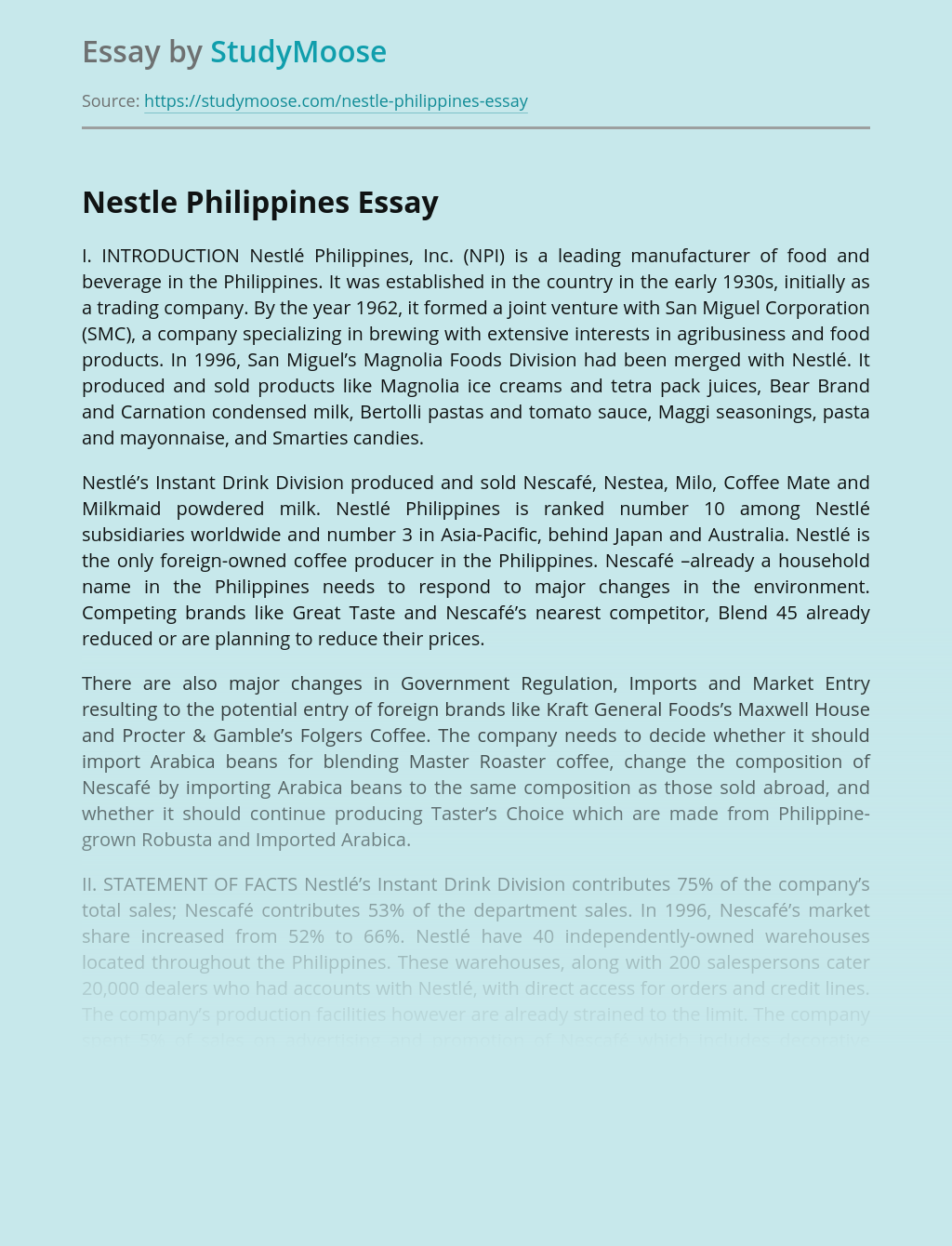 Turn in your highest-quality paper
Get a qualified writer to help you with
“ Nestle Company Philippines ”
Get high-quality paper
Helping students since 2015
Stay Safe, Stay Original