I. INTRODUCTION
Background of the Case
Nestle came to the Philippine as a trading company . They are the largest producer and marketer of food products in the world who merged with San Miguel Corporation.Nestle is the only multinational enterprise that produced coffee in the Philippines and no other foreign brand names produced under license. Nestle was also the most transitional company in the world with billions of sales, assets and profits. Although coffee consumption in the Philippines has increased double so as the market share gaining from 52% to 66% .

Turn in your highest-quality paper
Get a qualified writer to help you with
“ Nestle Strategic Management ”
Get high-quality paper
NEW! AI matching with writer

Their position in the market has been rising and falling due to the continuous entry of foreign competitor and the increasing production cost of raw materials.

Over the past years, market share of Nestle in terms of coffee products has been fluctuating due to the new entry of branded and non-branded products. Although Nescafe has a strong brand name still the management is concern on how they can strategically maintain and improve the performance of their product from a globally competitive world.

Moreover, an increasing dilemma of Nescafe emerges from the entries of foreign investors who caters a lower price of their coffee brand and are aggressively competing with them in Philippine market.

Objectives of the Case Study
The objectives of this study is to know (1) what are the threats that affect Nestlé’s pose in the market and (2) the strategies and tactics to maintain a high market share despite a globally competitive world.

II. FACTS OF THE CASE
In 1905 Nestlé was created after a merger between the Farine Lactee Henri Nestlé Company and Anglo Swiss Milk and was diversified into a wide range of products during the post war period.

And in 1930’s, Nestle came to the Philippines as a trading company joining San Miguel Corporation who was at time the largest brewer in the country associated with different diversified products. By venturing with San Miguel Corporation, Nestle had given then 45 percent equity share while the rest sixty five percent was owned by Nestle AA of Switzerland. Nestle Switzerland was the largest producer and marketer of food products in the world wherein it ranked ninth based on its asset and twenty fifth on the sales. In terms of employment, Nestle ranked as tenth and was brand as the most transitional company in the world. Nestle Philippines has produce and sold products from ice cream to tetra pack juices, pastas and sauces, seasonings and dressings, candies and condense milks. Moreover, they also sold Nescafe, Nestea, Milo, Coffee mate and other powdered milk. Together, these products represented seventy five percent of Nestle Sales. Meanwhile, Nescafe alone has represented fifty three percent of the department sales making the Nestle Philippines ranked tenth among Nestle subsidiaries worldwide and 3rd in the Asia Pacific region. In early 1990’s the government had greatly liberalized its regulations on foreign direct investment. Most FDI with sales directed to the domestic markets had to be at least 40% Filipino Owned. Laws were change in 1992 wherein 100 % foreign ownership was allowed in most industries, thus, wholesale distribution was opened to foreign investors. Because if the smooth transition from President Aquino to President Ramos in 1992, economic growth had begun to accelerate expecting to reach 7% in 1996 Nescafe was viewed as premium product yet many people tend to shop in a small store despite the price difference 20% lower price. According the research that they have conducted its market was highest in a small stores, amongst this, market share was highest outside the big cities Historically, Nescafe had been a major producer of coffee in the Philippines. In 1996, Nescafe commanded a 66 percent of the coffee market in the Philippines. Nescafe had a very strong image and became the household brand when ordering in a restaurant. However, Great Taste who was founded by Gokongwei Group and other producers who were entering in the market was offering a big discount over Nestlé’s price has given Nestle a loss of market share from 75% in 1965, 60% until
55% on the proceeding years. With this, Nestle had to reduce its price within 5% of its competitors but still preserving the margins. This starts for Nestle to regain its market share. Prior to 1996, imports of coffee beans, processed coffee in bulk, and package coffee had been prohibited. All coffee sold in the Philippines had to be produce in the Philippines And all coffee produced in the Philippines had to be made and grown in the Philippines. But in January 1996, the situation had changed radically. The Philippines government had committed under GATT and WTO to remove many of its import prohibitions generally in agricultural products. Overtime the government had committed to increase Minimum access volume (MAV), reduce tariff on imports within MAV, and reduce tariff on import outside MAV. This has given Nestle a dilemma on facing a threat of imports especially that awareness of foreign brand was very high in the Philippines With the objective of Nestle of selling coffee at best price, size and taste in all segments of market, they have took several initiatives to retain and reinforce their market position. Basically, Nestle never believed in price competition because they can withstand others and retain their position in the market through their strong brand name and reputation.

III. ANALYSIS OF THE PROBLEM

Strength
Nestle is the largest producer and marketer of food products with over 100 factories operating in the world. In addition, Nestle was named as transitional company in the world. Furthermore, Nestle provides quality brands and products and line extensions that are well-known, top-selling international brands. Weakness

They have less customers as per research in few areas. They do not have direct market outlets and this can be one of the weaknesses as it can cause difference in profit made. Moreover, their weakness is not having enough raw material production units; they depend on either local raw material producers or through other trade channels. Also, the branding and promotion of Nestle is not extensive, therefore competitors get chance to penetrate in the market by fetching substantial share of the market Opportunities

Nestlé’s weakness of not having a direct outlet can be converted as an opportunity by introduction of new direct outlets. Merging of Nestle with San Miguel Corporation, is an example of opportunity through this merging nestle can enter the new market, which is easy because of the existing companies.

Nestles threat would be the fast growing international brand of its competitors who are now entering in the coffee market and are capturing the curiosity of consumers. This affects the market of Nestle since Nescafe struck as a local brand and Filipinos are more likely to have this “imported mentality” that prefer imported products than those of Filipino made. Another threat would be the increasing price of raw materials.

IV ALTERNATIVE COURSE OF ACTION.
1. Invest in Research and Development. Through Research and Development they could come up with a more innovative ways on how to improve their products according to the needs and wants of their customers. 2. Produce more effective promotions. This marketing strategy will help Nestle to outwit their competitors and capture the heart of consumers. Promotion is one of the best ways to keep the familiarity of their consumers on brands. Promotion can be though TV and Radio advertisements, Print ads, social networking site and sampling of products to target customers.

3. Rehabilitation of facilities, factories and local farms. Since one of the factors that affect the market share of Nestle is the lack of direct outlets they might as well invest in installing more factories to cater customers on outskirts places. Local Farms on the other hand will help produce more raw materials and will result to reduce their cost and improve profit.

V. CONCLUSIONS
On the alternative course of action given, research and development stands as the highest ranked amongst the alternatives. Investing with Research and
Development will guide Nestle to bring innovations and renovations of product that will give them a competitive advantage over other foreign and domestic rivals. As they encounter a high level of competition especially in the globally challenged environment. Any increase in the competitive environment may have an unfavorable effect in their business, earnings and growth. Through competitive intelligence, the company gain insight needed to create a competitive advantage and come up with strategic decisions on how to compete against their rivals to maintain their position as the number one producer of food products. VI. CHANGE MANAGEMENT

Once Nestle exercise the concluded option, they will able to deliver product that would create value and appeal to their consumers. Renovation of existing product will keep their pace in the industry and will help them meet consumers’ expectations. Innovation of products on the other hand will help them maintain their position in the market. They will able to reach and go beyond what the consumers expect about the product. Through continuous renovations and innovations they will able to rise and compete in a globally challenge environment. VII. RECOMMENDATIONS:

Monitoring and evaluating their products and market continuously gives Nestle a clear vision of their market position and it will help them to shape a proper competition to take advantage over their competitors and also to set up a better brand image. Nestle can improve its profit margin further by establishing their own retail outlets, thus, ensure availability of products to the hand reach of the customers. On the other hand, the cost of raw materials has been on a rise over the past few years which have caused an increase in the production costs. Local farms that will produce their raw materials will reduce their cost and hence, improve their profit. 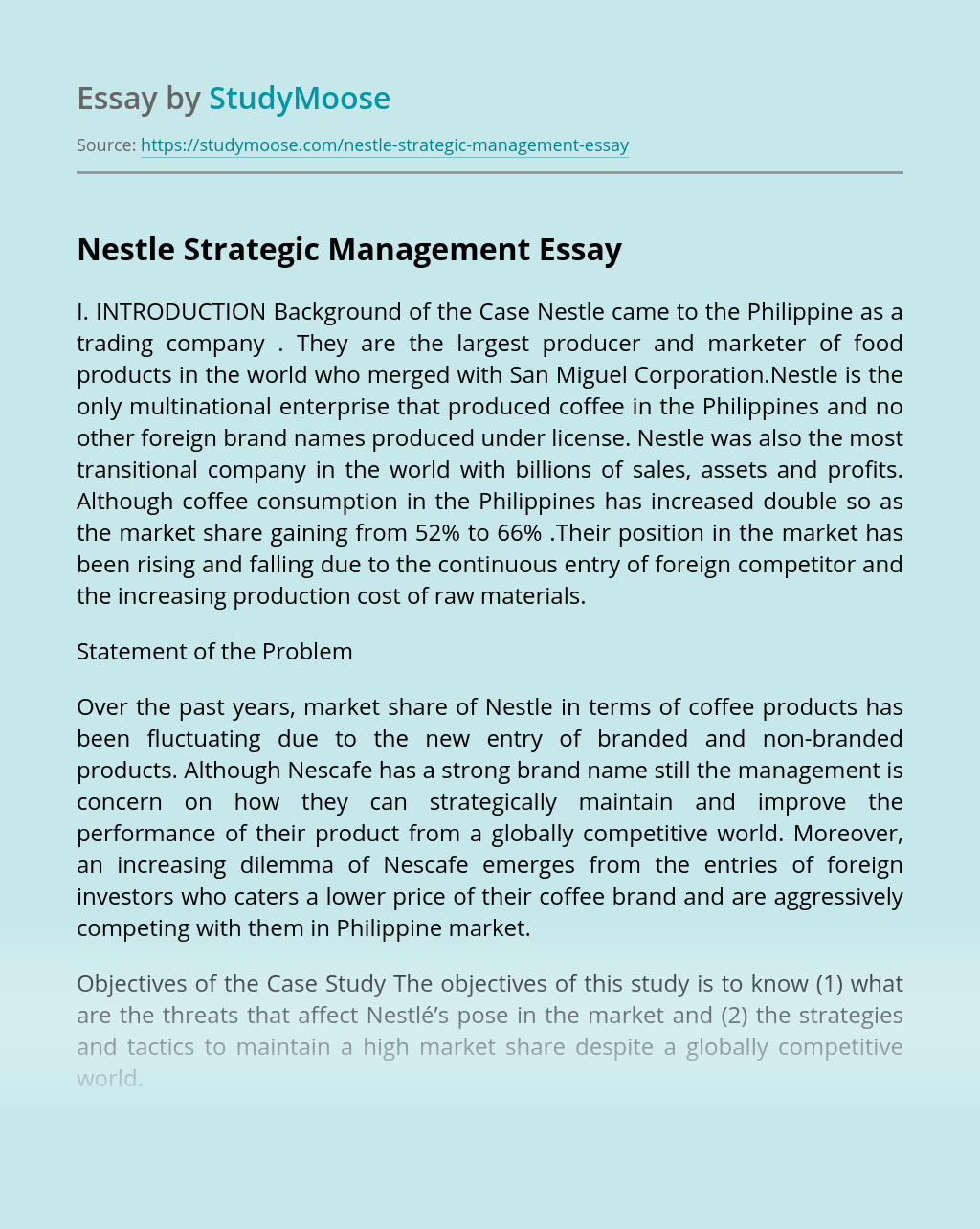 Turn in your highest-quality paper
Get a qualified writer to help you with
“ Nestle Strategic Management ”
Get high-quality paper
Helping students since 2015
Stay Safe, Stay Original