The Positive Effects of the Green Revolution

Don't use plagiarized sources. Get your custom essay on
“ The Positive Effects of the Green Revolution ”
Get custom paper
NEW! smart matching with writer

The most significant benefit of the Green Revolution was that there was higher yield and an increase in food production.

The development of high yield varieties

The development of high yield varieties meant that only a few species of crops, such as rice, had to be grown. In India, for example, there were about 30,000 rice varieties prior to the Green Revolution, as compared to today where there are only ten, which are the most productive types of rice.

With these selected types of rice, farmers could produce more crops within a shorter period of time and earn more money, which then lead to a better standard of living. In addition, cereal production more than doubled in developing nations between the years 1961–1985. Yields of rice, maize, and wheat increased steadily during that period.

The production increases can be attributed equally to irrigation, fertilizer, and seed development, some of which might have disease-fighting capabilities which help to increase its lifespan and thus the profit of the farmer.

With higher yield and increased food production around the year, farmers earned more profit from the crops they harvested which allowed them to buy more food supplies. This increased their wealth and also helped to lessen the extent of their hunger problems. On the other hand, there have been some issues with high yield varieties that have been produced during the period of the Green Revolution.

The mono-cropping of high yield varieties

The mono-cropping of high yield varieties increased the susceptibility of rice crops to pests and diseases. This posed a threat to the growth and survival of the crops and lead to the harmful solution of using more pesticides, which has a negative impact on the environment. Lastly, “super pests” might develop over time, which adapt to become resistant to pesticides after long periods of exposure to pesticides on crops.

The solution to this problem would again be to increase the dosage of pesticides used on crops, which would further harm the environment. Most importantly, the increased use of pesticides would cause people to spend ore money on such solutions, thus causing a decrease in their wealth and preventing poverty from being solved. Economic problems also came about due to the Green Revolution. Since more advanced technology and equipment was used during the period of the Green Revolution, the cost of production rose.

Thus, only some people were able to afford and benefit from these techniques. This then led to social problems such as a large income gap or rich-poor division in some countries, where only farmers who were wealthy enough could utilise the advanced technology to produce better crops faster in order to gain wealth.

Farmers who were initially wealthier than the others became even wealthier, thus widening the income gap amongst them and leaving poverty as a remaining issue. This scenario was clearly seen in the case of Africa, which is a poor third-world country. Even though there had been numerous attempts to introduce the successful concepts from the Mexican and Indian projects into Africa, these programs were generally less successful, as there was widespread corruption, a lack of infrastructure and a lack of will on the part of the government in Africa.

Environmental factors, such as the availability of water for irrigation, diversity in slope and soil types also contributed towards this phenomenon. From these examples, it is clear that only some countries benefitted from the Green Revolution and hunger was only reduced to a minute extent in certain countries. Lastly, with technological advancements, improved farming techniques came about which led to self-sufficiency in food production. Previously, farmers in some countries were only able to grow and harvest crops at a certain time of the year or once every few years, thus making their income source unreliable and unsustainable.

With the technology from the Green Revolution, farmers could then produce crops all year round, which brought about many social benefits. With a stable and predictable source of income, the standard of living of farmers would greatly be increased due to a higher degree of wealth and material comfort available to them. They would then be able to afford better housing, while daily necessities such as food and water would no longer be their primary concern. As their standard of living increased gradually, the farmers no longer suffered from hunger and the rate of poverty decreased.

The Positive Effects of the Green Revolution. (2020, Jun 02). Retrieved from http://studymoose.com/positive-effects-green-revolution-new-essay 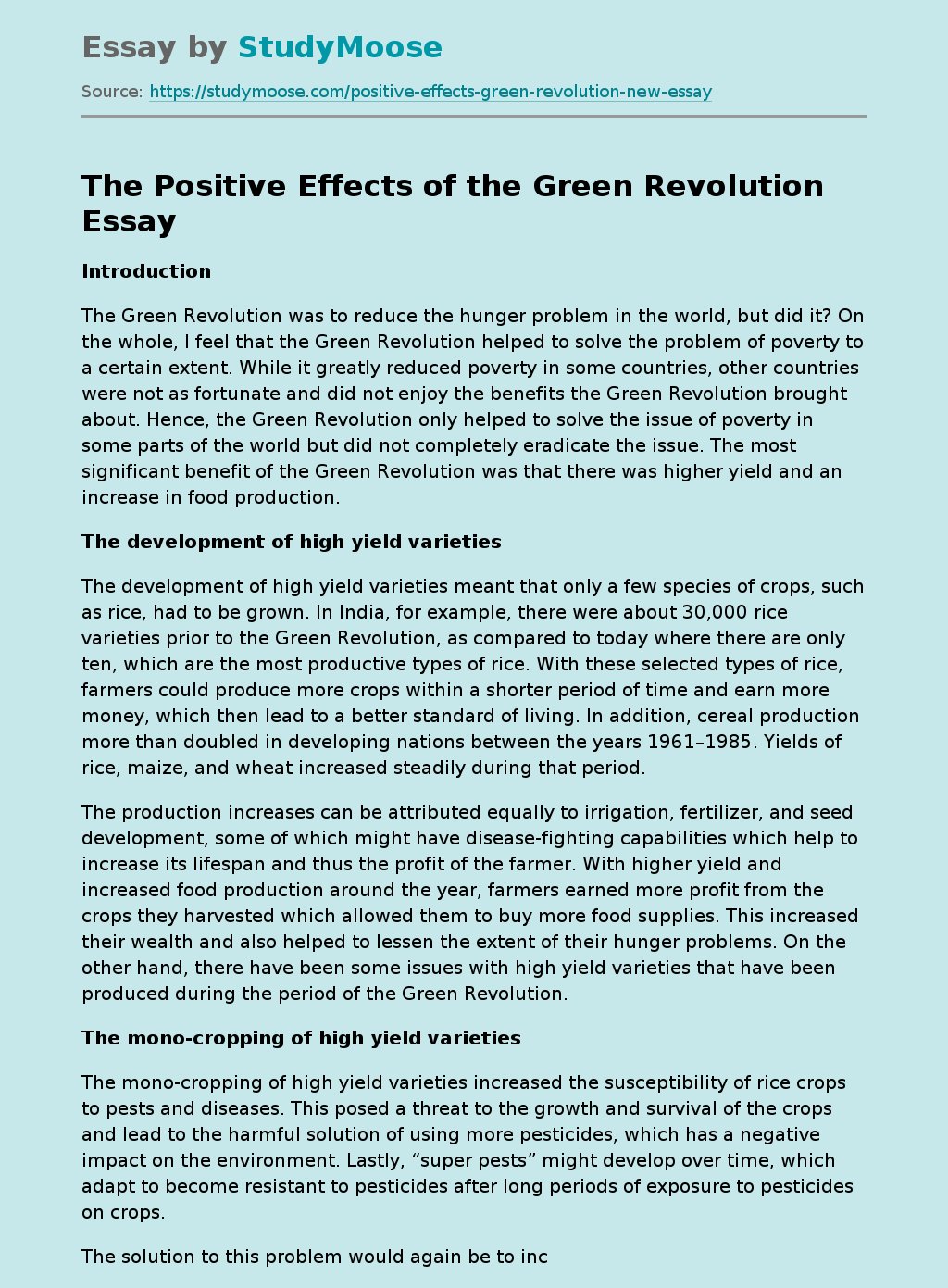