Ripley, in contrast, is calm, commanding, and focused. In Aliens, Ripley still has all the strong character traits seen in the first movie, but this time we are introduced to her maternal nature when she lovingly cares for the sole survivor of colony, a young little girl named Newt. We see Ripley’s maternal nature through her caring and protection of Newt, especially in the end when Newt is captured and Ripley must venture deep into the alien nest alone to rescue her.

Don't use plagiarized sources. Get your custom essay on
“ Popular culture is sending mixed messages ”
Get custom paper
NEW! smart matching with writer

Steven Soderbergh’s Erin Brockovich is based on the true story of, you guessed it, Erin Brockovich, a mother fighting to make ends meet and while doing so, brings down a large corporation and brings justice to the victimized community.

The film stars Julia Roberts who is accustomed to playing women who are crazy, confused, and weak. In this role however, she does play someone who is physically sexual, but is also brash, has an attitude and colourful vocabulary.

She is also deeply struggling to survive and provide for her three children. Despite her shortcomings, Erin is also endearing, caring, and decent. Through her investigation as a secretary in a law firm, she finds out that the large corporation of Pacific Gas & Electric has been dumping chemicals into water sources that have killed many people in the surrounding community.

She stands up and fights against this company and in the end brings forth some justice for the afflicted families. Erin epitomizes the cliche of “don’t judge a book by its cover.

” Even through she dresses like a white-trash prostitute, has little education, and a vocabulary of a sailor with Tourette’s, she is a miracle worker in the lives of those she helped, she was able to, in one of the taglines of the film, bring a small town to its feet and a huge company to its knees.

The film realizes the conflicts of modern independent women, who may be uneducated, unqualified, a single parent, or in a word struggling, and sheds some light giving a message that with personal committment one can achieve unthinkable goals even when all the odds are stacked up against you. In the Alien films, Ripley too is fighting against a large corporation, referred to as “The Company. ” With the discovery of the alien creature, The Company wants its capture for study, and everything else is expendible. The idea in all the films of these women fighting against these giant malevolent companies has very strong feminist overtones.

In Aliens, The Company is represented by the company man Burke, and when Ripley finds out his true motives, she responds: “I don’t know which species is worse. You don’t see them (aliens) fucking each other over for a goddamn percentage. ” Capitalism, an ideal created by “man” may be represented by these evil corporations, and it is through the female characters that we see their greed and ignorance, and it takes a woman’s touch to stop them, whether it may be through a nuclear bomb or cleavage and charm. In the films Alien, Aliens, and Erin Brockovich, there is a noticeable play on role-reversal.

The character of Ripley emerges as an action hero, while the men of the crew or marines are laid to waste by the aliens. In Erin Brockovich, there is also a form of role-reversal. The Roberts’ character must go off to work (fighting the company of PG&E), while the next door neighbour, a rough-looking biker, a man’s man (whom we find to be a nurturing and caring person with a heart of gold), is left to tend to the children. This play on role-reversal uses the typical stereotypes of both genders and gives them to the character of the opposite sex.

This “new” view is not ridiculous, men can be caring and vulnerable while women strong and independent, and through perverting these stereotypes onscreen and bringing forth a not-so-common identity of gender into reality, equality is emerging with another step. In the past 30 years the direction of women in film are many. Some adhere to the past notions such as the victim, the femme fatale, the reward or the sidekick. With the starting of the female movement some films have taken the direction of creating a new identity for the female character, creating an image that we are used to, but given to a gender that we are not used to seeing with.

Through using women as the protagonist and shunning the stereotypes normally affiliated with women, such movies as Alien, Aliens, and Erin Brockovich create a new identity for the viewer to respond to, possibly helping the notion of feminism – equality. Hopefully, more films dealing with this issue will continue, maybe a possible mix between the Ripley and Erin character can actually boost this ideal further, oh wait… we already have that in Lara Croft Tomb Raider, and I don’t think it boosted anything except the sex drive of young adolescent males. 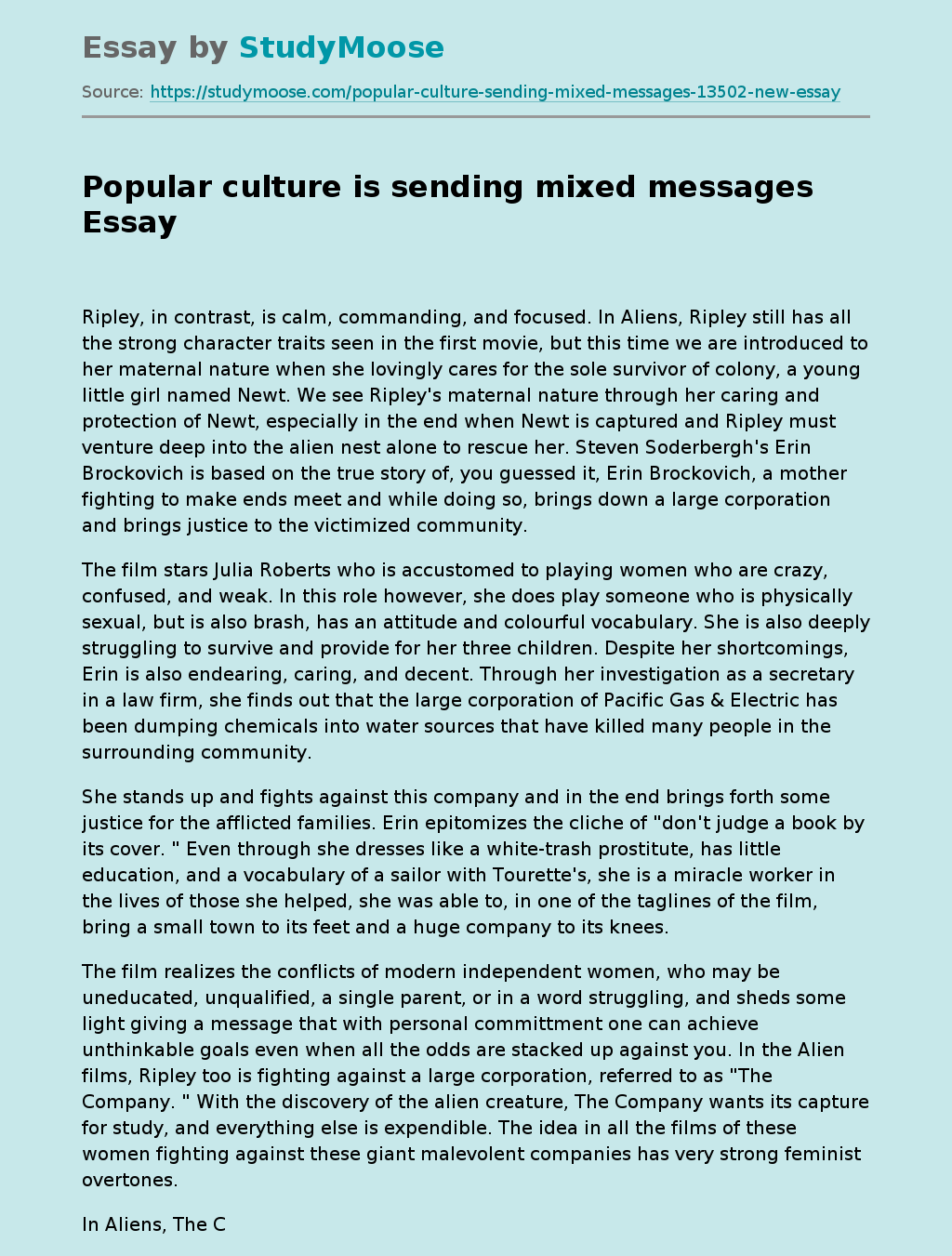