Police Corruption can be defined as a form of police misconduct in which law enforcement officers break their social contract and abuse their power for personal or department gain. There are three forms of police corruption. These forms are Nonfeasance, which involves failure to perform legal duty, another form is Misfeasance, which is failure to perform legal duty in a proper manner, and the third form is Malfeasance, which is commission of an illegal act. The three explanations of corruption are the “rotten apples”, “departmental”, and the other focuses on factors external to the department.

Turn in your highest-quality paper
Get a qualified writer to help you with
“ Police Corruption Essay ”
Get high-quality paper
NEW! AI matching with writers

An example of these would be an officer might feel unappreciated for their good work and actions and it might make them corruptible.

An example of departmental explanation would be if officers feel uncommitted and unsupported, their outlooks and values are reinforced by others in the group which may lead to lack of commitment in their job, thereby leading to corruption. Some police officers may abuse their power because they see themselves as not enforcers of the law, but them as the law itself.

The “blue wall of silence” is a term used in the United States to denote the unwritten rule that exists among officers, where they should not report on a colleague’s misconduct, errors, or crimes. This may impact an officer’s loyalty to their profession because they are not doing their job if they are letting another officer get away with crimes, and if they did report it then they would be breaking their loyalty to fellow cops.

It’s important for officers to have a good ethical foundation before they enter into this job because it would help prevent them from doing wrong and abusing their power.

In the “Stopped for Being a Mutt” video, I realized how bad some officers can act sometimes. The teen was stopped and questioned multiple times for looking suspicious, when really they were just racist. They were trying to provoke the teenager to justify an arrest. I feel the form of police corruption they were doing was misfeasance. Stopping someone because of their race, when they weren’t committing any crimes is humiliating to that person and is wrong of any cop to abuse their power in this way. The “Blue wall of silence” comes up in this type of situation because some other cops witness it and knows that this goes on when officers have low numbers of stops, and they don’t want to tell because they don’t want to seem disloyal to their fellow police officers.

In the “Los Angeles Police Department” video, they talked about the Rampart and Crash scandal. When I watched this video I was in disbelief that, that many officers were implicated in some form of misconduct. I understand that they wanted to get gangs and crimes off the street but this was no way of going about it. They would shoot or beat people when they were unprovoked. They would steal narcotics and plant false evidence, and frame suspects and cover up all that these officers were doing because it was getting rid of the gangs and “hoodlums”. I can’t understand how these officers didn’t think what they were doing was wrong and immoral. This form of corruption in this particular situation was malfeasance. What they were doing was illegal, and they are here to protect and obey the law.

In the “Behind the Blue Wall” video. I was extremely shocked to see the police brutality that occurred in these cases. I don’t understand how an officer could deliberately torment a victim because of their race and think they can get away with what they’re doing and that it isn’t wrong. Malfeasance is the form of corruption that comes up in these cases because what they are doing is illegal. The unlawful beatings and shootings of these victims, when they are not provoking the officers; is completely wrong and these cases need to stop. The Blue wall of silence also comes up in these cases because there were officers who knew about what happened and what the other officers were doing and instead of reporting it, they attempted to cover it up.

Co-workers should treat those who inform authorities of illegal activity in the police agency the same as how they treated them before they reported corruption. In the virtue ethics perspective, the habit of right desire, he was making the right choice by reporting corruption because he knew that what was going on in the agency wasn’t right and needed to be stopped. Frank Serpico’s response to this case was “It’s always worth it to be at peace with yourself.” I think this does imply reasoning of ethical thought. I think Serpico meant that, as long as you feel good with what you are doing, and you are doing what you think is right, then that is all the matters.

I agree with this because no matter what happens in the end, it is all worth it if you are at peace and happy with what you did. There are conflicts presented in terms of loyalty and duty. Loyalty is a good to have, but it is not a virtue. If loyalty is treated as a virtue, it can be misguided. It will lead to protection of illegal conduct and can turn into corruption. Officers may want to be loyal to fellow officers and not report what is really going on, however they also want to do their duty, and want to report because it is their duty to not participate in the corruption.

The blue wall of silence impacts conflicting loyalty because it is an unwritten rule amongst officers to not report a fellow officer’s mistakes, misconducts, or crimes. This affects them if they want to be loyal to those officers and be loyal to their civic duty as well. If I was an officer in this situation, I would definitely report these crimes. I don’t believe in the blue wall of silence. I think that if an officer is doing something illegal then it needs to be reported and dealt with. Just because they are officers doesn’t mean they should be able to get away with things that they are arresting other citizens for doing. 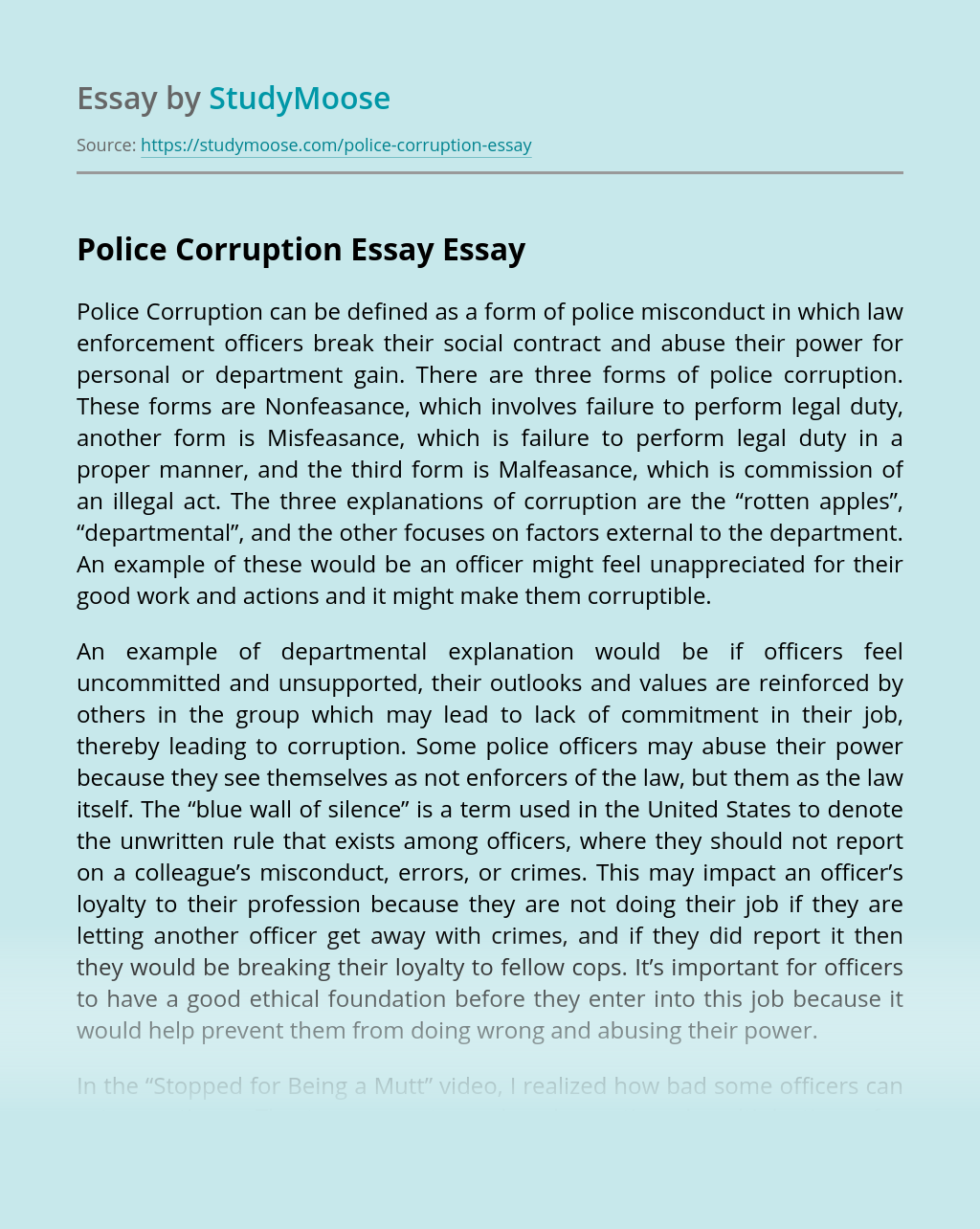 Turn in your highest-quality paper
Get a qualified writer to help you with
“ Police Corruption Essay ”
Get high-quality paper
Helping students since 2015
Stay Safe, Stay Original