Police Brutality was never really the main issue but within the last few years, it has brought itself into attention. According to Google, Police Brutality is “one of several forms of police misconduct which involves undue violence by police members”.

We have seen, read, and heard many cases of police brutality it is always the same stories, different names. This type of cases are becoming more common and no one seems to be doing anything in order to stop this. It is not fair for an innocent person to die due to the quick judgment of an officer.

Don't use plagiarized sources. Get your custom essay on
“ Police Brutality ”
Get custom paper
NEW! smart matching with writer

When one thinks of a cop the first thing that should come to mind is “hero”. Law enforcement officers swear an oath, “to protect and serve the citizens they represent.” A representation of peace, power, justice, safety and much more. Although, a few years ago it was that way it is no longer true. But as time goes on people tend to want to avoid cops and hide from them.

People are now not only frightened of cops but can’t seem to give them the trust they deserve. Cops are now assaulting, abusing and killing innocent people and these type of incidents are becoming more frequent. People are now terrified to be pulled over by a cop because they feel as if their life is at risk, it doesn’t even have to be dark outside for them to be scared.

There’s plenty of cases of innocent unarmed victims being killed by cops.

Are cops abusing their power? Police fatally shot 987 people last year or two dozen more than they killed in 2016, according to an ongoing Washington Post database project that tracks the fatal shootings. Cops have been judging unarmed and innocent citizens way too quickly and those numbers seem to be increasing with frequency unless someone speaks up.

Cops seem to be targeting blacks more than anyone. In our American history, they have been poorly treated and been through these kinds of issues. Police brutality didn’t really start out of nowhere because this type of issue has been going on for decades.

For example, Slavery, Jim crow laws, The Greensboro sit-in, Rosa Parks, The Case of Emmett Till, Little Rock Nine, M.L.K., Malcolm X, and the list goes on and on. Police Brutality is another part of Discrimination. The Emancipation of Proclamation made all people held as slaves in the rebellious ( Southern) states become free, but division and racism between races did not end there.

Throughout the years we’ve been taught that anyone who kills is in the wrong, especially when killing innocent people. I myself have been taught that one should not kill under any circumstances. According to the article “PRO/CON: ARE POLICE GOING TOO FAR?” by Rachel Raasch says, “Unjustifiably taking the life of an innocent victim is not simply a “mistake.”

You can fix a mistake; you cannot bring someone back from the dead. When one individual is beaten or shot in the street by another citizen, people recognize that as wrong.” This quote raises plenty of questions. For example, Why should the uniform of the attacker cause confusion?

Does this mean that just because we wear a badge we can shoot freely? Does this mean we should jump into conclusions before pulling the trigger? Why does our way of thinking change when we see a colored person behind the wheel? All these questions will never have a right answer and we will never know why these things keep happening but instead of staying quiet and trying to come up with an answer we can fight back by raising our voices and being heard. 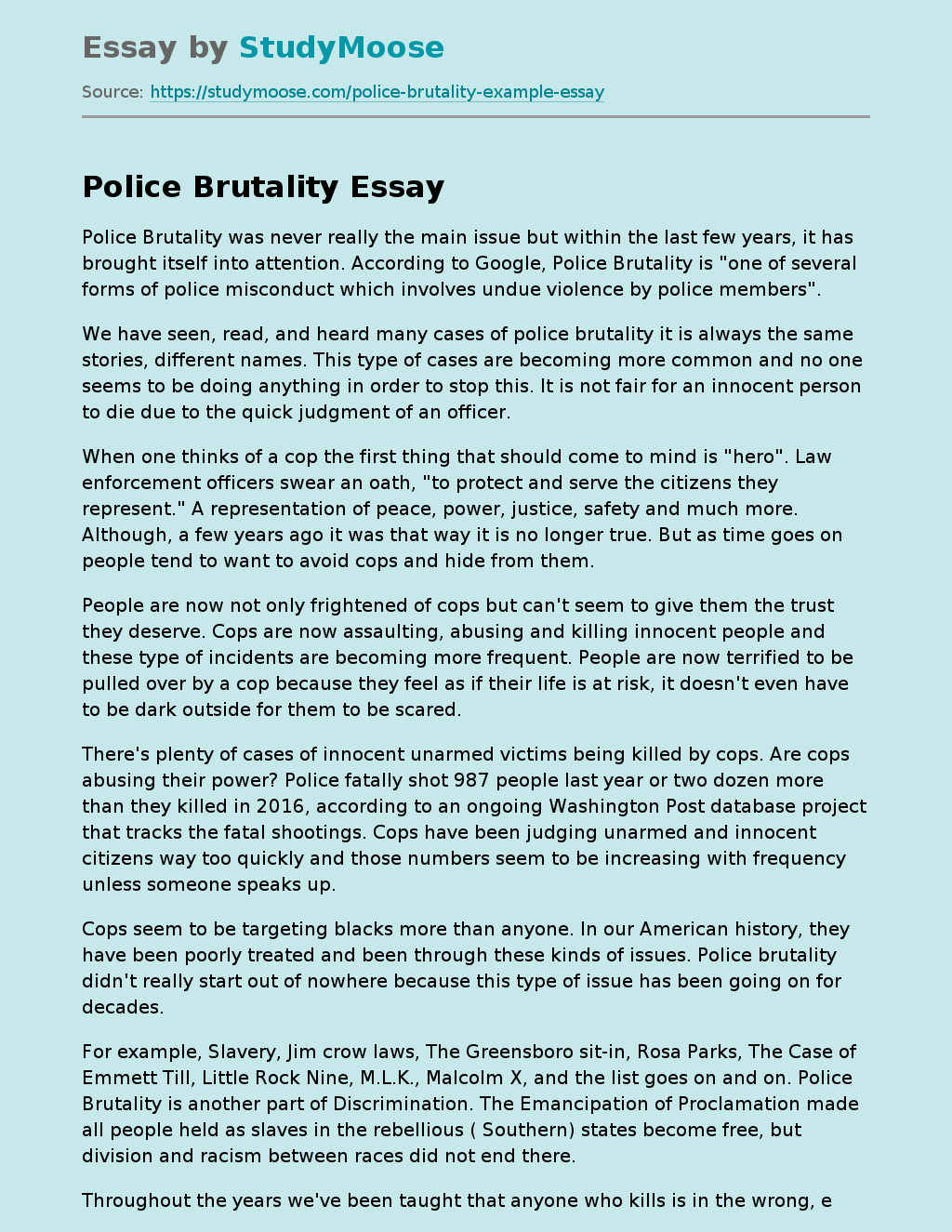