Have you ever feared the possibility of police brutality because

Have you ever feared the possibility of police brutality because your skin tone happens to be black? Police were once known to be the peacekeepers, but it seems that law enforcement have been abusing that exact power. In America, police brutality has been used to suppress black people for years to preserve their power over them. Black people have endured all kinds of violence that result in assaults, beatings and even shootings that end up taking someone’s life. Police brutality has never been a new issue and it continues to expand causing violation of a person’s human/civil rights.

Don't use plagiarized sources. Get your custom essay on
“ Have you ever feared the possibility of police brutality because ”
Get custom paper
NEW! smart matching with writer

Yet it never seems to be acts of crimes happening, but a tactic to stop someone because of the color of their skin. This is a form of legalized prejudice and it begins to cause a mistrust for african american people when it comes to looking for help from police.

Police brutality can be seen as a physical process of arresting someone and always ends up with inflicting scars, marks or bruises on the victim from the encounter.

African Americans aren’t seen as individuals, but as thugs/criminals because of the color of their skin and that makes them a target. In the article of ‘Police Don’t Like Black People’ a black youth describe his encounter he have had with police. Travis explained how an undercover officer who incorrectly believed he was concealing drugs choked him in an attempt to obtain the requisite evidence: I was standing on the corner and we got these police we call the jump out boys.

They the police that be riding them regular cars and look like regular people. They like “what you doing on this corner?” And I’m just steady talking to ’em and they thought I had some dope in my mouth. So this one cop grabbed me and just started squeezing my throat. I was coughing and spitting up stuff and I’m like “what you all doing this for?” and they kept on like “don’t swallow it son.” I’m like “swallow, I ain’t got no dope!” I opened up my mouth after they let go. I was showing them and everything. This type of action taken by police just to find drugs was unnecessary and there was no need to physical harm this person because of a belief of concealed drugs that was never there. African Americans are put into situations that end violent that are mostly the use of excessive force from the officer. In the article of ‘Police Don’t Like Black People’ another black youth describes what he witnessed from officers. Doug explained: I saw my uncle [get beat up by the police]. They said he had a gun, but they didn’t find no gun so they couldn’t say that. Then they said he was resisting arrest so they beat him up and stuff like that. But I ain’t see no resisting arrest [especially] when they have the cuffs on you, you can ‘t resist no more. Then they maced him, and I felt like how is he resisting now? Only thing he trying to do is get that [mace] out his eyes. And then I still saw them hitting him with clubs and stuff. This gives a glimpse of that abuse of power that police have and the exceeding of their limits of violence when involving themselves in a situation. Police brutality isn’t just a problem, but a inflicting issue that needs to be fixed.

Police brutality does not just show a glimpse of the harm an officer puts a victim through, but how far they go to do harm. The actions of police brutality is no different from the steps taken in slavery towards African Americans. In the article, ‘ the murder of unarmed blacks carries forward and solidifies the racist legacy of citizen slave patrols that were initiated during slavery. Even though castrations, whippings, maimings, and lynchings were frequently used in the South as a method of policing the activities of African American men from 1880-1950, the transition of these activities to murder by guns is no less precarious. So, regardless of whether these organizations are referred to as ‘citizen slave patrols’ or ‘police/law enforcement’, a societal disdain for African Americans creates a desensitization to black suffering and death. History doesn’t change no matter the change of roles and names. There is still a sense of power in which the title a police officer has and the gun that comes with it. African American are not perceived as people when the trigger is pulled. A blatant example of the ‘Black man as dangerous and sub-human’ narrative was offered by Officer Darren Wilson, who when he was allegedly assaulted by the late Michael Brown publicly proclaimed that ‘He looked like a demon.’ Furthermore, the word ‘demon’ is not only a painful and erroneous characterization of blackness that has remained stable over time, but is a flagrant societal reminder that blackness needs to be stopped, regardless of the cost. In this context, the black man is triply dangerous because of his dangerous mindset, his enormous size, and his race, which is inferior to whites. In other words, white supremacy is sustained when whites embrace the belief that black men are a menace to society and that society needs to be protected from these men via murder. Police brutality itself is a way to put down African Americans as if their animals when they are people too.

As a result of my research, I have come to understand that police brutality is an issue that is greatly impacting the African American. African Americans do not trust the police because police officers target them even when they are not doing anything wrong. The police have the law on their side and can just take someone life and get awarded for it. Police brutality is causing officers to get away with murder and hardly ever lose their jobs. Police officers need to build a relationship with the community and not just try to tear it apart. Police officers should be held just as responsible as any other person in the country for committing a murder or shooting someone. Police brutality has caused so much sadness, hatred and tons of death. But it needs to stop before it gets worse before it even gets better.

Have you ever feared the possibility of police brutality because. (2019, Dec 16). Retrieved from https://studymoose.com/have-you-ever-feared-the-possibility-of-police-brutality-because-example-essay 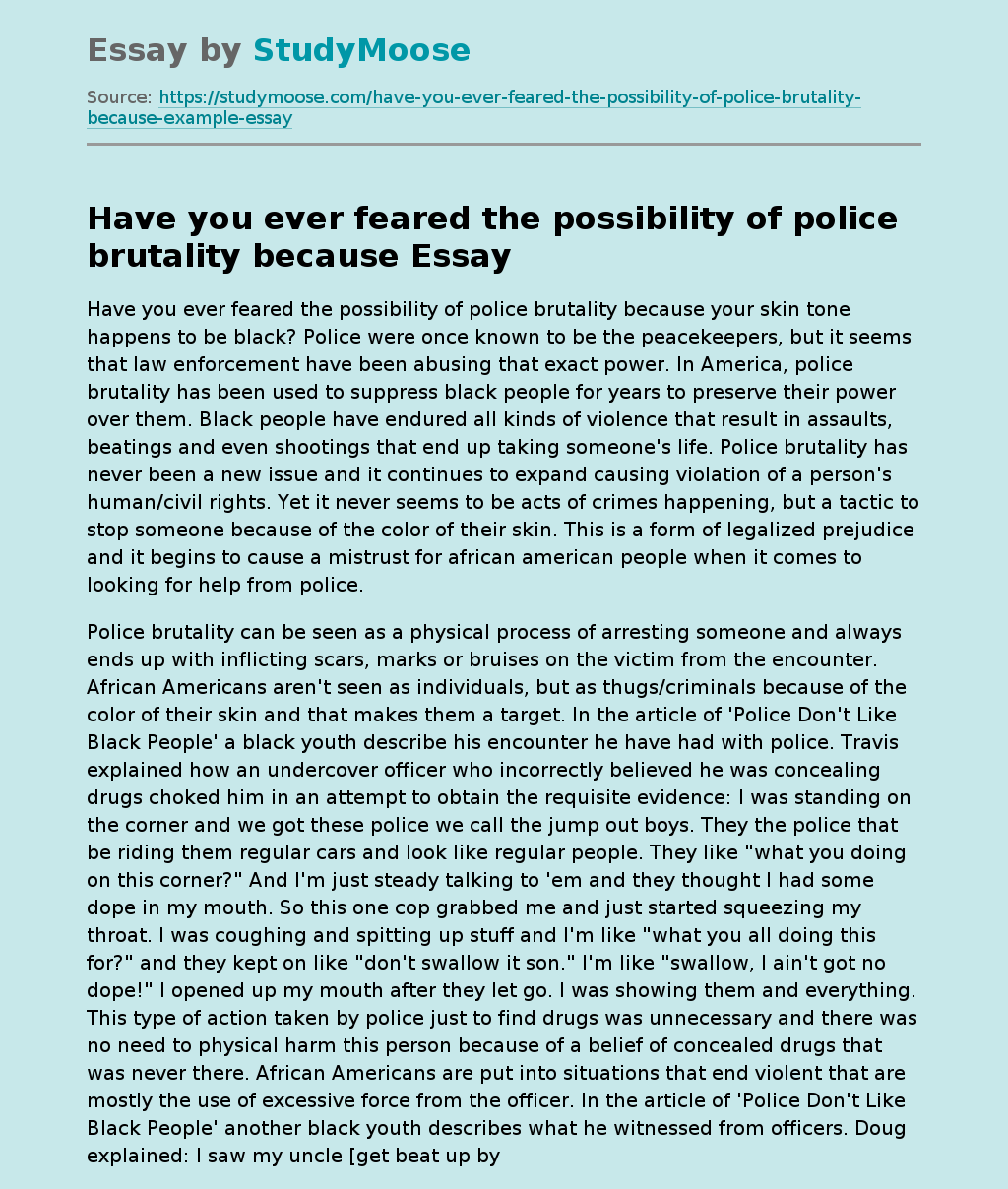