How do the poets present people in Vultures and one other poem?

In the Vultures, Chinua Achebe presents a rather pessimistic view of mankind. He presents the reader with an ambiguous conclusion about the nature of people. He suggests that in even the most evil ‘ogre’ can love exist, or that love can only exist in people, in the presence of eternal evil.

The main way that Achebe presents people, is the language he uses to describe the vultures. In fact, the vultures may be a metaphor for all people. The reader is bombarded with gruesome language, and the poet’s diction is very negative.

Don't use plagiarized sources. Get your custom essay on
“ How do the poets present people in Vultures and one other poem? ”
Get custom paper
NEW! smart matching with writer

He writes of the depressing ‘drizzle’, the vultures perching on a ‘broken bone of a dead tree’. He intertwines these depressing phrases with the revolting –, how the vultures ‘picked the eyes’ of a ‘swollen corpse’. Yet he marvels at the seemingly misplaced show of love, as the male ‘inclined affectionately’ to the other vulture. In a sense Achebe uses language in this poem to suppress that even the most obviously repulsive people can show love.

Similarly, Lawrence Ferlinghtti uses language in ‘Two scavengers in a truck, two beautiful people in a Mercedes’ to present people. However the difference here is that the language is used, not to repulse us, but to contrast the two couples we are shown. The contrast between the ‘grungy scavengers’ and the ‘cool’ couple is shown throughout the poem. While the man is ‘hip’ has long ‘blond hair’ and is a rich architect, the older scavenger is a ‘hunched back’ with grey iron hair’, looking like ‘Quasimodo’.

Both poets use language to present people, but in different ways.

Both poets use irony to present people. Achebe describes how the commandant in Belsen has ‘human rough clinging to his nostrils’! This suggests obviously the evil he has done, but also suggests eating the unspeakable. Ironically, although we are repulsed by the juxtaposition of human and rough, we see the love he shows in buying his children chocolate to eat. Through this use of irony, Achebe is showing us how, in people, seemingly opposite sides to our character are linked.

Similarly, in Ferlinghetti’s poem, there is a strong tone of irony which is very effective. They differ in this as Achebe uses irony to suggest the opposite sides of our nature, Ferlinghetti uses irony to suggest that in fact the stereotypical views people have on other people in some cases are wrong. In the first stanza, Ferlinghetti writes how the garbage men are ‘hanging on’ yet ‘looking down’ on the ‘elegant couple’. There is irony in that these people are hanging on the bottom rung of society, yet may be morally superior. After all, society would crumble if there were not people prepared to clean up its rubbish.

Both poems also use imagery to present people. In Vultures in the final stanza, ` Achebe conveys to the reader the conventional view of warmth and love in a cold heart. He presents a striking image that at first seems to rejoice in the fact that even the most evil ‘ogre’ can show some glimpse of love. However, Achebe also suggests that it is this tiny glimpse of love that allows evil to continue in people.

Lawrence Ferlinghetti also uses imagery to present people in ‘Two scavengers in a truck, two beautiful people in a Mercedes’. Perhaps the best example of this is the phrase an Odourless T.V. ad in which anything is always possible! This image suggests that this view people have, that people are all equal, is as false as a T.V. ad. The scavengers in the truck will never rise to the position of the elegant couple.

Perhaps the biggest difference between the ways people are presented in these two poems is the use of structure and form. ‘Vultures’ is written in three clear sections, and each section presents people in a different way. In the first, vultures are used as a metaphor to present all people, in the second Achebe presents the reader with a human equivalent and in the third section Achebe presents the ambiguous conclusion about people.

However, in ‘Two scaremongers in a truck, two beautiful people in a Mercedes’ the structure is more for the (image?) than the car. He uses the varied structure to reinforce the point he is making about people. This is a very effective way to present people. For example, lines 31-34 (and the very red light….. between them) are set out to reinforce the point that the idea people are equal is false. ‘Between them’ is set apart to suggest that there is in fact a huge gap between the two sets of people, and all types of people, that cannot be crossed.

In conclusion, both poems present people in different ways. Lawrence Frelinghetti presents the reader with the unavoidable conclusion that social and class divides between people simply cannot be crossed. Chinua Achebe presents the reader with an ambiguous conclusion that in all people, there is lodged will. Both poets use language, in particular, irony, imagery and structure and form in differing ways to present people. In my opinion, Chinua Achebe’s presentation of people is more effective. However I feel that the anthropomorphic view of the vultures may be false. Do vultures really feel love?

How do the poets present people in Vultures and one other poem?. (2020, Jun 02). Retrieved from http://studymoose.com/poets-present-people-vultures-one-poem-new-essay 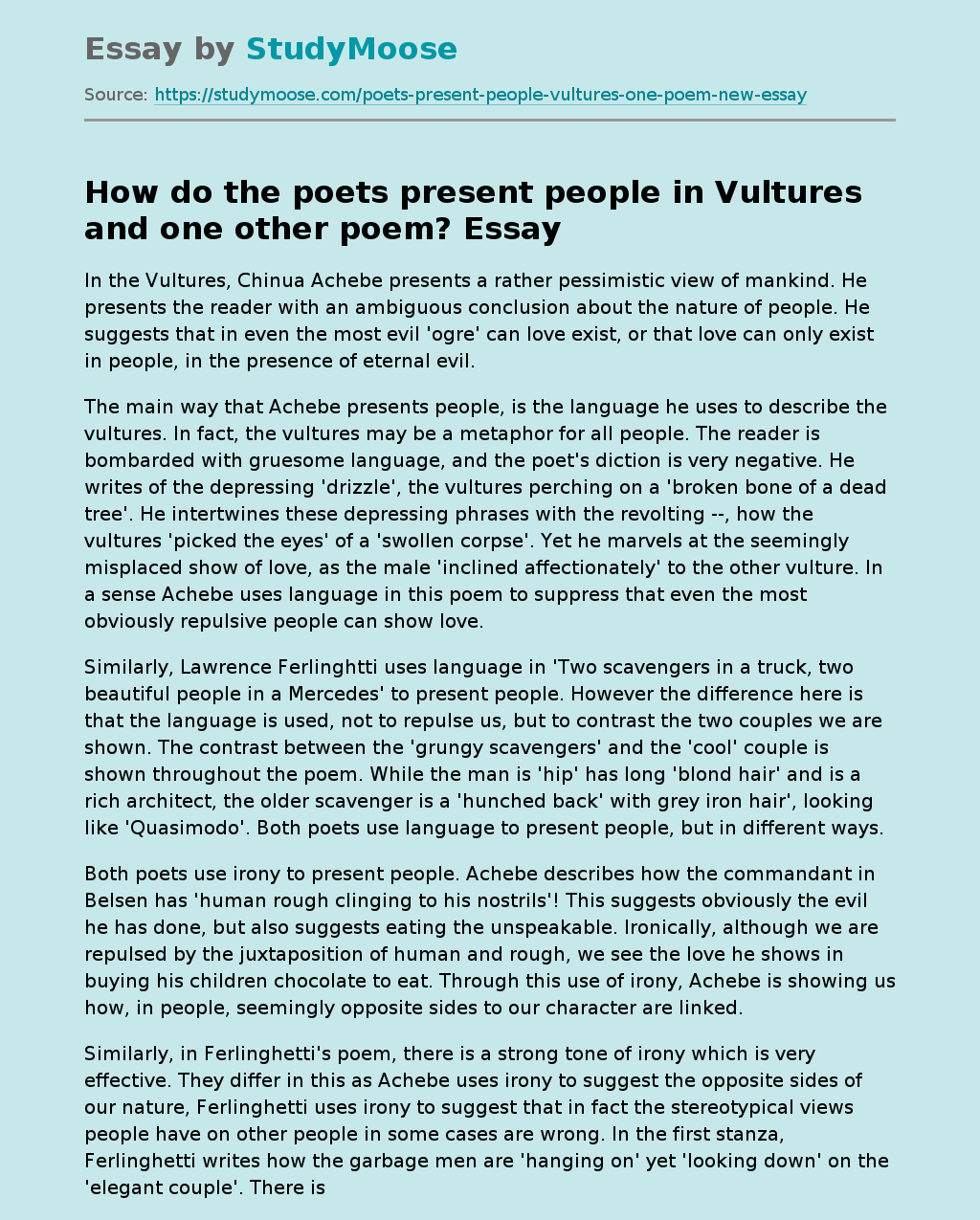