Poetry and Melancholy in Sheers Examination

“Beneath the lyrical and pastoral influences on Welsh Border literature lies a deeply elegiac, even tragic note.” Compare and contrast the different ways in which two of your chosen texts present poetry and melancholy in their examination of Welsh Identity. The borderland represents much to those that live there. It is a geographical, geological and linguistic border, plunging the entire area into a limbo of confused identity; twilight poised between the lyrical dreams of magic and myth, and the overcast, oppressive reality.

Don't use plagiarized sources. Get your custom essay on
“ Poetry and Melancholy in Sheers Examination ”
Get custom paper
NEW! smart matching with writer

Therefore the Welsh border literature is influenced lyrically due to the rich oral tradition of the cyfarwydd carrying stories rooted in Celtic mythology from village to village.

The collection of poems in Skirrid Hill by Owen Sheers is evident of lyricism, as the natural rhythms seem to capture the storytelling skill of the bardd. The pastoral influences stem from the intimacy and dependence that Welsh people living on the border show to the land, represented by the huge amount of agriculture and mining that took place in the 19th and 20th centuries.

This is shown in Resistance, also by Owen Sheers, as the writer presents poetry in such a way that people and the landscape become inseparably interdependent. However, these lyrical and pastoral influences must always be intertwined with a tragic note, since reliance on things such as the mining industry have resulted in a scarring of both the land and the people. Resistance and Skirrid Hill reflect not only the aforementioned influences, but also the elegiac note of death, deterioration and disillusionment.

Resistance tells the story of farm women in a remote Welsh valley, abandoned by their husbands, forced to toil the unforgiving land in order to survive. This isolation is perforated by an invading German patrol, who must remain in the Olchon valley so that they too can survive, or at least revive. Upon realising their interdependence during the harsh winter of 1945, the two groups form a ‘fragile harmony,’ in the words of Owen Sheers. Sheers himself has a love for nature, and his idyllic vision is that of rurality. Like many Welsh writers before him, he presents the borderland landscape (in particular the Olchon valley) as ‘bluntly beautiful,’ in the words of Albrecht, the leader of the German patrol.

The word ‘bluntly’ is evident of the power of nature, and the reverence that Sheers shows towards the land. This ambiguous relationship towards the landscape is the reason why Sheers chose to place the novel in the Olchon valley; ‘the horseshoe shape…and steep escarpments which are very beautiful with a sense of protection, but are also strangely threatening.’ This ‘protection’ is captured by Sheers, as the patrol is able to take refuge in the valley, and recover from the dehumanisation of war. This clearly shows the pastoral influences on Welsh border literature, as humans are shown to return to nature, searching for an earlier, simpler way of doing things.

This same intimacy is replicated in many poems throughout Skirrid Hill. Both Y Gaer and Hill Fort are about a father who seeks consolation for the death of his son in the landscape. ‘And that’s why he’s come back again… Not just to make the circle complete, To heal or mend, But because he knows these walls… Protect as much as they defend.’

The enjambment, as externalised by the metaphor of the ‘circle,’ and the easy rhyme creates what poetryarchive.org calls a ‘quiet naturalism,’ again showing the lyrical influences on Welsh border literature. The land here, like in Resistance, is shown to ‘protect’ the vulnerable individual from the horrors of the outside world. More importantly, the landscape is presented as something which can ‘heal or mend.’ This is significant as Albrecht searches for just that, ‘just as the air purged his lungs so the views purged his sight…He knew it was the valley that…might just unlock him altogether.’ The word ‘purged’ has religious connotations with the purging of sins, thus the land is conveyed as the salvation for the bereaved and the condemned alike.

However, these lyrical and pastoral influences, which appear to build an Arcadian vision, are undermined by a profound darkness that shadows much of what Sheers writes in the melancholy. Sheers presents poetry as the plight to grasp onto the dislocated and unstable, whether that be a literal struggle with the landscape or a spiritual grapple with self identity. In turn, melancholy is presented as the inevitable futility of these contests.

Sheers captures this instability and frailty in Skirrid Hill, as Sarah Crown points out, ‘(the landscape) is made up of “broken stone giving under our feet” and filled with “gap-toothed roofs and broken beams”‘. These ‘gaps’ become particularly apparent when exploring Welsh identity, as it is precariously perched between true heritage and the fragmented myths of ancient bards. The words, ‘broken stone giving under our feet’ from the poem Farther symbolise the fact that the intimacy between people and the land is being lost. This happens in Resistance; ‘a beguiling impression of both order and chaos, of studied construction and natural decay.’ In both works Sheers uses poetry and melancholic tones to show that, whilst the landscape might be our salvation, it is certainly not transcendent or immortal; this is deeply elegiac.

Poetry and Melancholy in Sheers Examination. (2020, Jun 02). Retrieved from https://studymoose.com/poetry-melancholy-sheers-examination-3883-new-essay 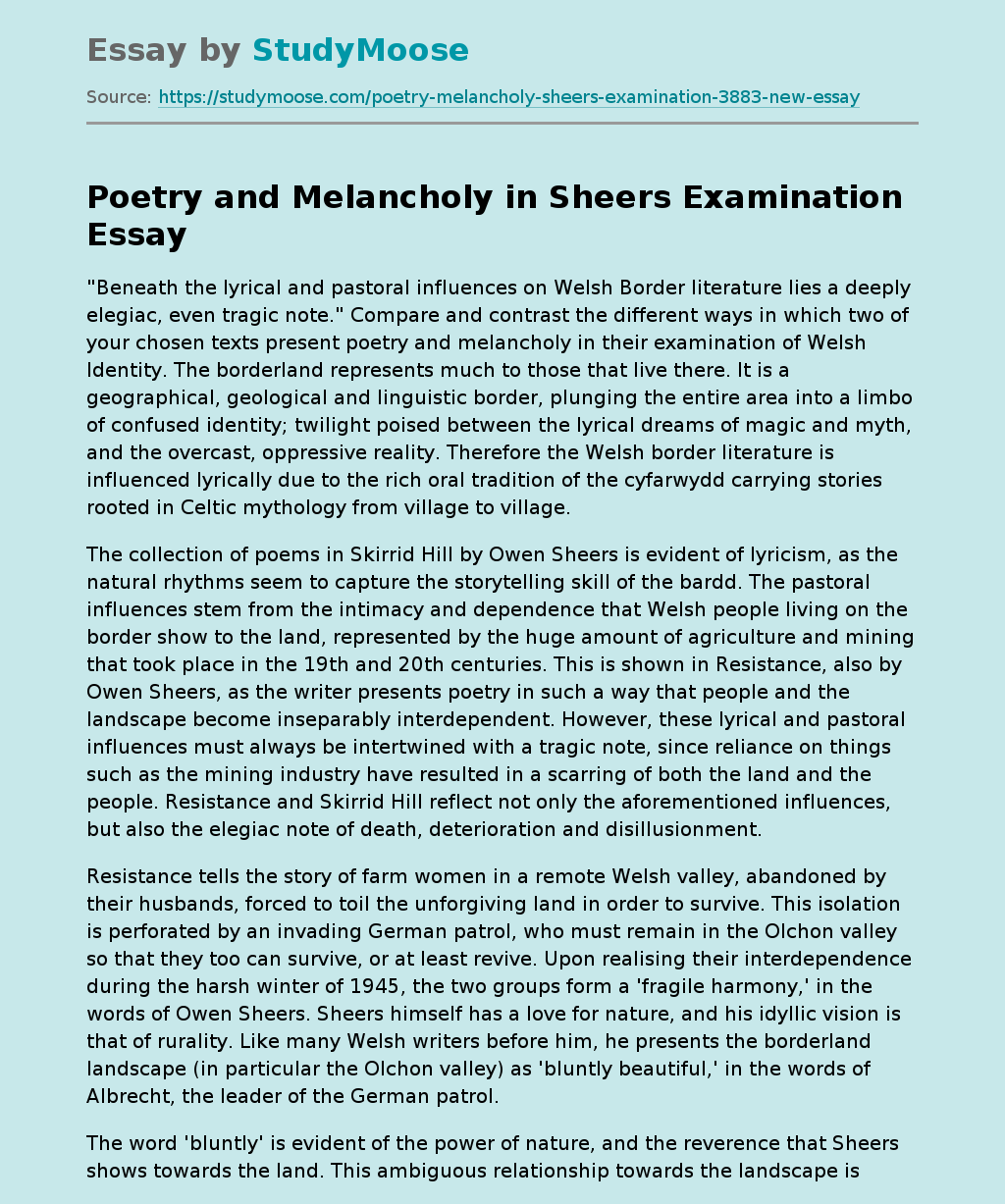