Everyone everywhere feels sadness. Whether it is everyday, or every once in a while, it is a feeling shared by all. In John Keats’ “Ode on Melancholy”, the poet expresses his views on the emotion and a mood of balance is conveyed with the help of the philosophy of the speaker, the language used and the overall message conveyed.

First of all, the perspective that the poet takes when viewing the subject of melancholy creates and supports the balanced atmosphere. The poet is the speaker and he is speaking to someone, everyone, suffering from melancholy.

Don't use plagiarized sources. Get your custom essay on
“ Ode on Melancholy – Commentary ”
Get custom paper
NEW! smart matching with writer

He is informing them about how to deal with their natural feeling. In the first stanza of the poem the poet dissuades the victim of melancholy from ignoring their sadness: do not commit suicide. He is telling the melancholy people how not to treat their melancholy.

He mentions that melancholy is so heavy and poisonous that ignoring it will only make it worse; victims have to abandon their negative-ness toward melancholy.

In the second stanza, he says that when melancholy strikes, one must embrace it – allow himself to feel it; this is the only way to deal with it. He is presenting possible ways to deal with the melancholy. The third stanza says that melancholy, beauty, pleasure and joy are linked. Only by feeling melancholy, can one feel joy, and vice versa. The poet’s philosophy on melancholy is that only by experiencing it and accepting it can one truly appreciate and recognize joy. This is the solution to the problem of melancholy – this is how one should treat their melancholy. Thus, the poet’s point of view on the issue of melancholies, based on a balance of emotions, helps evoke a mood of equilibrium.

Secondly, the language used in the poem also helps bring about a balanced atmosphere. The first stanza begins with “No, no, go,” low frequency, negative, gloomy sounds that evoke the feeling of melancholy. There are several negative images that follow. There is an allusion to Lethe, the River of Forgetfulness in Greek mythology. Other allusions to Greek mythology are Proserpine or Persephone, goddess of the underworld and Psyche who is commonly associated with the soul. The reference to Persephone reflects how Keats feels about melancholy. Like Persephone’s obligation to spend half the year in the underworld and the other on the face of the earth, melancholy can be seen as partly bad but partly good as well, since without knowing how melancholy feels, one would not know how joy feels.

Poisonous plants like wolf’s-bane, nightshade and yew-berries are mentioned – likened to melancholy. At the end of the first stanza, there are low frequency sounds on the words “anguish of the soul”. This draws out the line and puts emphasis on its meaning. In the second stanza there is a simile, likening melancholy to a cloud that has fallen from the sky – heaven to be precise. Heaven is a positive word, associated with where melancholy comes from in the poem. This juxtaposition of positive and negative images also helps to enforce the point that melancholy and joy are connected. Further evidence of this is the term “weeping cloud” that implies rain, which is usually associated with dreariness, but in truth it also nourishes – it “fosters the droop-headed flowers”. The mention of the “droop-headed” flowers is sad, but the nurturing of them is happy.

The mention of the word “rainbow” in line six of the second stanza adds even more reinforcement to this idea. The word “rain” has a high frequency sound – a happier sound, whereas the word “bow” has a lower frequency sound – a gloomier sound. On top of this, a rainbow requires both sun and rain to occur. The phrase “April shroud” also contains contrasts. “April” implies spring, life and happiness, whereas “shroud” implies death. Positive images that flood the senses are featured on lines five to seven. These counterbalance the negative images featured in the first stanza. There is a pun on the word “morning” in the seventh line – it could also be taken as “mourning” which is a contrasting word to “morning”. In the eighth line of the second stanza melancholy is personified. The poet refers to it as “mistress” and “her”.

The term “rich anger” is used. It is a paradox, and it enforces the idea of balance. In the last line of the second stanza, the words “feed deep, deep” are employed. They all contain high frequency sounds, which give off the feeling of energy, which contrasts the melancholy. The term “peerless eyes” in the last line is a pun since it could mean that no one can match those eyes, or it could also mean that the eyes are unable to perceive. The third stanza continues the personification of melancholy.

However, Beauty, Joy, Pleasure and Poison are personified as well. The poet says that Beauty, Melancholy and Joy go hand in hand in hand. The mention of the word “die” in line one of the third stanza is a negative image. There is an enjambment from line two to line three. The word “adieu” in line three of the third stanza also proposes a negative image. In line four of the second stanza, the word “poison” is used in conjunction with the term “bee-mouth”. The “bee-mouth” is a delicate image, whereas poison is a cruder one. On the last line of the poem the contrasting term “cloudy trophies” is used. Hence, the language employed in the poem, the balance of happy and sad, positive and negative helps create and maintain the mood of equality of the poem.

Finally the overall message that is conveyed aids with achieving the sense of balance present in the poem. The theme of the poem is that in life everything is balanced, to value joy, one must have encountered sorrow. In order to identify beauty, one must have seen ugliness. This is achieved through the paradox – Keats’ main figure of speech. This idea is reflected in the philosophy of melancholy presented by the poet. Everyone can relate to this since there are a lot of things in everyday life that people take for granted. The idea of karma is based on this. Therefore, the universal message conveyed by the poem revolves around balance, which helps enforce the mood of balance present in the poem.

In life it is important to have equal amounts of everything – good and bad. In John Keats’ “Ode on Melancholy”, an atmosphere of equilibrium is created with the help of the mantra on sorrow of the poet, the language used and the overall message conveyed. 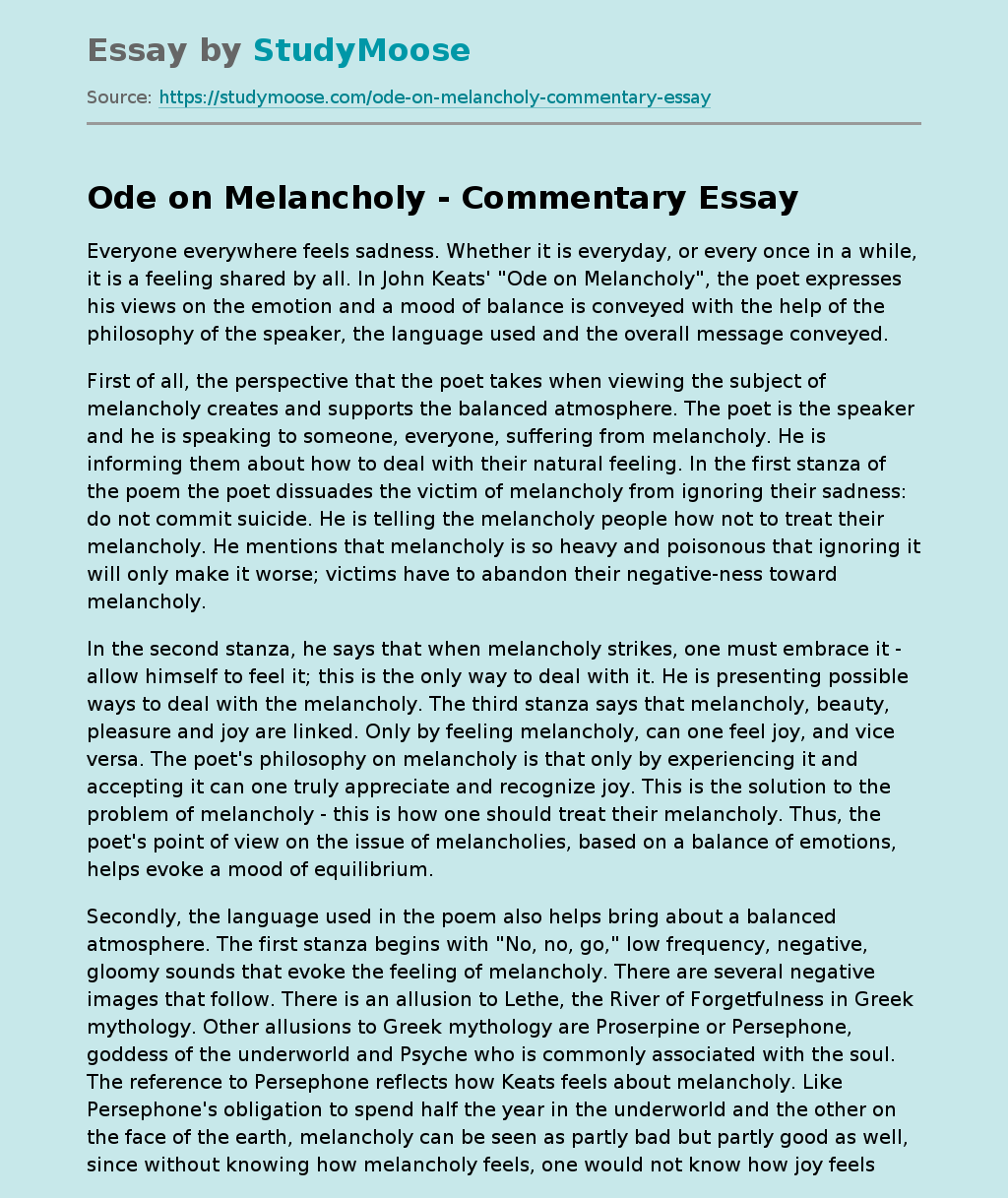