Inspiration From Nature in Keat's Ode to Autumn

Ode to Autumn has a very different theme and style in comparison to many of Keat’s other poems. While most of Keats poems contain sharp cadences and emotionally charged themes, Ode to Autumn is a calm, descriptive poem about Keat’s perspective of the season Autumn and its relation to other season. In the Poem Ode to Autumn, Keats mainly utilizes rustic, vivid, visual and tactile imagery to describe the scenes of Autumn. The varying and slower cadences along with personification develops a more majestic and complacent mood to the description.

Don't use plagiarized sources. Get your custom essay on
“ Inspiration From Nature in Keat’s Ode to Autumn ”
Get custom paper
NEW! smart matching with writer

The first stanza is mainly comprised of an explanation of the fruitfulness of autumn in terms of harvest and the remains of summer’s overflow of warmth. Keats even explicitly states “mellow fruitfulness” (Keats 44) which can refer to the direct connection of a fruitful harvest of fall crops or be indirectly referring to the happiness of family and life, which is a common theme of fall in that it is the last complete in a year.

People “load and bless” (Keats 44) for survival and support to survive the coming winter; Thanksgiving is also in the fall. As autumn provides great resources to all the people, the people also emulate the same idea. The common idea in this first stanza is the never-ending harvest and life in that autumn “swell[s] the gourd” (Keats 44) and completely ripens the fruit and is still set for “budding more” (Keats 44). In the first stanza Keats mainly utilizes flowing imagery with the heartfulness of autumn as a provider for all.

By developing a pastoral setting with “mossed cottage-trees” (Keats 44)and a plethora of fruits and vegetables, Keats further develops a scene of calming harmony between the season and all aspects of nature. Autumn is described as a season wherein the beginning, nothing seems to be ominous of anything but happiness. Since “summer o’erbrimmed their clammy cells” (Keats 44) Autumn is the perfect season that gets the correct amount of warmth and harvest.

The imagery of an overflowing glass of liquid gold (sunlight/summer) also alludes to the golden colors of nature in autumn, with the falling and changing colors of leaves. While summer has the pure sometimes harsh sunlight, in autumn, the warmth is a little subdued by the new coming “mist” of the cold. The diction of explaining the sun as a volume/ measurable thing allows the reader to feel its abundance. Keats uses classic ideas of food, warmth and growth, to captivate the reader in a possibly nostalgic or pleasing description.

In the second stanza Keats takes a turn in the aspect of autumn that he describes. In the first stanza autumn is described in more of a maternal character, who is all providing and caring for the creatures of the world with warmth, happiness and food. The second stanza describes a possibly younger character, who is more idle. Keats personifies autumn as a majestic woman who is “sitting careless on a granary floor” (Keats 44). Autumn’s majestic hair is lifted by the “winnowing wind” (Keats 44). This provides both visual and tactile imagery. It creates a peaceful mood in which everything is carefree. Again the reference to the granary floor alludes to a pastoral setting which adds to the fresh and comforting mood. This stanza with the “careless” autumn is a sharp contrast to the previous stanza in which autumn is a providing and profitable season. This stanza explains other possible areas to find autumn, or in other words, the second side of autumn’s personality. The resting and “sound asleep” (Keats 44) autumn foreshadows the hibernation of many creatures during the winter.

It shows the slowing down of activity as the cooler weather starts. This develops a complacent mellow mood. In the second half of this stanza Keats continues the complacent mood by referring to the effect of drugs from the “fume of poppies”(Keats 44). The hypnotizing effect of the poppies distracts autumn from taking (killing) all the plants as winter arrives. The change that comes with Autumn is gradual with it having “patient look” as it “watchest the last oozings” (Keats 44). The interesting diction of the last oozing further develops the slow tone of autumn’s progress. Sometimes autumn is a gleaner who takes all in its path but other times it is slow with its “laden head” (Keats 44). This may be dependent on the year of autumn. Sometimes it is harsh while other times it is temperate. The use of “laden head” (Keats 44) creates a heavy feeling that implies the slow progress of autumn. Autumn is just the time between the two major seasons- Summer and Winter- so, it can be described as a long period; its length is relative.

In the third stanza Keats develops a more demanding tone by starting out by questioning Spring. This is a slight consolation to Autumn, who may be
questioned about its specialty in comparison to the more “lively” season spring. There is an ode to Autumn but there is no ode to spring, and Keats is praising Autumn by telling it that “thou hast thy music too”(Keats 44). Again Keats describes autumn as a time of subtle change with the “soft dying day”(Keats 44). The unique description of clouds blooming the “soft-dying” days lightens the tone of the stanza. Clouds that bring more darkness are usually associated with gloomy weather and more solemn moods. However, by using a “spring” term- bloom- to describe the clouds, Keats lightens the mood of the darkening weather, allowing the reader to fell the pleasant nature of autumn. Until the last line of the poem, Keats continues to strongly use visual imagery to describe autumn with its “rosy hue”(Keats 44). Keats ends by developing a varied scene of several animals making harmonious noises. He shows the slight feeling of the onerous winter by the “wailful choir of the small gnats mourn” (Keats 44) but this is a small portion in comparison to the peaceful, rustic scene of the providing autumn that Keats paints throughout the poem.

Each stanza of Ode starts out with a ABAB cadence when it introduces the topic of the stanza and then shifts to a slower arrangement. A combination on this along with Keat’s descriptive imagery creates a complacent and welcoming mood to autumn. Using all this Keats explains the cyclic nature of the season alluding to life and death. All parts of the cycle have an important beautiful part.

Inspiration From Nature in Keat's Ode to Autumn. (2016, Mar 04). Retrieved from https://studymoose.com/inspiration-from-nature-in-keats-ode-to-autumn-essay 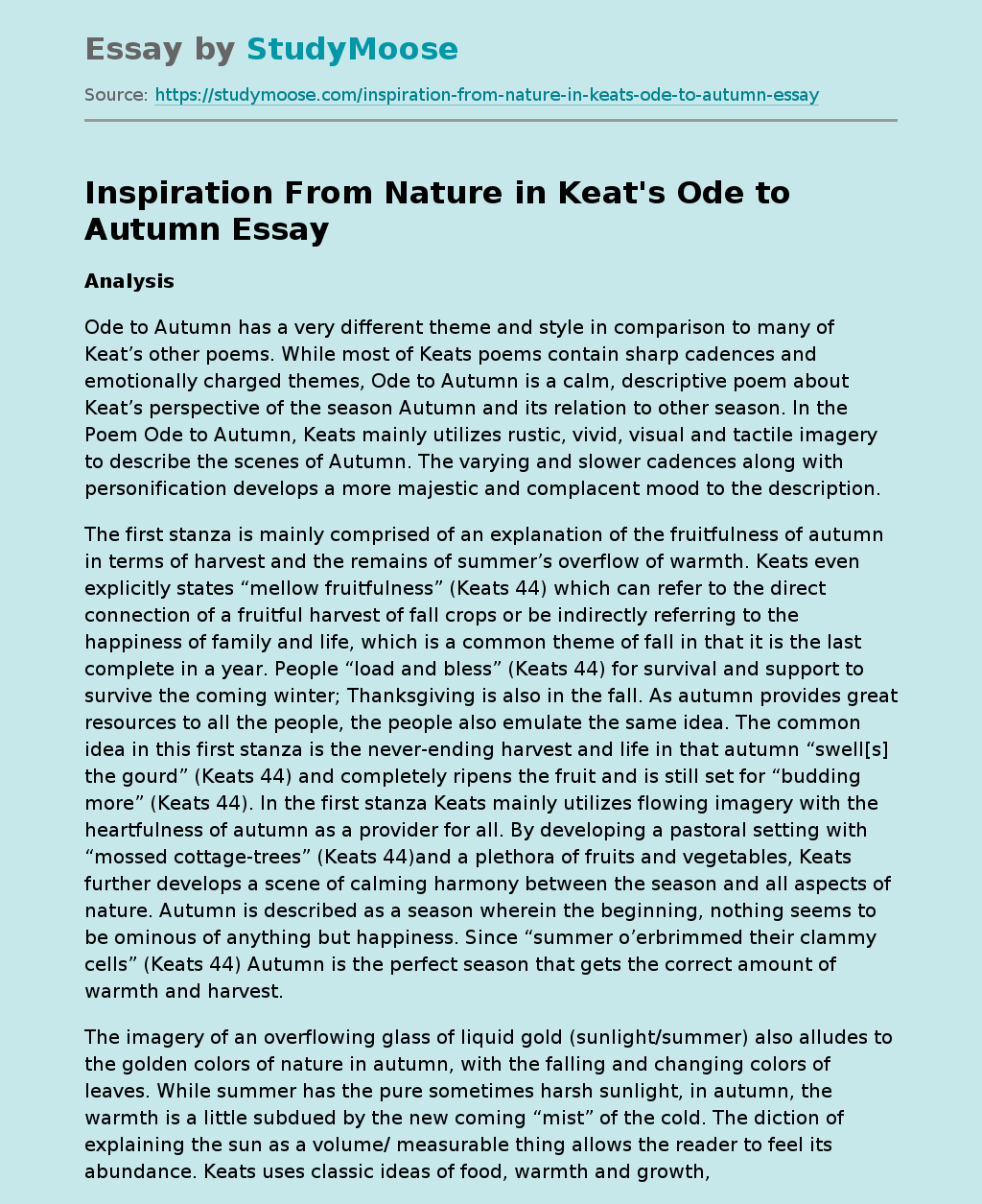