Plot and central idea in Shirley Jackson's "The Lottery"

Shirley Jackson’s, “The Lottery” concerns a small town’s annual lottery drawing and the grim circumstances that ensue. In this short but disturbingly profound piece of work, Shirley Jackson communicates to the reader the theme of scapegoatism along with its implications concerning traditions.

In the village where this lottery takes place, we find many familiar elements: a post office, a grocery store, schools and a coal mine. In this village, Mr. Summers owns the coal mine, so his business has made him the wealthiest man in the village.

Don't use plagiarized sources. Get your custom essay on
“ Plot and central idea in Shirley Jackson’s “The Lottery” ”
Get custom paper
NEW! smart matching with writer

Mr. Summers also controls the annual lottery. He is somewhat uncomfortable with his authority but has chosen to carry on with the yearly tradition.

The order in which the lottery drawings take place emphasizes who does and who doesn’t have power in the village’s social hierarchy. Men or working sons draw for their families. The few exceptions involve death or illness. Only then is a wife permitted to draw. It is evident that although everyone eventually participates in this drawing (children included), women are disenfranchised from the village social structure.

As the villagers anxiously wait for the lottery to begin, the young boys rough play and gather piles of stones, while the girls socialize in their circles, watching the boys.

Agriculture is the main staple of this village and a great emphasis seems to be placed on the bountifulness of crops. This is reinforced by Old Man Warner, a long time resident of the town, when he cites the expression, “Lottery in June, corn be heavy soon.

” There is timid talk by Mr. and Mrs. Adams of nearby villages doing away with the lottery, but the notion is quickly abolished when Warner calls these new thinkers “a pack of crazy fools.” He sarcastically suggests that perhaps they would be better off if they succumbed to living in caves and eating “stewed chicken weed and acorns.” As far as Old Man Warner is concerned, there has always been a lottery.

The last round of the lottery concludes with Mrs. Hutchinson drawing the slip with the feared “black spot.” As the town and her own family members move in on her with stones, she cries out several times, “It isn’t fair, it isn’t right.” Her cries go unheard and we are uneasily left to hope that the villagers were swift with their proceedings.

In this story, Shirley Jackson illustrates how traditions are passed down to our children, who tend to do what they are told without asking or knowing why. By the time we are mature enough to question morality, as long as it “isn’t fair” or “it isn’t right” to us, we are more willing to accept the condition of our surroundings rather than promote change.

Plot and central idea in Shirley Jackson's "The Lottery". (2016, Jun 28). Retrieved from https://studymoose.com/plot-and-central-idea-in-shirley-jacksons-the-lottery-essay 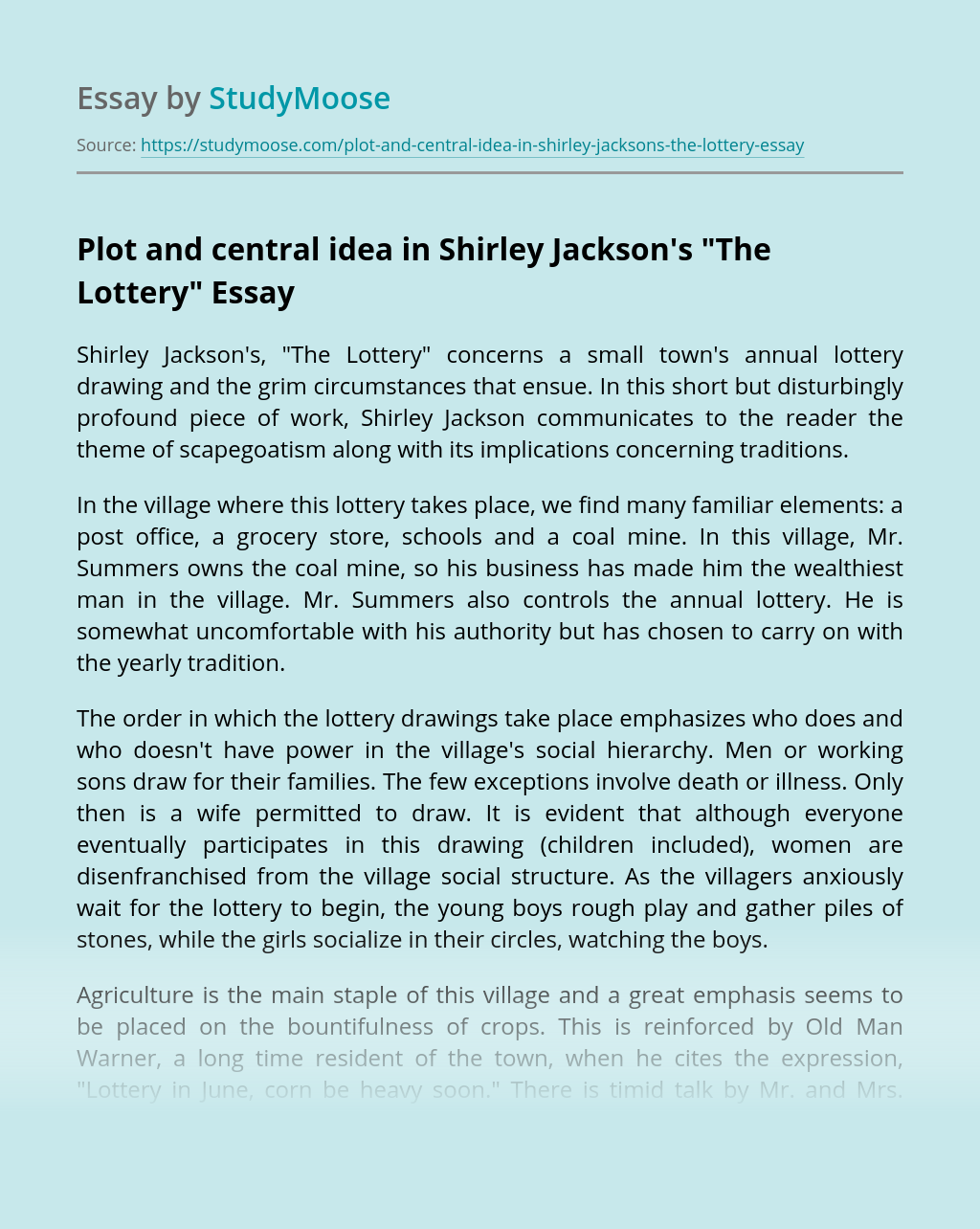