﻿Islands of Meaning by Zerubavel

The article illustrates how we mentally categorize things by segmenting and applying meaning to the world around us. This enables us to form ideas and opinions that aid in the development of society along with our own image of self. Our boundaries can be dependent upon our cultural and socioeconomic backgrounds influencing what is defined as normal or acceptable.

Frames are mental dividers that give a particular meaning to a group of objects that enables differentiation of individual objects thru generalized criteria.

Don't use plagiarized sources.
Get Your Custom Essay on ﻿Islands of Meaning by Zerubavel Just from $13,9/Page

Frames can be used to give contrast, separate and define items altering their meaning dependent upon individual experiences. The frames enable distinctions based on the context from which something is presented and viewed. The differentiation between a person riding a motorcycle might be viewed as an outlaw versus an enthusiast. Another example could be religious ceremonies implied meanings being based on those involved changing from Christian, Jewish, Muslim and so one.

The processing of information into partitions utilizes space, time, identity and mental fields as definitive criteria.

By giving meaning to nonphysical space allows the placing of boundaries that enable further categorizing of areas creating social boundaries. The distinction between doctors and nursing lounges within a hospital implies a separation of space and professions. The distinctive meaning given towards a section time allows separation by assigning of a special designation allowing for distinct classifications. The classification of the seasons having several months with all having different aspects that are unique to that particular time of year. The distinction of identity enables classifying us versus them that can be either a person singular or a group of similar individuals. The classification of a member of the military can be broken down to army to division to company to platoon to squad to individual soldier.

The sense of identity applied from one level to another creating a social cluster creating us versus them distinction. Mental fields are used to organize similar items from those that are dissimilar despite minor differences. By inferring the group with the same meaning it enables the objects to be interchangeable. The grouping of screws comprised of different metals and design (Phillips or straight head) used for different purposes still collectively known as screws. Ritual transitions are symbolic acts that make mental events appear more physical. The use of symbolic acts lends meaning to the crossing of an imaginary line or achievement giving a physical point of reference. When graduating basic training receiving a pin during a graduation ceremony marks the end of training and the beginning of being a soldier further solidifying the crossing of a barrier.

﻿Islands of Meaning by Zerubavel. (2016, Mar 01). Retrieved from https://studymoose.com/islands-of-meaning-by-zerubavel-essay 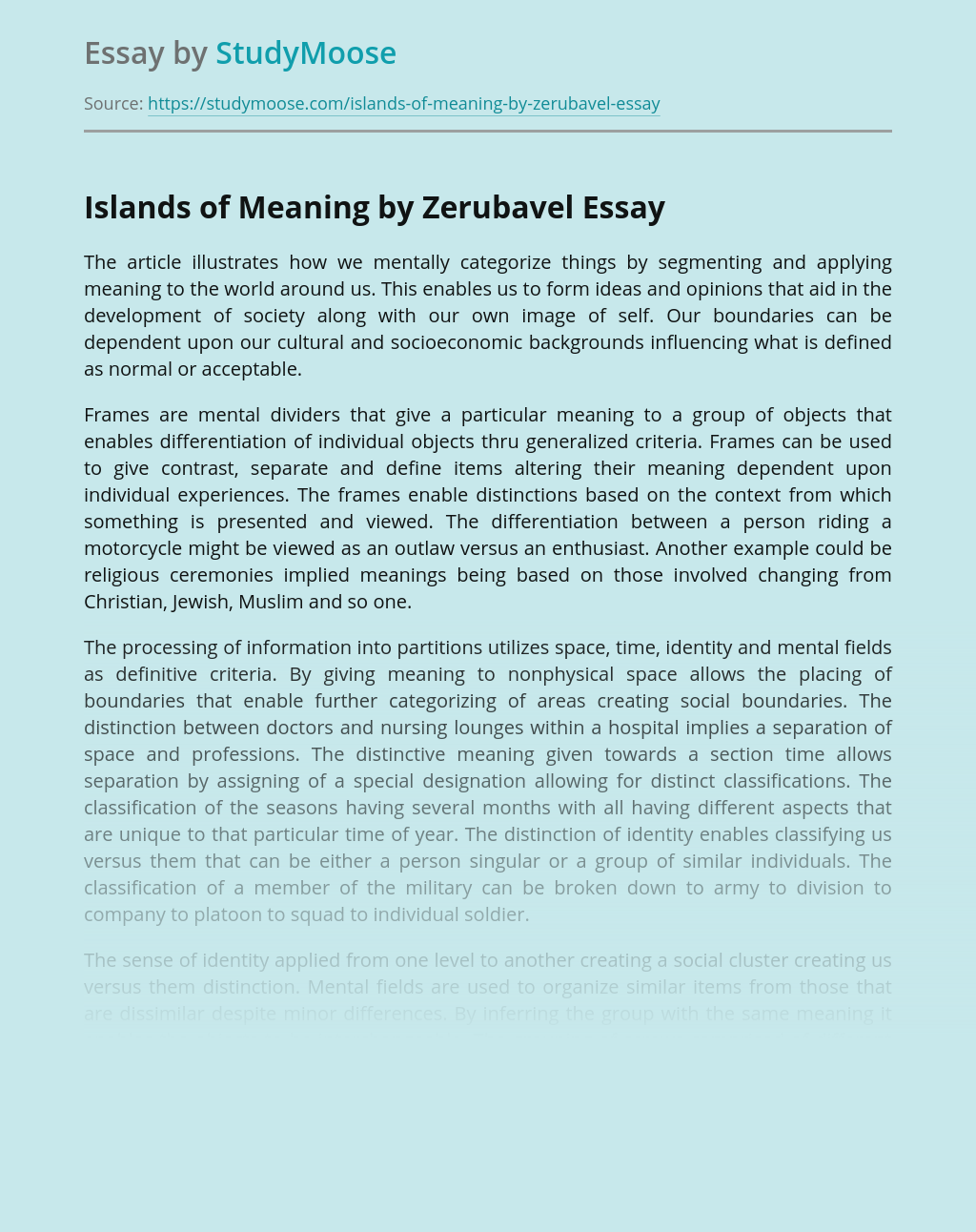 "My Grandmother Would Rock Quietly and Hum" by Leonard Adame

My Grandmother Would Rock Quietly and Hum by Leonard Adame is a remembrance of his grandmother who was an important part of his childhood. Through the memories of his dead grandmother he is able to show the readers his appreciation and love toward the beloved and kind Mexican deceased. The poem has amazing imagery setting,...

This short story talks about some bizzarres events that happen to a man that is studying to become a Spanish teacher. First off all, the main character witness that his neighbor, Don Cesareo, who is an old man that has bad temper and cares a lot about his garden, accidentally murders a beggar, who insists...

Nha Trang, a coastal city and capital of Khanh Hoa Province on the South Central Coast of Vietnam, is a famous destination for traveling and relaxing. It’s one of the most important tourist hubs of Vietnam. With such natural gifts as the position, landscape, climate, together with its rich background in culture and humanities, Nha...

Suffering Innocence in To Kill a Mockingbird

The fascinating story To Kill A Mockingbird takes place in a sleepy, southern county of Maycomb in the 1930s. Although this town has a variety of pleasant and honorable citizens who have set morals, there are also people who live in Maycomb County who are unfair, possibly evil, and lack morals. Maycomb has a visible...